You are here: Home / Solo Travel Destinations / Europe / Italy / A Day Trip to Parma and the Source of Parmigiano-Reggiano 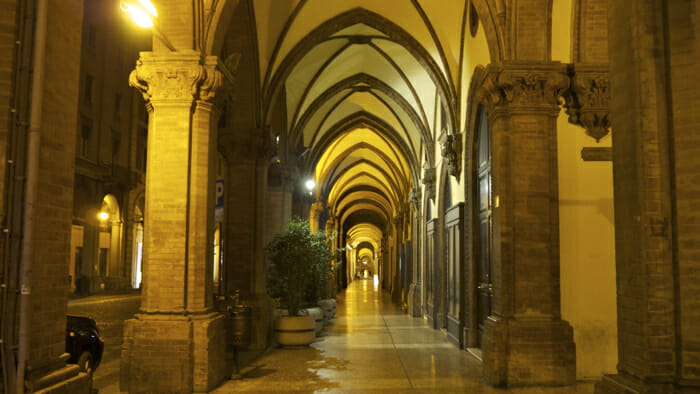 We set out early in the morning, before the sun was up.

We set out before the sun rose.

I was with Patricia, a Brazilian travel blogger whom I had met in Bologna. We had already seen the origins of Aceto Balsamico Tradizionale di Modena. This time we were taking the train to Parma, following our tastebuds to the source of the Emilia-Romagna region's famous cheese.

Parma has ham as well, of course, but being vegetarian this was not of interest to me. Incidentally, as you will see further down, there is much more than food in Parma. 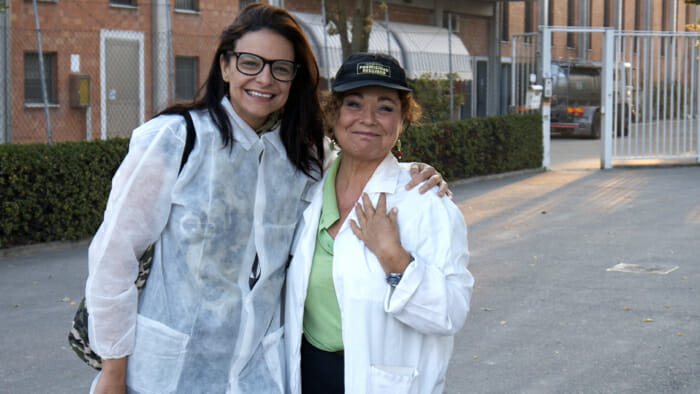 Patricia and our guide.

In most cases, a cheese producer is a company that buys milk from many farmers and makes cheese. In the case of Parmigiano-Reggiano, the farmers are the producers. The facilities and cheese makers are owned and managed by a cooperative of farmers. The reason for this is terroir. 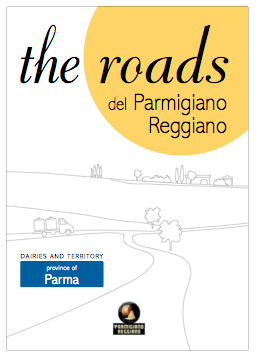 Terroir refers to the unique properties that the geography, climate, geology, and plants… of a place have on the taste of food. The terroir of one farm is different from another and, therefore, the milk of the cows on those farms and the cheese that is produced from that milk is different as well. The difference may be subtle, (not necessarily something that I can detect) but it is there and this is why the farmers are the producers. In the production process, milks from the different farms are not mixed together. Each goes into a separate vat. Each is tracked through the production process. This is the difference between Parmigiano-Reggiano which is monitored by the Consorzio del Formaggio Parmigiano Reggiano and parmesan from manufacturing facilities.

To learn more about Parmigiano-Reggiano and the free tours that are available you can download this booklet from the Consorzio here.   The dairies are located out of town but you can arrange for a taxi to pick you up from the train station and take you there. 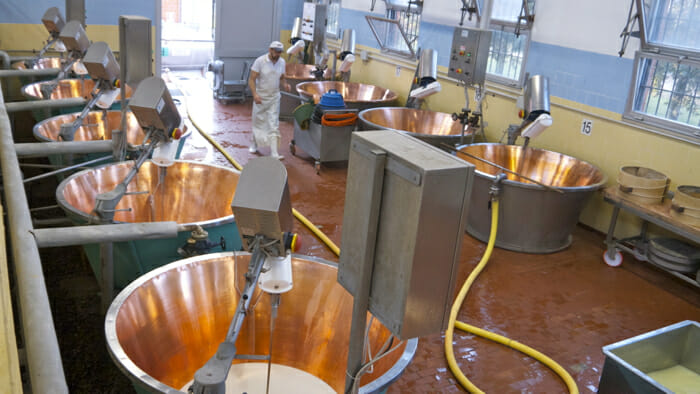 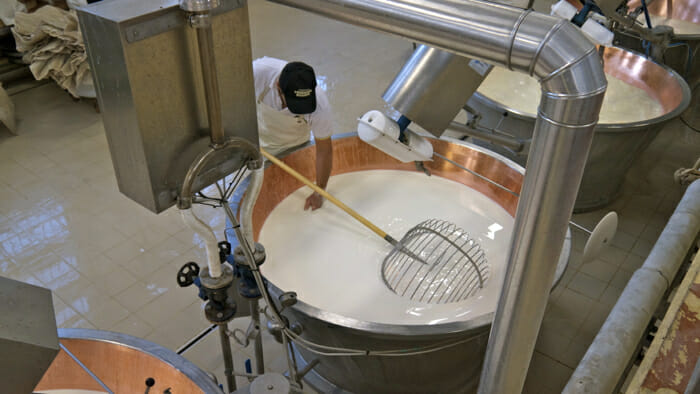 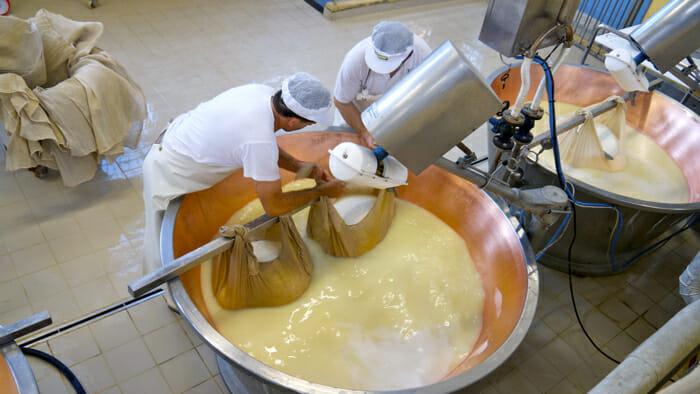 The curd and the whey separates resulting in a mound of cheese at the bottom of the vat. This is cut in two and the two are referred to as twins. 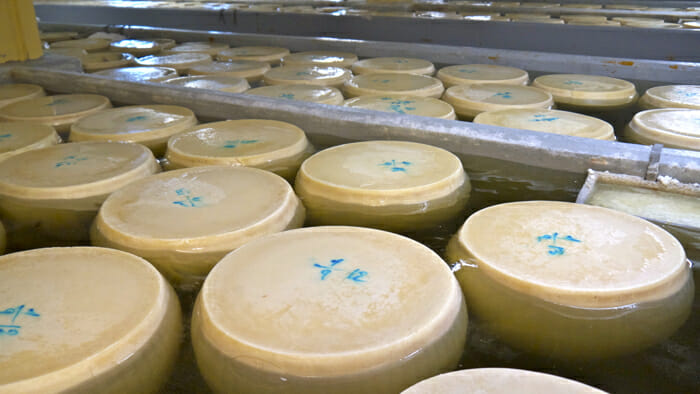 The cheese is set in a brine bath to absorb salt for 20-25 days. 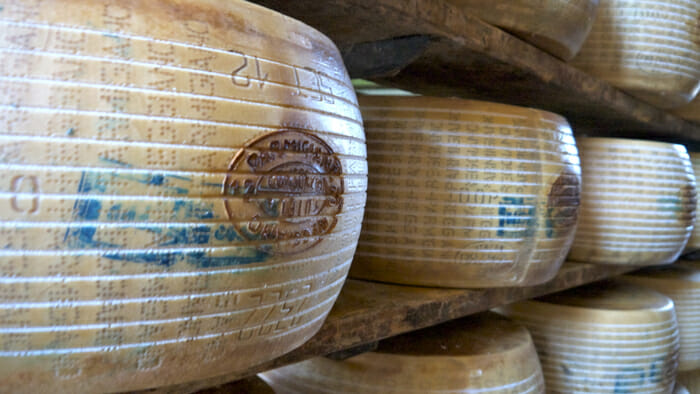 Only the best wheels make the grade. If a cheese does not pass inspection, grooves will be scraped into the sides showing that it is second quality. If it doesn't meet that status, the side and stamp will be scraped off completely.

History at the Palazzo della Pilotta and the Teatro Farnese

The town of Parma is small and quaint and has much to offer besides cheese . We focused on the old city center where the Palazzo della Pilotta which was built in the 1500s is located. The Palazzo holds the National Archaeological Museum, the Scuola d’Arte Toschi, the Palatine Library, the Museo Bodoniano, the National Gallery of Parma and the Teatro Farnese. Yes, there’s far too much there for one day.

I focused on two things. Before entering the Palazzo I was taken with its exterior. As you can see below, the building is nicely finished but it doesn’t make sense. What wasn’t there was a hint as to what once was and what might have happened. A bit of research revealed that the building was badly damaged during World War II. I soon learned that the Teatro was as well. 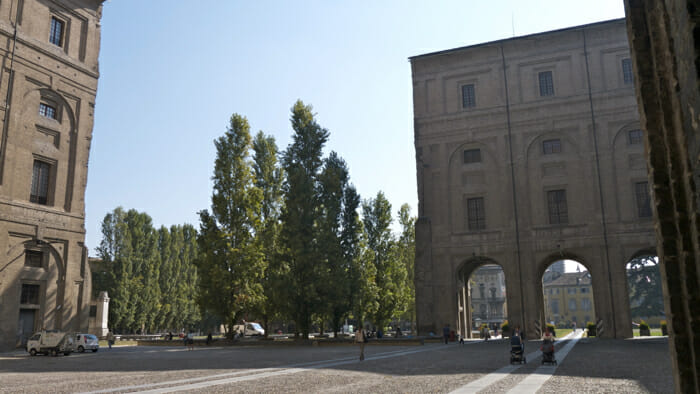 What's missing? The Palazzo della Pilotta was hit badly during the war. Sometimes you have to look for what's missing to see the history of a place.

But what I saw when entering the Teatro was an elegant Italian Baroque theater in perfect condition. It was rebuilt and reopened in 1962. Some consider this to be the first proscenium arch theater which is our standard theater architectural format today. It contains the action on the stage inside a frame so that  what divides the audience and the stage  is a sort of 4th wall, as it is known. I had never thought of there being a first proscenium theater before. Standing in this magnificent space, breathing the air of centuries of theater  felt  magical. Alas,  it was rarely used as a theater but rather, on occasion only, for ducal marriages and state visits. 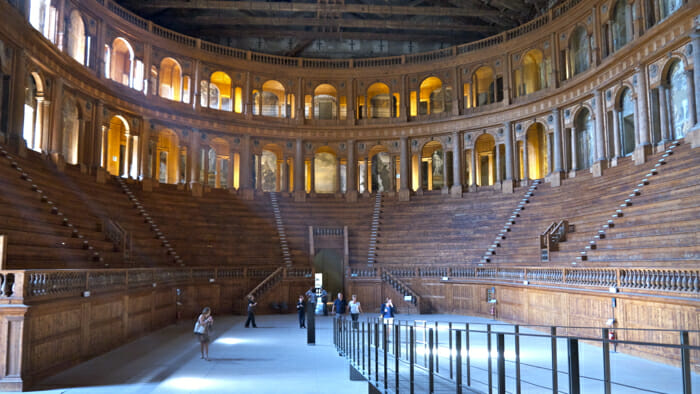 The interior of the Teatro Farnese. You enter through the Palazzo della Pilotta. 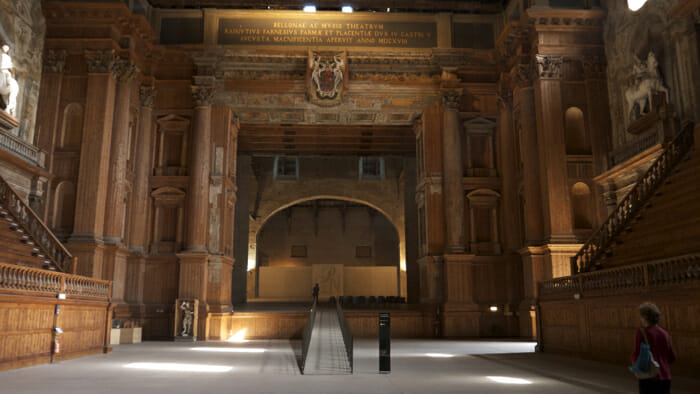 View of the stage. 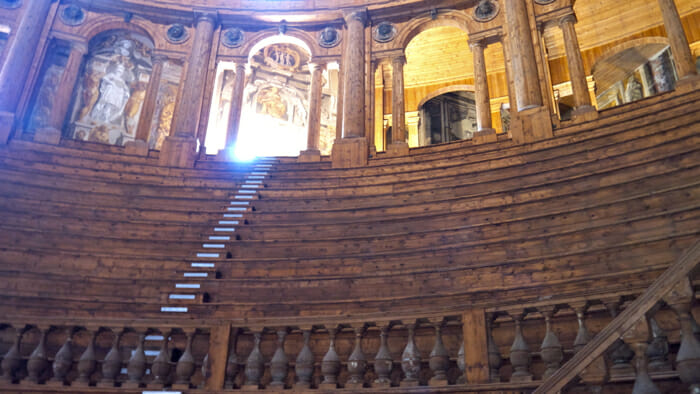 The Teatro has been beautifully restored after being hit during the war.

Our final stop on the day tour of Parma was to The Birth Place Museum Toscanini. It’s a small museum and only requires  an hour of your time. It’s also very quiet. When we were there, it was only us and a family  which arrived shortly after us. As a result,  all of us received special treatment as we were given an especially extensive tour through the museum and given details of the great conductor’s early life. 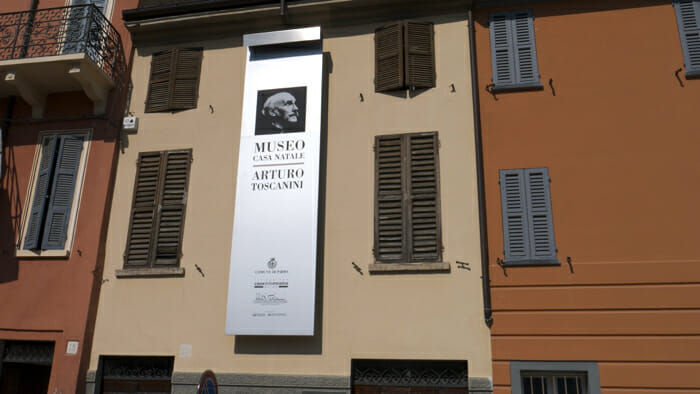 The Birth Place Museum of Toscanini. 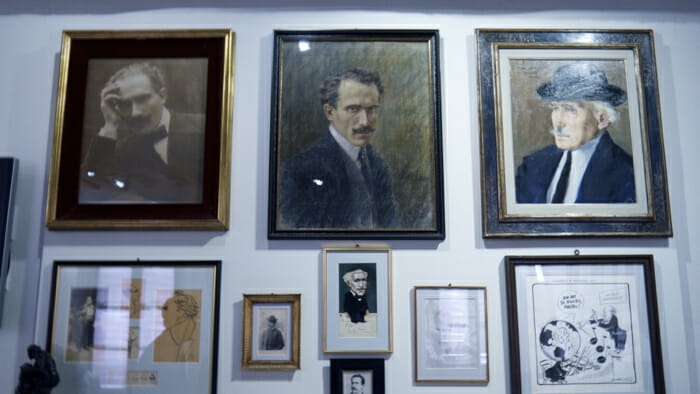 A wall of Toscanini portraits. 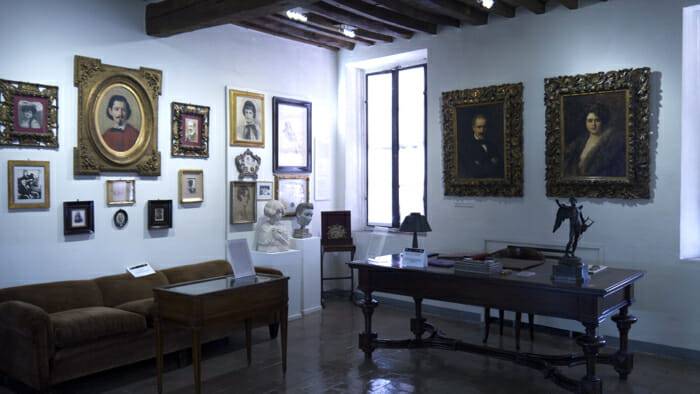 A room in the museum.

My thanks to the Emilia-Romagna Tourism Board here for supporting Blogville – a place for bloggers to stay while exploring the region. You can read what other bloggers have written about their stay here.

Get lots more on the Emilia-Romagna region from this ebook.