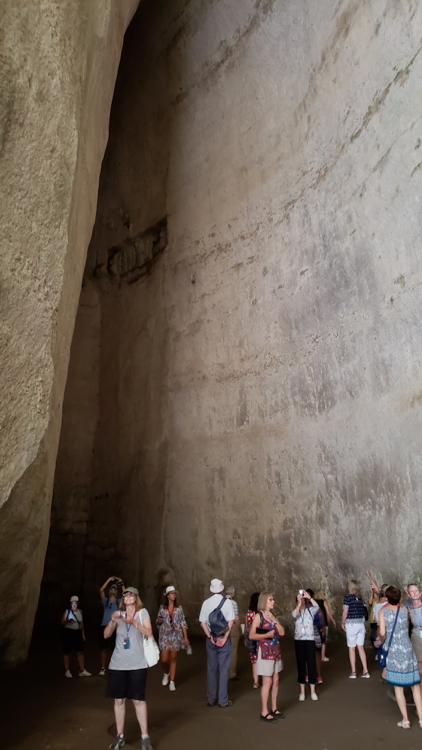 In the Ear of Dionysius, at the Archeological Park in Syracuse, Sicily.

I was delighted and somewhat surprised by the number of ancient sites in Sicily.

However, I was surprised to discover so many Greek ruins in Sicily. Until this trip, I had thought of the Greek Empire as covering Greece, western Turkey and the islands of the Adriatic. Sicily is far west of these and yet it was colonized by the Greeks in the late 8th century BCE.

I first visited Sicily 16 years ago. Then, I was with my husband and eleven-year-old son and we were taking a break at a resort after months of being on the road. This time I was traveling as a guest of Just You, a tour company that caters exclusively to solo travelers. All 25 people on the trip were single. Or, at least, single for the duration of the trip.

Syracuse was Greece's most important Sicilian city. Apparently, Cicero called it “the biggest and most beautiful Greek city.”

So, Syracuse is where I'll start my review of three ancient Greek and Roman sites in Sicily. 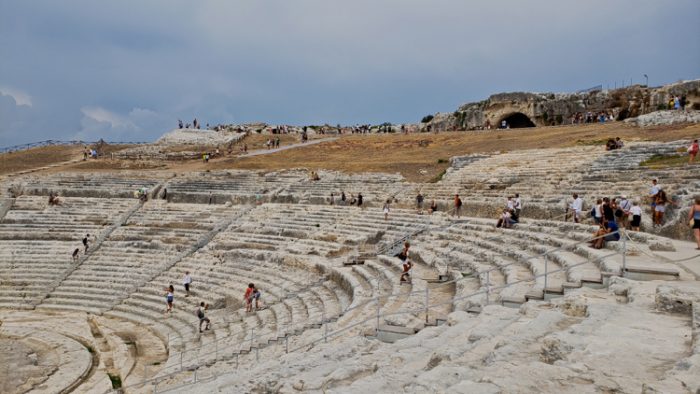 The Greek theater at the Neapolis Archaeological Park in Syracuse was used for theater, unlike the Roman amphitheater which is also within the park. It was used for more violent entertainment like gladiator combats and animal slayings.

The entire city of Syracuse along with the Neapolis Archaeological Park was designated a UNESCO World Heritage Site in 2005. The archaeological park features mostly Greek ruins. The highlights are the semi-circle Greek theater and the Roman Amphitheater. When the Romans took over the ancient city of Syracuse, the Greek theater didn't suit the Roman taste for violent entertainment. They wanted an amphitheater, a stadium, which is better for gladiator contests and fights with wild animals. The Greek theater continues to be used today, most notably for an annual Greek Theater festival held from mid-May until the end of June.

From the Archaeological Park, we headed to the Ortigia, an island and the historic center of Syracuse. A short walk across the bridge to the city center and we were introduced to Apollo's Temple and then the Temple of Athena (modified over the years and now the Syracuse Cathedral). After our guide explained the ancient history of these sites we were given free time to wander the city and enjoy lunch along the waterfront.

Then it was back to the resort, dinner, and dancing on the patio overlooking the ocean. A fun evening! 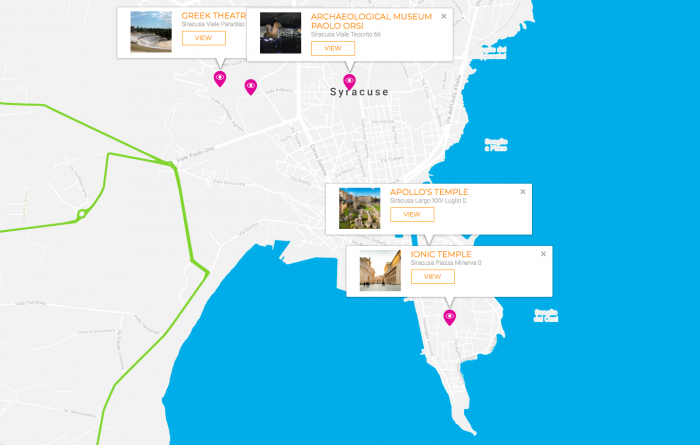 The city of Syracuse and the Neapolis Archaeological Park are a designated UNESCO World Heritage Site. As the map shows, the Greek Theater which is in the archaeological park is quite a way from the city center. It was made easy by our local guide and transportation. 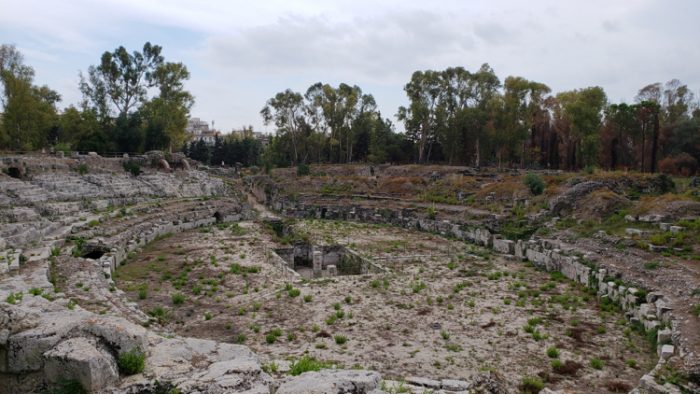 The Roman amphitheater was used for blood sports such as gladiator fights. 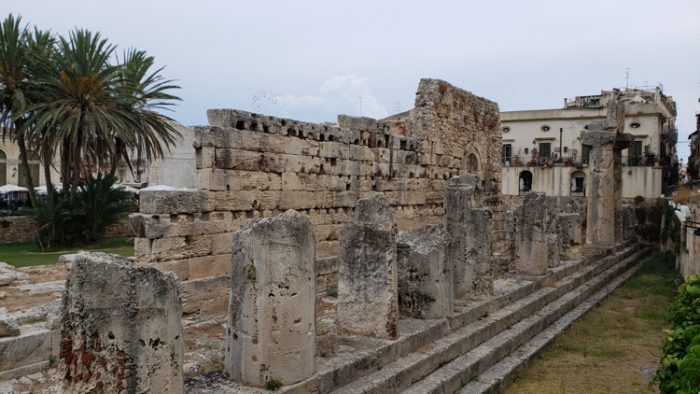 Remains of the Apollo Theater in Syracuse. 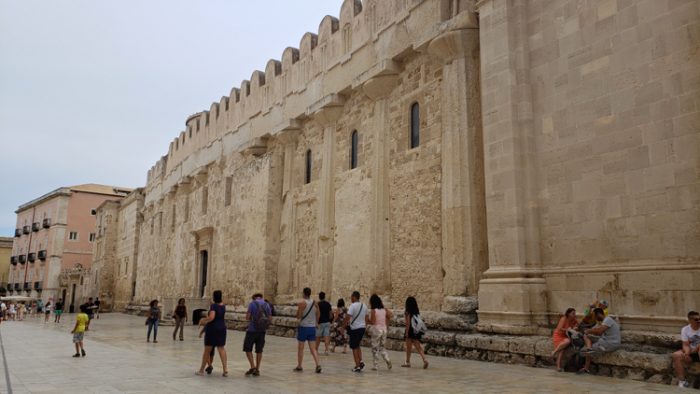 This is my favorite cathedral in Europe. I have never had a favorite before but now I do and I will write about it in its own post soon. From this angle you can see the Doric columns from when it was the Greek Temple of Athena. 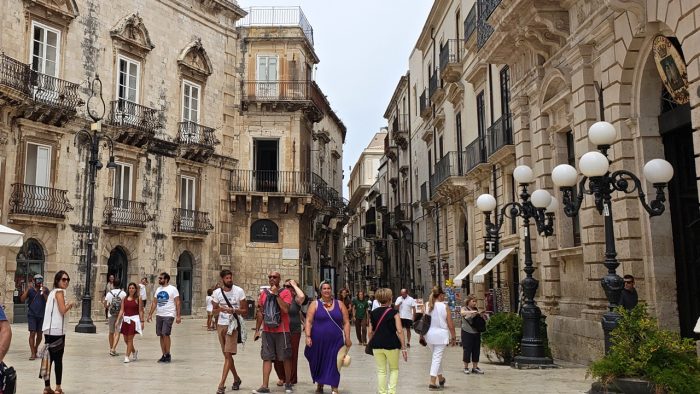 Free time to wander Syracuse and… 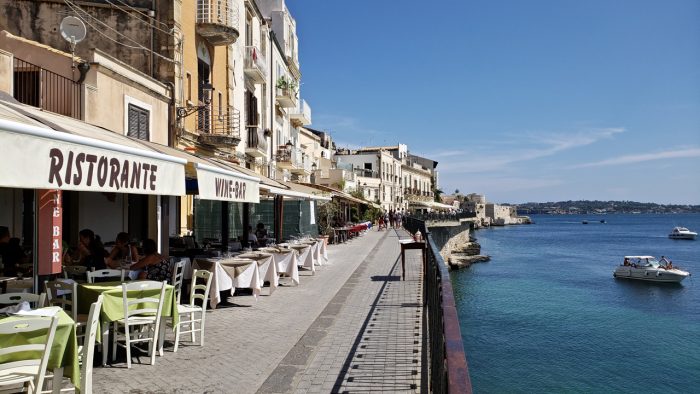 … have lunch by the sea. 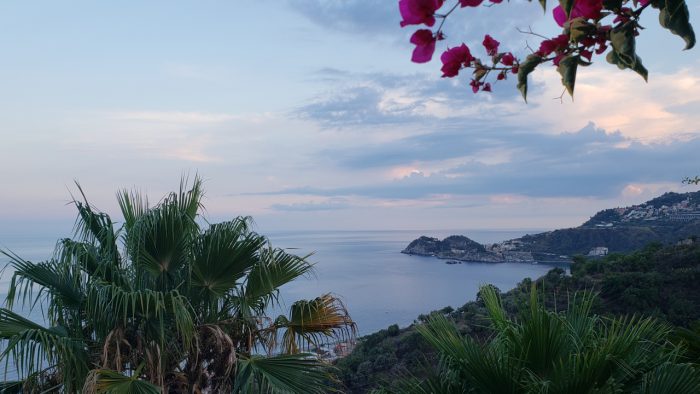 After a day of visiting ancient Sicily we were back into the present at our resort for dinner, a beautiful sunset, and dancing to a live band. This photo has not been touched up at all!

Almost entirely covered by a landslide in the 12th century and cultivated for crops for centuries thereafter, Villa Romana del Casale, a 4th century Roman palace was rediscovered and, in fits and starts, developed as an archaeological site in the 19th and 20th centuries. Located near the city of Piazza Armerina, it wasn't until the 1950's that this site, one of the richest, largest, and most varied collections of Roman mosaics in the world, underwent major excavations.

Those are the basic facts of the Villa. Let me tell you how the Villa feels.

The Villa was likely owned by one of Rome’s senatorial class. A visit evokes the lives of this elite class and the people who visited them. At the entrance you first encounter the thermal baths and spa complex. From there you move inside to the living area and guest rooms, the private rooms of the owner that includes a basilica where the owner would greet his guests, a dining area, and a courtyard with fountain. Our local guide gave us lots of detail on the Villa's history.

After the visit, we moved on to our second resort, even better than the first. 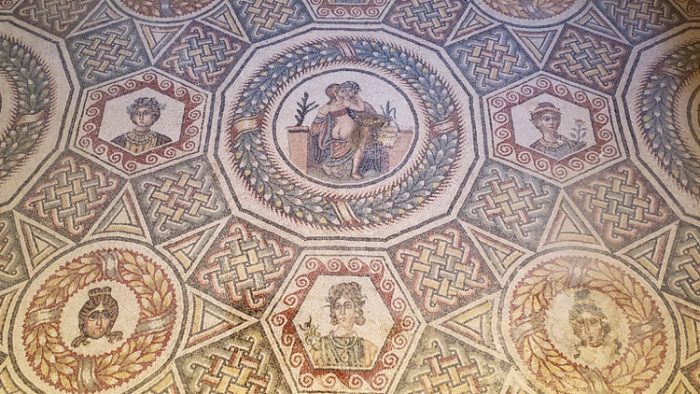 The landslide that covered the villa in the 12th century protected many of these incredible, ancient mosaics from destruction. This one is almost entirely intact. 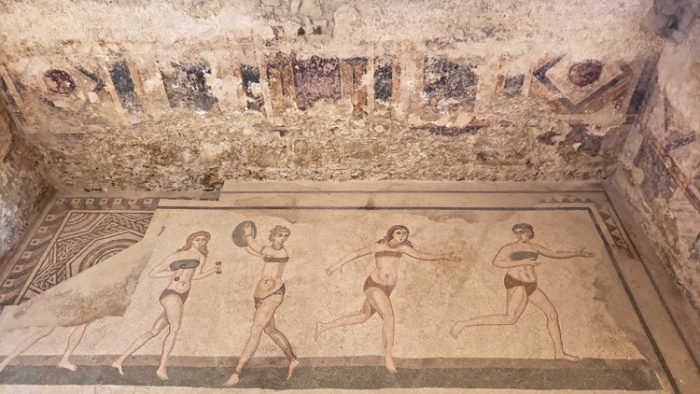 Many of the rooms in the villa revealed what the rooms were for or the values of the villa owner which is under debate. In this room you can see in the top left corner the original floor that was in this room. For some reason the owner chose to add a new floor with the women doing gymnastics in bikinis. 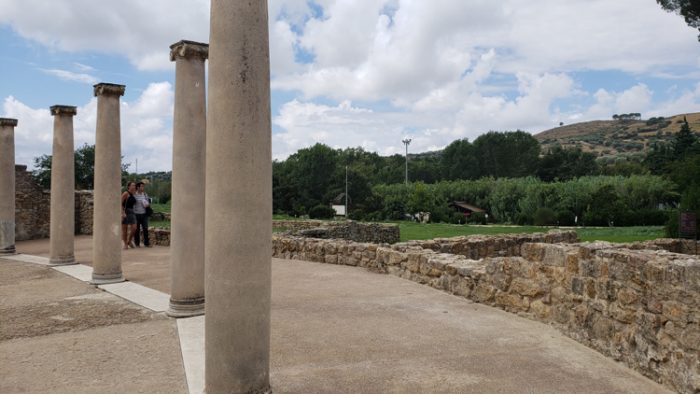 A view of the countryside from the gardens. 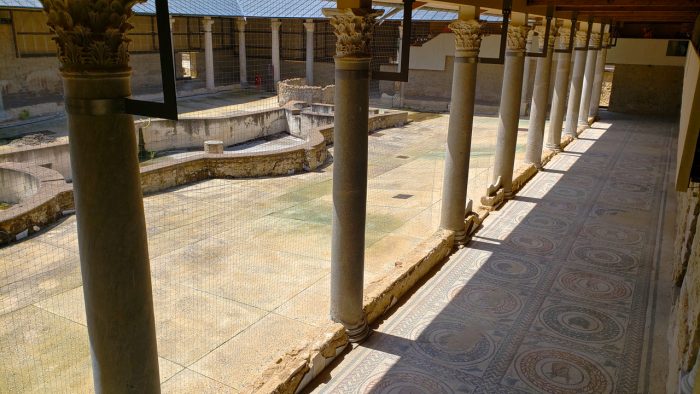 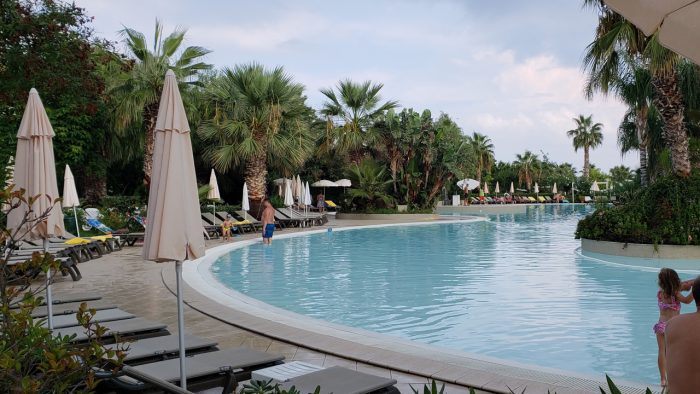 Our resort, the pool, and the sea plus delicious food and the traditional Aperol Spritz, all awaited us at the end of the day.

The Valley of the Temples

Oddly, one does not experience this archaeological park like a valley. It is more like a ridge with views of Argrigento and the sea to the south and sweeping landscape views to the north. Walking down the road, passing almond and olive trees and one very friendly goat, one also passes eight temples built between about 510 BC and 430 BC.

There are temples for Hera, Concordia, Heracles, Olympian Zeus, Castor and Pollux, Hephaestos, Demeter, and Asclepius. Our guide had stories about each and on many we could see modifications made by conquering civilizations.

There was lots of learning on this trip with exploration of the ancient sites in Sicily balanced with time to relax at a resort. 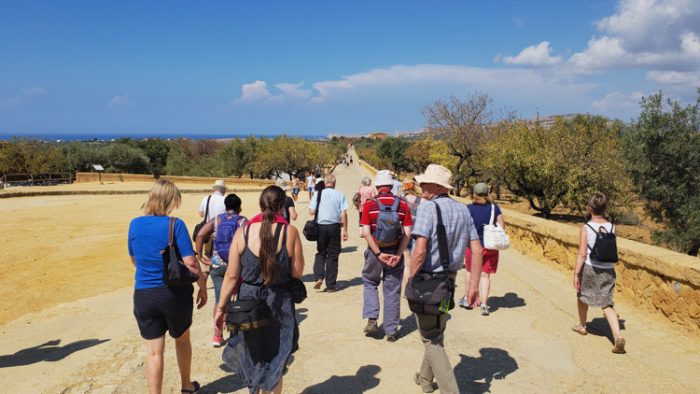 Our group following our guide in the Valley of the Temples 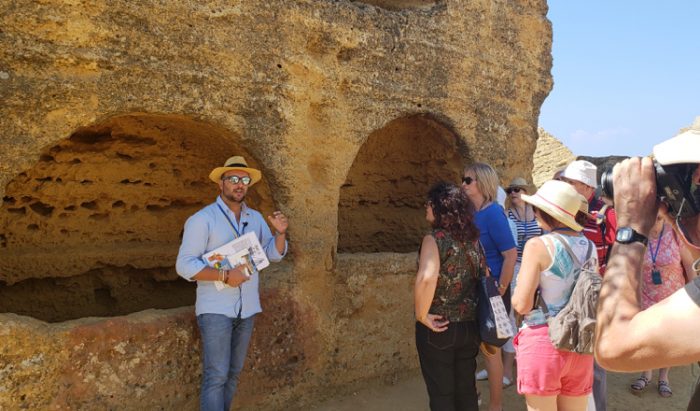 Our local guide was an forensic archaeologist specializing in the analysis of bones. Here he is standing in front of burial sites and explaining what and how they learned from these sites. 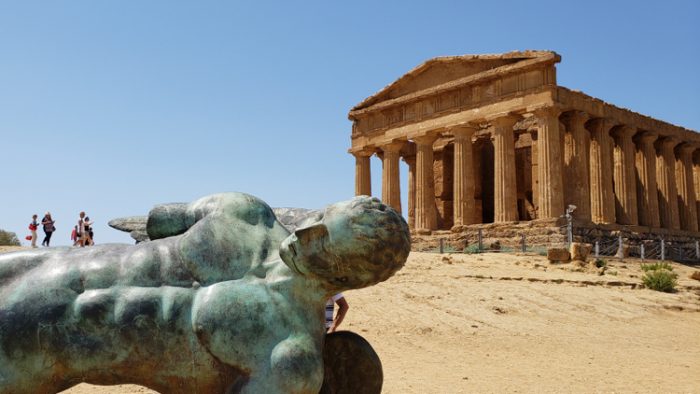 The Temple of Concordia with a modern statue of Icarus in the foreground. 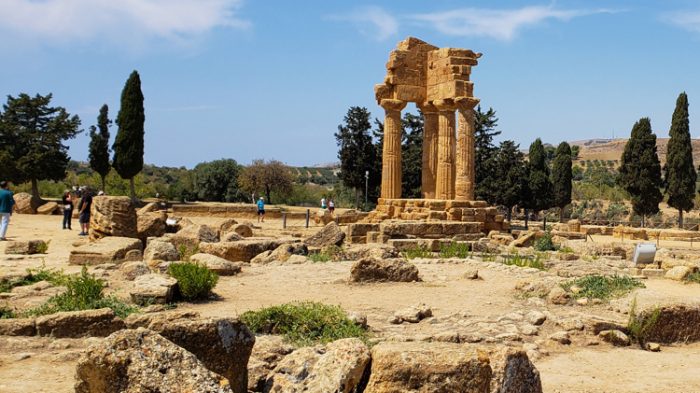 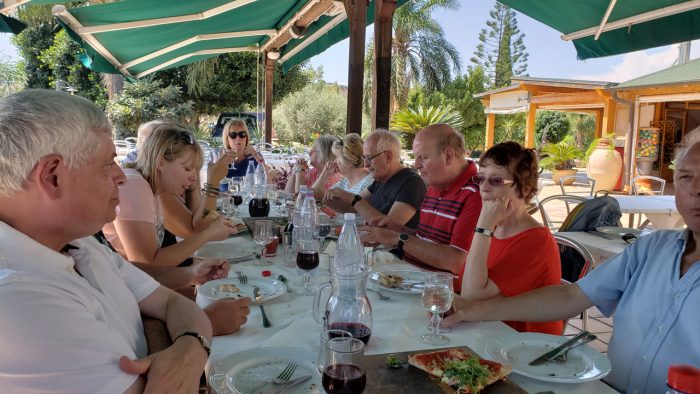 Our pizza feast. We started with bruschetta, then came the pizza, in waves, three kinds. Delicious!

You can read more about this trip in Solo Traveler on a Solos-Only Tour.