You are here: Home / How to Travel Alone / A Solo Point of View / Blind Solo Traveler: A Sense of the World 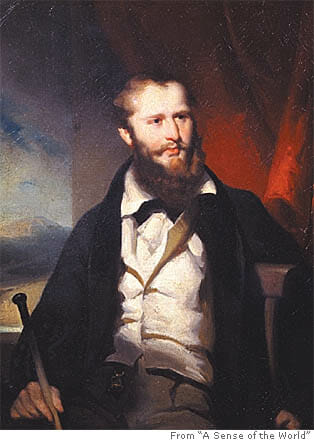 James Holman was a 19th century English Gentleman who went totally blind yet traveled around the world solo. His is a remarkable tale told by Jason Roberts. I'd like to thank Jason for giving me permission to publish this summary of A Sense of the World. You can learn more about him at his website

He was known simply as the Blind Traveler—a solitary, sightless adventurer, who fought the slave trade in Africa, survived a frozen captivity in Siberia, hunted rogue elephants in Ceylon, and helped chart the Australian outback. Once a celebrity, a bestselling author, and an inspiration to Charles Darwin and Sir Richard Francis Burton, the charismatic, witty James Holman outlived his fame, dying in an obscurity that has endured—until now.

A Sense of the World is a work of narrative nonfiction. It tells the story of James Holman, who led one of the most astonishing lives of the nineteenth century.

Born the son of an apothecary in Exeter, England on October 15, 1786, he grew up dreaming of seeing the world. His father, however, had other plans for him. It was not until a scandal swept through his school that young James was hastily placed in the British Royal Navy, in 1799, at the height of the Napoleonic Wars.

Five years later, he was a rising young officer. But in his shipboard duties he contracted a mysterious illness, one that left him in debilitating pain–and eventually, completely blind.

He was honored as a war hero, and given lifetime lodgings in Windsor Castle itself. But he was just 27, and he rebelled against the notion that his life was effectively ended. The doctors could find no cure for his blindness, so he went to Edinburgh and studied medicine himself.

When the permanence of his condition became clear, he found that only one thing could minimize the pain and keep depression at bay: the act of placing himself in entirely unknown surroundings. So he wandered off, traveling entirely alone. First to Europe, then to Russia, then to every inhabited continent on the planet.

He knew no foreign languages, had almost no money, and carried little more than a primitive writing machine. Yet, he also had a prodigious memory, hyper-acute remaining senses, and vast amounts of personal charm. He wrote seven volumes of travelogue, became a bestselling author and a fellow of the Royal Society, celebrated and commemorated as “the Blind Traveler.”

His wanderings left their mark on history. The Holman River in Africa was named in his honor. In China, he was one of the first Westerners to warn of the growing class conflict that culminated in the Taiping Rebellion. His accounts of indigenous cultures in Zanzibar, the Seychelles, and Madagascar are still prized by modern-day anthropologists.

He also had his share of adventures. In Africa, he helped launch a doomed effort to fight the slave trade. In Ceylon, he hunted rogue elephants on horseback. In Siberia, he was arrested and held as a spy (they didn’t believe he was truly blind). 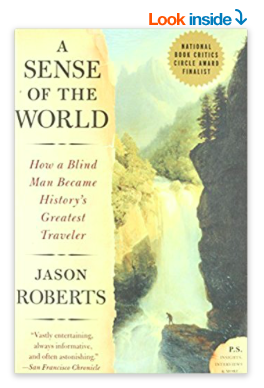 Sadly, he outlived his fame. Long after the public had dismissed him as a novelty, he kept on traveling. He had no choice–as his doctors concurred, his mysterious affliction only responded to a regular “change of air and scene.” His books fell out of print, his new writings went unpublished, but he kept going–always alone, always trusting to fate and the innate benevolence of humanity. By the time of his death at age 70 he was the most accomplished traveler of all time–a record that would stand until well into the 20th century.

Those are just some of the highlights. Rest assured, it’s an interesting story, one that has been my honor to retell, a century and a half later. It’s tragic that this awe-inspiring gentleman has fallen into obscurity, and it’s my hope that A Sense of the World will begin the process of restoring James Holman, the blind solo traveler, to his rightful place in our cultural consciousness.