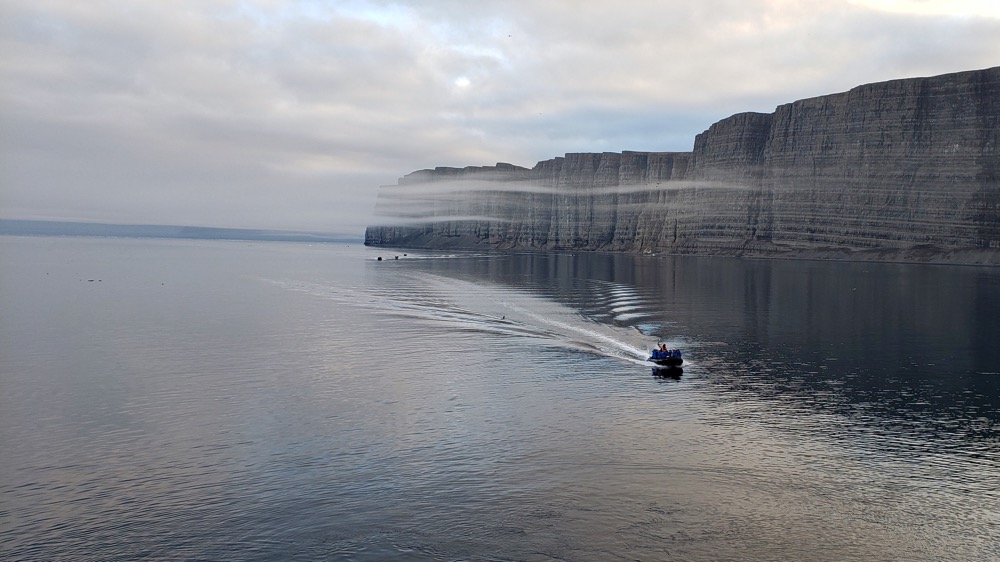 Our first attempt to Beechey Island was not possible due to ice so we re-routed to Prince Leopold Island and it's Migratory Bird Sanctuary. The cliffs in this photo host masses of birds. The boat is one of the zodiacs used to shuttle people from the ship to our destination.

For seven days, we sailed through the Arctic without seeing another ship or people other than those with whom we were traveling.

There were landings each day for exploration. Animal sightings from the ship could happen almost any time for the sun never set.

We were incredibly fortunate on this Adventure Canada expedition to have calm seas, vast blue skies, and incredible resource people from just about every discipline imaginable, including Inuit as cultural interpreters, to help us understand the Arctic. We had amiable, knowledgeable passengers as well, 27 of whom were solo travelers.

On day seven we landed in Pond Inlet, known by the Inuit as Mittimatalik. We were welcomed warmly with guides, a visit to their museum/visitor center, a cultural presentation in the community center and then a friendly soccer game between passengers and the locals, which, in a long-standing tradition, the Adventure Canada team lost.

I am just over halfway through this High Arctic Adventure. I will write a number of posts on the what, why, and how of expedition travel as well as on this trip specifically. Today is a sailing day as we cross Davis Strait to Greenland. I’m writing to share an introduction to my experience in the Canadian Arctic. 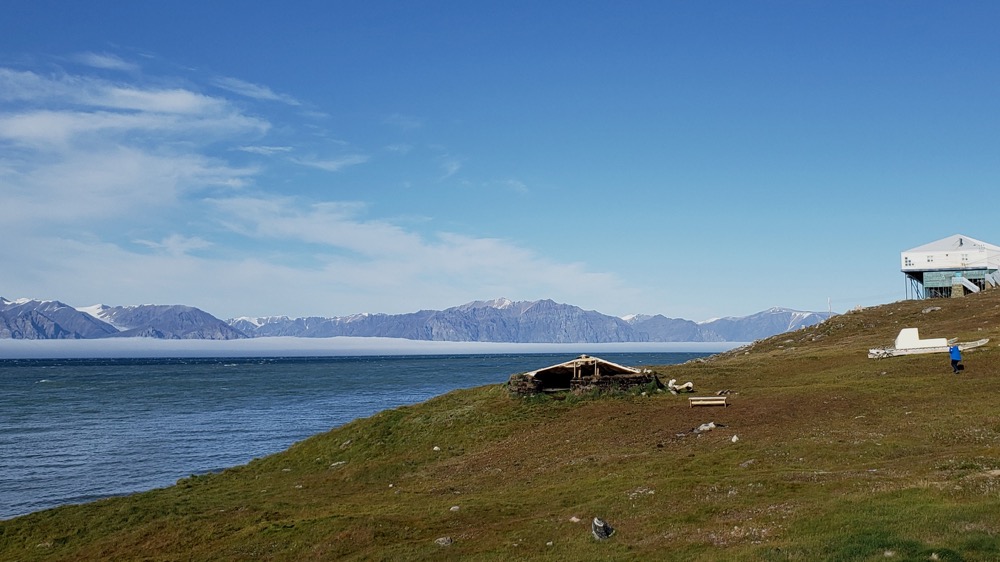 This is just one view of Pond Inlet. In the center is a turf house. In the upper right is the visitor center. In the background are stunning mountains that my camera cannot do justice. 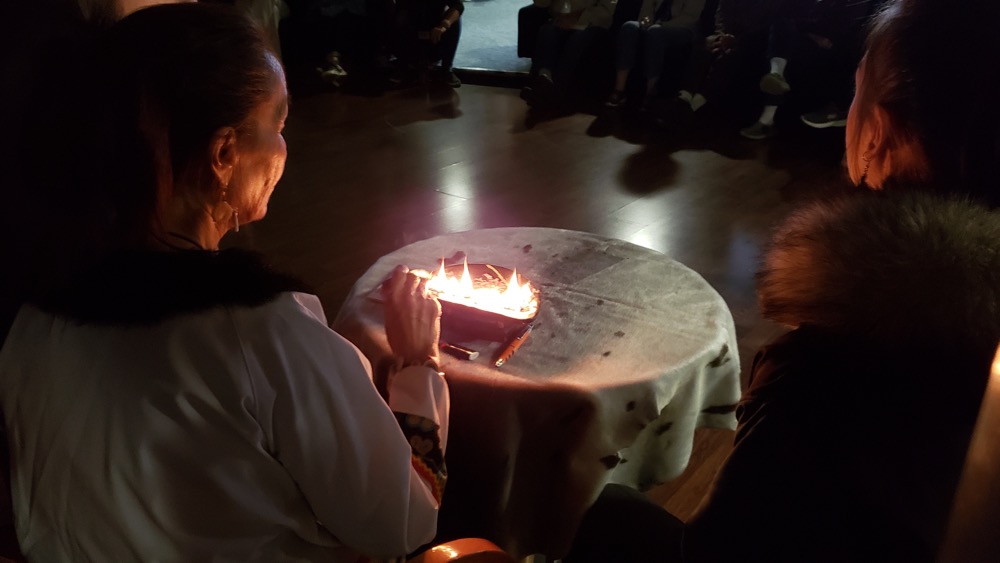 This is the lighting of the Kudlik by Martha, an Inuk who lives in Ottawa. She was one of our Inuit cultural specialists and has a long history working for Inuit rights and Inuit women's rights in particular. A film called Martha of the North shares her and her family's story about the impact of the Canadian government's policy of moving Inuit families away from their homes to the high north in an attempt to confirm Canadian sovereignty of this part of the Arctic. This film is available through the National Film Board of Canada and should be seen by all.

Solo Travel Above the Arctic Circle

Solo travel in Nunavut in the Canadian north is not an easy proposition. To go there independently takes a particularly intrepid traveler. There are a few places one can fly into such as Iqaluit, the territory’s capitol, Resolute Bay and Pond Inlet. It’s possible to hire guides and travel the north by snowmobile or dog sled. But that kind of adventure travel is not for everyone and certainly beyond me.

Fortunately, there are a small number of expedition companies that travel the Arctic. I was the guest of Adventure Canada. On this departure, there were solo passengers from Europe, the US, Australia, New Zealand, and Canada. Passengers ranged in age from teenagers to a few women in their upper 70s, with the eldest being 86.

Adventure Canada is a family run company which helps create a lighthearted atmosphere within the safety first, educational setting. With only 164 passengers, people get to know each other quite quickly. After physical and educational days, the evening entertainment involves sing-a-longs, dances, talent shows, and games. It all feels more like a large family reunion with the meeting of new cousins than a cruise with strangers. 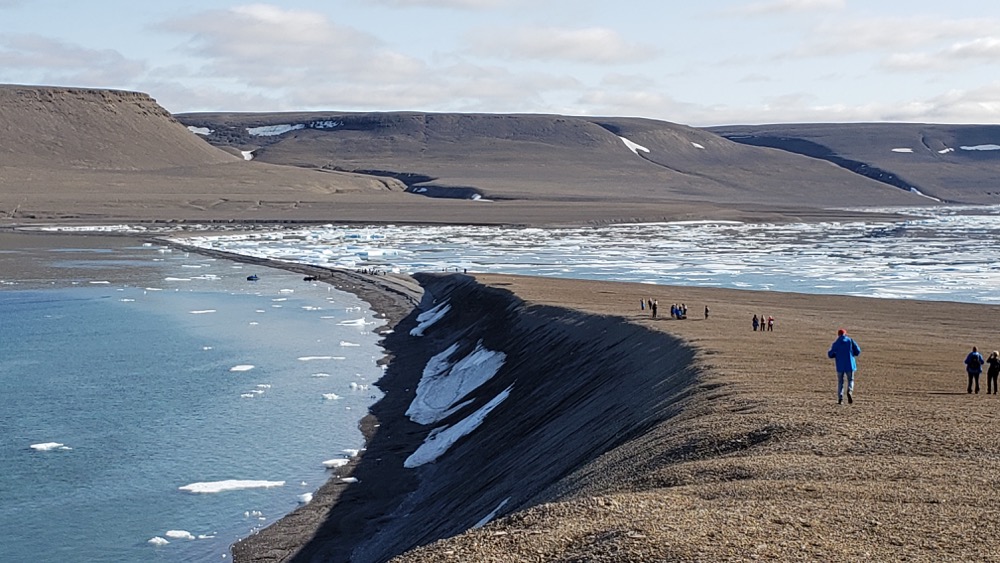 After going to Prince Leopold Island rather than Beechey, we sailed in the night to go back to Beechey, where graves of three members of the ill-fated Franklin expedition of 1845 are located. The expedition ships were found only recently: the Erebus was found in 2016 and its sister ship, the Terror, was discovered in 2018. This is a view of our landing point on Beechey Island.

The first day of any trip sets the tone, especially when there are so many logistical details involved. We flew out of Ottawa on a charter plane from Ottawa’s private airport on a 7-hour flight to Resolute Bay with one stop in Iqaluit for refueling. When we arrived in Resolute airport, we took a bus to the beach where we were fitted with life jackets for the zodiac ride to the Ocean Endeavour.

On board we checked in, received our keys, and were taken to our rooms where our luggage had already been delivered. Shortly after, there was a safety drill that included mustering in one of two locations, and then going to the lifeboats where we received and put on other life jackets. Following the drill, we went through the boot fitting and learned mud room and departure procedures which I’ll describe in a practical post on expedition travel soon. There was then a welcome in the Nautilus Lounge by people from Resolute Bay with local games, dinner, and then a fairly early night.

It was a very full day with many moving parts that ran smoothly, giving me confidence that they had everything well in hand and that I’d be able to handle every aspect of the trip. 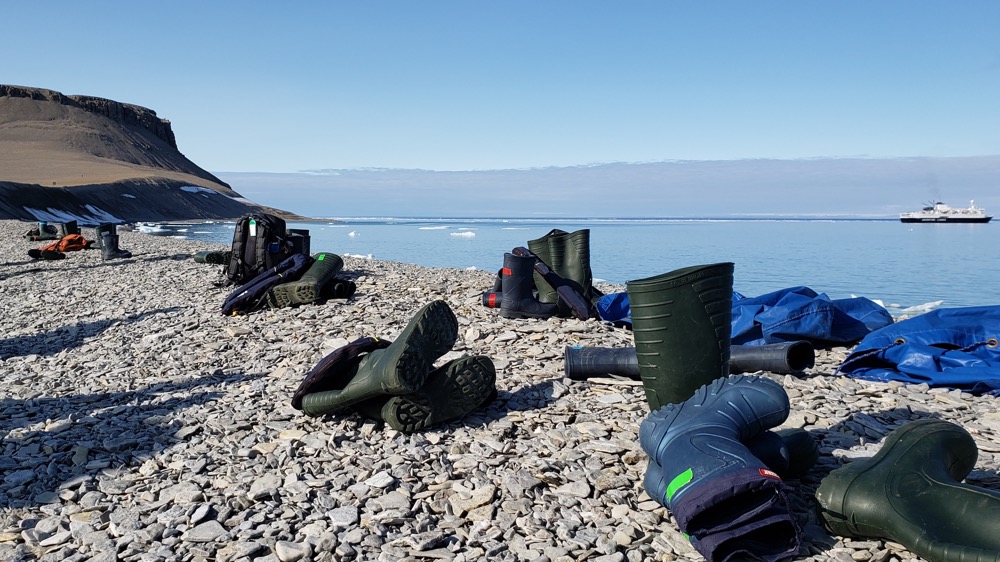 Typically we wore rubber boots for the zodiac ride and took them off on shore to wear our hiking shoes or boots. You can see the green tape of the boot at the front right. This indicates the green group and is how they manage the pace for people going to the zodiacs and make the landings efficient. 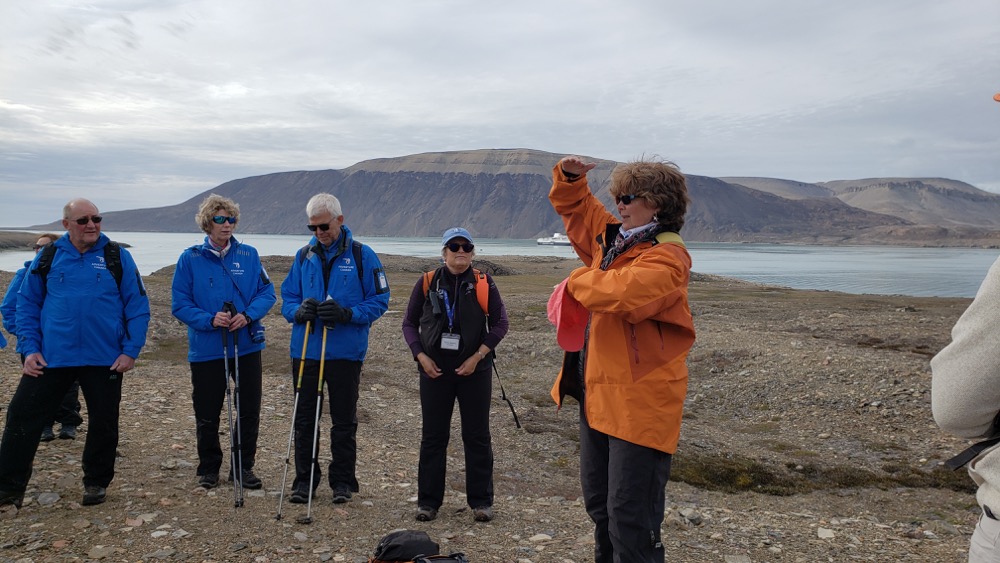 Charlotte is a glaciologist. Here she is onshore explaining the polar icecap and its impact on the soil, rocks, and geography of Devon Island.

The Nature of an Expedition Cruise

This fact was established from the start.

Before leaving Ottawa, we had an orientation and learned just how much nature was going to define our expedition rather than a predetermined itinerary. Our starting point was to be Resolute Bay in Nunavut but in the previous three days, ice conditions made it look like we were more likely to start in Greenland instead. This is why our expedition leader is referred to as “reactionary planner”.

To help us understand the nature of ice and its implications for the north (and set the tone for a trip that would involve many expert lectures and explanations over the 12 days) we heard from an ice expert with Environment Canada, the department that publishes ice maps of the Arctic daily.

Education is a priority onboard. By my count there were 13 academics and specialists in everything from Inuit culture to ornithology to biology, archeology, geology, glaciology, history, and more. On landings, these experts were positioned along hikes or scattered through our defined exploration area offering interpretation of the plants, rocks, dung, and anything else of interest. Where I saw rocks, plants, and sand these experts saw thousands of years of history, both natural and human.

There are recaps at the end of the day to review what we learned/enjoyed and briefings after the recap to give us the next day's plans. The schedule for the next day is published on the monitors throughout the ship and in your cabin from after dinner one day to dinner time the next. It's almost impossible to miss an activity you'd like to attend. The activities go beyond the educational sessions. There has also been painting, an introduction to Inuit art, and a polar bear dip.

And, of course, there's food. Three meals a day; tea, coffee, and snacks at any time; and appetizers before dinner are the daily routine. But we also had an ice cream social one afternoon, a coffee tasting another afternoon because the Inuit have partnered with indigenous farmers in Peru to produce and sell Inukhuk Kaapia, and a country food tasting. Country food is typical Inuit food, fish and game, from the land. 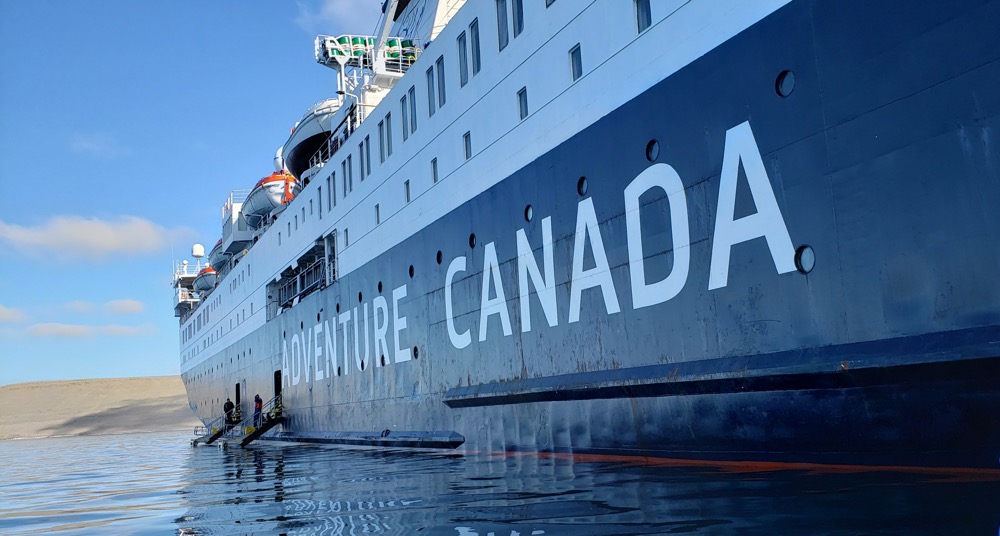 Our ship was called the Ocean Endeavour.

Stay tuned for future posts on highlights of our landings, practical tips for expedition travel, solo travel in Nunavut,  and what I’ve learned about sustainable and respectful travel on this trip.

This trip was sponsored by Adventure Canada but, as always, the views and opinions are my own.

All photos were taken on my Samsung Galaxy S9 which has a high res camera. I have not been sponsored by them. Adventure Canada has a camera lending program that is sponsored by Nikon. You can borrow some amazing equipment and get advice from professional photographers onboard.