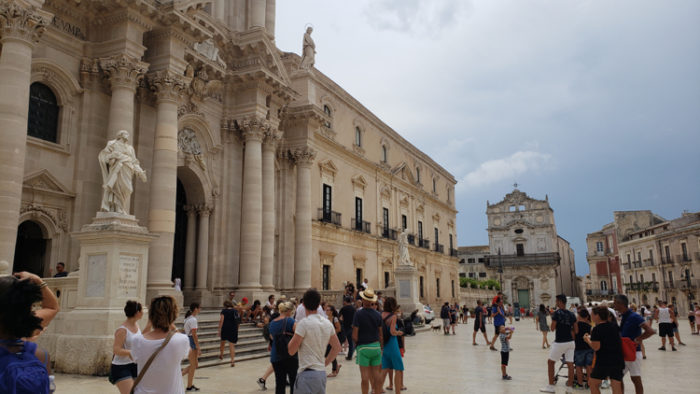 The Cathedral of Syracuse is on the left.

The Cathedral of Syracuse, or Duomo di Siracusa, was a fascinating surprise.

Like many of you, I have seen many of the churches of Europe.

There's actually a code in the tour industry for the fact that so many churches are on itineraries. ABC stands for “another bloody church”. I don't think it's an act of disrespect. It's just that if you are a tour guide you may take groups through hundreds of churches in a season. It could be difficult to maintain the appropriate enthusiasm.

I've visited the occasional synagogue and mosque, but it is Christian churches that dominate Europe. Romanesque, Gothic, Renaissance, Byzantine, Baroque: there are many different styles. I've seen sweet, simple churches, which I tend to like a lot, and elaborate cathedrals with enormous paintings, statues, and gold leaf everywhere.

I've likely visited more than a hundred churches in Europe.

However, on my trip to Sicily with Just You, I discovered that I have a favorite.

Just You sponsored this trip. They are a tour company that works exclusively with solo travelers. You can read what the experience is like here: Solo Traveler on a Solos-Only Tour. 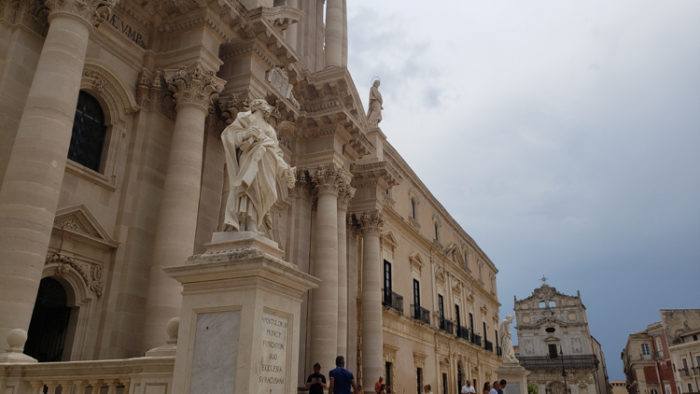 Another view of the baroque facade of the Duomo di Siracusa.

My Favorite Church in Europe

My favorite church is in Syracuse, Sicily. It's actually the Duomo di Siracusa, located on the island of Ortygia in old Syracuse. The building itself dates back to the 5th century BCE. It was first built as the Temple of Athena, the Greek Goddess of Wisdom and War. Like many Greek and Roman temples, it was transformed to be a church in the early Christian era.

The cathedral has seen 2,500 years of change. Excavations show that the site was a place of worship centuries earlier. What makes this cathedral so fascinating to me is that it was actually built on and around the original Doric temple. As a visitor, you can see the layers of architectural change.

Below you can see the Doric columns from the 5th century BCE on the outside of the cathedral. Building the walls between the columns, an orthodox, Byzantine church was created in the 6th century. The columns are visible on the inside of the church as well. In the 9th century, Arabs took Syracuse and converted the church to a mosque. Then, in the 12th century the Normans invaded, making the building, once again, Christian, but this time under the jurisdiction of Rome. After an earthquake in 1693, the façade was rebuilt in the Baroque style, with Corinthian columns.

I love this church because its long history is so evident. You can get a feel for this in the images below.

Here you can see the Norman roof on top of the enclosed Doric columns. The columns are from the Greek Temple of Athena, the walls are from the Byzantine period, and the roof was made by the Normans. 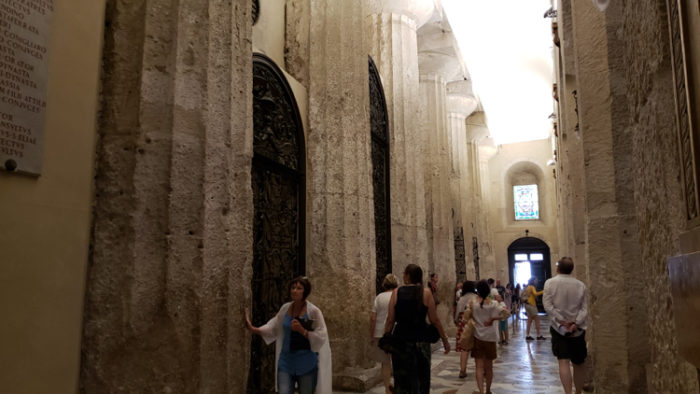 The columns can be seen even more clearly on the inside. 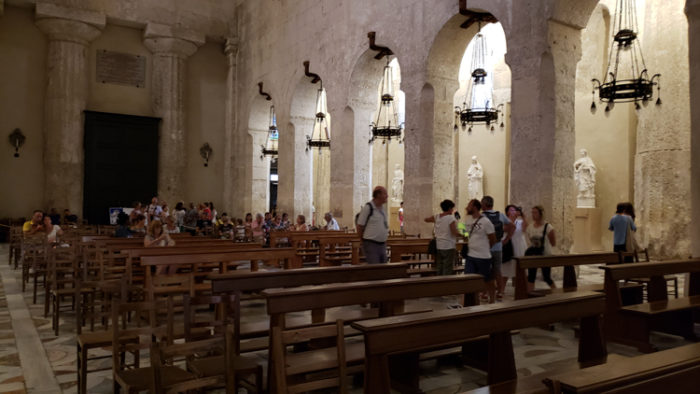 In the nave you can see all periods of the cathedral's history. 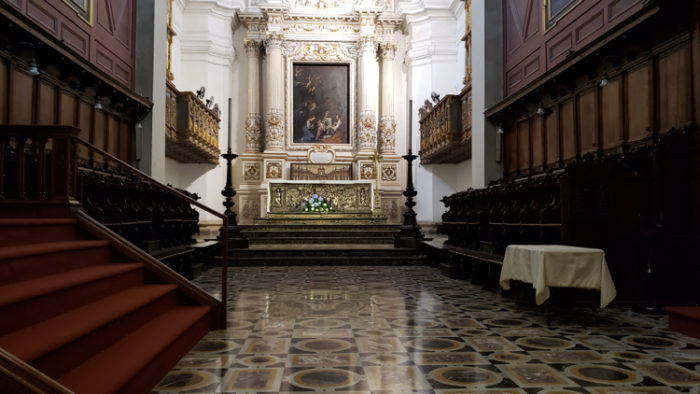 A Baroque altar. There are additional chapels along the side from more recent centuries.

Not more than a few blocks away from the cathedral is the waterfront where we had lunch.

A few days later we saw two more churches when we visited Monreale and Palermo on the hill above Palermo. 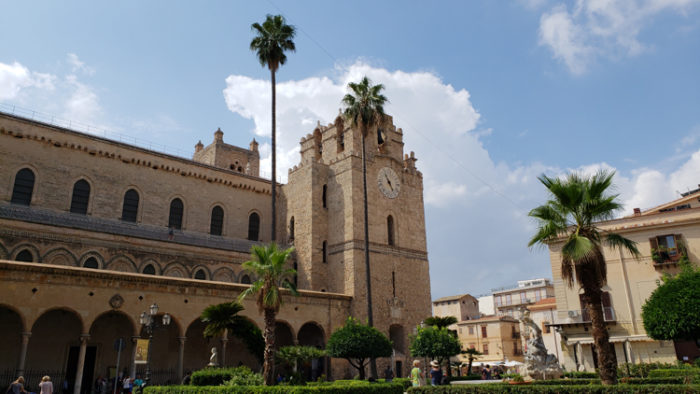 The Duomo di Monreale is a wonderful example of Norman architecture. It was begun in 1174. 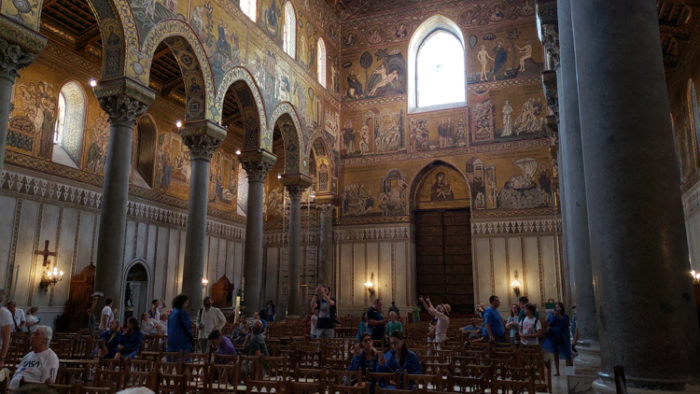 While the cathedral's structure was built in a Norman fashion, the interior held true to the Byzantine artistry with stunning mosaics everywhere. 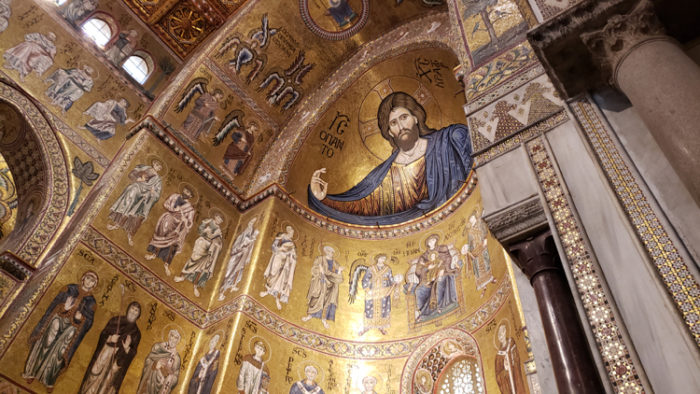 The mosaic artists were local and from Constantinople. They covered 6,000 square meters in mosaics in just three years.

The Cattedrale di Palermo is dedicated to the assumption of the Virgin Mary. 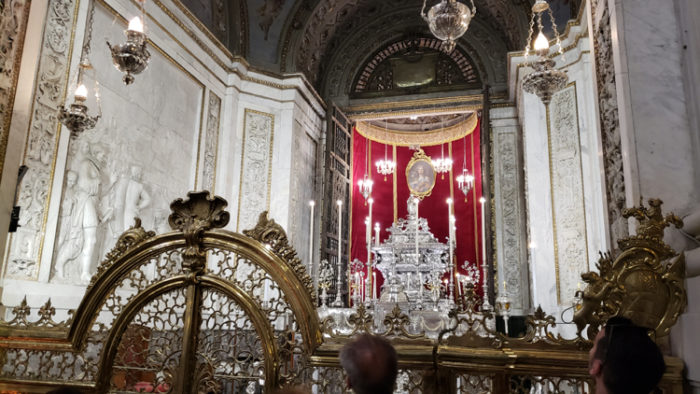 This is the silver altar of Santa Rosalia Chapel in Palermo's Cathedral of the Assumption of Virgin Mary.

You can read more about this trip here: