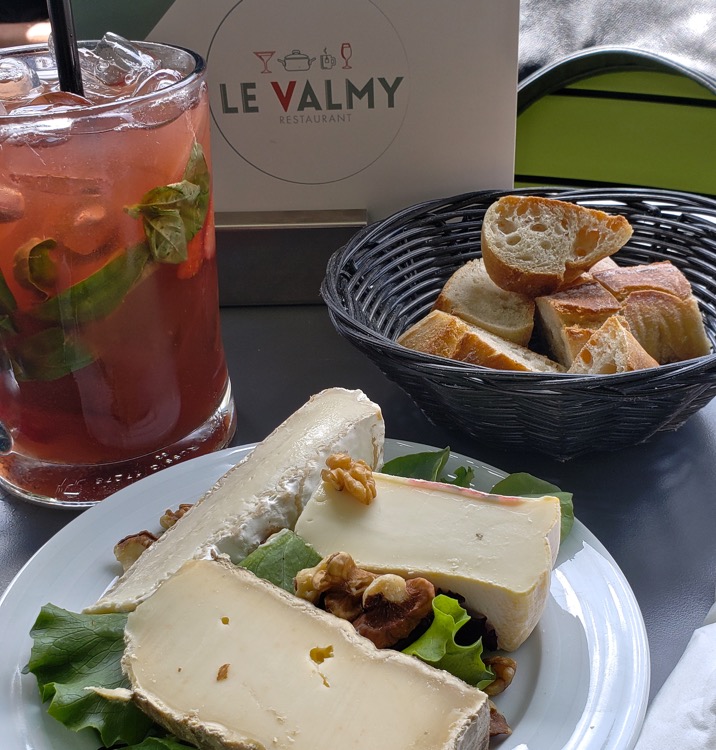 Valmy restaurant in Tours, France where I began my walking tour.

The Loire Valley was the center of the French Renaissance. It's also a 2019 highlight of any travel to France as the country celebrates the 500th anniversary of its Renaissance.

I traveled the Loire Valley, going from chateau to chateau last year on a self-guided walking tour, which you can read about below. While I will miss this year's celebrations, I have some information to help you take them in on your travels.

Picking a date for such an anniversary could not have been easy. When does a historical period begin and end? It's arbitrary. But for the French, a few things lined up. This year marks the 500th anniversary of the death of Leonardo da Vinci, the birth of Catherine de Medici, and the moment the first stone of the Château de Chambord was laid.

Here's a bit of background on the French Renaissance: 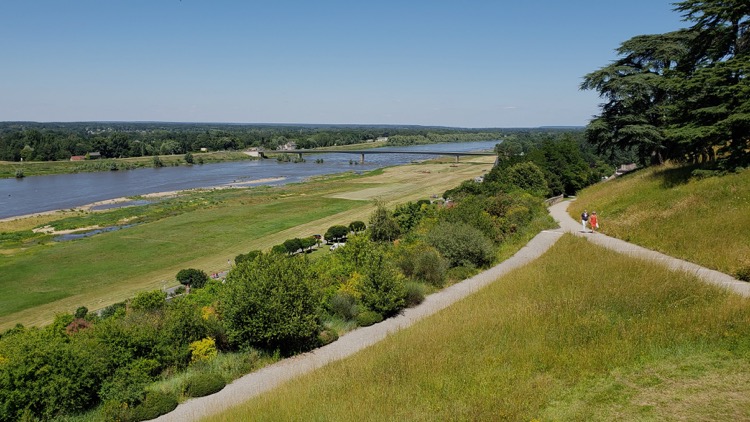 Chateau to Chateau Walking Tour in the Loire Valley

My château to château walking tour in the Loire Valley revealed some of the drama, and sometimes melodrama, that took place in the French Valley of the Kings.

In the past, I have visited castles, seen ornate rooms and marveled at massive tapestries. But they never came to life like the chateaux of the Loire Valley did for me on this trip.

The French Kings moved to the Loire in the 16th century coincidental with the rise of the renaissance which had a glorious impact on the design of the castles and gardens. Some chateaux are grander and more famous than others, but all have dramatic history behind them. History full of seductions, trysts, and illicit rendezvous.

The walking tour with Exodus Travels took me to three châteaux towns. I walked every other day and the days in between were available for me to explore the castles. You can read how relaxing I found the trip here: True Relaxation Found Walking Through Vineyards.

My first château was in Chaumont. 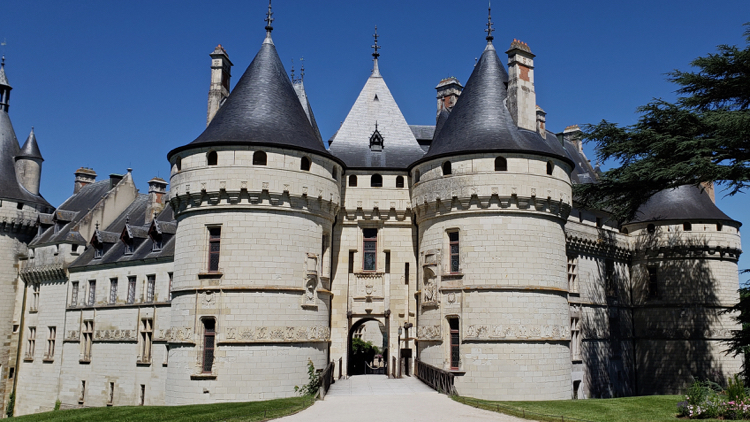 After being picked up at the train station in Tours, I was taken by the Exodus team to Chaumont sur Loire, checked into my hotel, and given an orientation session. I was then pointed to my first chateau. The entrance was directly across the street from my hotel. Following the path uphill to the château and its gardens (Chaumont is famous for its annual Festival International des Jardins), I spent many hours exploring.

Some of the drama. Like many castles in the Loire Valley, Chaumont was first built as a medieval fortress. The château was acquired by Catherine de' Medici, wife of Henry II of France, in 1560. Catherine figures large in the history of the Loire's chateaux. Upon the death of Henry, Catherine forced Diane de Poitiers, Henry's favorite mistress, to whom he had given the more spectacular Château de Chenonceau, to trade castles with her. As you will see in the next section, the fabulous Chaumont was a step down for Diane.

Here are the photos of Chaumont. Read on for more about Chenonceau. 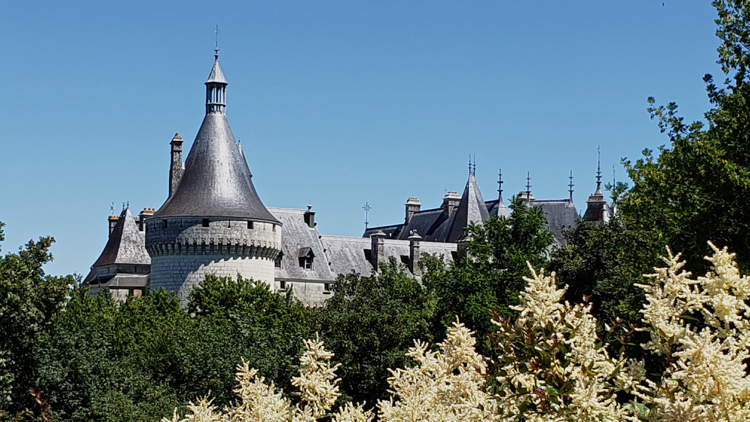 View of the château from the gardens 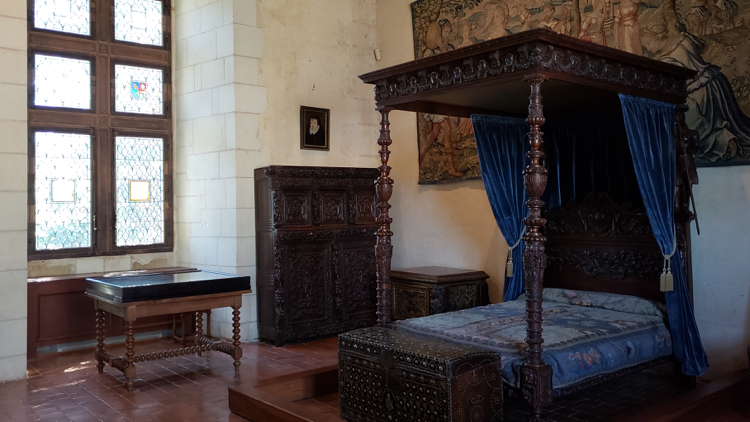 The Catherine de Medici room. From her bedroom, she could go through a door and be on a balcony overlooking the castle chapel from which she could attend service without being seen. 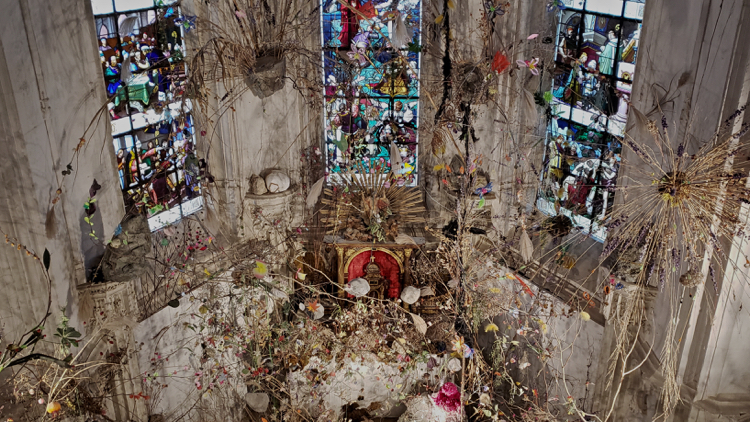 A view of the chapel from the balcony that Catherine de Medici used. It was decorated with dried plants and flowers as part of the garden festival at the time I was there. 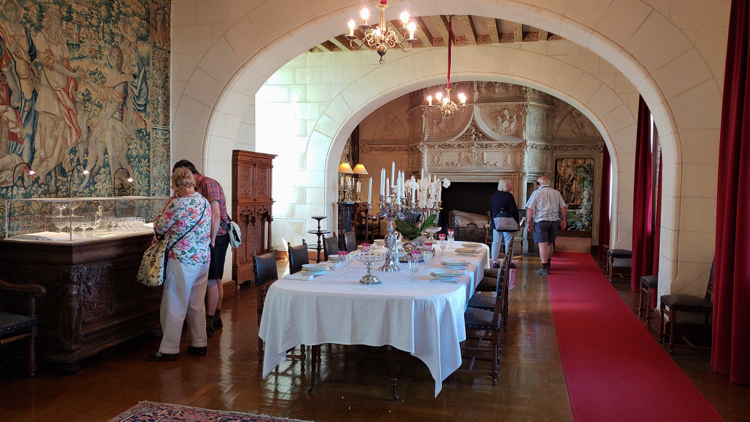 The dining room at Chaumont – not particularly large by Château standards.

This is one of dozens of garden installations on the grounds of Château Chaumont as part of the Festival International des Jardins.

I arrived in Chenonceaux at the end of my first day of walking. I was a tad tired. I had a lovely meal at the inn where I was staying, stretched, and went to bed. The pool was tempting but not for me that night. The next day, I spent the day at Château de Chenonceau, one of the most spectacular Châteaux of the Loire Valley. It's not only magnificent for its richly decorated rooms, turrets, and gardens, but also for the Grand Gallery that stretches across the width of the Cher River.

Some of the drama. Henry II was married to Catherine de' Medici, but it was a practical relationship. His real love was his favorite mistress, Diane de Poitiers, who was 16 years older than him. They had a remarkable 25-year love affair. Henry gave Diane the Chenonceau and she made significant improvements to the castle and gardens. Francis II was only 15 years old when his father, Henry II died and he became king. Given his son's youth, Catherine's power rose and she kicked Diane out of Chenonceau and down the road to Chateau Chaumont.

One other fascinating bit of history regarding Chenonceau took place during World War II. The Cher River, across which the Grand Gallery spans, was the border between occupied and free France. Many people escaped the occupied zone by entering the castle on the bridge side of the Château and exiting into freedom on the turret side. 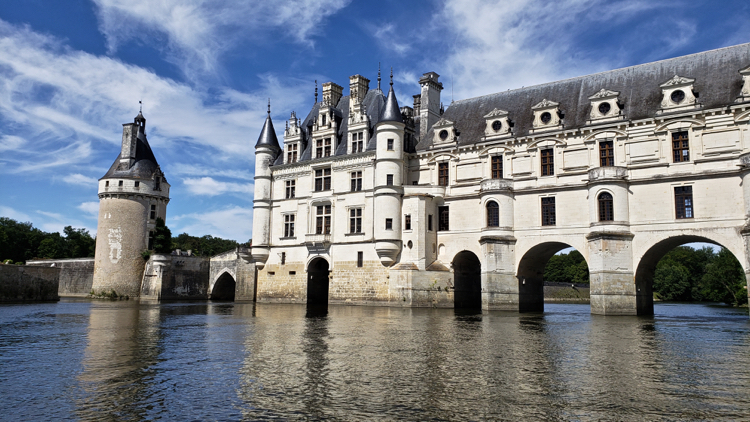 A highlight of the Loire Valley is the Château de Chenonceau with the castle spanning across the Cher River. I took this photo while on a boat excursion with Chenonceaux en Bateaux. 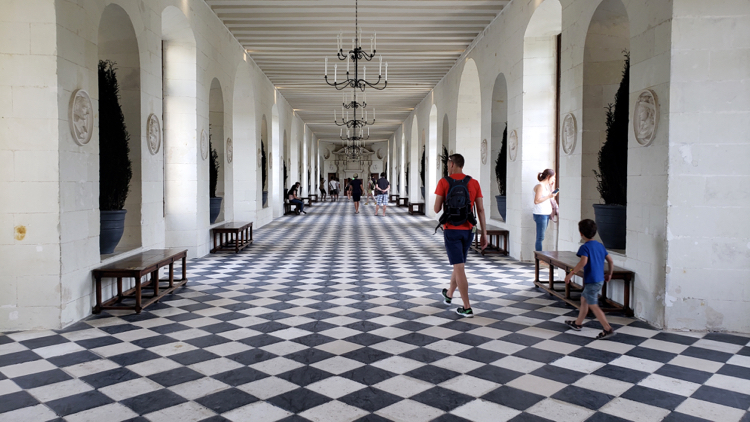 The grand gallery stretches across the Cher River. It was dedicated in 1577. 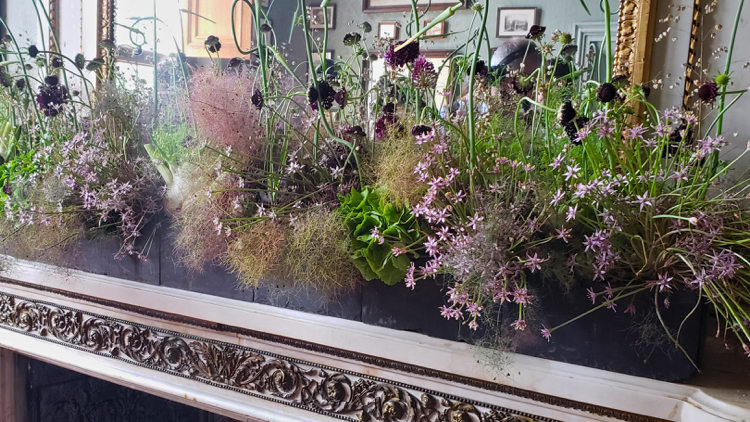 The floral arrangements inside the château are all made from flowers of the château's gardens and changed every week. 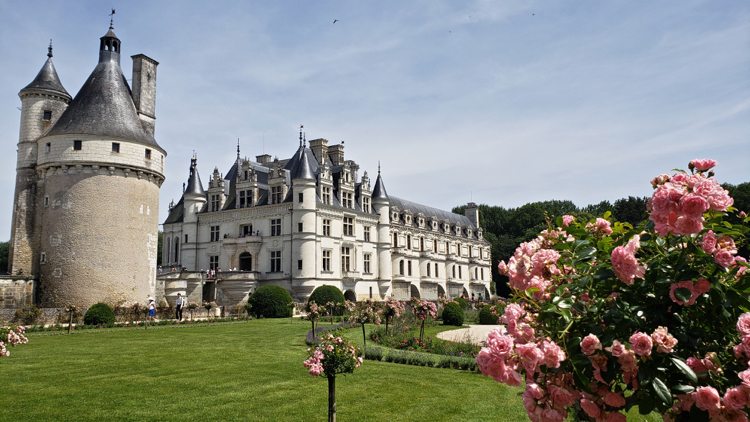 View of Château de Chenonceau from the garden.

The Château d'Amboise has been extensively rebuilt over the centuries. It became a favorite residence of French royalty in the 15th century and this continued into the 16th. It is where Henry II and Catherine de' Medici raised their children along with Mary Stuart, the child Queen of Scotland, who had been promised in marriage to the future French king, Francis II. Its history as a fortress is clear given its excellent defensive position on the cliffs of Amboise overlooking the Loire Valley. Its role in the French renaissance is also important as it was to Amboise that Francis I, Henry's father, enticed Leonardo da Vinci to come and spend his final days.

Some of the drama. After Henry II's death, Francis II rose to the throne at the age of 15 but had a very short reign of 17 months. Unfortunately, it was long enough for him to be abducted as part of the Amboise Conspiracy, part of the French Wars of Religion that saw 1,200 Protestants gibbeted and strung from the Amboise town walls. Francis was returned to the country but died soon after. The cause of Francis' death is unclear though some believe that it was a protestant conspiracy. 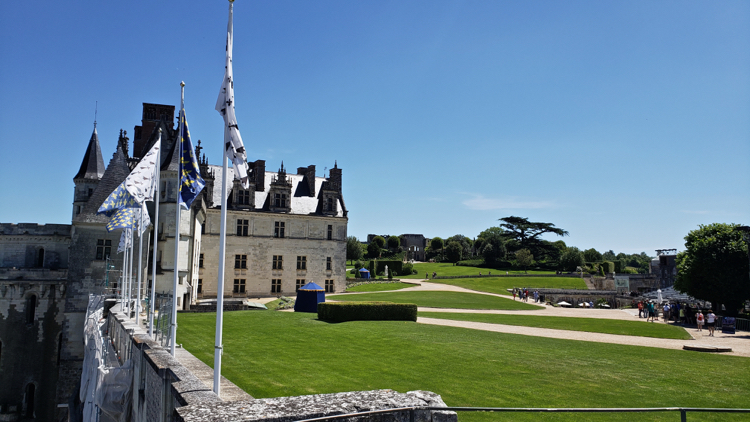 At the Château d'Amboise, the third château I visited, I found the building itself and its location to be more interesting  than the rooms inside. 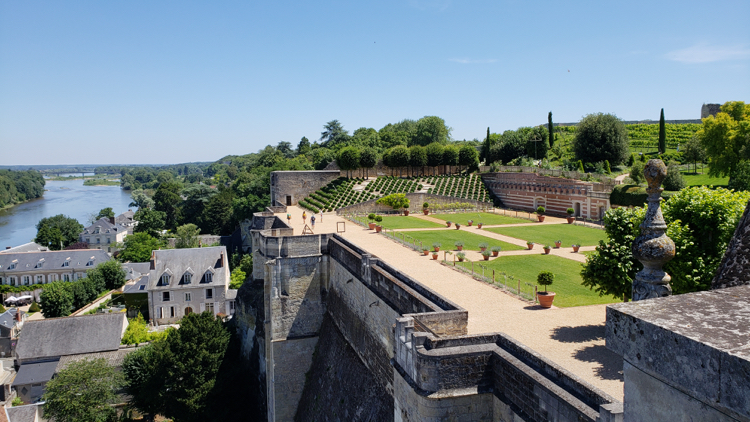 A short walk up the road from the Château d'Amboise is the Château Clos Lucé, the last home of Leonardo da Vinci. While the châteaux of the Loire are all furnished and decorated to reveal their pasts, Clos Lucé has much more to offer. The first rooms inside the château do represent the lifestyle of da Vinci but the rest of the castle is dedicated to his art and inventions, which are remarkable. Inside, there are scale models of some of his inventions, and on the extensive grounds around the château there are full size models of his works.

Some of the drama. DaVinci arrived at Clos Lucé in 1516 with three paintings, including his famous Mona Lisa. He spent the last three years of his life there working on various projects for the king with his friend and apprentice, Count Francesco Melzi, among others. Given da Vinci's status in Italy, the chateau received many distinguished guests over the years of his residency. Clos Lucé was connected to the Château d'Amboise by a 500 meter underground passageway allowing Francis I and da Vinci to meet easily. Legend has it that he died with Francis I holding his head. This is depicted in many paintings but is not necessarily fact. 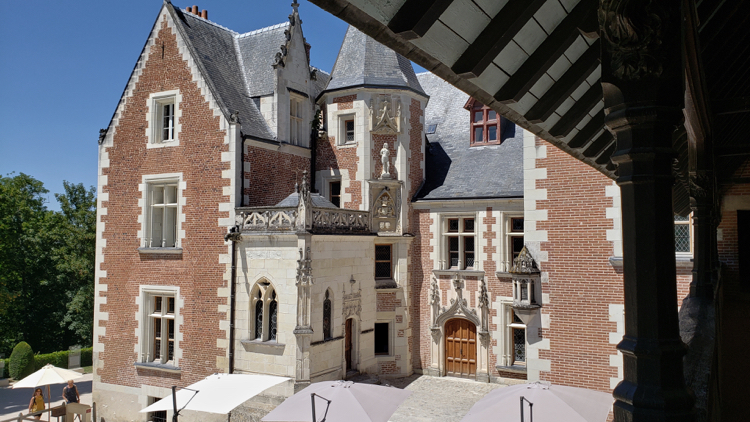 Château Clos Lucé is where Leonardo da Vinci spent the last year of his life. 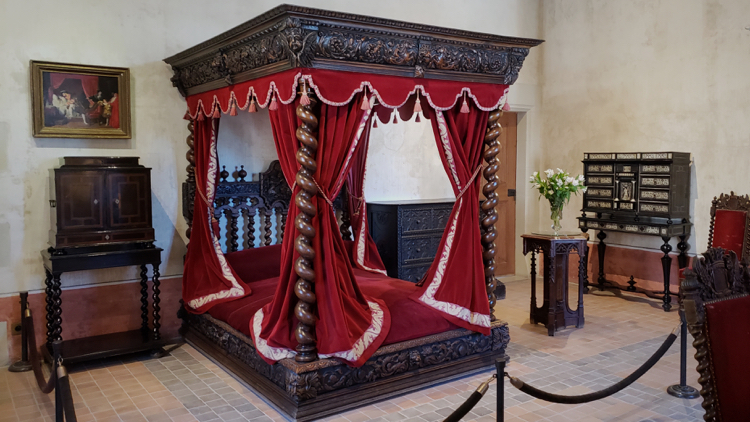 The bed in which Leonardo da Vinci died. 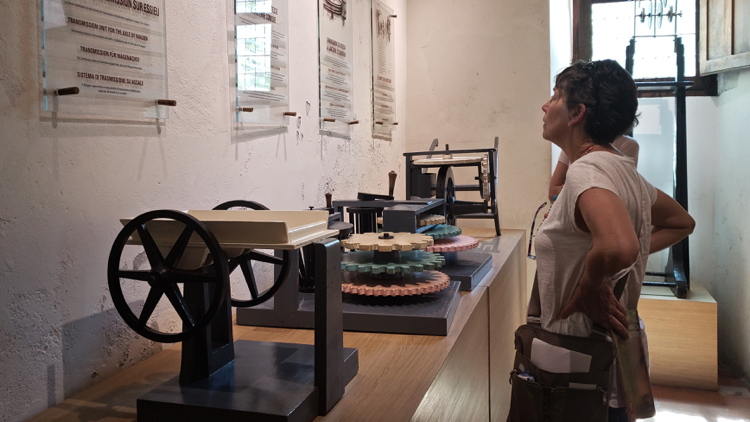 Scale models of his inventions inside the chateau. 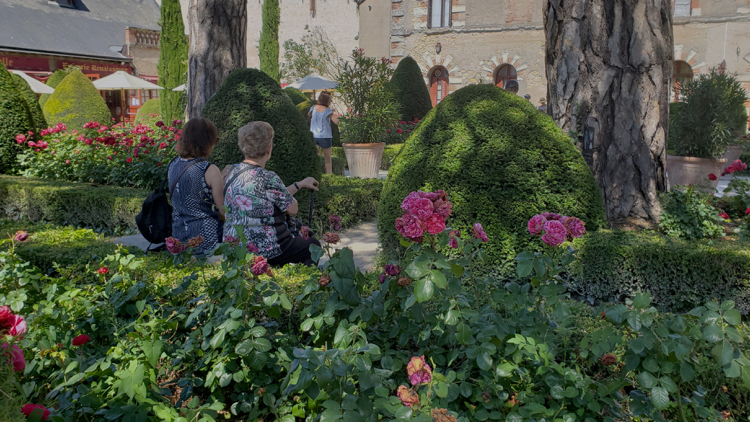 There's a garden and cafe for lunch. 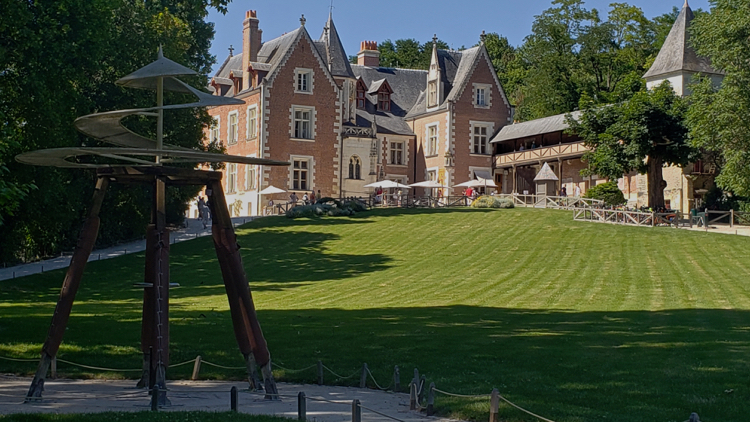 Just one of this inventions outside. 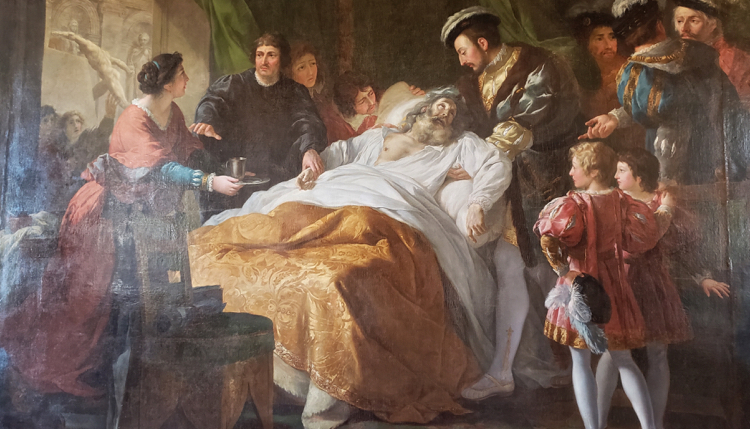 Painting showing the death of da Vinci with Francis I holding his head.

This trip was sponsored by Exodus Travels. Of course, Solo Traveler maintains full editorial control of the content published on this site.