You are here: Home / How to Travel Alone / Solo Travel Planning / Travel Money / Countries with the Best Deals on Flights: Knowledge to Help You Save 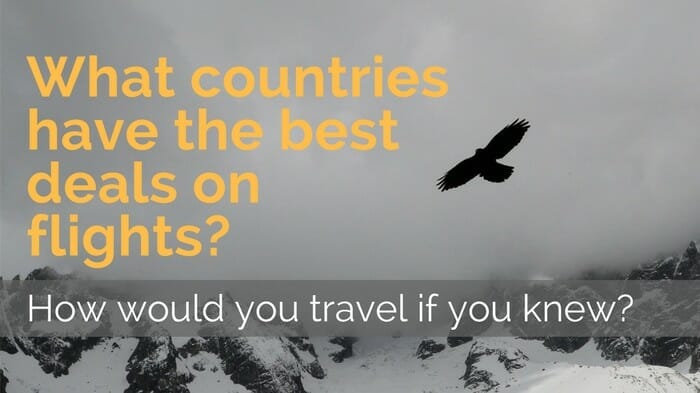 What countries have the best deals on flights?

Can this knowledge help you stretch your travel dollar?

That depends on where your home is and where you want to go. Do you live near the border with another country? If yes, you may benefit from better fares in that country. If you're planning a trip that will involve flights within a country or region you may save by choosing your destination based on those costs.

Two weeks ago I wrote a post called Extreme Saving on Flights. Our expert indicated that if you find a flight “that amounts to about 6 cents a mile you’ve found a good deal. It’s a good rule of thumb and it means it's time to buy.” But that's an American perspective. If you're Canadian a good deal might be significantly higher than that.

The Most and Least Expensive Countries for Flying

Kiwi.com’s 2016 Aviation Price Index reveals the average cost per 100 kilometers for flights overall and also breaks the data down for domestic and international flights using low-cost and full-service airlines.

The information is great news for those traveling to India as the country ranks #1 in terms of the average price of a flight per 100km which is US$3.25 or 3 cents below the 6 cents per mile target mentioned above. It’s terrible news for Canada which ranks 70th (of 75) with the average price of a fight per 100km being $38.71 or almost 23 cents per mile, almost four times the American standard of 6 cents.

So how can this information be applied? Generalizations such as I related above are never accurate in every circumstance. However they can be a guide, Here are a few things for your to consider when planning your travels.

I hope that by sharing the Aviation Price Index with you you'll have information that will help you save on flights so that you can travel longer, farther and more often.