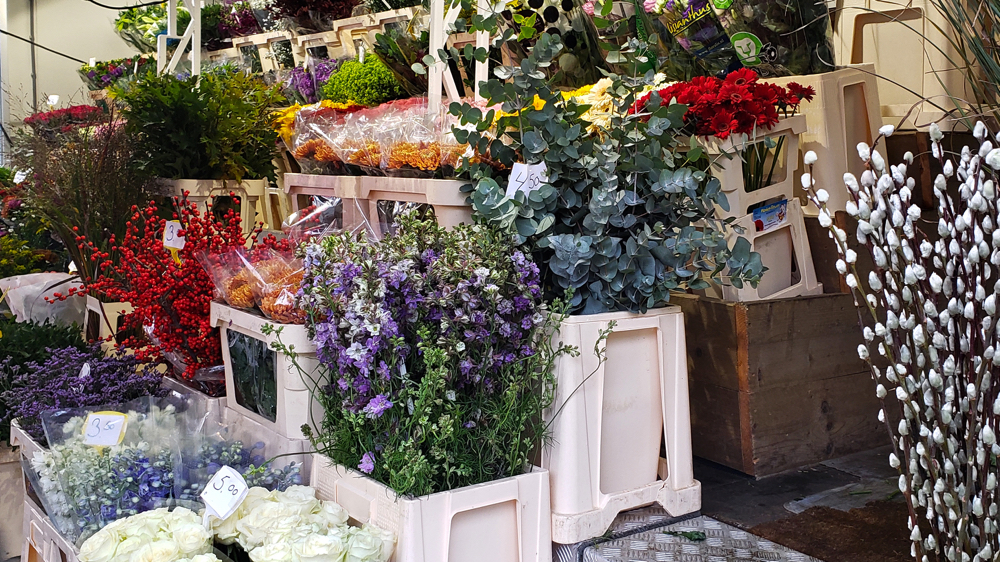 Den Bosch (pronounced Den Boss) is for the solo traveler who has already been to Amsterdam and wants to experience a part of the Netherlands that is truly Dutch.

While there, I once heard German spoken but otherwise, it seemed that all the tourists were Dutch.

Amsterdam is a fabulous city, but it's busy! Overtourism is part of the experience. English is everywhere.

Formally known as ‘s-Hertogenbosch, Den Bosch is the provincial capital of North Brabant with a population of just over 150,000. It bustles during the day, is quiet most weeknights, and comes more alive on weekend evenings. It is a city with a strong sense of community.

This trip was not solo. I was there with my husband for the 75th anniversary celebrations of the city's liberation in 1944. His mother was born there. His father was one of the Canadian troops involved in the liberation. They met and married and Anna Rosa moved to Canada as one of many Dutch war brides. Her father owned a music store and was a composer. We came especially for an event honoring him at a ceremony and concert on the Thursday evening.

But, back to that sense of community. We arrived in the city by train and, en route to our Airbnb, we went along Kerkstraat where his grandfather's store was located. It closed in the early 1980s. We went into a bookshop to ask whether they knew where exactly it was located and there they had postcards promoting a book coming out about his grandfather. The image on the card shows him in front of his store. One of the clerks lit up to tell us that she had bought sheet music there. Two doors down was the actual building that housed the store. It is now a hosiery shop but the owner remembered the music store as well.

The next day I was staring up at the tourist directional signs when a woman came up to ask if she could help me. We were looking for the river tour that actually goes under the city. She not only answered my question but walked us to the ticket shop. On the way, she told us how much she loved Den Bosch. “I kiss the ground of Den Bosch,” she said. We spoke about why we were in town. She asked for the family name and, wouldn't you know it, my husband's uncle had been her dentist. The family has not lived there for 35 years.

We had dinner that night with a travel blogger friend who lives nearby. He explained that, in the south of the Netherlands, life revolves around the family. In Den Bosch, family extends to a strong sense of community as well. We could certainly feel it. This sense of community also helped explain to me why, in the early 1920s, Simon's Jewish mother sang with two of her siblings in the city's Saint John (Sint-Janskathedraal) Catholic Cathedral, the largest in the Netherlands.

Ah, these are the riches that travel offers when they include understanding personal roots. 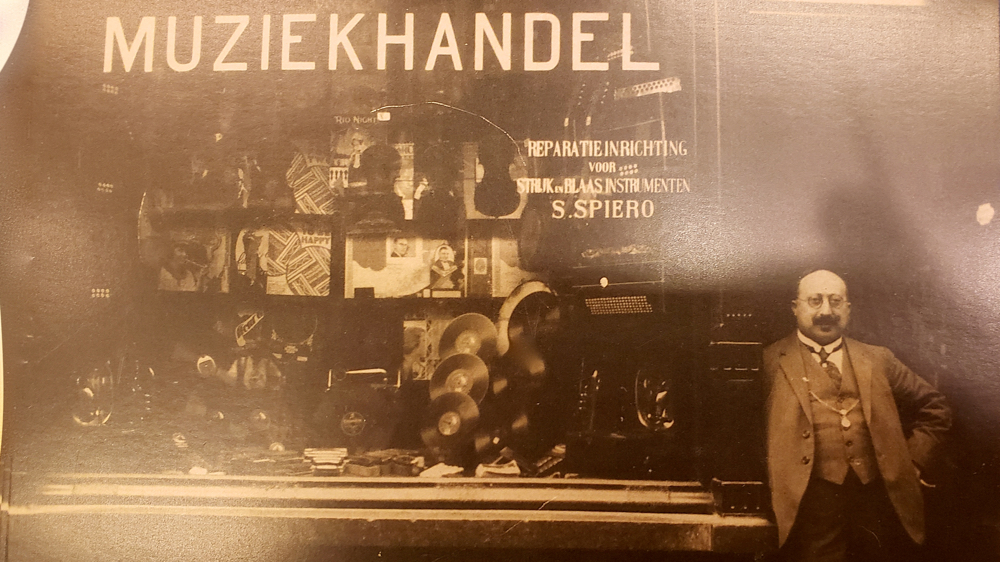 The postcard promoting the book about Simon Spiero, my Simon's grandfather.

I sent the story above in an email last month and received a number of replies asking about how Simon's mother's family managed during the occupation.

Simon's mother and her twin sister were the eldest of nine children. As we understand it, Simon's grandfather, for whom Simon was named, was a leader in the Den Bosch Jewish community. Deciding what to do was a challenge for all Jews as the occupation of the Netherlands took place very early in the war – May, 1940. Understanding the meaning of the occupation would have taken time. However, fortunately, Simon's grandfather decided that they had to go into hiding.

Simon's mother was in hiding in several different places in the countryside and was responsible for her youngest sister there. Her twin sister hid elsewhere with her parents. All the other siblings were separated and stayed with families who were part of the resistance. One of Simon's cousins, with whom we had a special visit, was hidden separately from his parents with a Catholic family. He was only three. They dyed his hair blond and he didn't know his parents when they came to get him after the war. One uncle and wife went through the underground in hopes of reaching the United States but they were turned into the Nazis at the Belgium border. They died at Auschwitz. One aunt and husband were also caught, though we don't know how. The family were informed by a survivor of Bergen Belson that she and her husband died there.

In the Netherlands, 75% of the Jewish population died in the Holocaust. The fact that two of a family of eleven perished is both remarkable and a tragedy. 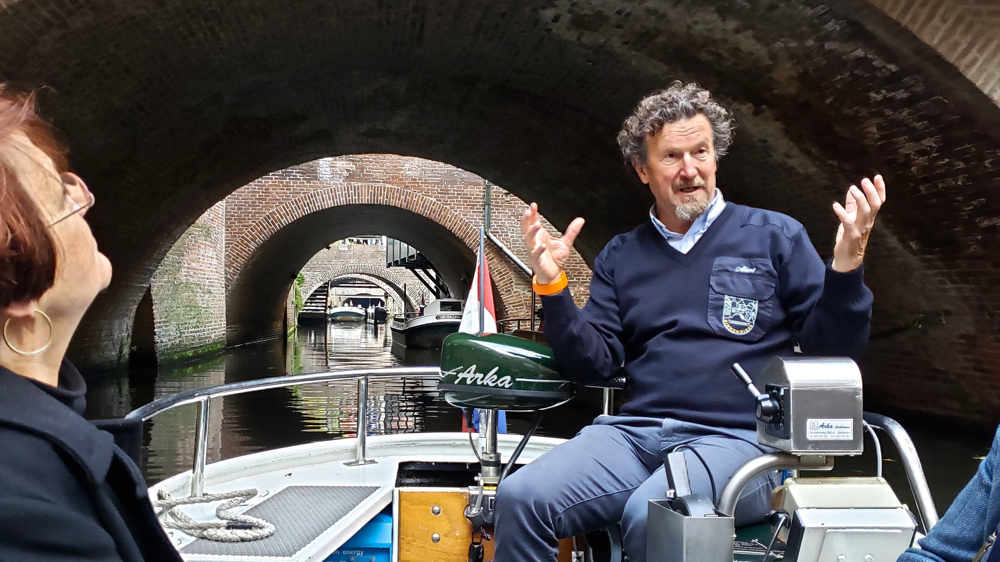 On the Binnendieze Boat Tour. 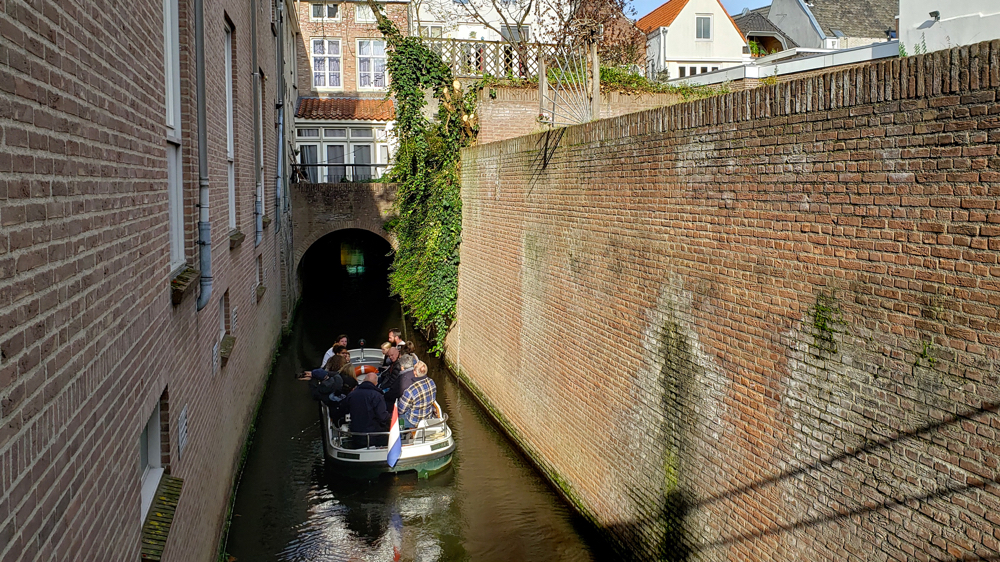 I had not noticed these small canals before. Sites like this had much more meaning after we took the tour. 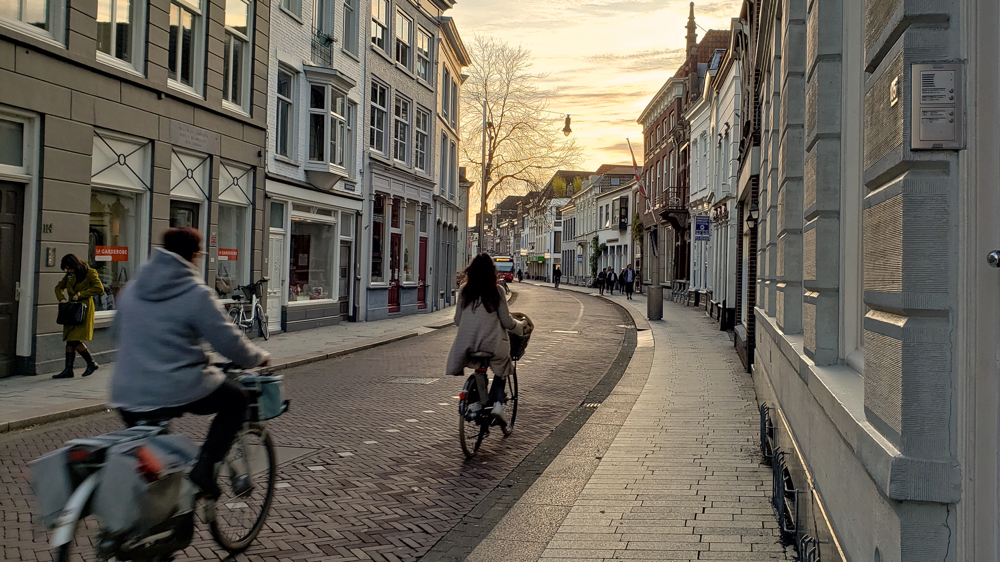 Bicycles are everywhere in Den Bosch. This was taken at dusk. During the day, this road was very busy with bikes.

While the events in Simon's family took us to Den Bosch, when there, we only saw family on one day. The rest of the time we were typical tourists. Yes, we were tourists. My apologies that this is not a solo trip but it would be remiss of me not to share with you the wonderful travel experiences waiting for you in Den Bosch.

We were absolutely thrilled with the location of our Airbnb, likely the smallest house in town. It was great for us but would not be recommended for anyone with mobility issues.

Here's what we did. 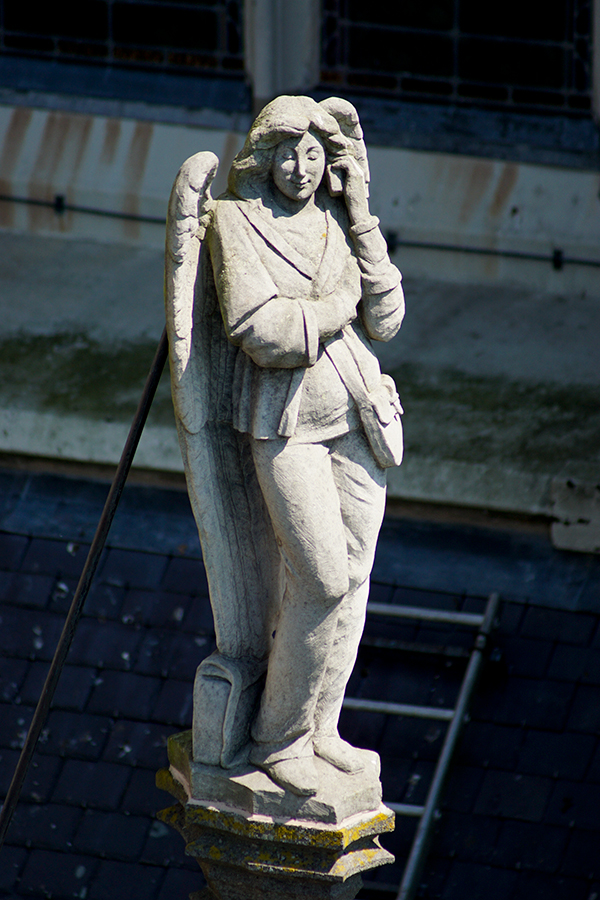 Look closely at the angel. She's holding a cell phone to her ear and wearing a Gucci bag. This was a nod to modernity made during the recent restoration of the Sint-Janskathedraal Catholic Cathedral, the largest in the Netherlands. 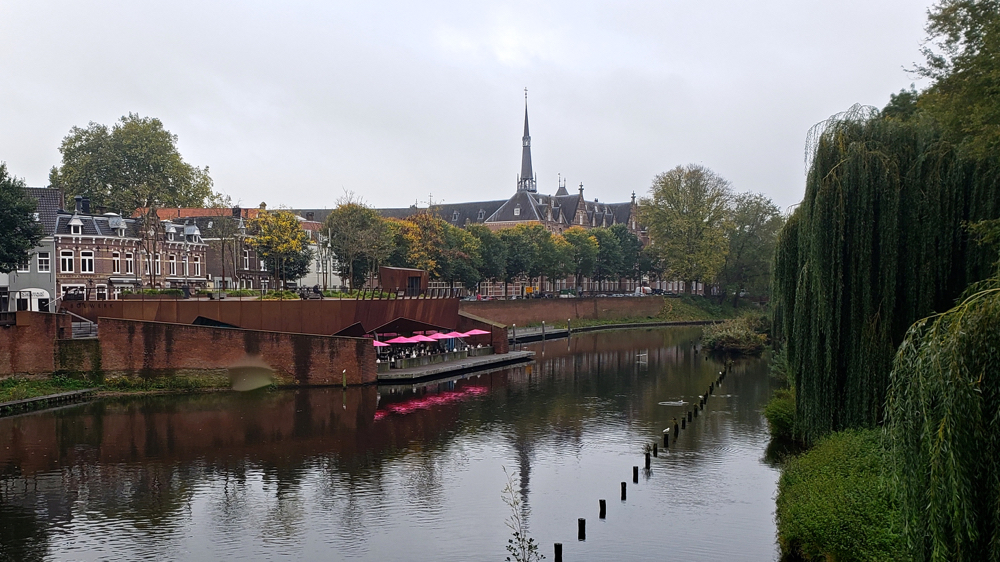 There are boat tours along the river to take. 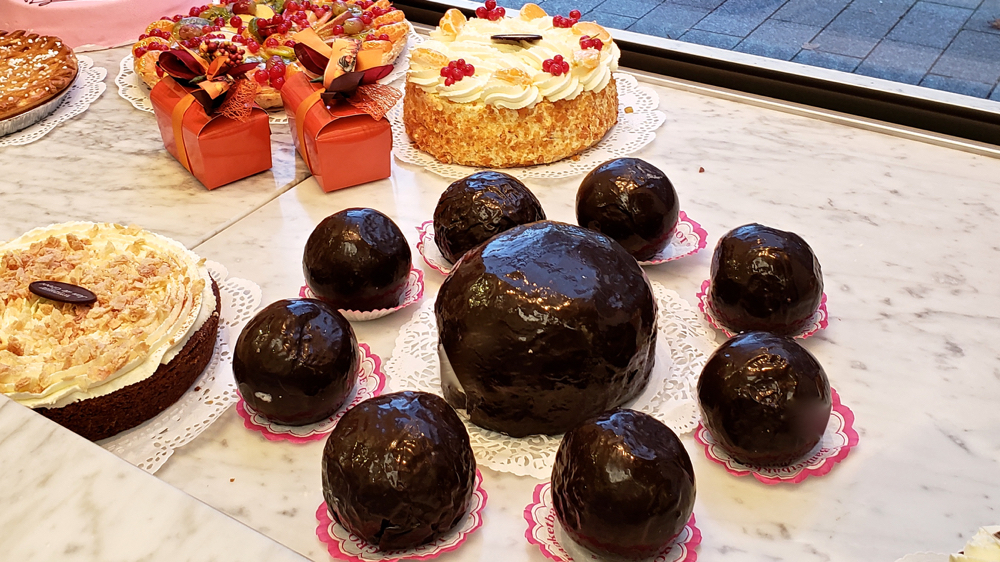 The city is known primarily for its Bossche Bollen. It's a chocolate ball injected with cream. So you're mostly eating cream, which would not be something I'd go out of my way for. But hey, it's a tradition. The original one is Banketbakkerij Jan de Groot near the train station.

Where to Eat in Den Bosch

Simon and I are vegan and, to complicate things more, Simon is celiac, so finding vegan, gluten-free food is important. Surprisingly, we had no trouble in Den Bosch, thanks to recommendations from our Dutch blogger friend. If you can read Dutch, check out his post on Den Bosch at Around the Globe. 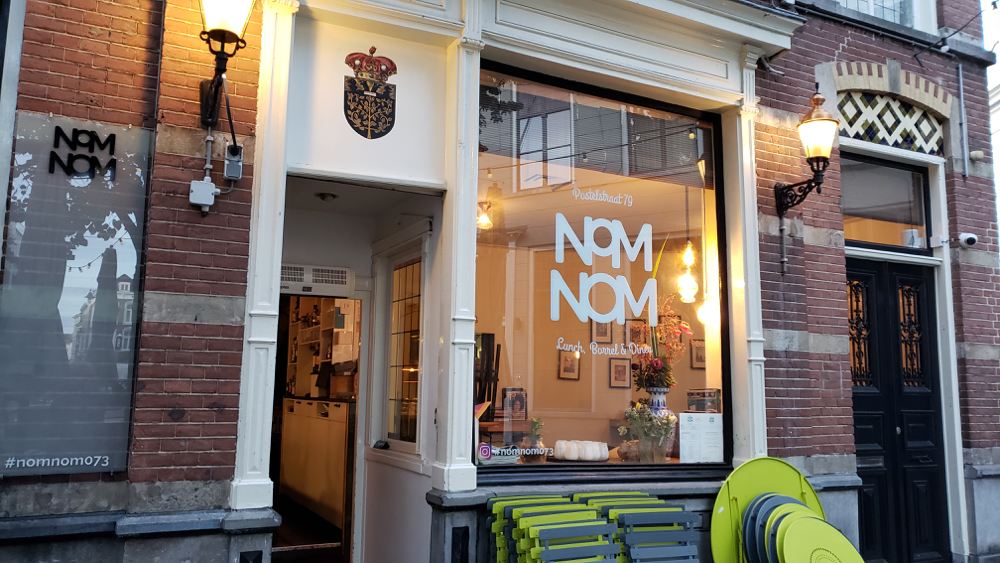 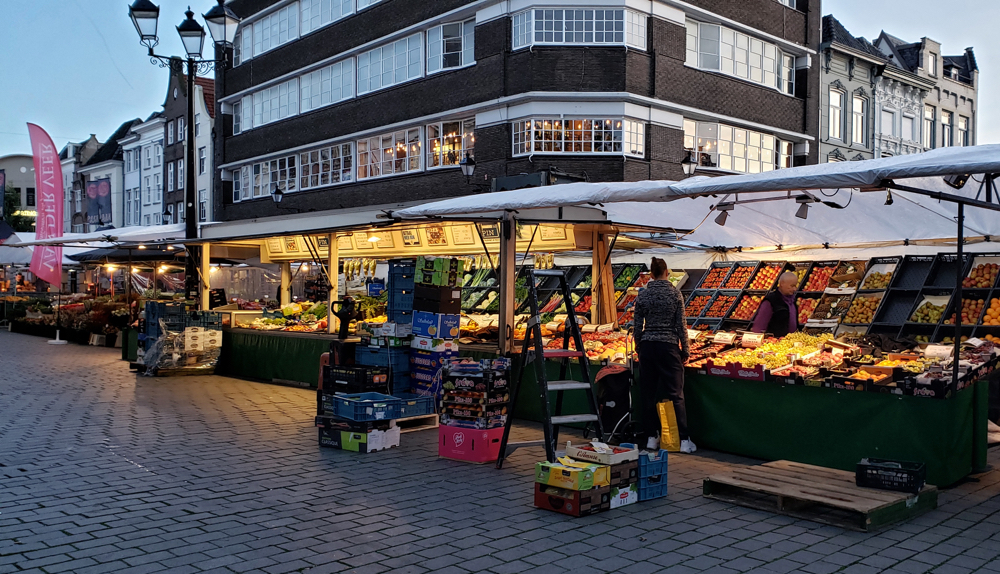 The market in the early morning. Getting ready for customers.

How to Get to Den Bosch

Using Rome2Rio, my favorite site for travel logistics, I learned before leaving that getting from Schiphol Airport to Den Bosch should be easy. I was amazed by just how easy it was.