You are here: Home / How to Travel Alone / Solo Female Travel Tips: Advice from Women Who Know / Dining Solo: A Confession and a Discovery 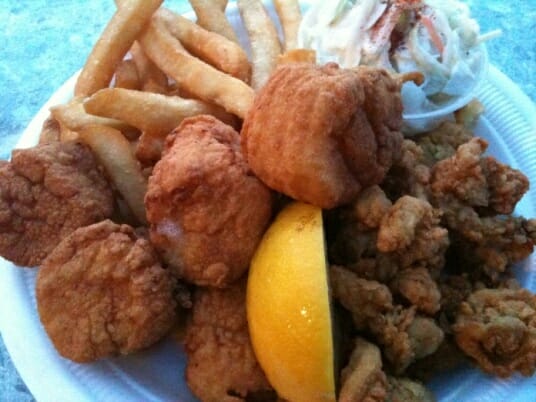 One of the most popular dishes at BG's Boat House: The Half ‘n Half

I have a confession to make.

I have often read comments, both here and on the Solo Travel Society Facebook page, by travelers feeling uncomfortable with dining alone in restaurants, and thought “Huh?”

Dining solo seems to be something that has the potential to cause people to avoid traveling alone altogether.

I found this surprising, and had some trouble understanding how it could be such an enormous obstacle that it could prevent someone from enjoying all of the other benefits of solo travel.

Then, I found myself in Portsmouth, New Hampshire. I had been on a press trip with a group of other writers for several days, courtesy of New Hampshire Tourism, and now I was on my own for a few days. Suddenly, it occurred to me that it had been a very long time since I had eaten dinner alone in a restaurant.

“How can this be?” I thought. I travel alone all the time, and obviously, I eat wherever I go. 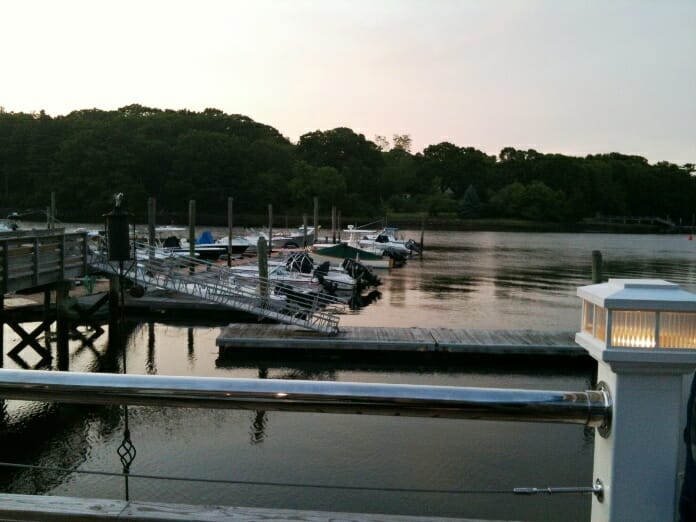 The view of Sagamore Creek from the restaurant deck.

But when I thought about it, I realized that without making a conscious decision to do so, I had begun spending dinner times in different ways. In Paris, I had picked up a baguette, some cheese and a bottle of wine on the way back to my rental apartment, where I would eat as I pored over maps and guides, planning the following day. In Prague, I had eaten a lovely ham sandwich and coffee with milk at a stand-up table in a bakery-cafe while I flipped through schedules and waited for my film to begin at Febio Fest. In New York, I had eaten pizza and beer while watching films underneath the Brooklyn Bridge at the NYC Food Film Festival. And in Barcelona, I had enjoyed paella and crema catalana with other travelers at the end of a cooking class. But sitting at a table by myself in the middle of a restaurant? Not so much.

So I challenged myself to go to a restaurant and dine solo.

I chose BG’s Boat House. I had overheard other travelers and staff talking about it at my hotel. It is an institution in Portsmouth, having been run by the same family since the 70s. They specialize in local fish and seafood-which I love-and have a beautiful deck overlooking Sagamore Creek. 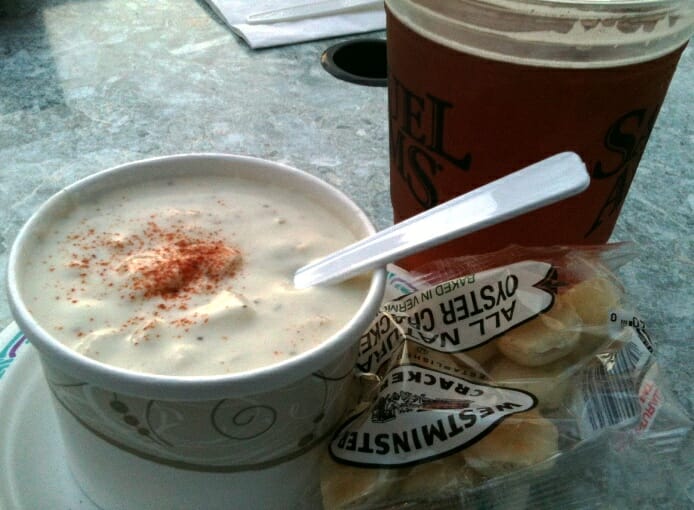 Since it was a lovely summer evening, I decided to sit on the patio. Once I had ordered my meal, I had to figure out what to do with myself. I fussed about with my phone and the menu and flipped through some reading material that I had brought with me. I felt a little awkward as the only solo diner at such a popular place where groups of diners were clearly enjoying themselves. But slowly, I became more aware of my surroundings: the creek before me, the setting sun, the boats docked at the marina, a family of ducks floating by. I actually relaxed into the experience. I enjoyed a local Smutty Nose Shoals Pale Ale. I warmed up with some clam chowder. I worked my way through the biggest, juiciest, freshest fried scallops I had ever had, along with the best tartar sauce ever (apparently the secret is lots of dill pickle).

I had completely forgotten my earlier discomfort. I felt completely at ease and welcome, even when the sun went down and I was the last hold-out on the deck. And I realized how much I had been missing by avoiding dining alone. 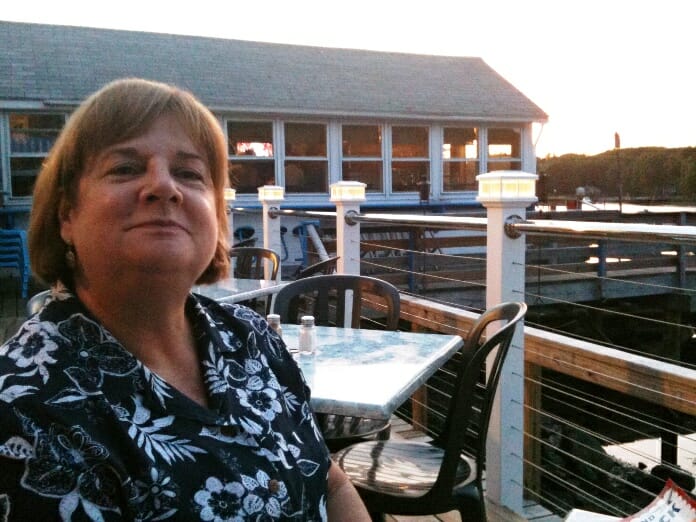 Linda Graves is proud of what her family has accomplished. With good reason.

In speaking with Linda Graves, whose entire family works at BG’s, I made an unexpected discovery. She trains her staff to be sensitive to solo diners who may not be entirely comfortable. They can choose any table in the restaurant-in the center of the room, in a quiet corner, on the open-air deck or covered patio-or they can eat at the bar. Customers are never greeted with “Just one?” or “Only you?”  In addition to catering to new solo diners, this policy is intended to help keep existing customers. BG’s has many loyal local customers who have been with them for years. Linda has seen a lot of these women outlive their husbands, and she wants to make sure that they don’t stop coming to the restaurant just because they are shy about eating on their own.

I couldn’t have had a better experience to ease me back into solo dining.

I understand the trepidation. I know the feeling of needing to be “busy” with a book or a computer in the absence of a dining companion. But I encourage you to push through it. Engage the staff in conversation. Eat at the bar, which will naturally be more social. Get a seat on a patio and people-watch or gaze at a sunset. Or just sit with yourself, soak up the atmosphere and really experience your food. However you do it, enjoying your meals is an important part of solo travel that you don’t want to miss.