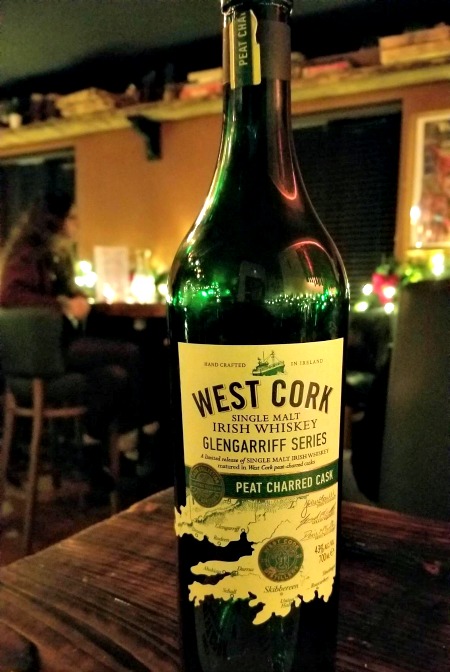 Rather than Discovering Irish Whiskey, this article might just as easily be called, How I Traveled to Ireland and Tried–and Failed–to Become a Whiskey Drinker.

One of the things I was looking forward to on my recent trip to Ireland was the opportunity to taste a variety of Irish whiskeys, pick a favorite, and return home with a bottle to share with friends. I had beautiful whiskey glasses waiting. I had a ridiculously expensive Tiffany decanter. I was ready.

Things didn't quite work out as I'd hoped.

I so want to be a whiskey drinker. It conjures up images for me of relaxed sophistication. Amber liquid in a cut crystal glass. A tufted leather armchair by a roaring fire.  Dark wood-paneled walls with lots of books. Deep conversation. The epitome of cool.

I began my Irish whiskey education at Teeling's Distillery in Dublin.

Teeling's is the new kid on the block here. When they opened in 2015, Teeling's was the first new whiskey distillery to open in the city for over 125 years. As the legal requirement for using the term Irish Whiskey is that it has spent a minimum of three years maturing on the island of Ireland, their first whiskey was released in 2018.

Teeling Whiskey Distillery offers a tour which walks you through their production process, then ends with a tasting. It all begins with barley, a mixture of malted and unmalted. Hot water is added to extract the starch, and after several hours of raking through, a warm, sugary liquid called “wort” is strained off. 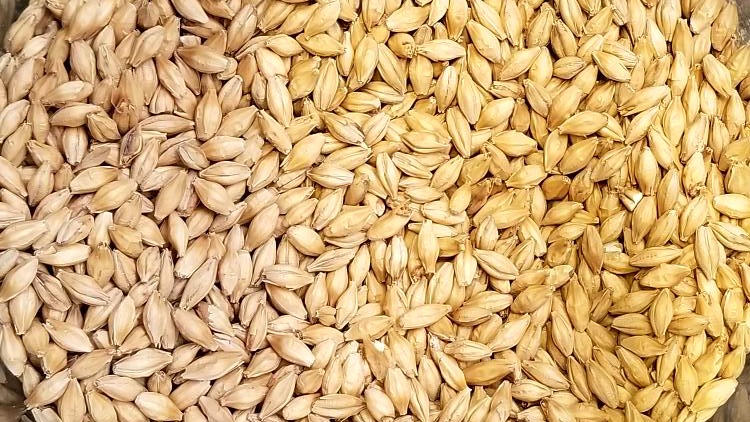 This is where it all starts: the barley.

Next comes the fermenting phase. Yeast is added to the wort to create beer, called wash, and over several days this ferments in both wood and stainless steel vessels. It then moves on to copper pot stills – named Alison, Natalie, and Rebecca, after the daughters of Jack Teeling – where it is triple distilled. 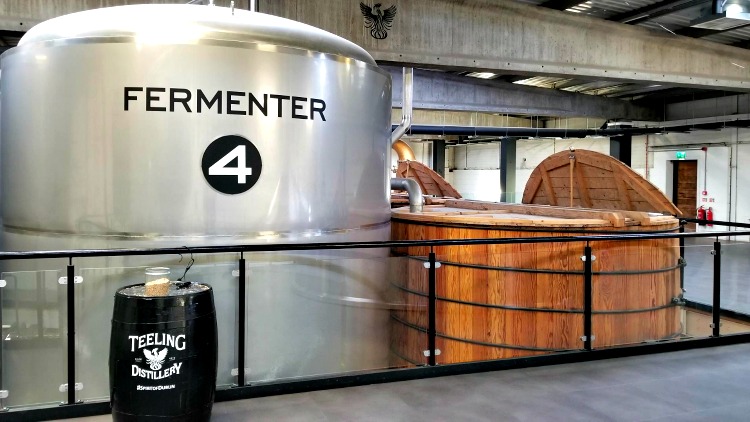 The final step is maturation. Up to 60% of the flavor comes from this part of the process, where the whiskey rests in oak barrels. At Teeling's, they add unique flavors by using casks that had previously been used to age rum and wine. 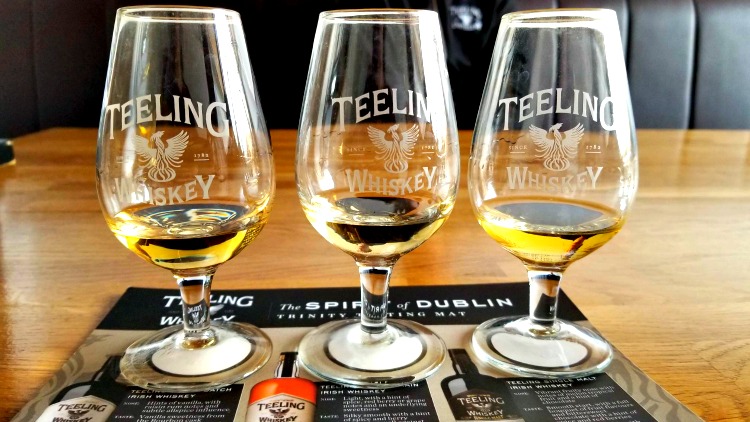 Saving the best for last, the tour concluded with a guided tasting of three whiskeys. Now, I have been to many wine tastings (as well as a number of beer tastings, and a variety of one-off samplings of rums, liqueurs, and other products), so I wasn't expecting this to be any different. Surprise! I didn't know how to taste Irish whiskey. I couldn't pick out the flavors. Words like soft and smooth made no sense to me because I really could only taste alcohol, and I found it so strong that I couldn't properly enjoy it. Much to my embarrassment, I realized that I have not developed a palate for whiskey.

Our tour guide was fabulous, sharing with us the perfect combination of education and fun. There were only two other people on the tour this day, a friendly couple on a mini-break from Manchester, and we had a great time. It was a fabulous start towards my goal of discovering Irish whiskey.

I call this my Accidental Tasting. I had started the evening with a private tour and tasting at the Franciscan Well Brewery in Cork. As I had discovered on my near-private tour at Teeling's, December is a great month to visit Ireland if you don't like crowds and appreciate personal attention on tours. I loved it!

Following the tour, I was led through a tasting of 3 different beers. I am a slow beer drinker, so after the educational part of the tasting, I relaxed and enjoyed the rest of my samples. Just as I was contemplating ordering some food, a woman came by my table and invited me to go upstairs for a whiskey tasting. Eager to continue my exploration, I jumped at the opportunity. 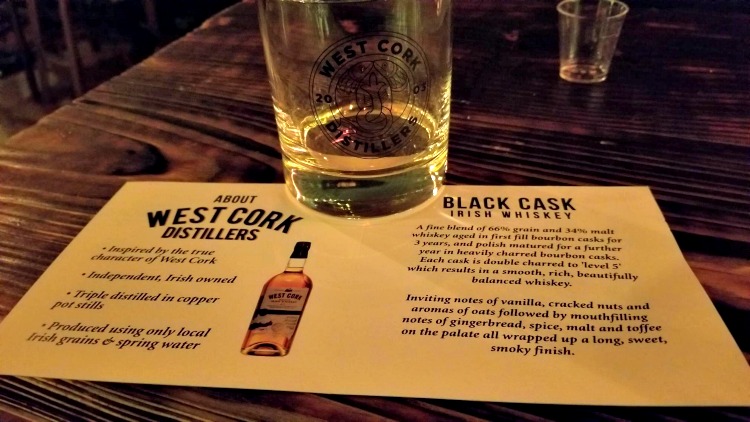 “Upstairs” turned out to be a new cocktail bar above the brewpub, called Monk. The tasting turned out to be a complimentary introduction to the whiskies of West Cork Distillers. It was a laid-back, entertaining time, made all the more fun by a local couple who invited me to join them at their table.

As you can see in the photo above, there were many flavors that I was looking to discern in my glass. I failed miserably. I tasted the vanilla, maybe because it's a common element that I am accustomed to picking up in wines, but as for the finer notes, they escaped me. But at least this was something! It also became clear that I enjoy the sweeter tastes in my whiskey.

My third and final tasting came at the end of my second distillery tour. In contrast to the brand spanking new facility at Teeling's, the tour of the Jameson Midleton Distillery in County Cork offered a more historical view. Some of the buildings on this 15-acre site date back to the late 1700s. All Jameson whiskey has been made in this location since 1975, when they moved their operations to Midleton from Dublin. The Bow Street location in Dublin continues to offer tours and tastings. 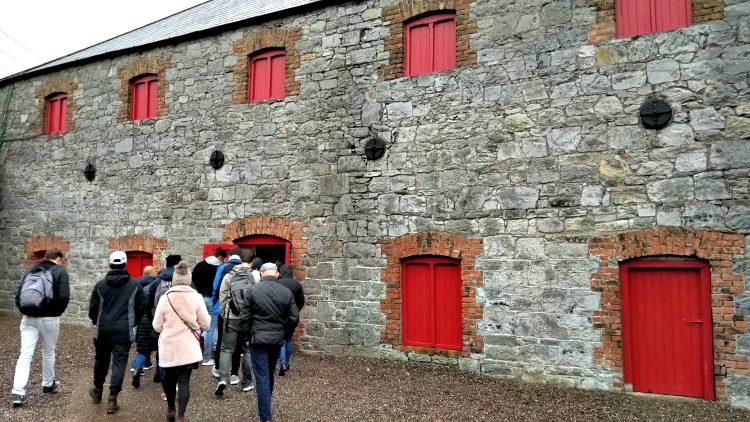 Taking a tour of the Jameson Distillery.

Because Jameson is an internationally known brand, I suspect this tour is very popular. There were at least 15 of us gathered on this rainy afternoon. We walked around the facility, which combined historical buildings and state-of-the-art equipment.

Jameson has many fans around the world, including Lady Gaga, who reportedly said, “I have made so much of my music with Jameson. I'm not being paid a cent to advertise the whiskey… I should be. The whiskey has made my new songs.” 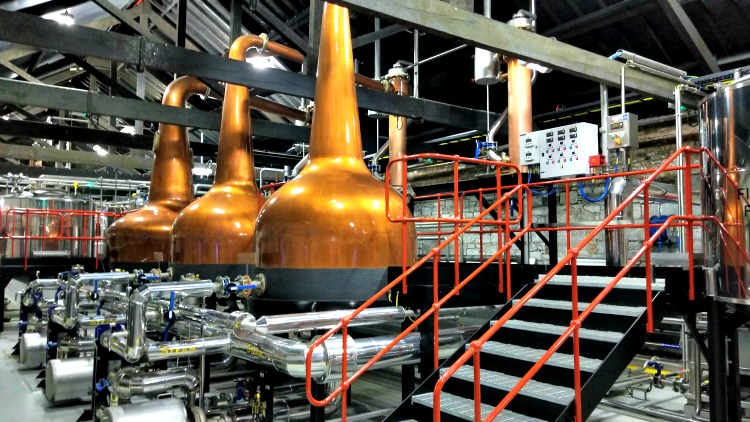 The copper stills at Jameson's.

One of my favorite parts of the tour was seeing the barrels of Irish whiskey aging. In this dimly-lit area you can experience what they call “the angel's share.” While whiskey is maturing in these casks, because of the porous nature of the wood, there is a small amount of evaporation (somewhere around 2% per year). This vapor was named the angel's share because it rises into the heavens.

The smell in this building is incredible. It is sweet and oaky – coincidentally, the very flavors I liked in the last Irish whiskey that I had tasted. I could have lingered here for a very long time. 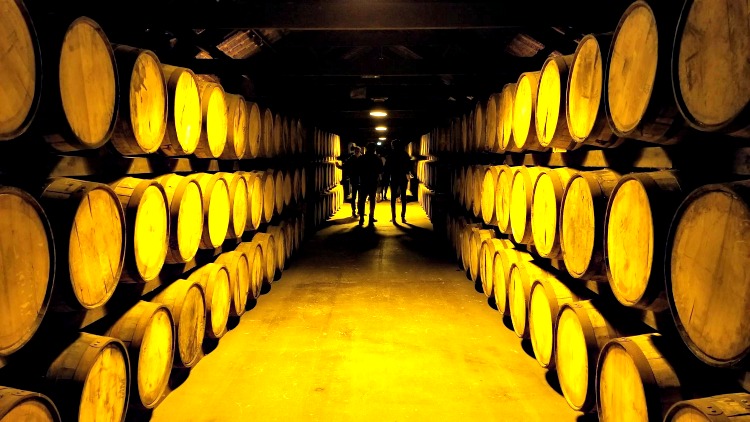 Barrels of whiskey aging. It smelled great in here!

At the end of the tour, it was time for another tasting. Again, I did not live up to my goal of becoming a whiskey drinker. My palate was overwhelmed. Apparently, I am only suited for the angel's share.

Given that Irish Whiskey is the fastest-growing premium spirits category, and sales in the US alone have increased over 500% in the last 10 years, I suspect I’m more disappointed in myself than you are.

In the end, I came home empty-handed. But I will not be deterred! One day, I assure you, you will find me sitting at the bar, raising a glass of Irish whiskey, cool as all get out.

Thank you to Tourism Ireland for sponsoring this trip. As always, Solo Traveler maintains full editorial control over all content on this site.