You are here: Home / Solo Travel Destinations / Oceania / Australia / Excursions and Discoveries On and Off The Ghan 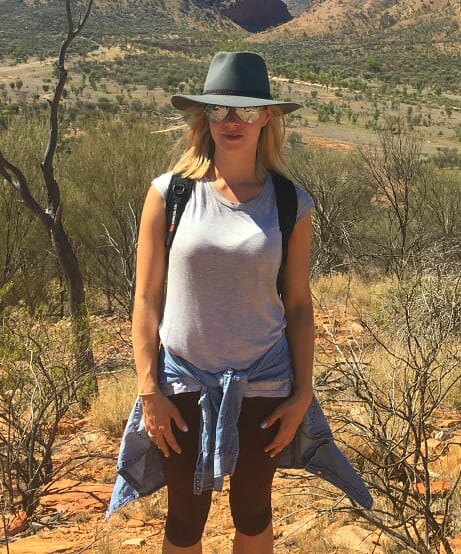 Be prepared for the climate: a hat, sunglasses, and protective clothing are a must.

My recent trip on The Ghan, one of the world's legendary train journeys, was a revelation. I relaxed, admired stunning vistas, had fascinating conversations with fellow passengers, and explored areas of Australia I had never before seen. Following is an outline of my itinerary, including the off-train excursions, along the Adelaide to Darwin route.

Day 1: Settling In on The Ghan

After a nail-biting start in Sydney, which you can read more about here, I finally arrived in Adelaide where I was collected at the airport and ferried to the train station in luxury and style by a car that had been pre-arranged for me.

Once aboard, and shown to my single gold service cabin, a friendly member of the staff came and explained everything I needed to know as well as confirming my excursion choices for the following two days. Then it was off to lunch where I enjoyed a perfectly cooked steak and a few glasses of beautiful red wine.

The rest of the afternoon was spent gazing out my window and reading my book before heading back to the restaurant for dinner and then finally back to my cabin where I found my bed turned down (complete with chocolates on my pillow). The gentle swaying motion of the train made me sleep like a baby. What a great start to the trip!

Though I had big plans to spend my first morning sleeping in, I couldn’t pass up the opportunity to watch the sunrise in the outback. The Ghan offers its Darwin-bound Gold and Platinum guests this unique and beautiful experience as part of the journey with an early morning stop in Marla. Coffee, tea, and light breakfast refreshments were offered as we stepped off the train. We were guided into the outback by the glow of a bonfire which lit up the dark morning sky. It was incredible to see the landscape present itself slowly as the light changed.

After a rest and another feed (you will not go hungry on this journey!) I was ready to stretch my legs and see what was beyond the beautiful desert landscape outside my window. 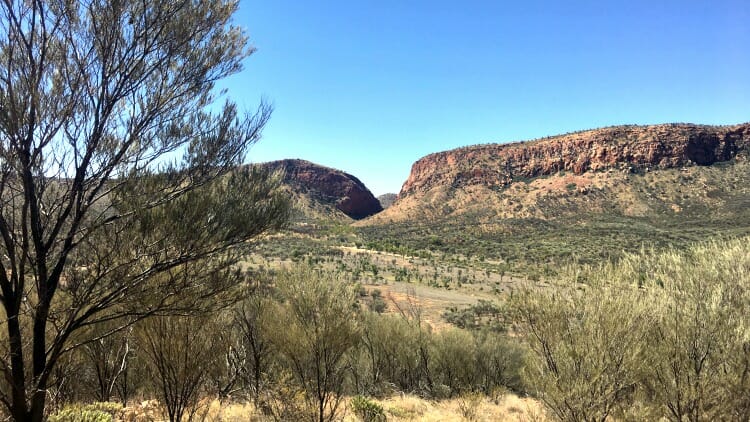 The Ghan offers its Gold Class passengers a variety of off-train excursions to choose from each day that include bushwalks, river cruises, cultural immersion experiences and even (for an additional fee) camel rides and helicopter flights.

For my first excursion, I chose The Simpsons Gap Discovery Walk.

Simpsons Gap or Rungutjirpa, as it is called by the Arrente People, the original owners and inhabitants of the land, is a stunning gap in the West MacDonnell Ranges 18 km west of Alice Springs.

It’s easy to forget the conditions outdoors while inside the lovely air conditioned train, but the moment you step off, the hot air hits you like a wall. Even the short trip from the platform to the bus had most of our group drenched in sweat. It’s important to consider the climate if planning to do any bushwalking in the Northern Territories. Locals recommend avoiding strenuous activities in the summer months (December to February) when temperatures can reach highs of 45 degrees Celsius. 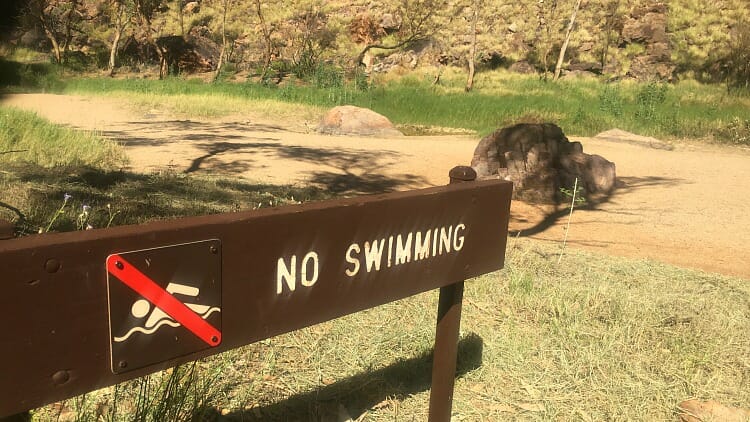 The dry riverbed we walked along to reach the second site of the excursion at Simpsons Gap.

Make sure that you bring a hat, sunglasses, plenty of water, and sunscreen. It is also recommended that you wear long pants and solid footwear for this excursion to protect your feet, ankles, and legs from snake bites.

Once you have arrived it’s about a 20-minute walk from the car park up a small hill which brings you to a lovely elevated vantage point for enjoying the view and taking photos. As someone who is fairly fit, I would say the walk was moderate to easy but there were some in our group with less mobility who found the combination of heat and walking uphill quite challenging.

The area is well known for Black-footed Rock-wallabies but I wasn’t lucky enough to spot any. Our guide told us early morning is the best time to catch them.

There is a second walk along the riverbed (which was dry on my visit) that we arrived at after another short journey aboard the bus. While it wasn’t the main attraction, this was by far my favorite portion of the visit. The small shimmering creek I happened upon at the end of the riverbed appeared as an oasis and there was a gentle breeze blowing which provided welcome relief from the heat. 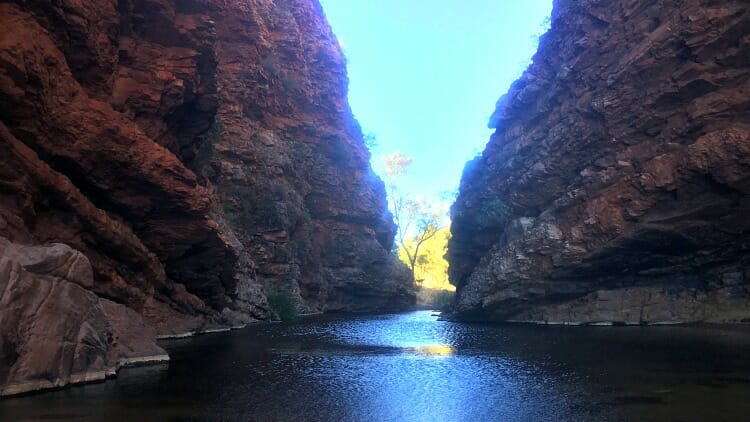 Oasis found! A slice of paradise in the Outback at Simpsons Gap.

For seasoned hikers who have the time to spare and the appetite for more advanced level bushwalking, Simpsons Gap is just one of several attractions along the Larapinta Trail that begins at the old Alice Springs Telegraph Station and stretches over 223 km along the West MacDonnell Ranges. The track is divided into 12 sections, each one taking 1-2 days to walk. In either event, Simpsons Gap itself is well worth a look-in whether traveling aboard The Ghan or just touring Alice Springs.

Day 3: Cruising on the Katherine River

After another great night’s sleep and a hearty breakfast, I was ready for my second excursion, a cruise down the Katherine River that meanders through Nitmiluk National Park. The tour company and the National Park itself are owned by the Jawoyn people through a 99-year lease from the Northern Territory Parks and Wildlife Commission.

The term Jawoyn is used to describe language, culture, people, and territory and encompasses 17 separate clans. Just as impressive as the scenery was our tour guide, a member of the Jawoyn Association who shared with us the native lore that the Jawoyn call Dreamtime, which explains how the world was first created. 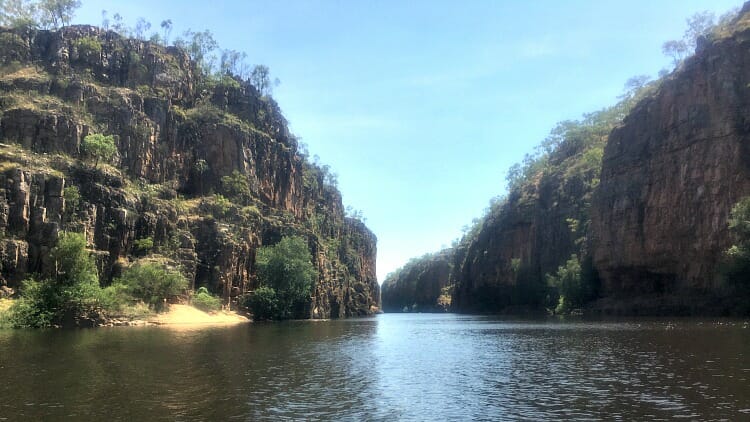 Enjoy the scenery and the Aborginal culture teachings on the Nitmiluk River Cruise.

Dreamtime stories often tell of how a Rainbow Serpent came from beneath the ground to create mountains and gorges. The waterways that surround such natural landscape are often compared with that of a snake. There is a popular children’s book in Australia called The Rainbow Serpent by Dick Roughsey that details this further for those interested.

And of course there are the crocs! A few popped up on our cruise but my poor distance vision meant they looked more like logs than anything else to me. Not that I was complaining. I have had a healthy amount of fear for crocodiles ever since watching this scene from Aussie cult classic Crocodile Dundee where Linda Kozlowski’s character, Sue is nearly dragged underwater by a croc. In the Northern Territories they have a program they call Crocwise that educates people on how to stay safe in and around bodies of water. Suffice it to say, despite the extreme heat, I didn’t dangle any feet or hands into the water to cool down!

Our cruise excursion lasted about 2 hours but for those wanting to explore the gorge more deeply, there are canoe expeditions and you can even camp by tent or caravan in the National Park. Check out all the options here. 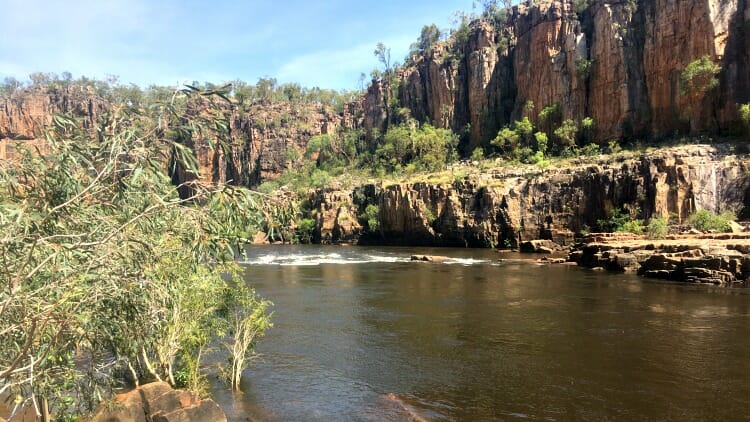 Cruising along the Nitmiluk Gorge.

Once back aboard the train I headed to the dining car for my final meal aboard The Ghan, where I met a lovely fellow passenger whose personal story made me think more deeply about my own approach to the world around me. You can read more about that in Transformed on The Ghan.

As the day turned into late afternoon we arrived in Darwin and I headed off to my hotel to drop my bags before heading out to dinner at the famed Hanuman Restaurant for some delicious Asian fare that includes Thai, Indonesian, Indian, and Singaporean influences. Open for over 25 years, Hanuman is a culinary experience not to be missed.

I awoke early in Darwin, keen to check out a coffee shop I’d read about prior to arriving. Using Google Maps as my guide I made the foolish decision to walk the approximately 5 km from downtown Darwin to Laneway Specialty Coffee. I hadn’t anticipated that it would get so hot, so early and by the time I arrived I was drenched in sweat. Luckily, while the coffee was hot, the air inside was cool and I enjoyed a delicious soy latte and healthy hipster breakfast that wouldn’t be out of place in Sydney. Sadly, by the time I arrived back at the hotel it was time to pack my bags and head to the airport so I didn’t get to explore Darwin properly. It gives me a good reason to plan another trip to the Northern Territories, though, as there is still so much to see!

Thank you to Great Southern Rail Australia, The Ghan for sponsoring this trip. As always, editorial control is maintained by Solo Traveler, and all opinions are our own.