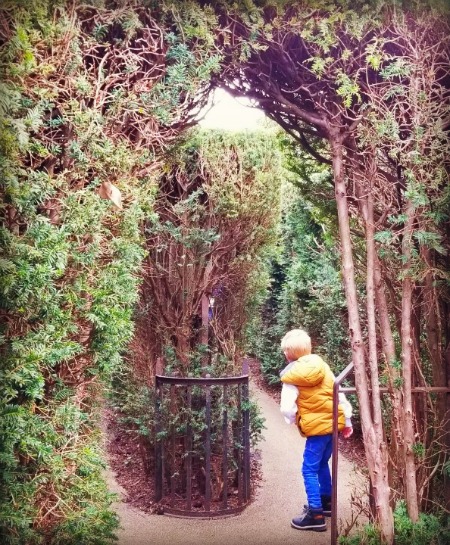 I wasn't the only one having trouble deciding which path to take to get our of the maze at Hampton Court Palace.

Solo travel is many wonderful things.

Easy is not always one of them.

While I love getting to do whatever I want, whenever and however I want to do it, there are times when it would be nice not to have to do every single bit of the work that goes along with making it happen.

Falling somewhere between an organized tour and an independent trip, Monograms takes some of the labor off your hands, leaving you more time to explore and enjoy your destination. I traveled in London and Amsterdam with them this fall to see what exactly it is that they offer.

Friendly Faces at the Airport

My flight was late arriving in London, and by the time all but one other passenger had left the baggage area, it seemed that my luggage hadn’t made it at all. Eventually, we found it, but by then, an hour and a half had passed and I was worried that my driver would have given up on me as well.

When I eventually emerged, frustrated and irritable, I expected that I would then have to find my way into the city and to my hotel on my own, and that I would have inconvenienced the driver that Monograms had sent to pick me up. 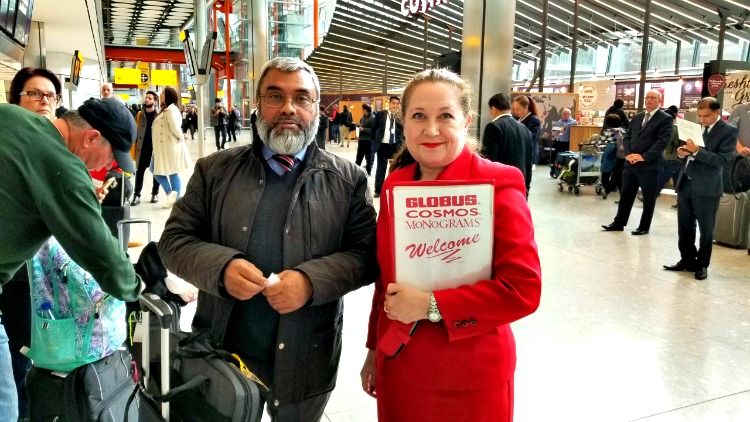 It was so nice to be greeted by friendly faces.

I needn’t have worried, though: the driver and a Monograms representative were waiting, patient and sympathetic. I was relieved of my luggage, whisked away to a waiting car, and delivered to my hotel along with a packet including maps and useful tips on getting around London. It felt like such a treat. And having had a horrible travel experience earlier in this trip, which saw me re-routed from Toronto to Bologna via Montreal, Geneva, and London, arriving 27 hours later with no luggage for 4 days, it was such a relief. I’ve never been met at the airport in this way before. I could get used to this!

A Balance of Organized and Independent

Over three days, I spent time exploring London through both tours and tickets that had been booked for me by Monograms and things I organized on my own or discovered along the way. It made for a nice balance and sort of anchored my days, giving me places to be at certain times and all the rest of the day to do as I pleased. As someone who can waste a lot of time researching and overthinking, it was quite a good fit for me. 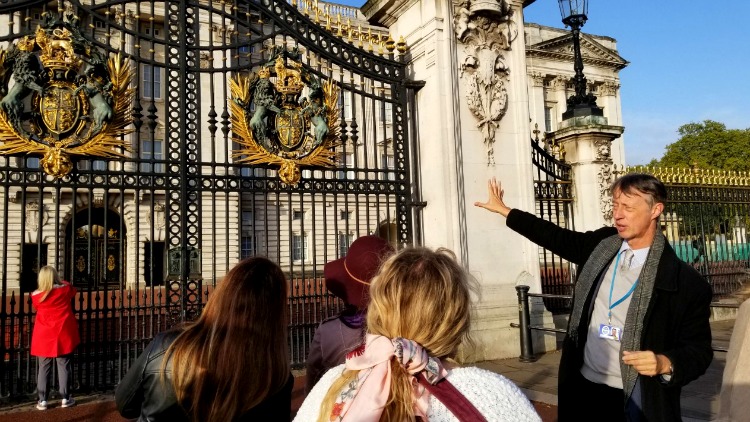 Our expert local guide telling us all about Buckingham Palace.

All Monograms trips begin with a half-day sightseeing tour of the destination, along with other Monograms travelers. Of course, there is no obligation to participate, but I love an overview tour at the beginning of any trip. I found this to be an incredibly informative and well-paced tour. There was seemingly nothing that our guide didn't know about London. It was also a great opportunity to meet other travelers. 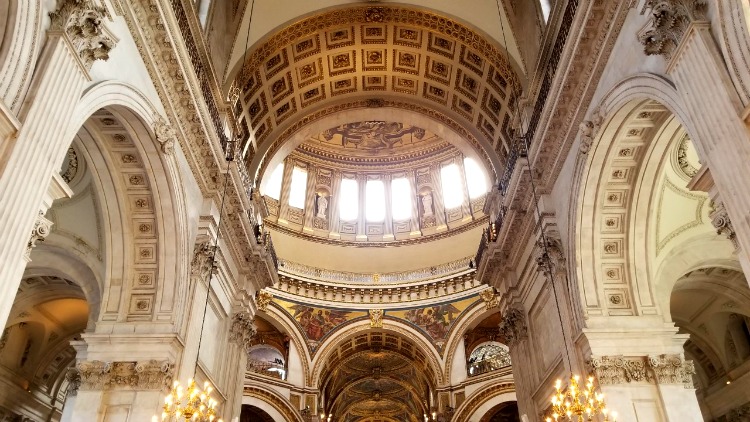 Up, down, sideways – no matter what direction you look, there is beauty to be found in St. Paul's Cathedral.

We stopped in front of Buckingham Palace to take some photos and learn a bit about its history. We had a wonderful tour of St. Paul's Cathedral, including time to grab a coffee at their surprisingly good cafe. We walked for a bit and saw where William Shakespeare had once lived. And in between each of these stops, we covered a lot of ground on a small bus with near-constant commentary from our guide, including history, amusing anecdotes and insider tips for exploring London on our own. 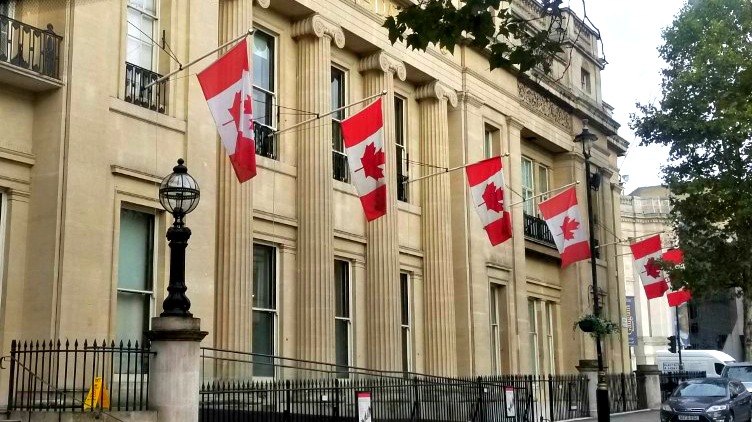 I took this photo of Canada House from the bus, then returned after the tour to visit.

While touring around London, I had spotted a building with a lot of Canadian flags. Later that day, I decided to go back and see what it was. “It” was Canada House, the High Commission of Canada in the United Kingdom. I really didn't know what that meant in practical terms, but there was a sign in front of one of the entrances advertising an exhibit of Canadian art, so I decided to go in. I mean, really, as a traveling Canadian, I felt it would be rude not to pop by. Luckily, the security guard found me more amusing than irritating, and we had a laugh about my accent, my eagerness to stop in and say hello, and the number of times I had to walk through the scanner before I was allowed in. 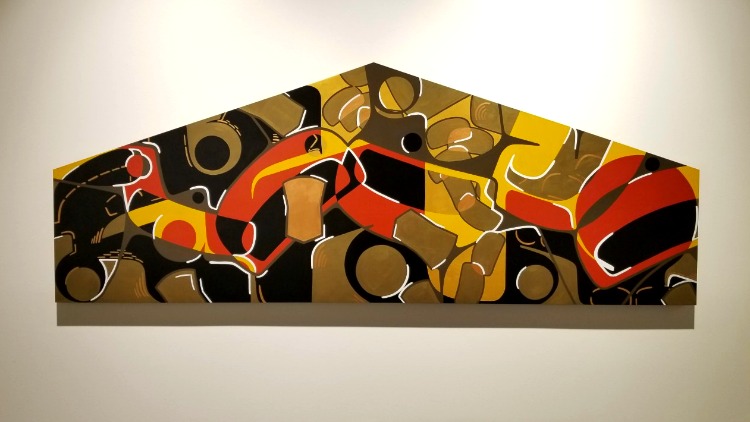 I was lucky to catch this exhibit of Sonny Assu's art before it closed. There are various exhibits at Canada House throughout the year. Admission is free.

Once in, I was able to view an exhibit by First Nations artist, Sonny Assu, entitled A Radical Mixing. I felt very lucky to have stumbled upon this as the exhibit was soon to close. After viewing the small selection of paintings and sculpture, I signed a massive guest book full of signatures of other Canadian travelers. I was so glad to have spotted those flags while on the city tour with Monograms!

Just across the street from Canada House sits the National Gallery. I love this space, and I love how accessible it is, with no admission fee to the general collection (though a donation on the way out is greatly appreciated). The building itself is beautiful to look at, let alone the fact that some of the world's greatest works of art reside here. I enjoyed wandering around at my own pace as well as sitting for a few minutes and watching others take it all in.

A photo taken by a woman of another woman taking a photo of a painting of a third woman.

That evening, it was time for another event that Monograms had teed up for me: a pre-theater dinner followed by a performance of Wicked at the Apollo Victoria Theatre. I can be slightly obsessive about booking tickets – analyzing seating plans, agonizing over dates and times, looking for the best deal – so putting myself in the hands of someone else to arrange this for me was…different. It couldn't have turned out better, though. I had requested an aisle seat, and that's exactly what I got. With my ticket in hand, I walked right in and sat down to enjoy the play. It was fabulous. I ubered back to my hotel, had a glass of wine in the lobby bar, and got a good night's sleep. 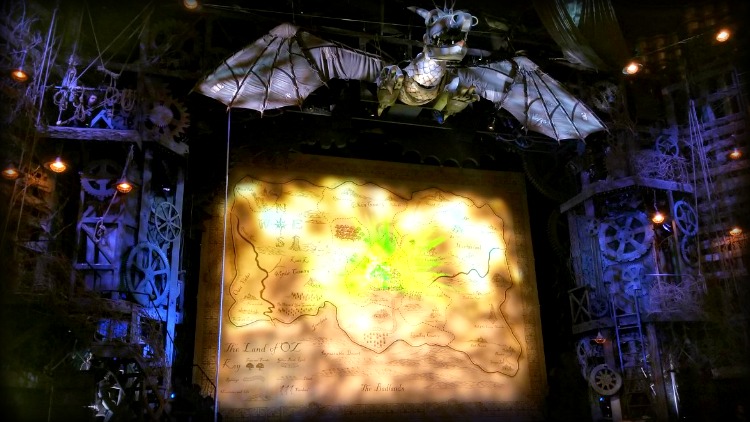 The set of Wicked at the Apollo Voctoria Theatre in London.

Exploring London On My Own Schedule

The next day, I was set to visit Hampton Court Palace. Monograms had booked a ticket for me, so all I had to do was get there and enjoy. I had a few things to do first, though. I needed to catch up on some work and I really needed to do some shopping. After passing so many lovely shops as I was exploring London, I had to make a little bit of time to actually visit a few. No problem. A Monograms host always sets up shop in the lobby of your hotel, and is there to answer questions, provide tips and advice, draw maps, do research, or just check in with you and wish you a great day. I was able to quickly get a handle on the best and fastest way to get where I wanted to go, and I was off! 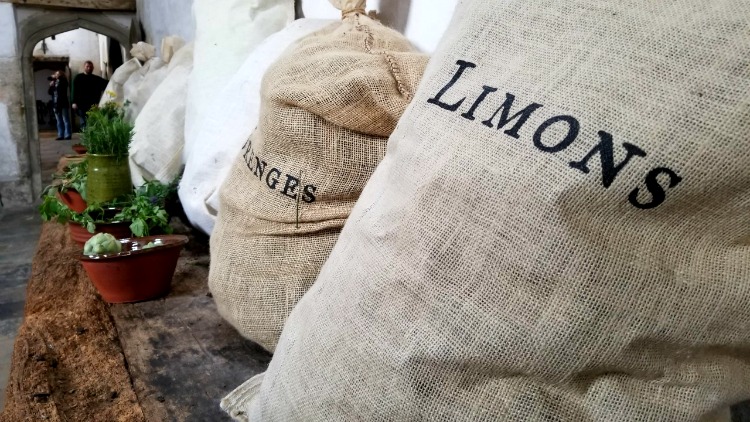 The kitchens at Hampton Court Palace were fascinating to the food geek in me.

I joined forces with another solo traveler on this trip and we explored Hampton Court Palace both together and on our own. We took the train together and toured the parts we were both interested in, then split up and met back at the train station later in the afternoon. It is a massive property with so much to see that what I thought would be a 2-hour trip turned into a 6-hour day. I particularly enjoyed touring the kitchens and imagining what it must have been like to prepare meals for hundreds of people every day. 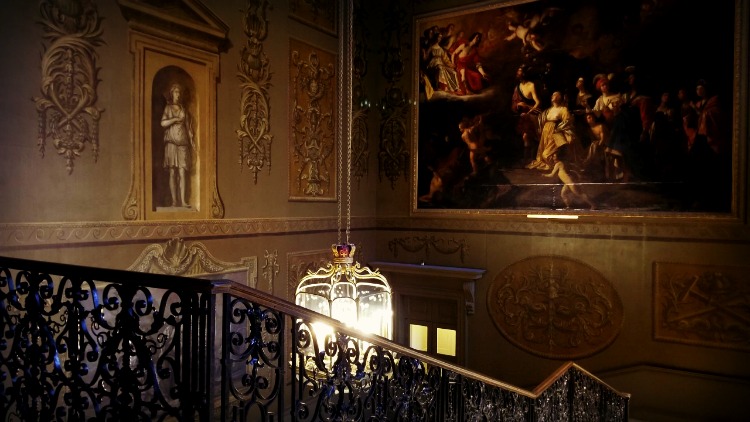 Even the stairwells of Hampton Court Palace were beautiful.

On any solo trip, I like to have one (okay, sometimes more than one) special meal that is a big splurge for me. I worked up an appetite exploring London and I knew exactly where I wanted to dine: Ottolenghi Spitalfields. One of the great things about traveling solo is that I can almost always get into the restaurants I choose, even at the last minute, because I have the flexibility to go whenever there is a free table. This was no exception. I had to eat at 8:30, but I was able to book a table at this very popular restaurant with less than 8 hours notice. Then I did one of my favorite things: I took a copy of TimeOut London and my Monograms itinerary, chatted with my server, enjoyed several different dishes along with complementary wines, checked out what was going on in the city and made notes of things I might like to see and do. It was a lovely solo dining experience. 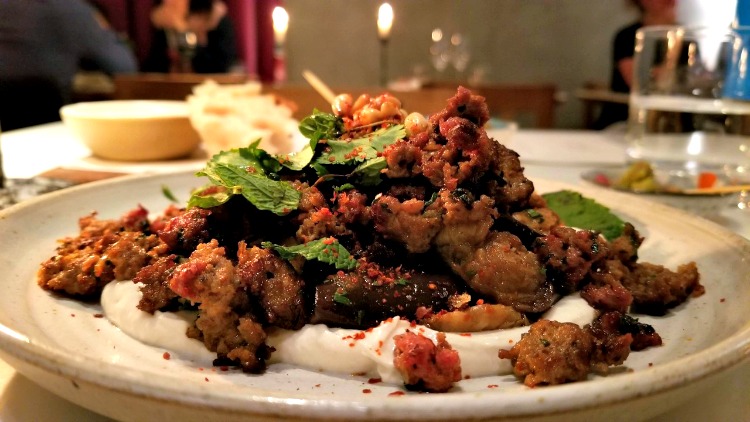 Ottolenghi is a genius. This is lamb fatteh with tahini yoghurt, aubergine, and pine nuts.

I enjoyed the mixture of organized and independent travel on this trip with Monograms. I never felt burdened by having to participate in anything, I spent more than half the time alone. I really enjoyed the introductory tour of the city, and I appreciated the way that many of the frustrating or annoying or time-consuming parts of a trip were eliminated. Having the services of a local host, an expert on all things London, available right in the lobby of the hotel was an incredible benefit of traveling this way. I continued on to Amsterdam with Monograms. Watch for that article in two week's time.

This post was brought to you as a result of the Monograms trip, a project between Monograms and iambassador. As always, Solo Traveler maintains full editorial control of the content published on this site.