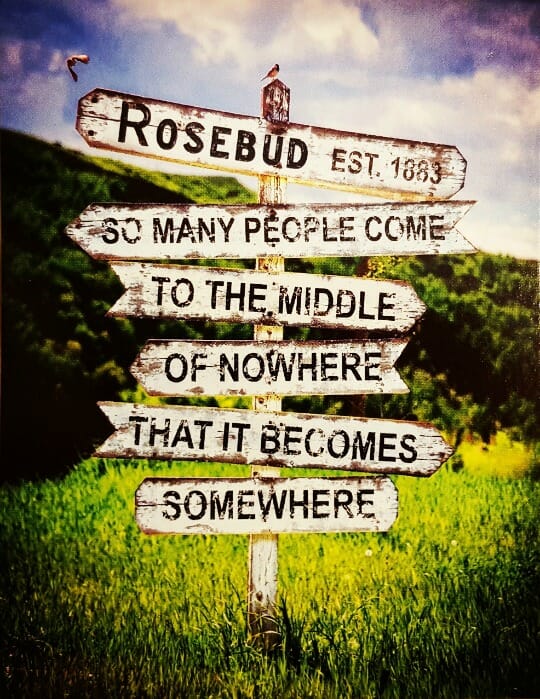 I found this scrawled on the wall between paintings at the Esplanade Arts & Heritage Centre in Medicine Hat, Alberta. It was part of an exhibit called Get There from Here, by artist Nicole Bauberger. Over the course of nine years, Bauberger drove across Canada, stopping every 50 kilometers to paint the landscape at that location—220 small paintings in all. (You can see some of the paintings here.)

Stumbling across this exhibit was serendipitous as I was on a road trip myself at the time, exploring the Canadian Badlands. I even recognized some spots that I had passed on the highway, both on that trip and previous ones. Standing in the middle of the gallery, surrounded on all sides by images of my country, I felt very much at home, even though I had never before visited the area.

The Canadian Badlands are located in Alberta and cover the area from Drumheller to the Saskatchewan border and south to the United States. This region contains the world’s largest deposits of dinosaur bones, unique and varied landscapes, and interesting arts and history. It is a perfect place for a solo road trip.

On the day that I visited the Esplanade, I had intended to also visit Medalta, birthplace of the iconic pottery, but two things slowed me down. I was late arriving in Medicine Hat because shortly after picking up my rental car at the Calgary airport, I got the first speeding ticket of my life–then very strictly adhered to the speed limit for the duration of the trip. Even on long, flat stretches of open road. Even on highways where every single car pulled out and passed me. Even when there was not another car as far as the eye could see. This seemed to displease quite a few Albertans, so I extend my apologies to all of the drivers who had the misfortune of following me. If you've read about my first solo road trip, you will know that this one was a vast improvement.

The second thing that slowed me down was enjoying the art exhibit. It was so unexpected, and so moving, that I spent at least 2 hours in the gallery, getting up close to every painting, reading every inscription, and browsing through the booklets full of comments and impressions from other visitors. This freedom to abandon your itinerary when you discover something that really excites you has to be one of the greatest advantages of solo travel. 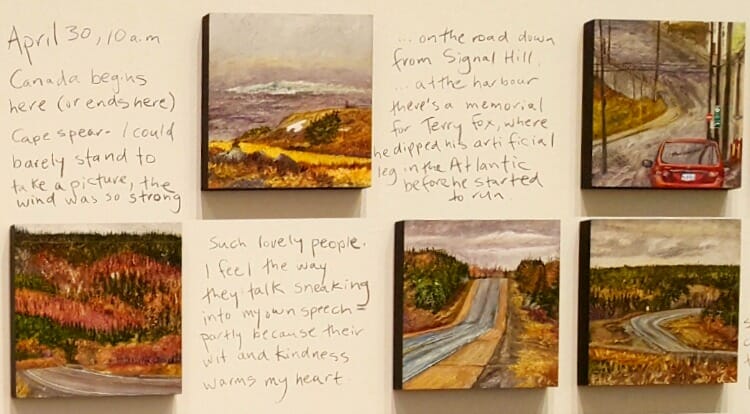 From Get There From Here by Nicole Bauberger

The next day, I explored some of the attractions in and around Drumheller. I am really not a museum-goer or a history buff, but history is an important part of the Canadian Badlands experience–and the people of Drumheller make it fun. I visited the Atlas Coal Mine, which, on the surface did not seem like my cup of tea. Then I noticed that they offered something called the “Unmentionables Tour.” Led by a funny and knowledgeable young guide, this tour focused on the social side of life at the mines during the prohibition era. From potato champagne to houses of ill repute and from chokecherry wine to a madame's legendary fried chicken, this tour made history come alive in an amusing way. Touring a tiny, one room shack that had housed up to five men at a time, walking through a simulation of a coal mine in absolute darkness, and hearing the stories and seeing photographs and artifacts of the miners rounded out the experience.

Touring the Atlas Coal Mine

On my way back to town, I noticed a sign pointing in the direction of the Star Mine Suspension Bridge. I had a bit of time, so I turned off the highway to check it out. I had no intention of walking on the bridge, mind you, as the mere thought of it makes my heart race. I took some photos from near the entrance of the bridge and enjoyed the view of the Red Deer River. But then, something drew me to the bridge–I like to think that the spirit of the Badlands came over me. The next thing I knew, I was walking across the bridge. I was holding on to the sides for dear life and walking very slowly, taking very small steps, but I was doing it! Now, when you see a photo of the bridge, you may well laugh at my fear. It doesn't look scary at all. But when I returned to land, I had to sit down on a bench to recover. My legs were like jelly, I had a headache, I felt nauseous…but I also felt triumphant. I had faced a fear and conquered it, as small as it may seem. 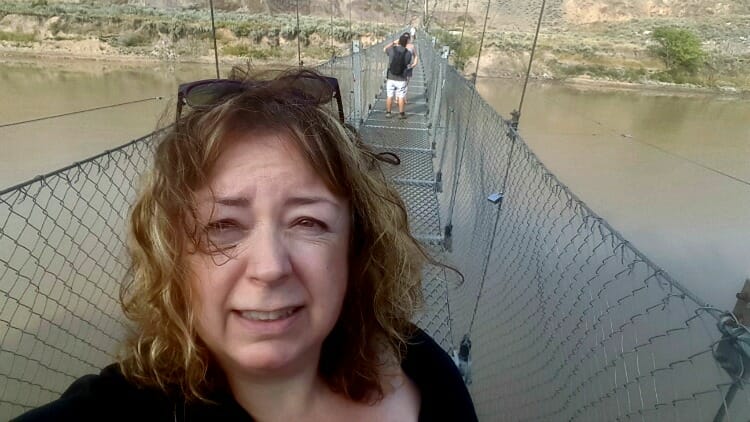 This is the face of fear, mingled with determination to document the moment in order to prove that it actually happened.

Next up: dinosaurs! Over 12.5 million people from 150 countries have traveled to the outskirts of Drumheller, Alberta to visit the Royal Tyrrell Museum of Paleontology. I don't know that many Canadians know about it. Certainly, I did not. They have one of the largest collections of dinosaur skeletons in the world: over 160,000 individual specimens. Even for someone like me, whose knowledge of paleontology begins and ends with Ross on the TV show “Friends,” a visit to the Tyrrell is an astonishing, overwhelming experience. The museum is a world leader in research, and adds thousands of specimens to its collection every year. 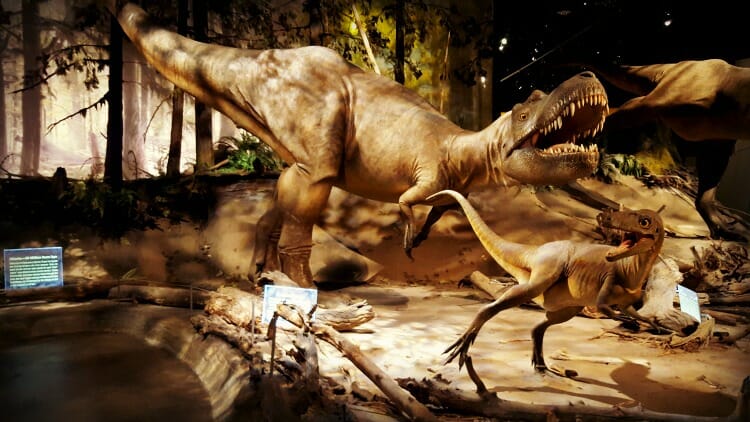 One of the incredible displays at the Royal Tyrrell Museum

One of the quirkier attractions in the Badlands has to be Trekcetera Museum. Formerly located in Vulcan, Alberta, Trekcetera features a wide array of costumes, props, and various memorabilia related to Star Trek. To add some diversity to their collection, they also display similar artifacts from a variety of other television shows and movies. Arriving near closing time, I expected to just do a quick run-through of the museum. Much to my surprise, I was given an animated, detailed, anecdote-filled tour by one of the guides. He was extremely knowledgeable about each of the shows represented and the items on display and presented it all in such an enthusiastic manner that I was pulled along by his energy and spirit. 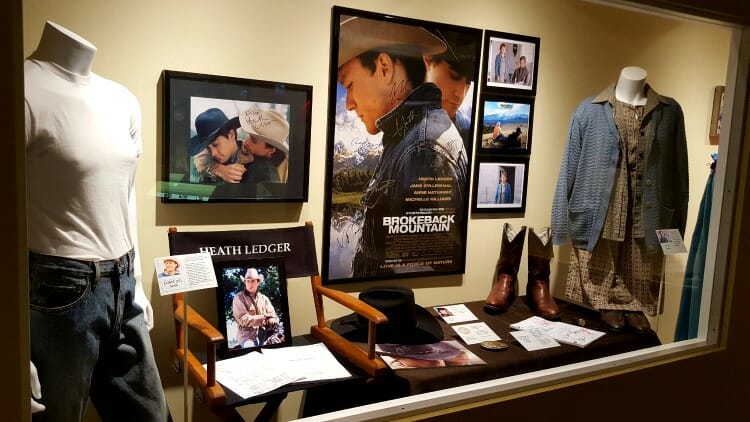 The Brokeback Mountain display at the Trekcetera Museum

On the last day of my road trip, I headed to a place that really illustrates the spirit of the Canadian Badlands: Rosebud, Alberta. Imagine an entire town sprouting up to support a performing arts school and a theatre! This tiny hamlet of about 100 people exists largely because of the Rosebud School of the Arts and the Rosebud Theatre. Over 35,000 people make the trip every year to enjoy a play, have lunch, and wander through the shops. To be honest, I didn’t expect much when I heard about a small town in the middle of nowhere with its own theater, but I was thrilled to discover that their performance of The Spitfire Grill was entirely professional, and on par with any big-city production.

Rosebud doesn’t have a grocery store or a gas station or any of the conveniences of a larger community, so you know that those who live there truly want to be there. As they say in Rosebud, “so many people come to the middle of nowhere that it becomes somewhere.” 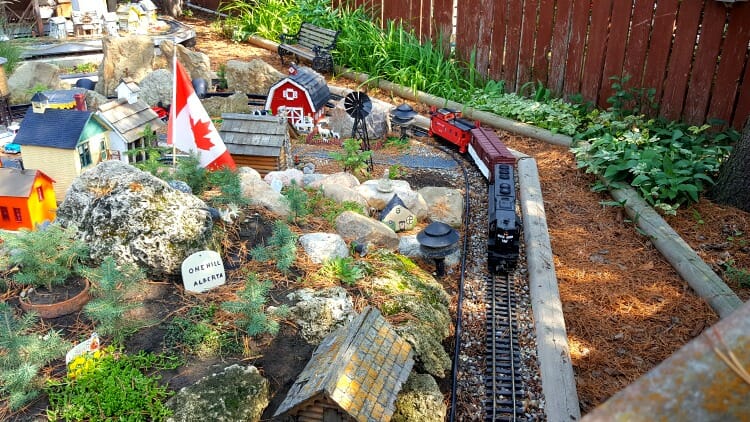 Rosebud is the kind of place where a resident builds an extensive model train and community on his front lawn for the enjoyment of all.

This trip was supported by Canadian Badlands Tourism. All experiences, opinions, and speeding tickets are mine.