You are here: Home / Solo Travel Destinations / Asia / China / I Was a Guest of the Chinese Healthcare System 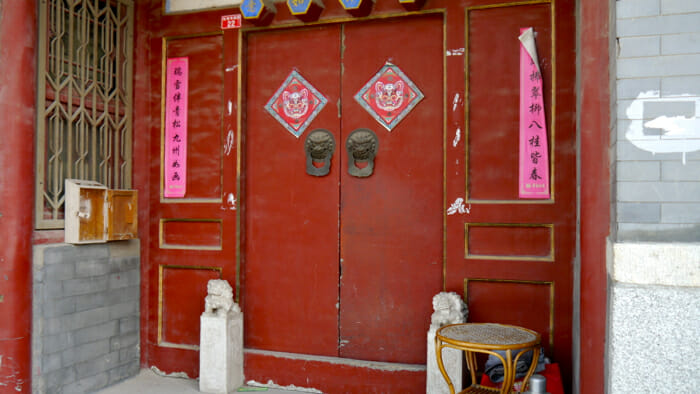 My father got me onto appreciating doors. I don't think he ever considered the consequences.

Suddenly, the pavement was at my face. Or, more accurately, my face became part of the pavement.

All for the sake of another photo of a beautiful door.

When I was a child, my father taught me to appreciate doors by pointing out the best while driving up and down the streets of Westmount in Montreal. On my travels, I continue to enjoy the craftsmanship, design and cultural nuances of doors. From Italy to Chile to China and points in between, I have taken pictures of doors.

But in the Hutong of Beijing, this obsession resulted in injury and an introduction to the Chinese healthcare system. 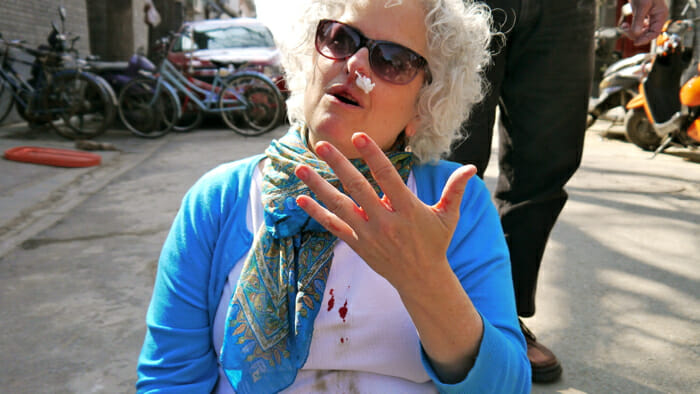 I sat on the ground for a while to collect myself but it took only moments for me to ask for photos – this had to be shared on the blog.

As accidents go, this one was simple. There were not multiple factors at play – only a cement post about 10 inches in diameter and twenty inches high on my right that I hadn't noticed. Once I'd got my photo of the door, I turned to my right to run and catch up with the group and was immediately flipped and thrown onto my face. My left arm took the majority of the impact but the blood flowing out of my nose drew everyone's attention.

Fortunately, on this trip, I was traveling with a group. I was the guest of Overseas Adventure Travel, a company that specializes in small group trips that take one behind the usual activities available in a country. We had just come from the home of a woman in the Beijing Hutong where we'd had a home-cooked meal and learned to make dumplings.

The reaction of the group was swift. A retired school principal and a teacher were on the spot quickly. A physiotherapist was close behind. As someone who has always traveled alone in the past, this was a moment that made me appreciate group travel.

(What would I have done had I been traveling totally solo? There were Chinese around who also tried to help with Kleenex and wipes. I'm sure I would have been ok.)

The blood would not stop flowing from my nose no matter how much Kleenex we stuffed up it so, once I had collected myself, we decided to get me up and head back to the bus.

On the bus I lay down on the back seat and the physiotherapist did his magic on my still bleeding nose. With me fully reclined, he held my leg extended and gave the bottom of my foot a good whack. He did the same on the other foot for good measure even though one should have worked. I sat up and we waited thirty seconds as we didn't want to dislodge a clot. Then, pulling the Kleenex out of my nose very gently, it was confirmed. The massive blood flow had stopped completely. 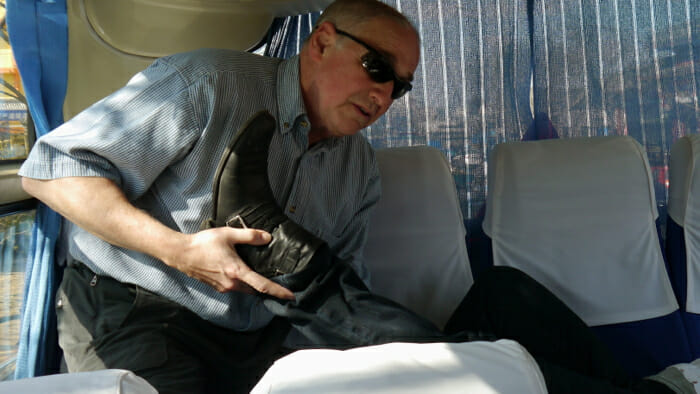 Now this is a unique technique for stopping a nose bleed – whack the bottom of the foot on the same side as the nostril that's spilling blood.

The Real Injury Had Nothing To Do with the Blood

Blood gets a lot of attention. But once the bleeding had stopped and I passed through a period of shock (my heart rate dipped to the mid 40's), the real injury became clear. It was my arm that had incurred the most damage.

That night we took an overnight train from Beijing to Xian. In the narrow bunks there was no position for my arm that was comfortable. The pain kept me up most of the night. As I massaged it for hours, using my rudimentary knowledge of acupressure (shiatsu), it suddenly occurred to me that I was in China, where acupuncture originated, and acupuncture was exactly what this injury needed.

Once we got to our hotel that morning, I immediately started to work with the hotel concierge and our tour guide to find a clinic where I could be treated. 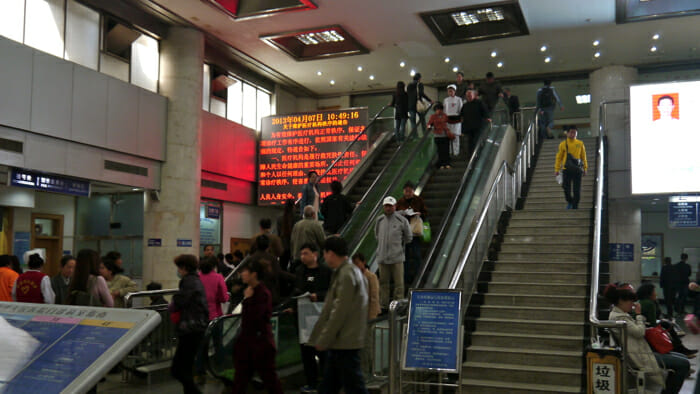 A Guest of the Chinese Healthcare System

While the rest of the group spent the morning settling into the hotel, Alex, our tour guide, and I headed to the hospital. We only had two hours before Alex had to be onto the next stage of the trip with the group. I really didn't think we could possibly do everything in that time frame but we did.

Upon arriving at the hospital, we went to registration. A decision was required: I could register as a foreigner and get a doctor who spoke English or I could register as a local, more or less. We debated the issue. Which doctor would be better? I decided to go the local route as I had Alex as a translator and, we thought, the English speaking doctor might only be better in language, not medicine.

Once registered, we went to the third floor for the acupuncture department. As you can see from the photo above, the hospital in China was not that different from older ones in North America. Yes, the ceilings were a bit lower, the lights had the glare of fluorescent bulbs and it needed paint but the halls were wide, the design functional and the system worked very efficiently. 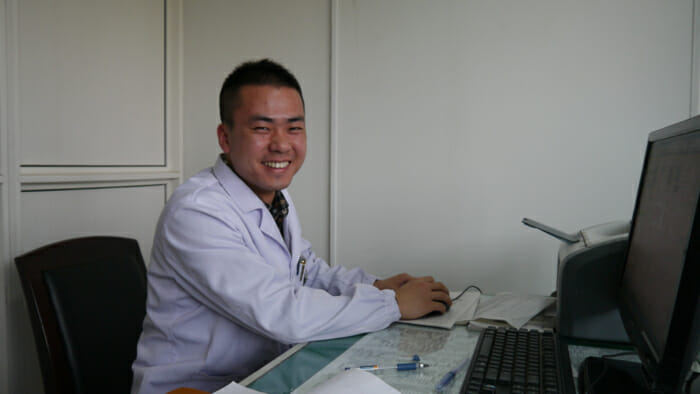 Checking into the Acupuncture clinic in the hospital. I can't tell you which one because all my receipts are in Chinese.

The acupuncture department was very small. We first met an administrative person who took the paperwork from registration. While he was completing information on the computer a doctor came over to check my arm. My hand was swollen and I had little movement. He didn't want to do anything until he confirmed that it was not broken. I received a requisition for an X-ray. About 20 minutes later I returned with the X-ray that confirmed that there wasn't a break. 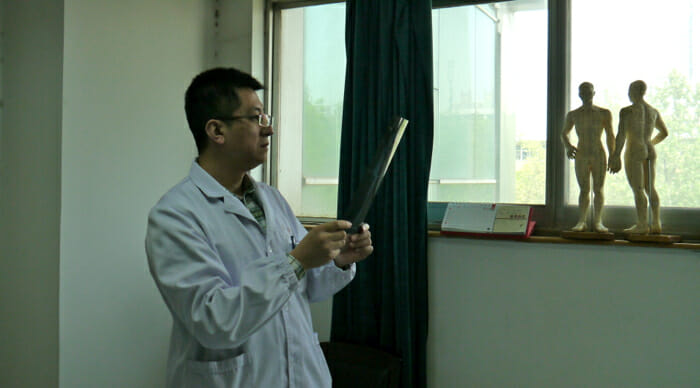 The X-ray showed no break in my arm.

I have had acupuncture treatments in Toronto for a variety of ailments – from tennis elbow to an injured knee that prohibited me from raising my foot more than a few inches off the ground. It has always been a very successful form of treatment for me however, I knew going into the Chinese hospital that the treatment would be more of a challenge than at home. Westerners are not accustomed to acupuncture so therapists in the west go lightly on us. I expected a more intense experience from a Chinese doctor. 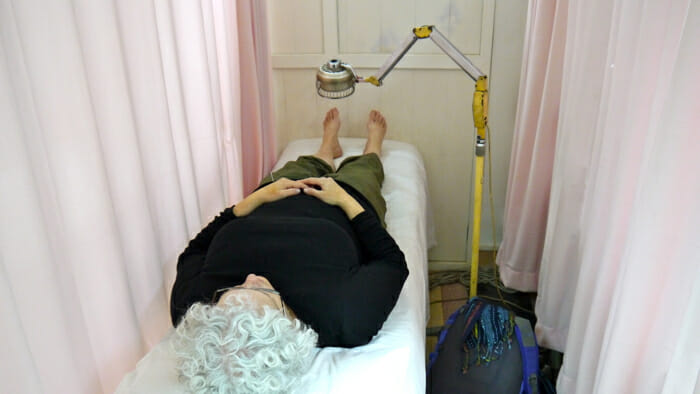 Five well-placed needles was all it took.

As it turned out, the doctor decided to use only five needles. One was placed just above my ankle on the inside of my right leg and another in the same place on my left leg. Then, one was placed on the outside of my right calf just below the knee – this one hurt. The pain was not from the needle but from the chi or electricity or whatever blockage it was breaking up. Finally, two needles were placed on my left arm – one in the soft tissue between my index finger and my thumb and the other about five inches up from the bone bump on the outside of my arm.

I was left to let the needles to do their work for about 15 minutes. Then the doctor returned and turned each of them intensifying the experience. 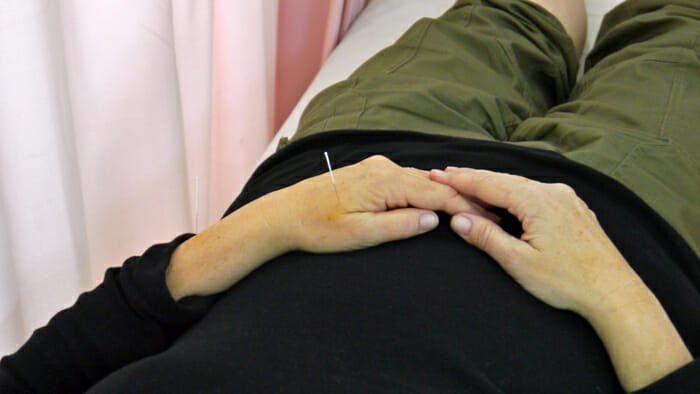 Two needles in my arm and three in my legs.

And that was it. I got up and went back to the hotel.

The whole experience, transportation to and from, registration, X-rays and treatment took two hours.

Acupuncture does not work immediately. It takes a bit of time but, by the end of the day, I had some mobility in my hand. By the following morning, the swelling was gone. Within four days, I had almost full mobility. There is no way that this healing would have happened without the treatment I received.

I'm home now and I have booked a appointment with my acupuncture therapist. The damage I did was serious. The Chinese doctor had wanted me to return for further treatments but, knowing that I had support available at home, I really wanted to get on with the trip.

I was incredibly impressed with this Chinese hospital, the care I was given and the efficiency of the system. I also have to give a big shout-out to our tour guide and my medical translator, Alex. I am told by others on the trip that all Overseas Adventure Travel trip leaders are of the same caliber but that's hard to believe. Alex truly is a star.