You are here: Home / Solo Travel Destinations / North America / United States / How to Chautauqua: Your Guide to a Summer of Learning and Fun 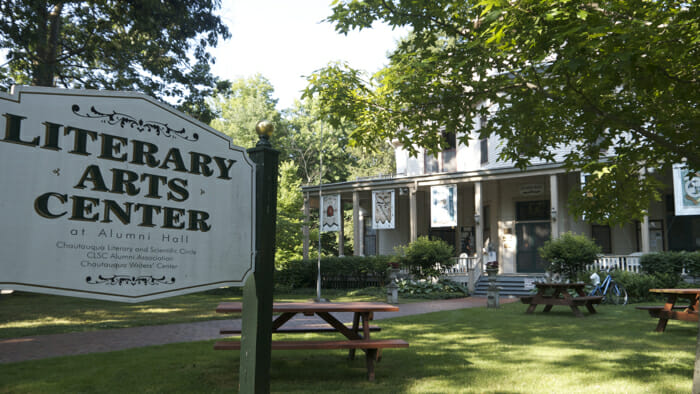 For the many who have gone to Chautauqua for years (4 years for some, four generations for others) it is an annual pilgrimage to a 19th century lifestyle and 21st century thinking. It's a “Pleasantville” that challenges your mind.

It is a place where bicycles are not locked, children are free to spend time unsupervised by parents, people greet each other in the street, and strangers share significant conversations. The pace and values seem out of the past. However, the programming is current. Every day at Chautauqua offers an opportunity to learn, grow, and expand one's understanding of the world.

It's also a great destination for those who travel solo. In such an environment you can be as social (or not) as you wish. 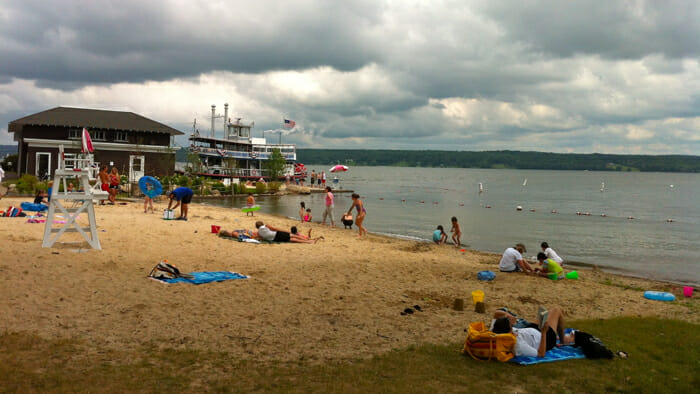 The beach at Chautauqua Lake.

Located in western New York, the small town of Chautauqua has been home to summer programs since 1874. In talking with locals I learned that this learning community has seen some troubled times over the years. But it has clearly weathered the storms. A visit to Chautauqua offers: 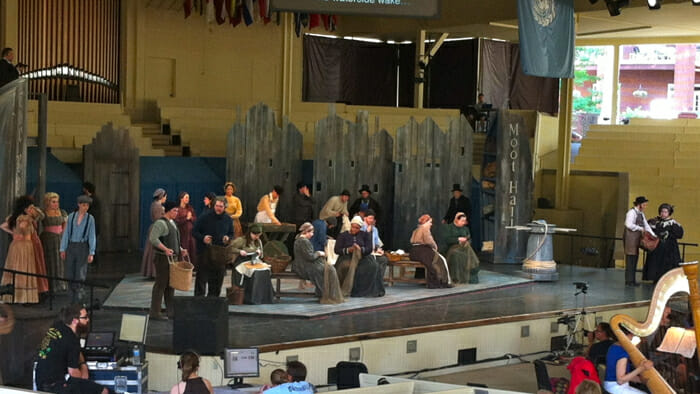 The Chautauqua Opera Company in dress rehearsal for a performance of Peter Grimes.

How to Chautauqua: A Typical Day

I started most days at Chautauqua by going to the market that was just a few blocks away from my apartment. From there, I would go for a coffee at the unmarked Starbucks on the southwest corner of Bestor Plaza. Starbucks is the only food service chain that I have seen in Chautauqua and while they serve using Starbucks cups, there is no Starbucks sign on the gazebo they serve from.

Each morning I enjoyed my coffee while reading the Chautauqua Daily newspaper which is sold by young kids dressed in early 20th century attire hawking their wares with a classic sales call I've only seen in the movies. On the back page of the Daily are all the major events and lectures of that day and the next. I would circle what I wanted to attend.

From there the day would start in earnest. I would…

The days at Chautauqua are full and satisfying. It is an opportunity to take pause and think about things that would not normally cross my path.

When to Go to Chautauqua

Chautauqua Institution runs for nine weeks in the summer. There is a different theme each week. Have a look at the program and morning lecture speakers for each day of the week to decide which week best meets your interests.

Getting there from Canada I crossed the Peace Bridge at Niagara Falls.

How to Get to Chautauqua

This is a small town just south of Lake Erie. Driving is definitely the easiest way to get there. If you have to fly, a flight to Buffalo makes sense as Chautauqua is only 70 miles away. From there, you can rent a car or take a bus that runs between Buffalo and Chautauqua. 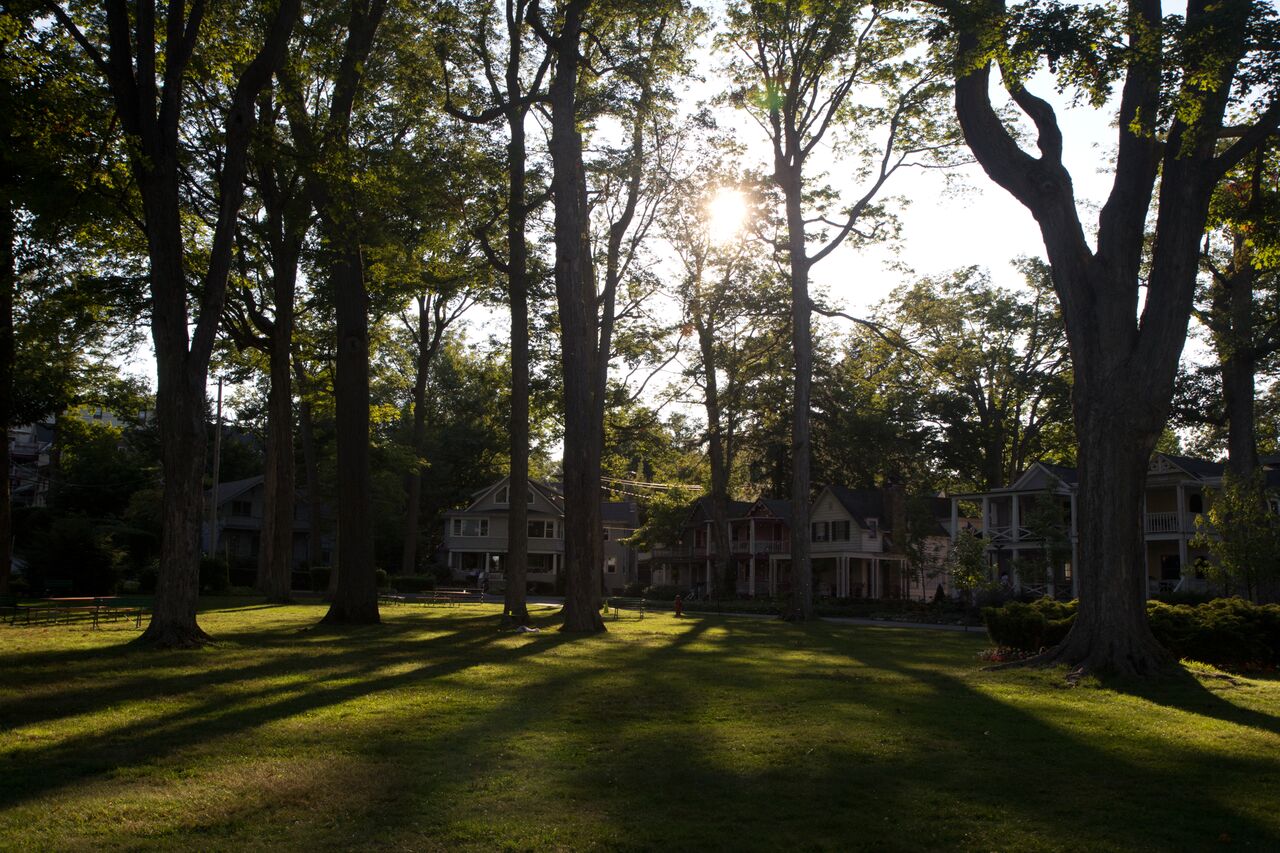 Where to Stay in Chautauqua

From apartment rentals to hotels on the grounds to cottages and inns off-site, there are many options for accommodation at Chautauqua. However, there is an advantage to staying in Chautauqua. It lets you live the Chautauqua experience more fully with more leisure time, easier meal options, and a chance to get to know neighbors. There are a number of choices:

How the Tickets Work at Chautauqua

Anyone staying on the grounds of the Chautauqua Institution must purchase a gate pass valid for the entire length of their stay. It gets you into the morning lectures and many other events. There are a variety of gate pass options from tickets for a portion of a day to a week to the entire season.

There are some events such as the theater, the opera, and the extensive program of special study courses that require more than a gate pass.

The Amphitheater is used during the day for lectures and in the evening for entertainment.

Plan Your Days and Week at Chautauqua

If you want to take a special study course, have a look at their calendar and sign up before you arrive.

Start by going to the Visitor Center where there is an entire wall of brochures covering what's going on. Get the weekly calendar to get an overview of the week's program. Pick up the Chautauqua Daily newspaper to get more in-depth information on what went on the day before and what's coming up that day. On your first visit, take a tour of the town.

On Sundays, many of the people who are running programs for the coming week have information tables to let you know what their program is about. From serious Scrabble to golf to spiritual studies, it's all there. Most have a cost. You can consider any of these to add to your days that week.

I found that the core of my plan stayed the same every day but the rest of the day could change based on what I read in the paper that day.

Go to Chautauqua and you'll be among friends from all over North America. When I was there the Chautauqua parking lot revealed that people come by car from Florida, New York, Ohio, Kentucky, Connecticut, California, Maryland, West Virginia, North Carolina, Georgia, Nebraska, Tennessee, Ontario of course, and many other places.