You are here: Home / Solo Travel Destinations / Asia / Indonesia / The Frenzy of Jakarta to the Calm of Bogor’s Botanical Gardens, in Photos 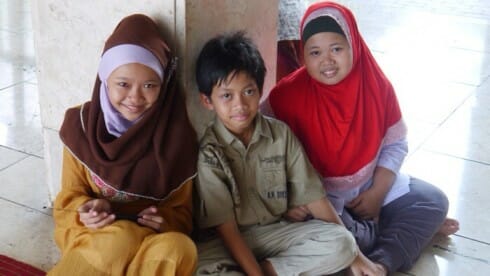 Children at the Istiqlal Mosque – Indonesia's largest mosque and the third largest in the world.

Having only spent two days here I can't claim to know the city well but I can say that it shows its population of over 10 million in the traffic, frenzy of people everywhere and the pollution. I am not fond of any of these things. However, there is also beauty in this city. Despite the number of tourists and expats this city attracts I was received with welcoming smiles from the locals everywhere I went. 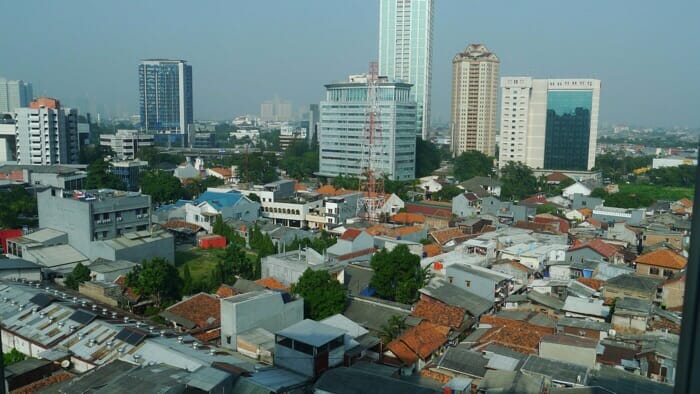 This is the view of Jakarta from my hotel window. In the foreground is middle class housing in the city. The streets are only wide enough for scooters and foot traffic. In the distance are a few highrises representing the very modern and affluent part of the city. These are modest compared to those in the city center. 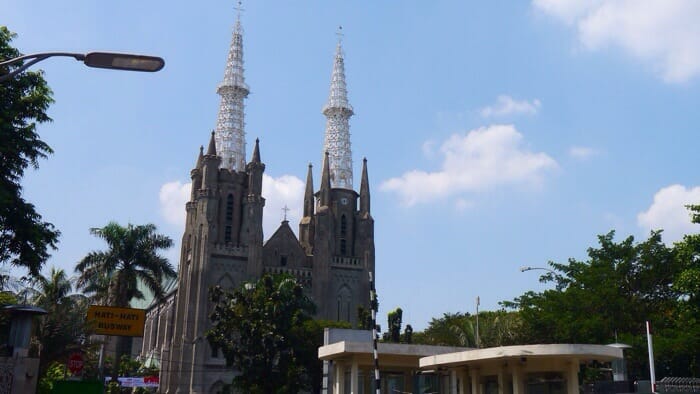 The Jakarta Cathedral is located across the street from the Istiqlal Mosque (Istiqlal means freedom or independence). The cathedral was built in the early 20th century. The mosque was opened to the public in 1978. It was built in what was Wilhelmina Park across from the cathedral as a demonstration of religious harmony and tolerance and in commemoration of the country's independence.

It is also a diverse country with many religious groups represented. Below you'll see photos of the Istiqlal Mosque – the third largest in the world. Across the street from it is the Catholic Jakarta Cathedral. During high holidays each uses the parking lots of the other to accommodate those attending.

While visiting Jakarta is a must, I confess that I was happy to be moving on with the knowledge that calmer times lay ahead. The next stop on my tour as a guest of Overseas Adventure Travel was the botanical gardens in Bogor which was made en route to our second major stop, Bandung.

Suffice to say, I'm a bit overwhelmed and haven't yet processed enough about my trip here to write about my experience well. However, I have pictures.

I hope you enjoy this overview in photos of my first two days in Indonesia.

Jakarta and Bogor – Some Select Photos 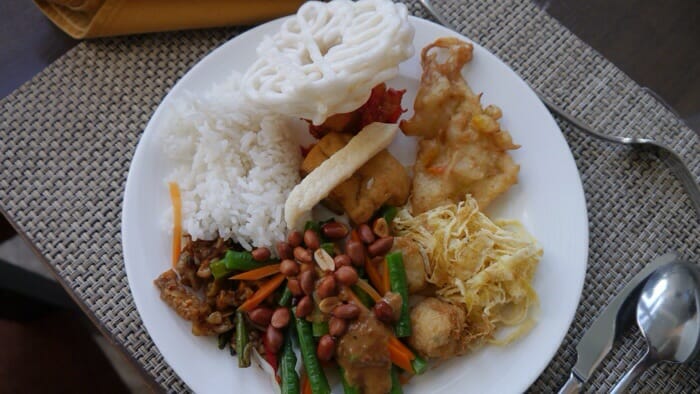 My first breakfast in Indonesia. The food is essentially the same at all three meals. 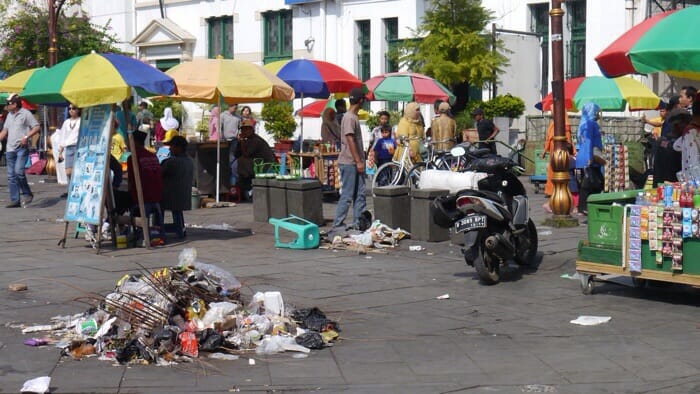 Fatahilah square is in the center of old Jakarta. Abandoned buildings nearby house squatters. Enterprising vendors in the street offer everything from palm reading to Espotong (cut ice – like a popsicle made of coconut milk and, in my case, avocado) to handicrafts. 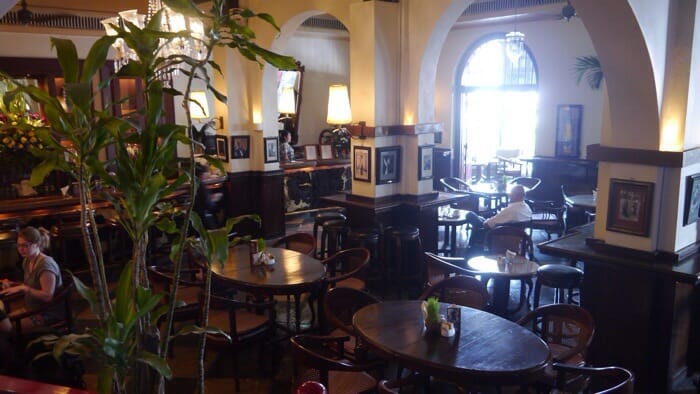 Located on Fatahilah, in contrast to the square, is the luxurious Batavia Cafe. 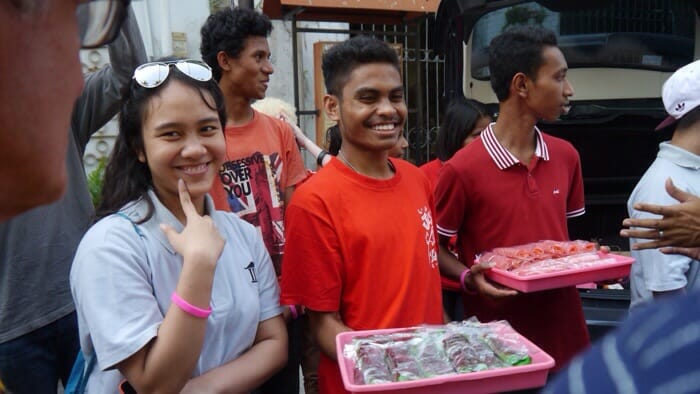 These students were selling pancakes rolled with chocolate, banana, and other sweets to raise funds for an orphanage in West Java as part of a school project. 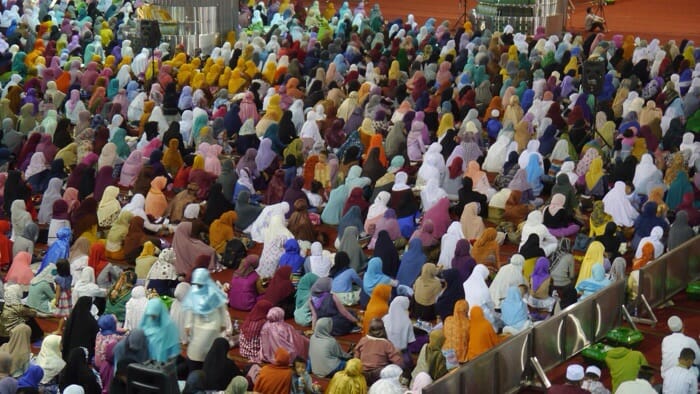 On the women's side of the Istiqlal Mosque they were listening to a guest speaker. 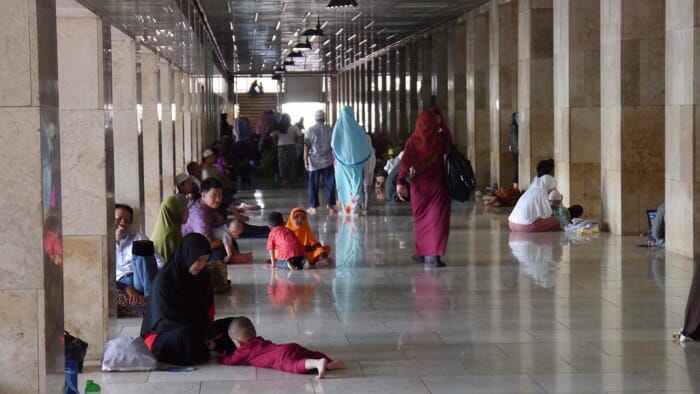 Families relaxing in the cool of the Mosque. The temperatures were ranging in the mid to high 90s with high humidity. 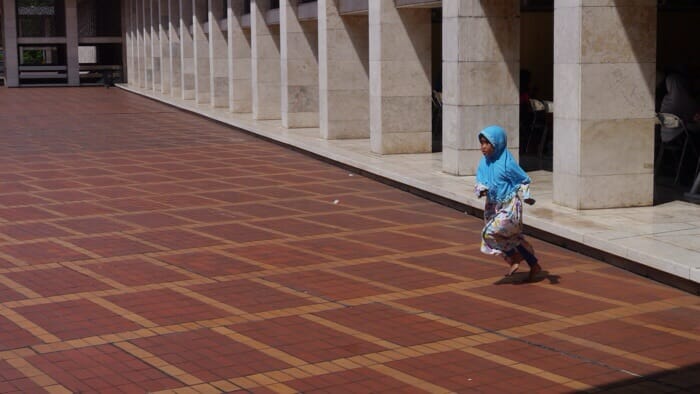 This one little girl was enjoying herself just running in the large empty space – a rarity in Jakarta. 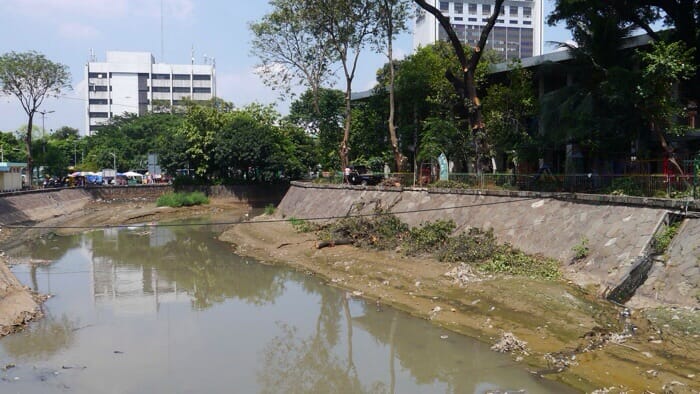 There are canals throughout Jakarta, all of which are heavily polluted. 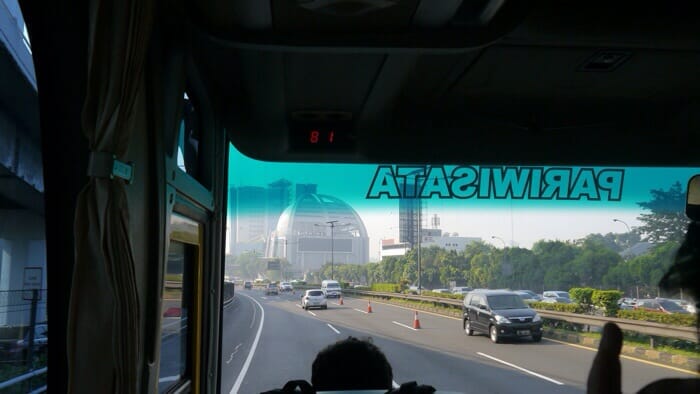 This is on our way out of the city. This photo defies the crazy traffic here except for one detail. You can see that one lane of the highway has been taken over for traffic going in the opposite direction. If you could see over the barrier you would know why it is so important. Our guides never promise any specific time of arrival because traffic could change at any moment. There are people who earn money by stopping and directing traffic and then taking money from the cars that they let through. 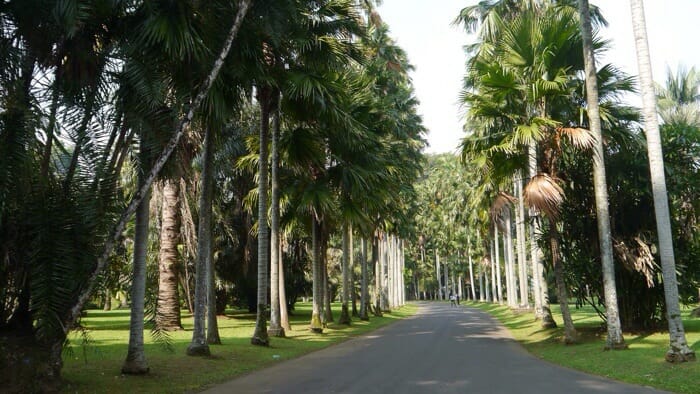 The botanical gardens in Bogor are 60 km south of Jakarta and, with over 80 hectares of plants, a great relief from the city. 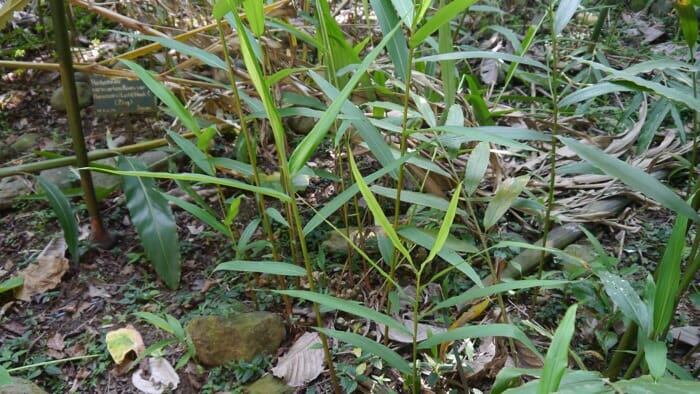 This is ginger and the specific variety from which we get ginger root. The above ground plant certainly defies its hefty roots. 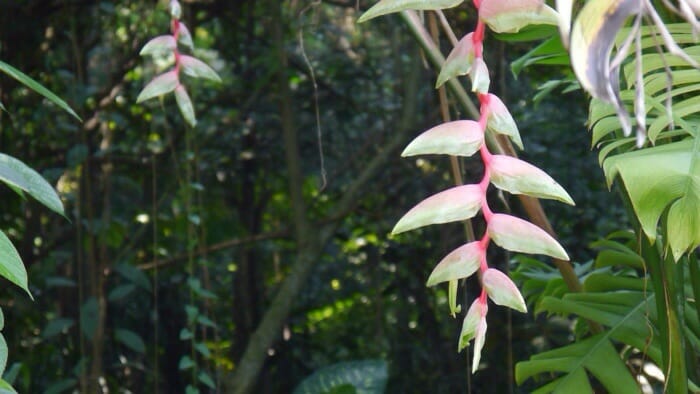 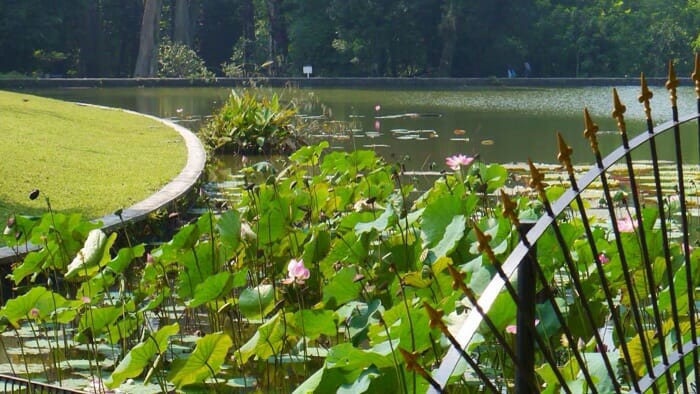 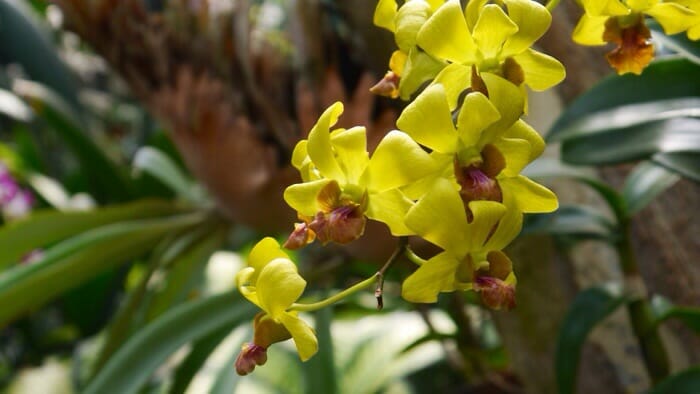 There is an orchid house that contains over 3,000 varieties. 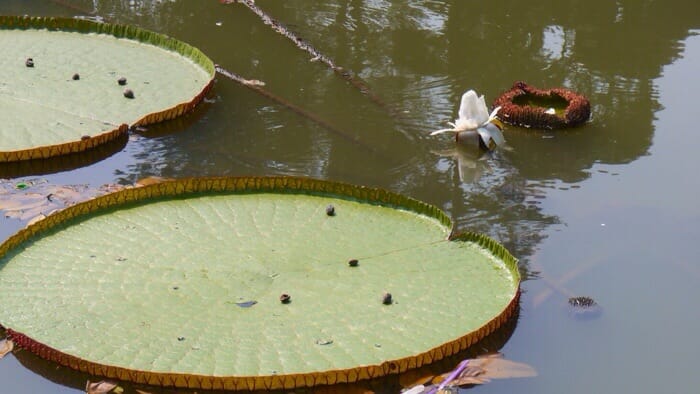 We were told that this lily pad can support a small baby. 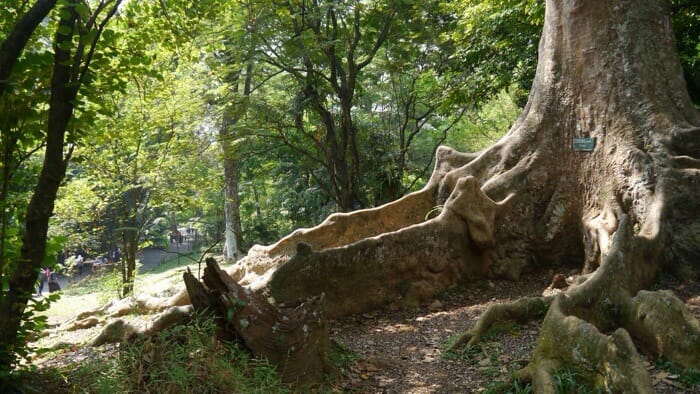 The root system of the massive King tree. 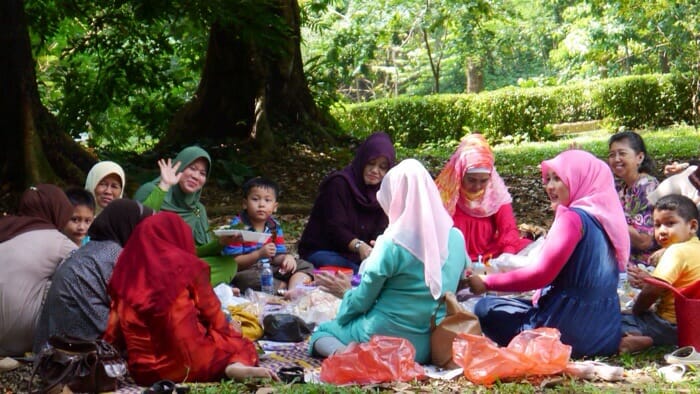 And, of course, women and children enjoy a picnic in the gardens. 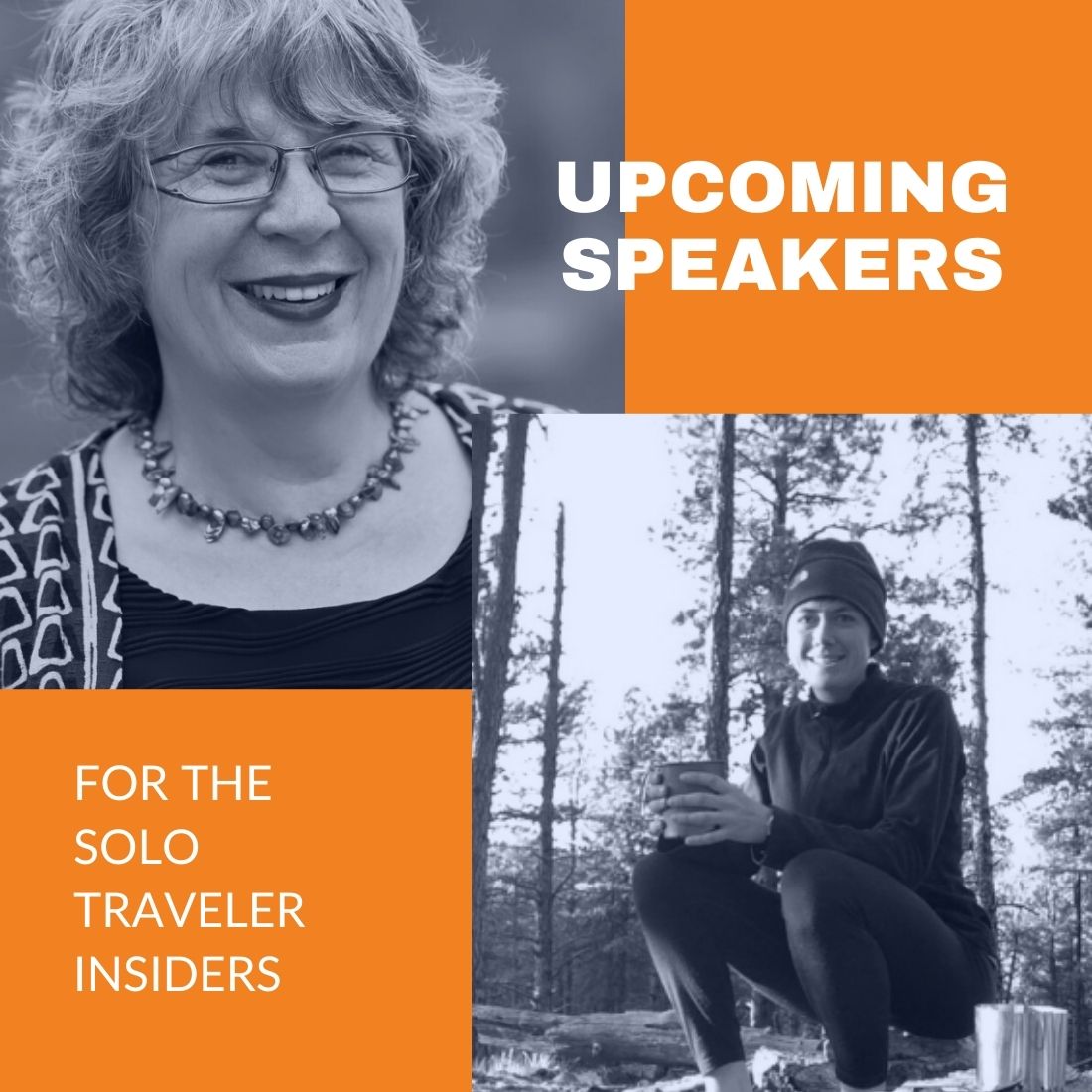