You are here: Home / How to Travel Alone / A Solo Point of View / Learn a New Language the Easy Way for Richer Travel Experiences 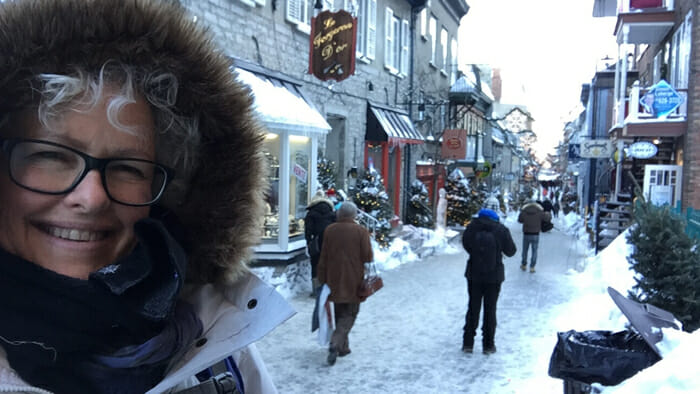 The winter wonderland of Lower Town in Quebec City. It's a French-speaking city in North America. A great destination for those wanting to practice their French.

Traveling to a country where you don't speak the language is a challenge. I've done so many times and consequently fumbled with mime gestures and sound effects to be understood.

Travel is so much easier when you learn at least a few basic phrases and some vocabulary of your destination. Doing so also shows your respect for the country, can deliver a deeper understanding of a culture, and result in richer, off-beaten-path experiences.

But learning a new language can be difficult. Time is often a factor. Perhaps having been unsuccessful at learning a language in the past is a barrier. And then, of course, there's the concern of saying something stupid.

Long-time readers know that in 2017 I made it my mission to become fluent in French. Well, I didn't quite make it. But I'm still trying and now I'm using Babbel.com because it works.

A study that focused on learning Spanish showed that 15 minutes a day for two months covers the requirements for one college semester of Spanish. That shows the benefits of frequent, short lessons which I'll discuss further below. See the video at the end of this post for more details on how Babbel works.

I've gone to language schools in the past for an immersion experience. It was helpful but I was only able to take a week at a time so I was never really able to retain much information. Learning on a daily basis with Babbel has actually been more effective.

I've also used various online resources but Babbel.com is the first language program I've used that has allowed me to chose the type of French I want to speak. At the beginning of the program, even before choosing the level I wanted to start at, I indicated whether I was learning French for work, travel or personal interest. I chose travel and, as one would expect, the lessons were all relevant to travel.

Next I chose my level. I went with intermediate given all the effort I'm made in the past. However, I didn't bypass the two refresher courses that each include 20 lessons each. As a result, I learned a lot of new vocabulary specific to travel. Une chambre simple (a single room) was one phrase which is certainly helpful for this solo traveler. The grammar and sentence structure review was helpful as well.

Once past the two refresher courses, I was on to the Intermediate In-depth Course 1 and its 18 lessons. Again, it was all about travel. In lesson one I learned vocabulary about travel arrangements and holiday activities.

In my experience each lesson takes about 15 minutes to complete. They're bite sized. Which is perfect. Short lessons are better for learning and retaining new information. Since you can also download lessons and learn offline you can learn on the go.

Why Learn a New Language with Babbel

Learning a language is not something that can be done in a one sitting. It's a matter of studying regularly for short periods of time.  Fifteen to twenty minutes a day is perfect. Do that for three weeks and you'll definitely have some language skills ready for a trip.

With every lesson every day I expanded my vocabulary.

Where I'm Going Next to Use My French

My first trip of 2019 is to Montreal, Quebec. Quebec is a bit of France dropped into the middle of North America. If you can't go to Europe, plan a trip to Montreal, Quebec City, Mont Tremblant or many other great Quebecois destinations. I've been before and it's always better once I've warmed up my French and I'm speaking better.

A small anecdote: Being able to speak the local language isn't the only time that a second language is helpful. In a hostel in London a few years ago, I became the translator between a fellow who spoke Spanish and French and a woman who spoke only English and German. As the sole French speaker in the room, as limited as my French was at the time, I was the person who could bring our little group together. It felt great!

A Discount for You from Babbel

Get a 25% discount to Babbel here.

This post was written in partnership with Babbel.com. As always, the stories and opinions are my own.