It's a story of following dreams, of family and community, of history and entrepreneurship.

I've told the story of Distillerie Fils du Roy to a number of friends.

I've told it to strangers too.

And every person I tell gets as excited as I am. And they want to go. They want to meet this man who I have described as the most passionate person I've ever met.

It was on a road trip along the Acadian coast of New Brunswick heading north to Caraquet for Acadian Days (I will tell you about that experience soon.) that I stopped into Distillery Fils du Roy and met its owner, Sébastien Roy. 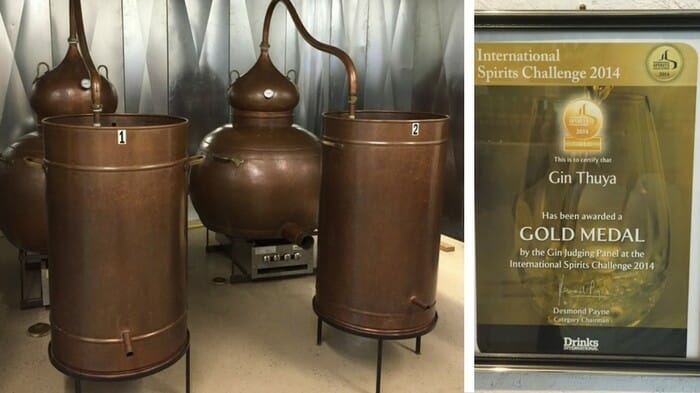 This is Sebastien's still. On the right is the Gold Medal won for his Gin Thuya at the International Spirits Challenge in 2014. He went with the hopes that his absinthe would win gold. It won a bronze and his gin entry, which had been a mere afterthought, won gold.

On my road trip in New Brunswick I discovered this distillery way up north in this tiny village and Sébastien, the guy that owns it.

He makes amazing gin and vodka. The flavours are surprising and distinct. And he's now producing single malt whiskey. But of course that takes three years at minimum before it can be put on sale so to finance the production he produces beer that sells out really quickly at a premium price.

Sébastien is Acadian and with every beer he tells a story that relates to the Acadians who were largely deported from British North American in 1755. There's one beer, Messe Blanche, that honors a man who acted as a priest in Caraquet when they had no priest – and it's made with holy water! There's a beer called 1755 which is a tribute to an Acadian band of the same name and their 40th anniversary. (See a video of them playing at the end.) And there will soon be two beers, one called Evangeline and the other Gabriel, the characters from Longfellow's poem, Evangeline. The story tells of the deportation and the separation of the two lovers. One beer will feature Evangeline on the label and the other Gabriel. When the two bottles sit side by side the lovers will hold hands once again.

And then there's his single malt whisky that will come of age in 2019. It has been made specifically for the World Acadian Congress. What Sébastien is doing for this is numbering every bottle starting with 1604, the year the Acadians came to North America and ending in 2019 for the year of the Congress. But listen, the bottle numbered 1755, the year that the British kicked the Acadians out of New Brunswick, Nova Scotia and Prince Edward Island, he is going to give as a gift to the Governor General of Canada and perhaps a mention that the Acadians never received an apology from the Queen.

Yes, Sébastien's is a story of following dreams.

So that's the story I tell my friends. Here now is a proper account of Sébastien and his distillery…

From Bread to Beer to Absinthe

Sébastien's fascination for the chemistry of beer and spirits-making goes back to his youth. Watching the effect of yeast on dough as his mother made bread sent him to encyclopedias to understand the chemistry behind it. Eventually that led to beer making in university and a beer club he formed with two friends. They would meet, bring one beer each and discuss the beers from many angles.

Later he set out on a beer-tasting trip through northern Europe. However, he eventually tired of beer. His palette was fatigued. He wanted something different and his friend suggested they go to Prague. This is where he tasted absinthe and his journey into distilling began. 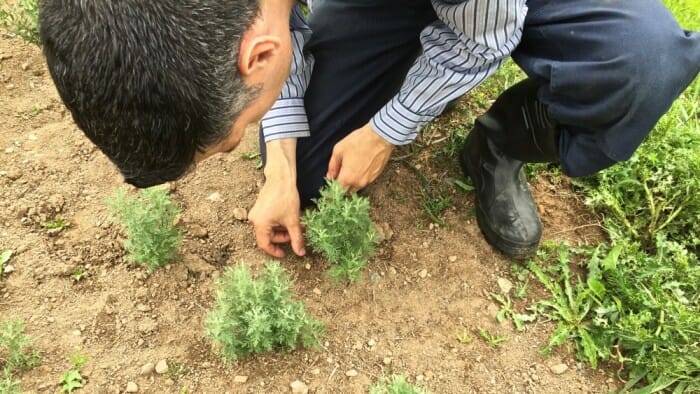 Sébastien grows many of the plants required for his spirits.

Financing a Distillery with Beer and a Lot of Creativity

In 2012, in his home village of Petit Paquetville, New Brunswick, Sébastien decided it was time to build his own distillery. It's actually a family affair with his mother, father and siblings involved. Sébastien showed me the original part of the building and then how it had grown twice since then – twice in four years! And he showed me the bottling system that was added last year. He described it as a Christmas present to his family who would no longer have to bottle everything by hand.

And then he showed me the beer.

Some of the beer he produces is the basis for his single malt whiskey. But his other beers are creative ways to finance the business. A whisky must be aged for a minimum of three years which means the investment is all up front. To keep the cash flowing Sébastien makes limited edition beers that sell very quickly. They're almost collector's items. Should you receive one for a gift, I was told, you know the person really wants to impress.

So what are these beers? Each and every beer honors a piece of Acadian history and culture. They have their stories. Here are a few.

Beer is not the only source of ongoing sales and cash flow. Sébastien also produces what he calls L'eau D'Aout (Water of August). This is a very young whiskey that actually cannot yet be properly called a whiskey. Young though it is, it's still smooth and delicious. And it comes available only on the 1st of August, the beginning of Festival Acadien de Caraquet. The lineup to buy L'eau D'Aout starts early in the day. 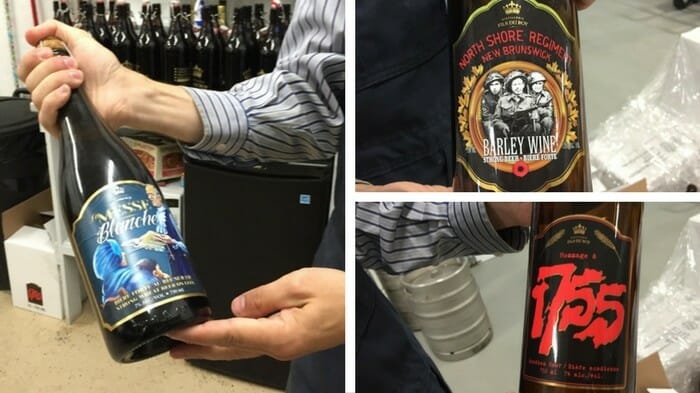 Beer is the financial base 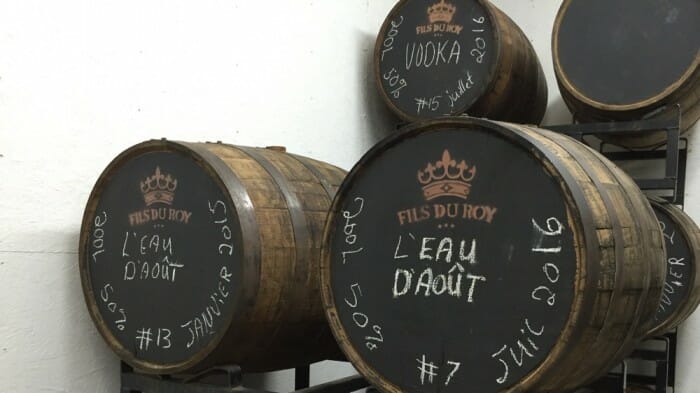 In it for the Absinthe. Awards for the Gin.

While Sébastien may have started with his dream of producing absinthe he was a practical man. He knew that they needed to broaden their product line. His first effort was gin and while he produced it with great care it was his absinthe that he wanted to be known for.

In 2014 he packaged up his absinthe to send to the World Spirits Competition in San Francisco. At the post office he was told he could send three bottles for almost the same price so he repackaged and included his gin. The results surprised him. His Gin Thuya won double gold while his absinthe won a bronze. He thought it was a mistake so he sent them off to a London competition and got similar results. Soon he was known for his gin. 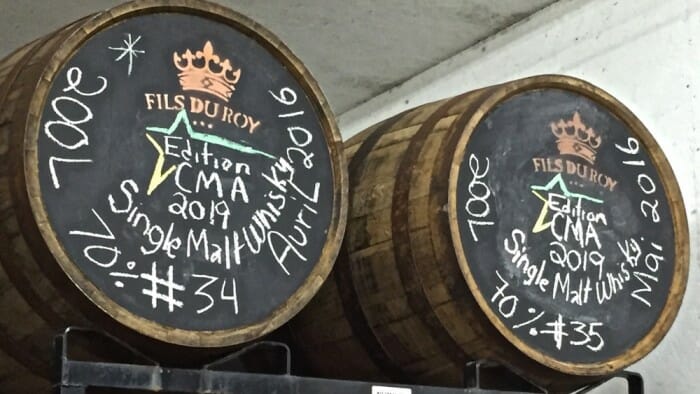 These barrels hold the single malt whiskey that will be ready for the 2019 World Acadian Congress.

Sébastien continues to expand his line of spirits with immense creativity. In addition to his beers, absinthe and gin he also produces vodka, rum and whiskey.

In 2019 a very special batch of whiskey will be ready for the World Acadian Congress which will be held in New Brunswick and PEI. He will number each bottle starting at 1604, the year the Acadians established themselves in North America, to 2019, the year of the Congress.  The bottle numbered 1755, the year of the expulsion of the Acadians, will be given as a gift to the Governor General of Canada with a reminder that the Acadian people have never received an apology from the Queen for their deportation.

Sébastien's passion for his work, his community and the history of the Acadian people is boundless. How he weaves the Acadian life, culture and history with his extraordinary artisanal approach to the making of beer and spirits is truly inspirational. His enthusiasm for life is contagious.

Distillerie Fils du Roy receives visitors Monday to Saturday from 10am to 5pm. You can have a tour of the distillery, likely meet Sébastien as I did, enjoy a tasting and purchase one or a number of their fabulous products.

This week-long road trip was supported by Tourism New Brunswick. It was fantastic! I have so much to tell you. As always the opinions and experiences are my own.

And now for a little Acadian music. Here is the band 1755.