You are here: Home / Solo travel stories / My Magical Mystery Tour – it’s not what you think. 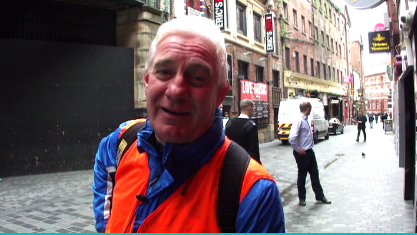 Meet Paul, a most hospitable Liverpudlian.

“Hi ya. Havin' a good day?” — That's how I was greeted everywhere in Liverpool.

“Ach, without doubt, it's the people.” — That was my taxi driver's answer when I asked him “what's the best thing is about Liverpool?”.

It took just one day to learn that the Liverpudlians mean it when they ask if you're having a good day, and to understand that, in this city that offers tons to do, it really is the people that make it amazing.

If I was traveling with a companion, I may not have had a chance to experience just how incredible the people of Liverpool are. But, because I travel solo, I meet people more readily. And, because I'm on my own, they are keen to chat and sometimes go above and beyond to make sure I have a good time. (Please stick around to the surprise ending to this post. No don't jump ahead. Allow this to unfold as it did for me yesterday.)

Solo Traveler in Liverpool is Not So Solo

My first friendly encounter was Paul. I had just come out of the Cavern Club (the famous club where the Beatles played) and I kindly let him know that there was no music until later in the day. How embarrassing. Paul is a local and a card-carrying member of the club. He needed no information from me. In fact. here's what he has to share with you…

After leaving Paul, I walked up towards Liverpool One, a shopping district. On the way I stopped for a coffee and met Brian. Brian is 87 and was waiting for his wife who was shopping for a red dress in the store across the way. With a twinkle in his eye, he indicated by drawing a line across his thigh how short and sexy he wanted that dress to be. Clearly Brian loved to chat. He shared his knowledge of the history of Liverpool and his experiences during the war.

After Brian, I continued along and went to a couple of museums. I didn't have time to actually tour the Tate Gallery but I stopped in to learn what it was about. This time I met Tifany from Canada. She worked at the ticket counter and all I had to do was ask why the Tate was in Liverpool and the information started flowing.  Tifany's knowledge and enthusiasm matched the two born and bred Liverpudlians. She focused on the amazing art scene in this city and provided stories about the energy and amazing people here. 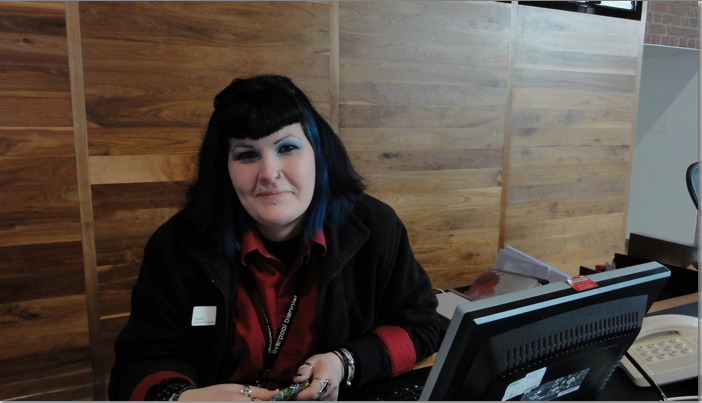 Tifany at the Tate.

Finally it was time to go back to the Cavern to take in some music as Paul suggested. I got there just after 3:30 and was looking around for the best seat when I heard my name called. I turned around and it was Paul. But I knew that he was working the afternoon shift! Well, he took a couple of hours off work to show me the Cavern properly.

I couldn't believe it. It was amazing. We had such fun as he had held the best seats in the house for us. We watched the show from stage right – really, only a few feet from the musician. We chatted and he told me of some of his life's highlights – often it was about showing people from away around the music scene in Liverpool. The luck! It was incredible! When we left the bar he walked me back to my hotel pointing out historical landmarks along the way.

Friendly. Knowledgeable. Proud of Liverpool and eager to share it's wonders. It is the people that make this city fabulous.

A very special thanks to Paul. You absolutely made my day. In fact, you made my trip! I can't imagine a day matching this one. 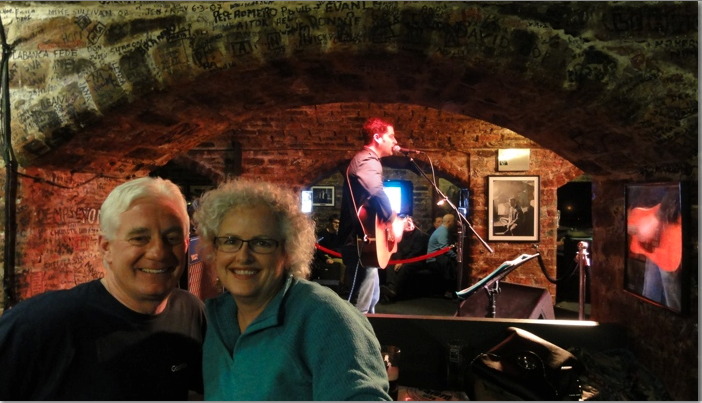 That's Paul and me. He got the choice seats for us, right beside the stage.