You are here: Home / Solo travel stories / More Fun with a Paper Bag I’ve Never Had 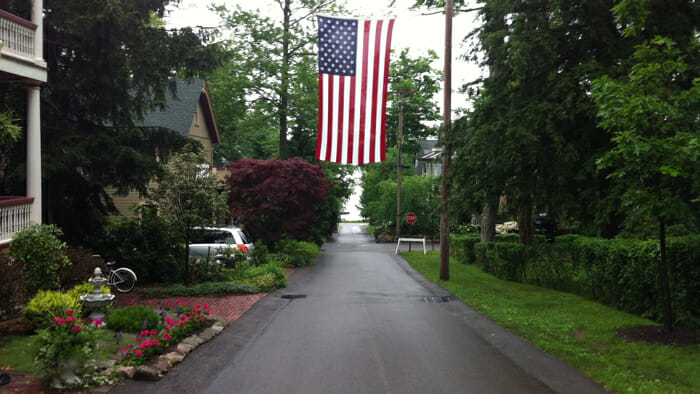 It was a wet 4th of July morning but spirits were not dampened in the least.

It was my first time ever spending the 4th of July in the United States.

As a a Canadian, modest as most of us are about patriotism, I didn’t really know what to expect in this land that takes patriotism seriously. Actually, I expected it to be taken up a few notches.

And it was – kinda. Some people wore red, white and blue. Some kids had hats. Bunting and flags were everywhere. But mostly…

… what I found was people simply having a lot of fun!

A Fantastic Fourth of July

I was in Chautauqua, New York, home of the famous Chautauqua Institution which has offered nine weeks of lectures, classes, culture and sports every summer since 1874. Whether your thing is education, spiritual growth, cooking, golf, sailing, shuffleboard… or simply hanging out at the beach, you’ll likely find it there. It’s like a college but classes are optional and there are no essays or exams to write.

I started the day with my usual morning coffee and reading of the Chautauqua Daily. The paper does a great job of summarizing the previous day’s events and inspiring you to attend some of the current day’s highlights. And it worked. All day long I went from one thing to the next and had a great time. 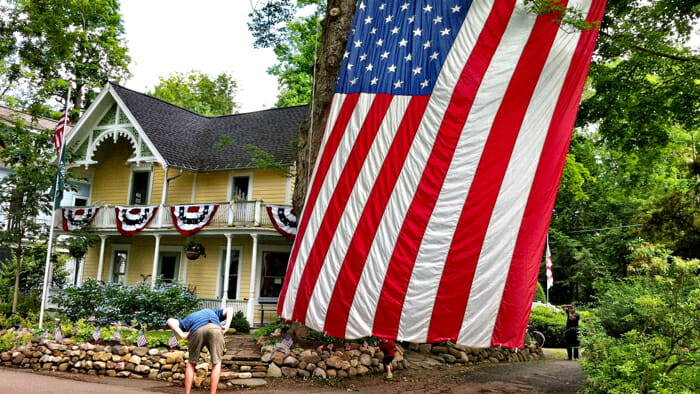 Boy and father playing under a massive American flag

A sermon on love, hell and rewriting narratives.

Each week of the summer they have a different pastor leading the morning Devotional hour in the Amphitheater. While I was there it was Rev. Otis Moss III of the United Church of Christ out of Chicago, Illinois. I attended all his sermons and each day marveled at his ability to weave stories and communicate a message of love, acceptance, tolerance and empowerment.  On the Fourth of July he encouraged us to rewrite our personal narratives as well as that of the country.

An analysis of the American socio-political landscape

The next event was a lecture by Chris Hayes, host of All In with Chris Hayes on the American cable channel MSNBC. His analysis of the American socio-political landscape was fascinating. He started by dividing people into two camps – insurrectionists and institutionalists. While he says that his inclination is towards the former, he sees the necessity of the latter. The problem is that people are no longer trusting American institutions. He spoke about trust, the problem of social distance and impossibility of a meritocracy. He was entertaining and insightful. You can watch this presentation from the Chautauqua channel here.


The importance of Theist and Atheist communication

Next up was a presentation by Chris Stedman, Assistant Humanist Chaplain at Harvard University, in the Hall of Philosophy. A former born-again Christian, he came out of the closet twice – once as gay and a second time as an atheist. His speech was called Finding a Common Humanity: building bridges between atheists and believers. His argument was that interfaith communication, which is accepted by many as a fundamental necessity for a peaceful society, must be stretched beyond the faithful to atheists as well. It was a wonderful addition to the week’s program.

From the Hall of Philosophy I went to the Chautauqua Theater to see Cat on a Hot Tin Roof. America has produced some amazing playwrights but none with such a definitive southern voice as Tennessee Williams. From Streetcar Named Desire to the Glass Menagerie to “Cat” he has explored our universal human frailties and foibles with the south as his backdrop. The Chautauqua Theater Company’s production was rich in superb performances backed by a versatile set and creative lighting and sound that collectively brought out the heat of the play. Memories of Elizabeth Taylor and Paul Newman playing the lead roles of Maggie and Brick disappeared with the opening scene. It was theater at its best. 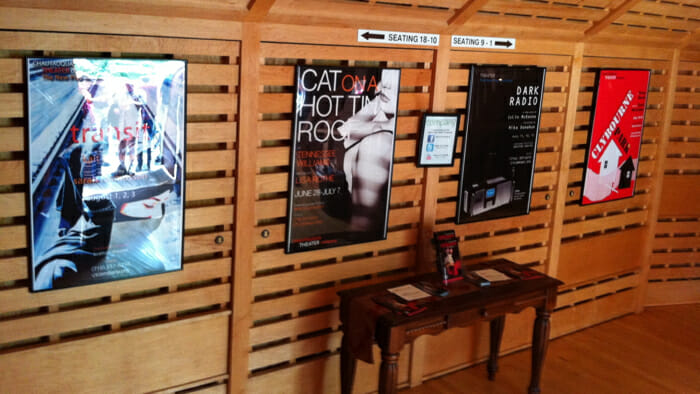 Cat on a Hot Tin Roof was playing at the Chautauqua Theater.

The Pops and Paper Bags

I barely had time for a bite of supper before I had to head back to the Amphitheater where the Chautauqua Symphony Orchestra was putting on a Pops concert. The guest conductor, Stuart Chafetz, was incredibly entertaining. Guest artist, Tony DeSare, gave us a short parade of tunes made for crooners. The concert to that point would have been enough but, in fact, it was simply the build-up to a great crescendo with Chafetz’s signature piece, Tchaikovsky’s “1812 Overture”.

When each of the 5,000+ of us arrived for the concert we were given a program with four paper bags inside. With these bags, the audience would become part of the percussion section of the orchestra. We were to be the cannons of the “1812 Overture”.

Before starting the piece, Chafetz divided the audience into four sections. He rehearsed us – but not with our paper bags. We had to get some basics down before we were allowed our instruments. We had to clap when he pointed to us.

Truly, I was so looking forward to popping my paper bag that I wasn’t listening to the piece. I was watching the baton waiting for the cue. Finally, Chafetz pointed his baton straight into the air. This told us to blow up our bags. Then, when the time was right, he twirled around and pointed at section one. Then two. Then three and four. Each section popped their bags on cue and then quickly blew up the next in anticipation of the next round. 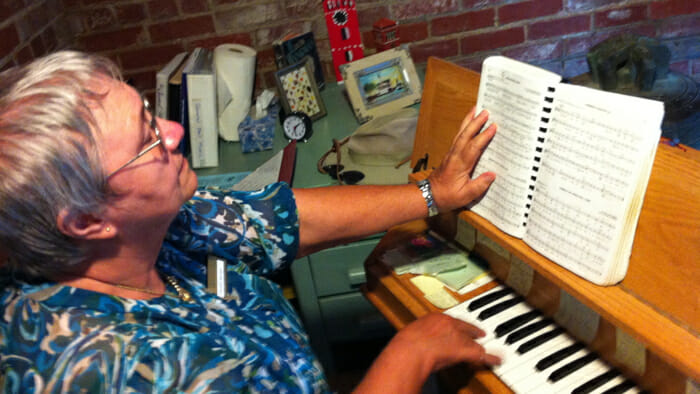 Carol Bennett has played the bells in the Bell Tower for twelve years at Chautauqua.

And, of course, fireworks.

Of course, the orchestra did an encore but when we finally spilled out of the Amphitheater many people wandered down to the beach to see the fireworks set off by the towns around Lake Chautauqua. But again, there was more than I expected. There was not just fireworks to be seen from a number of communities but also red flares along the shore line. And this wasn’t just in front of Chautauqua but all around this large lake. Individuals with cottages, towns and restaurants, anyone with waterfront had flares along the shore so that the lake truly became one community.

Finally, after all that, Carol Bennett played the bells in the bell tower.

I hope your 4th of July was as great as mine!

My thanks to Chautauqua Institution for supporting me on this trip.