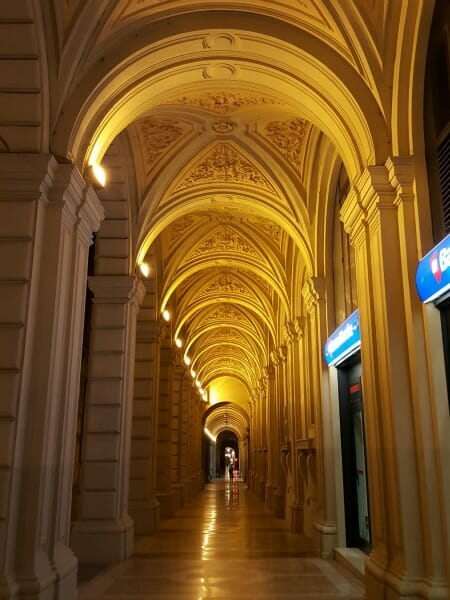 Have you ever had a brief glimpse of a city that left you longing for more?

A short flirtation that you just know would have turned into a beautiful love affair, if only time wasn’t working against you?

Let me tell you about my encounter with Bologna.

I arrived in the city late – very late. I had boarded my flight in Toronto the night before. An hour or two later, we were herded off the plane due to a “software problem.” I’m not sure what that meant, but I am pretty sure that you want all of your systems working before you leave the ground. An hour after that, we boarded the plane again.

Arriving in Milan the next morning, I took a train to Milano Centrale railway station. Because of the flight delay, I had missed my train to Bologna. As I tried to book another train, I discovered that the next two were already sold out. By the time I arrived at my hotel that evening, I had been awake for 34 long hours. Exploring the city that night was out of the question.

I slept 10 straight hours at the perfectly situated, incredibly quiet Hotel Roma, and awoke refreshed to a sunny day and, wonder of wonders, no jet lag! Although I was rested and eager to explore, my long sleep left me with only one hour to see Bologna before boarding a bus to discover more of the Emilia Romagna region.

While searching for coffee in the hotel lobby, I met Norwegian blogger Janicke Hansen of Norske Reiseblogger who kindly offered to give me a whirlwind tour of the city. Here’s what I saw on my one hour tour of Bologna, and why I can’t wait to return. 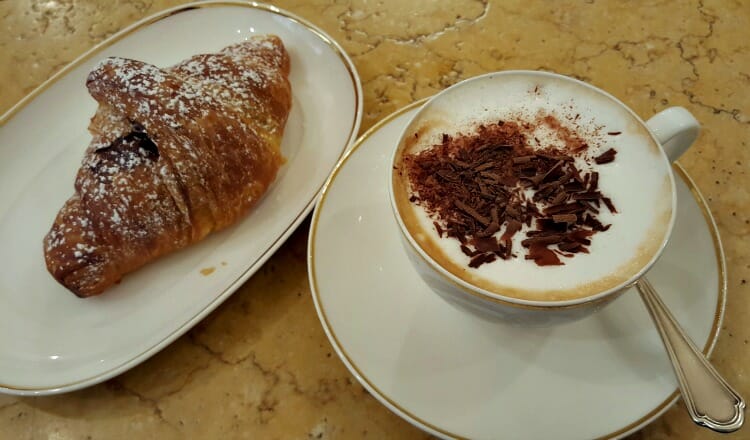 Naturally, the tour started with cappuccino and a chocolate croissant. 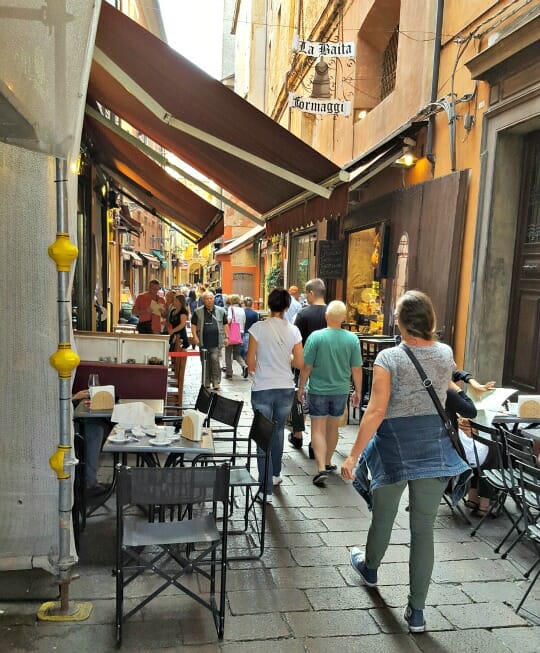 As I followed Janicke down a street leading off of Piazza Maggiore, I had no idea what was in store. 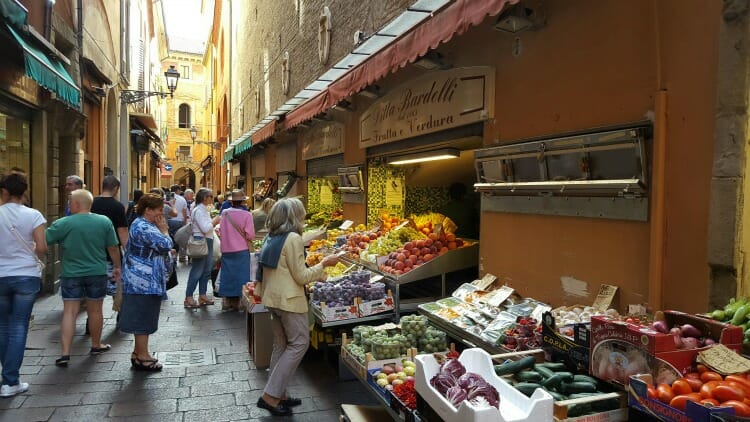 Fruit and vegetables were plentiful, and people shopped with care. 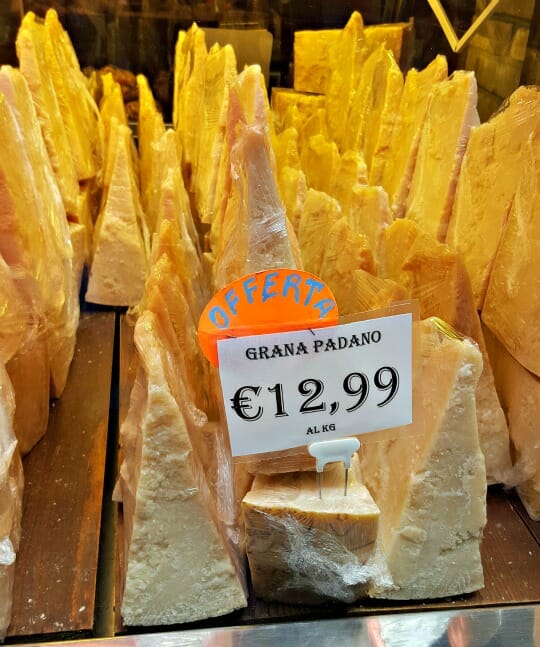 Oh, the cheese! I would learn much more about it on this trip. 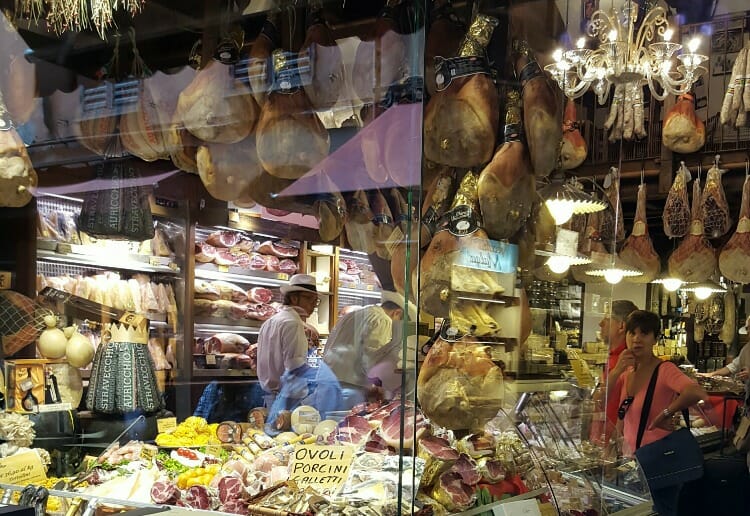 I love that there was a delicate chandelier hanging among the cured meats in this shop. Food is taken very seriously. 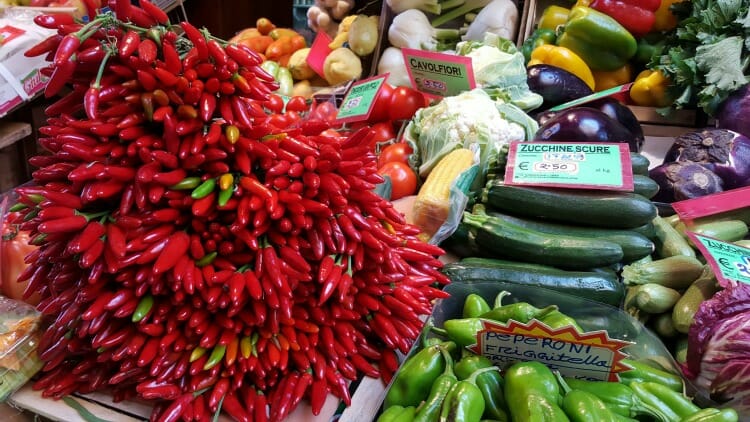 These peppers provided such a burst of color! 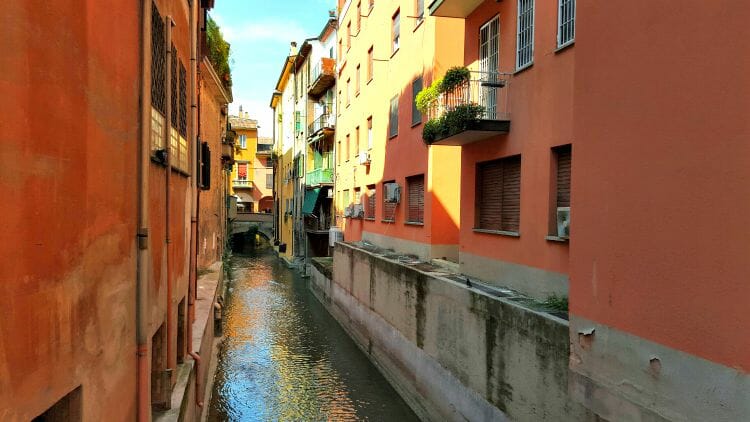 One of the very few visible canals in Bologna. There are 60 km of them, but most are covered now.

Can you see why I can't wait to return to Bologna? We covered a lot of ground on this quick tour, but there was no time for shopping or exploring buildings. Luckily, the Italians don't dawdle over coffee the way I do in North America, so it was possible to fit in a cappuccino. Okay…there was also a brief dalliance with gelato. But then it was back to the hotel and onto the bus to discover more of the food of Emilia Romagna.

My thanks to Emilia Romagna Tourism for making this trip possible.

And thank you to Janicke for the excellent introduction. I hope that you and I – and Bologna – will meet again.