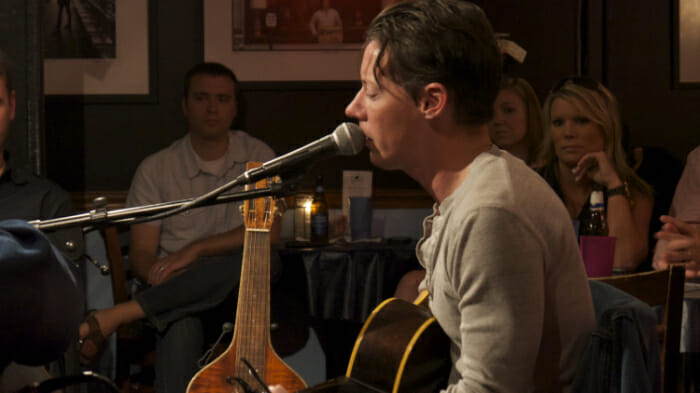 Rick Brantley playing at the famous Bluebird Cafe in Nashville. Tickets are in demand. You need to book one week in advance. Click here for details on making reservations.

I have now been to a Honky Tonk.

I shook hands with a country legend, Jimmy Snyder.

I discovered that a melody with a heartfelt message, even when sung with a twang, has universal appeal.

And (despite growing up in the major cities of Canada and listening to anything but country all my life) I learned that I have more than a little bit of country in me.

And I think I learned why. 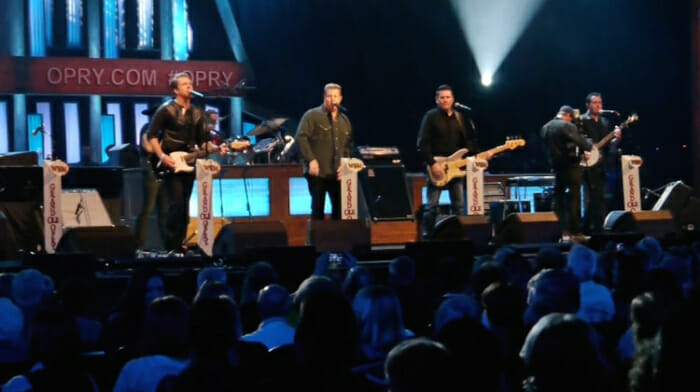 Rascal Flatts at the Grand Ole Opry which is now located in Music Valley on the outskirts of Nashville.

The Music of Nashville: New to Me yet So Familiar

I explored Nashville as best I could in the three short days I was there. But, drawn by the musicians in the Honky Tonks on Broadway who were, without exception, really good, it was sometimes hard to get away to the non-tourist areas. That will have to wait for my next visit.

…and much more. But I returned each day to Broadway where there must be a dozen Honky Tonks. I made the mandatory visit to the famous Tootsie's (Willie Nelson, Patsy Cline, Kris Kristofferson, Waylon Jennings and Roger Miller played there in their early days) but, with a little help from Steve, the manager of Ernest Tubb Record Shop, I found and returned to Robert's Western World the most.

It was at Robert’s, the “home of traditional country music,” that I realized why the music was so familiar. While there are tunes I know – especially those of Patsy Cline and Johnny Cash – there are many that I don’t. And yet, in those tunes that I don’t know there are nevertheless tropes which reached and stuck in the general culture. I recognized them and felt a certain comfort, familiarity and nostalgia. 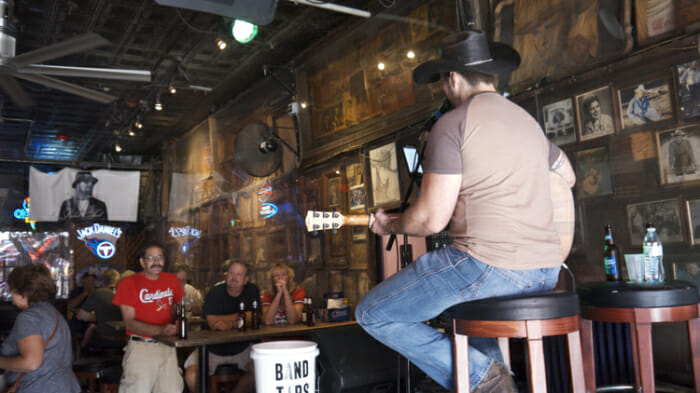 A look at Tootsie's from the front door.

So why did I slide so easily into the country music scene? Because country music has been subtly sliding into my life for the last five decades. First via American television and then American movies.

As a wee one, I watched repeats of Sky King and Roy Rogers. Then there was Bonanza, The Beverly Hillbillies and Green Acres. Okay, that's for those who can remember television of the 60s. In the following decades there were shows like The Johnny Cash Show and The Glen Campbell Goodtime Hour, Dallas and more recently Deadwood and the show, Nashville (a poor reflection of the real city in my opinion). Over the years there have been films such as Urban Cowboy with John Travolta, Coal Miner's Daughter about Loretta Lynn, the Coen brothers Oh Brother, Where Art Thou, Walk the Line, the amazing biopic about Johnny Cash and, of course, the movie Nashville.

Even if I didn't see these shows and films, they still entered the culture at large.

There has been no need to listen to country music to identify with it. A trip to Nashville, listening to the music, touring the Hall of Fame… offer a warm sense of nostalgia even for a city girl. 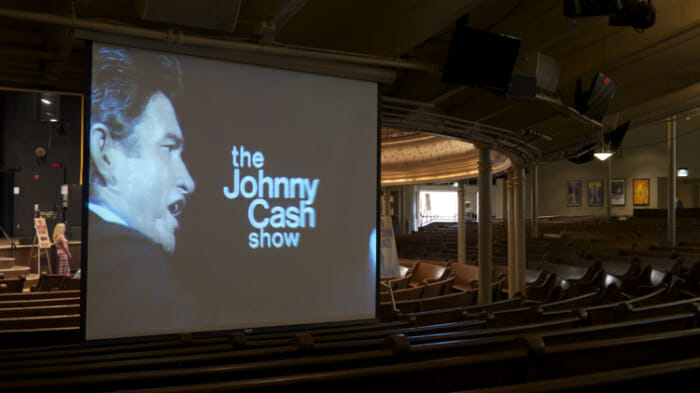 Film at start of the Ryman Auditorium tour is in the historic theater.

Music City It Is

In Nashville, music is everywhere. And it's not all country. Jazz, blues, pop, rock, bluegrass… are all thriving here. There are numerous large concert halls like the Grand Ole Opry (more than you'll find in some larger cities) as well as many intimate venues like the Bluebird Cafe.

The Honky Tonks on Broadway, singer/songwriter bars and cafes throughout the city and into the suburbs, street musicians and large public venues all make Nashville “Music City”.

Chatting with another tourist, I marveled at the music. “There’s so much it’s like I hear it when it’s not even there”, I found myself saying.

But, as I learned just one block away from the bus station before leaving for the the airport, it is there. On many corners, tucked into the traffic light control boxes, are speakers playing Johnny Cash, Little Richard, Vince Gill and other Hall of Famers.

I'll be writing more about this trip including one of my usual “32 Free and Low-cost Tips” posts for this fabulous destination.

I'd like to thank the Nashville Convention and Visitors Bureau for their support with this trip. 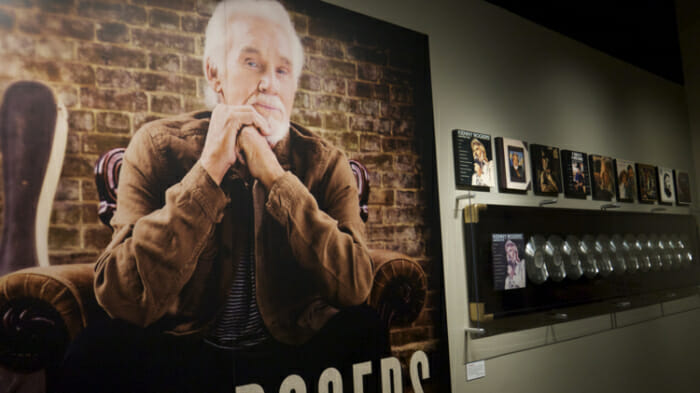 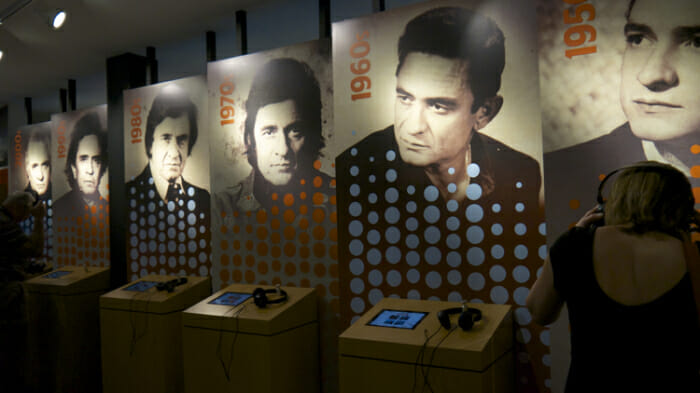 The Johnny Cash museum is just a block south of Broadway. 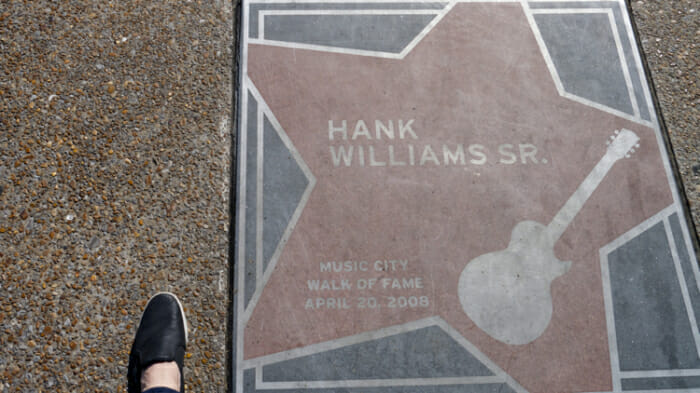 Me and Hank on the Walk of Fame. 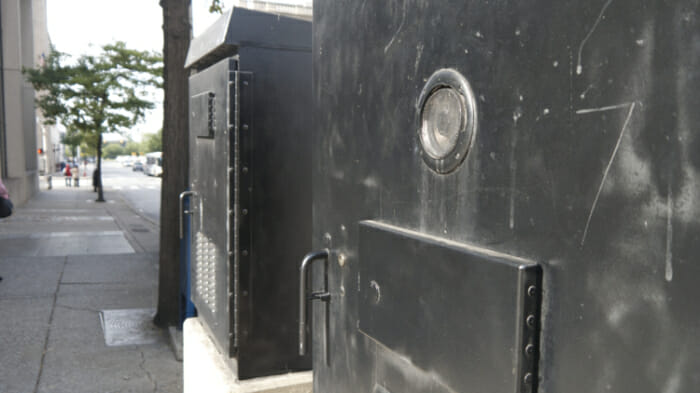 The Music Box I saw wasn't pretty but what a discovery. Some are wrapped with musician photos.