You are here: Home / How to Travel Alone / A Solo Point of View / Taking the Night Train Alone: Five Mini Adventures 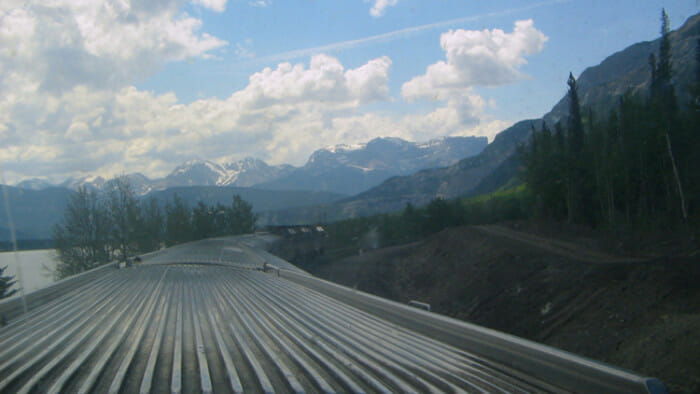 Taking the train into the Rockies towards Jasper from Edmonton.

My first time taking a night train alone was also on my first solo trip.

I was in Europe. With only two weeks available for travel I quickly learned that by traveling at night I could maximize my experience of the continent. Using my Eurail pass, I planned my trip based on a full night on the train rather than on destinations close at hand.

As a result, I've taken night trains through many countries in Europe. But I've also taken them in India, Russia, China, and multiple times in the United States and Canada.

There are several stories to tell. Most of them are wonderful. But one, well, not so much. 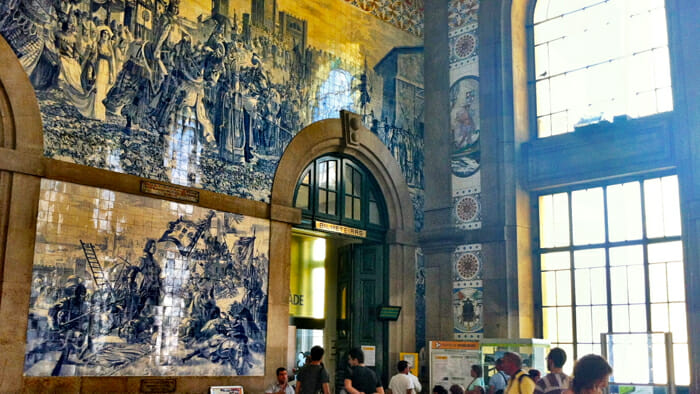 The Night Train Alone and a Solo Travel Safety Lesson

That first trip to Europe was in 1985. It started out poorly as I was caught in a con game in Paris. This experience put me on alert for the rest of my two weeks on the continent and has informed much of my solo travel safety advice on this site.

I went from Paris to Vienna to Budapest and then traveled west again. Halfway through the trip I was traveling on the night train alone from Vienna to Zurich and I had become very capable of speaking up for myself. I was in a compartment alone with one middle-aged man. He looked harmless enough so, with money belt secure and my head on my backpack, I turned my back to him and went to sleep.

I'm not sure how much later but I awoke to find this same man crawling up my body. My sudden strength was formidable as I pushed him off me and the loud fuss I made had the conductor running. Yes, if you generally have a quiet voice, you should find your loud one before heading out solo. You never know when it might come in handy.

I was moved to another compartment where I was told the young fellow was passed out drunk and could do me no harm. The rest of the night was just fine. 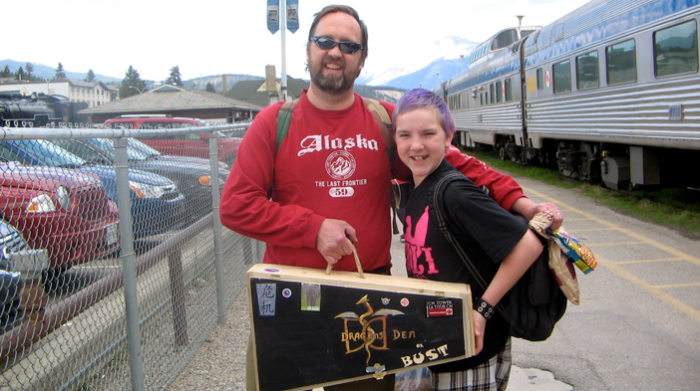 I've met some of the most interesting people traveling solo. This father and son team traveled from British Columbia to Toronto to go on tv's Dragon's Den for their casket-making business.

The Night Train Alone and a Party in Coach

While the comfort of a sleeper can be welcoming I usually travel coach for two reasons: the price and the people. It's cheaper, yes. But if I'm going to spend a few days traveling I also want the people to be interesting and I have found that the people in coach are almost always just that.

In 2007 I traveled from Toronto to Vancouver by Via Rail. Passengers at the front of the train had bedrooms and a dining car with its fine china. In coach we had a seat, a snack bar and a dome car. But I knew I was in for a great time even before we left Toronto's Union Station.

The couple across the aisle from me were traveling from Newfoundland to Winnipeg to see a new grandchild. I had such respect for them. They sat quietly throughout the journey. It was a long haul for them – sitting up in a seat for one night on a boat from Newfoundland to the mainland and then two nights on a train. Such determination for family love.

But then there were the others on board that night. It was the others who made the party

There was the father and son team who had traveled across Canada to pitch CBC television’s Dragon’s Den with their plain, pine wood casket system. They weren’t successful on the Den but what a memorable trip for father and son. At one point, they performed their pitch for everyone in the dome car. There was the aging hippie couple who traveled full-time from festival to festival, hitting as many such as Burning Man as possible. There was the woman who designed costumes for theatre and the Korean family whose sons loved playing Euchre. And the fellow from Israel who was traveling after being dumped by the love of his life. And there was the once-upon-a-time train engineer who took the time to explain how rail signals and switches worked.

If you’re going to spend three days, and nights, on train with strangers they may as well be interesting and memorable. This group was certainly that, as you can tell since I can still write about them eight years later. 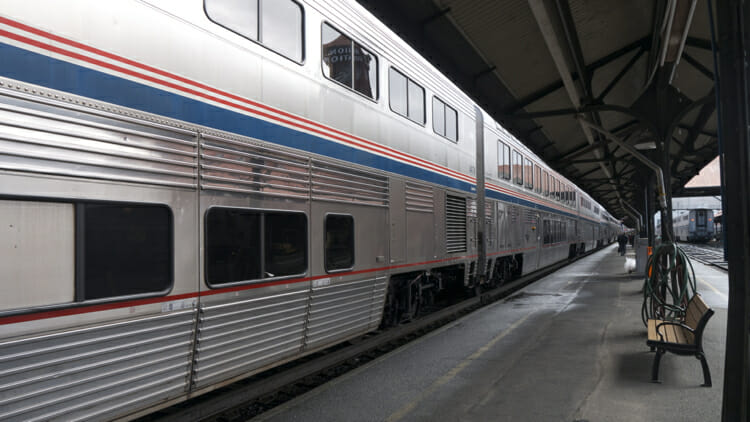 Amtrak from Chicago to Memphis.

The Night Train Alone and an Almost Miss

In 2009 I started Solo Traveler and I did my first trip specifically for stories I might share on this site. That trip was down the Blues Highway, from Chicago to New Orleans, by train. The train is called “The City of New Orleans.” Made famous by the song of the same name written by Steve Goodman and performed by Arlo Guthrie. I chose my stops along the route based on the fact that I only had ten days and could therefore reasonably make only four stops. I chose Chicago, Memphis, Jackson, Mississippi and New Orleans itself.

The ride between Chicago and Memphis was overnight, arriving in Memphis around 7am. I had a coach seat and a small sleeper compartment. This was my first time using one and I checked with the conductor as to whether I would be woken in time to disembark or whether that was up to me. I was assured that I would be taken care of.

However, it didn't work that way.

I was jostled awake by the train coming to a stop. I looked out the window to get a sense of where we were, not thinking that it could be my destination. Then I saw the sign. I scrambled everything into my suitcase and off the train just in time.

The lesson: set your own wake-up call. 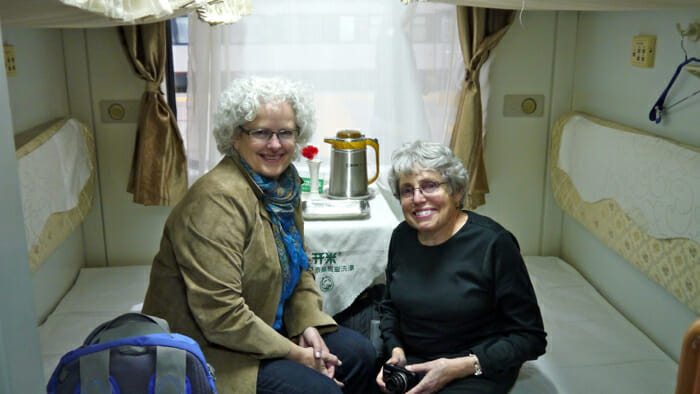 Here I am with my cabin mate Sunny on a pretty luxurious train between Beijing and Xian China.

I was in China, Beijing to be precise, with Overseas Adventure Travel when I had a fall. It was a bad fall and while the blood was oozing out my nose, it was my arm that sustained the real damage.

I passed on the afternoon activities to rest and trying to avoid passing out from shock. By the time everyone returned, I was feeling better and ready to join in the preparations for taking the train to Xian that night. There were 12 of us on the trip and we had a bit of a party that night. Then to bed I went, sharing a room with Sunny. But, in the middle of the night I awoke in severe pain.

I couldn't sleep. Despite the comfortable rhythm of the train, there was not a comfortable position to be found. I ended up just resting, holding my arm straight up in the air. And thinking, what was I going to do? I longed for my acupuncture therapist at home. He'd be able to deal with this.

Then I realized. I was in China. The land of acupuncture. I spent the rest of the night in anticipation of not only having my arm fixed but getting an acupuncture experience in China, the land where it originated! We arrived in Xian in the morning and, with the support of our guide, made it to hospital where I was a guest of the Chinese healthcare system. 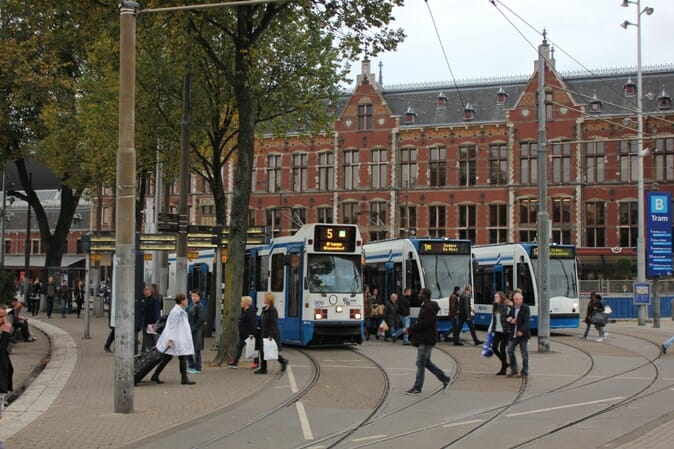 Central Station Trams. Thanks to reader, Laurie, for the photo and for writing Solo Travel Destination: Amsterdam, Netherlands.

My last mini-adventure took place back in 1985 on that first trip to Europe. Though I have had many more recent night train experiences – like being adopted on the night train between Ranthampore and New Delhi and being taught by a woman who only spoke Russian how the Russian train system worked – I want tell you this simple story of taking the overnight train to Amsterdam and then taking it out again the same day..

You see I arrived at Amsterdam Centraal in the early morning and made my way to the hostel I'd booked near the Vondelpark. I couldn't check in that early so I left my pack in the storage room and sat in the common room to get a sense of the place and plan my day.

But as I looked around I wasn't sure I felt right there. After the con game in Paris and the fellow who had crawled over me on the overnight train between Vienna and Zurich, my gut was on high alert. Combine this with the reputation the city had for sex and drugs at the time and my gut wasn't liking the feel of the place. And by this time I was trusting my instincts.

So I packed as much as I could into that day in Amsterdam. From Anne Frank's house to the Rijksmuseum to walking the canals and riding the trolleys, I explored Amsterdam. Then I collected my pack and left on the night train to Paris.