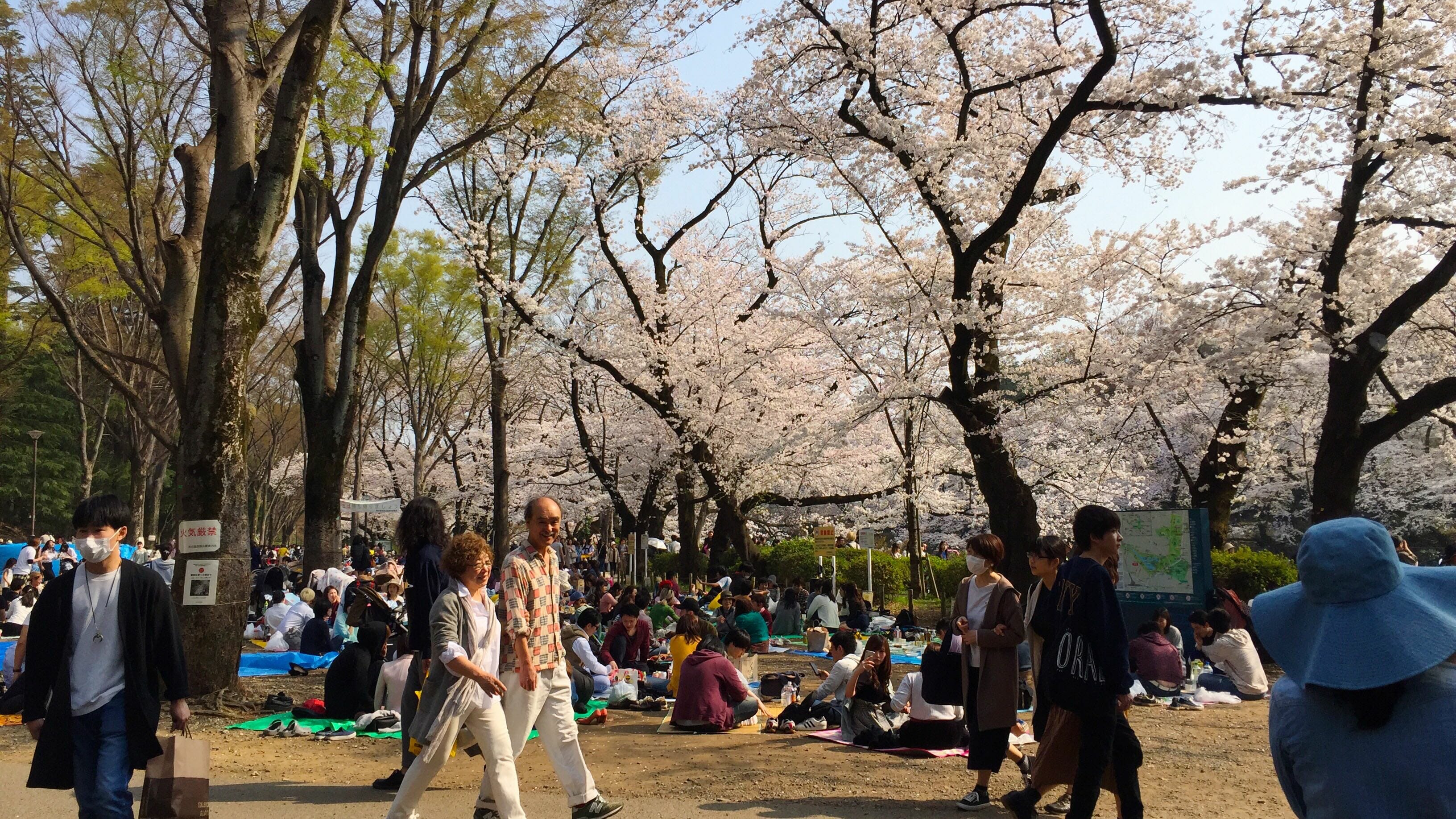 Tokyo at the height of the cherry blossom season.

I arrived at the Tokyo Train Station to set out for Kyoto on my first full day in Japan.

I entered, stopped and looked at the size of the station.

I was mouthing, “oh boy, oh boy, oh boy” when, on my third “oh boy,” I was approached by an elderly man with limited English wanting to help.

I showed him a piece of paper that said, in Japanese, that I was looking for the counter where I could exchange my Japan Rail Pass voucher for the actual pass. A woman at the hostel had kindly written this out for me. He took me to the ticket counter and stayed with me to ensure that I was alright and then off he went.

He didn't seem completely sure of where I needed to go. His help seemed like a random act. But as I was standing in line to get my actual train ticket (for the bullet train to Kyoto you need one), I saw him go by the window and he looked intent on finding another person to help. A rogue volunteer to help tourists?

In 2013, Christel Takigawa, the Tokyo Olympic Bid Ambassador, used the word “omotenashi,” a term expressing the spirit of Japanese selfless hospitality, in her speech to the IOC. The Japanese are known for their hospitality. I was told by many travelers before I went, that I would enjoy it.

But in addition to the natural hospitable nature of the Japanese there are many organized volunteer tour guide groups as well, to ensure that visitors have a great experience. There is the Global Greeter program which I signed up for (see below) and there are the Systematized Goodwill Guide groups organized by The Japan National Tourist Organization. Such groups can be found in dozens of cities throughout the country.

And with the upcoming Olympics the scale of volunteerism has grown. In July 2017, Tokyo started the process of recruiting 90,000 volunteer tour guides to help with athletes and tourists coming to the Olympics.

Whether organized or not, Japanese culture is imbued with gracious hospitality.

I lived this everywhere but nowhere moreso than in Tokyo.

Tokyo is a huge city and I was lucky to have two women to show me their favorite Tokyo sights. 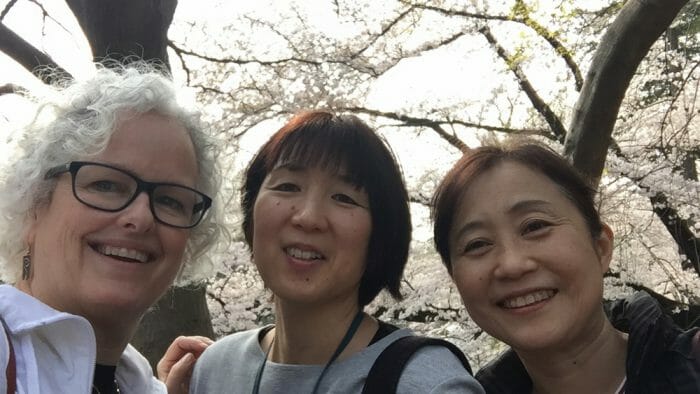 From left to right there's me, Keiko (a Tokyo greeter) and Kiyomi (a friend of a a friend). So many ways to meet locals.

I was lucky to have two women to meet and tour with in Tokyo. Keiko was my Global Greeter guide. Kiyomi is a Tokyo native, and a friend of a friend in Toronto. I spent half a day with both women and then much longer with Kiyomi. All three of us met at Kichijoji Station and then took the tour of that neighborhood led by Keiko.

We first went to Inogashira Park which was a gift from the Emperor to the people back in 1918. The pond in the center has swan boats that you can rent. Walking the circumference of the pond is what most people do. There's also a zoo, the Benzaiten Shrine and, sometimes, street musicians. We walked through the park chatting about the social place the park holds for people but also about Keiko's family, her daughter and life in the neighborhood.

As you can see below, from the park we wandered to the Ghibli Museum and then to the Kichijoji market. Kiyomi and I parted ways with Keiko at the subway station and continued our visit. 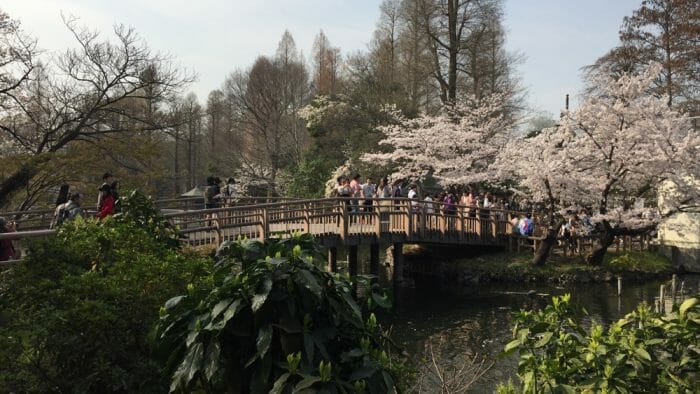 Beautiful Inogashira Park is well-known for its cherry blossoms and I managed to be there on the day they were at their peak. 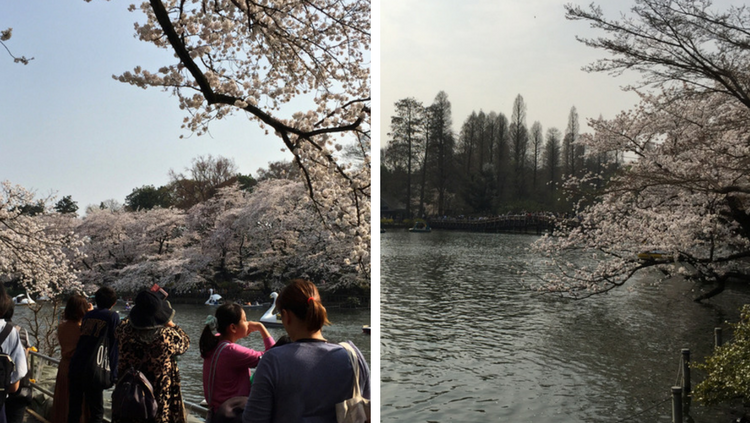 The pond is the central attraction of Inogashira Park. 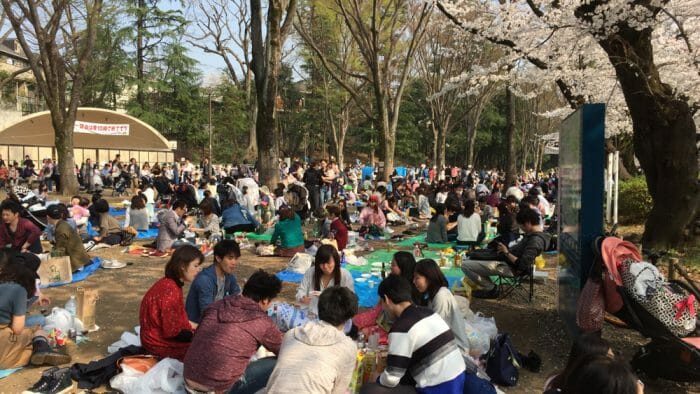 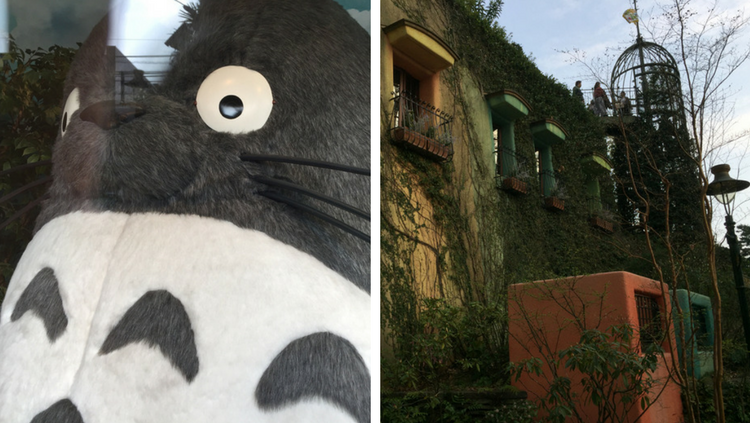 Not far from the park is the Ghibli Museum which showcases the work of Studio Ghibli, a Japanese animation studio. You have to book about a month in advance to visit. 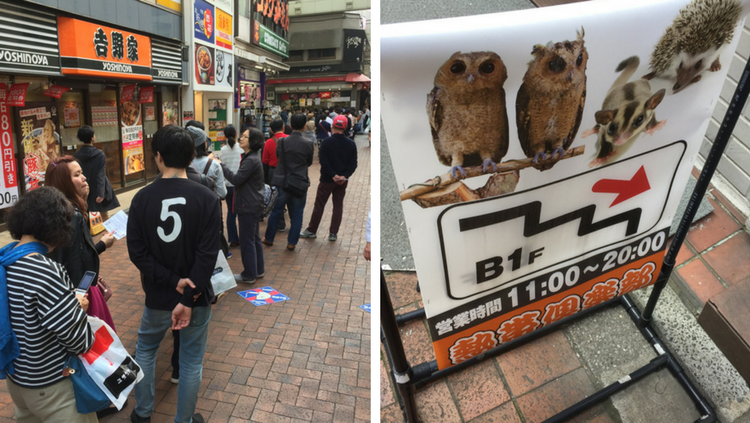 Finally, we went to the Kichijoji Market. On the left is a very long line to buy beef at a famous shop. On the right is a sign for an Owl cafe. Yes, they have owl cafes, cat cafes and more in Japan.

After leaving Keiko, I learned that Kiyomi had great plans for the rest of our day. Such generosity! She gave of her time and knowledge and even brought her daughter to join us for dinner.

We started by going to Asakusa, famous for Sensō-ji, a Buddhist Temple. We walked through the Nakamise Dori, past a line of shops towards the Temple. Along the way we stopped for an O-mikuji fortune. The process is quite unique. You pay 100 yen and then shake the O-mikuji box on its side until an O-mikuji rod pokes out from a hole in the box. You need to be able to read Japanese for the next steps because the rod you received has a number on it written in Japanese. You then find the number of the box that corresponds with the number on your rod. In the box is your fortune which is, again, in Japanese. With Kiyomi's support I learned that my fortune was not good. In that case, roll up the paper and tie it to a stand along with the other bad fortunes. No sense in bringing that back home with me.

The Japanese tradition of honoring ancestors is particularly poignant for me since I no longer have my parents. After the O-mikuji fortune we joined the line for the Temple. It's not complicated, but how fortunate I was to have a teacher with me. At the front of the line, you approach what looks like an altar where you give some money. You say a prayer for your ancestors and then pull the rope ringing the Shinto bell (for a positive future and to avoid misfortune) at the top. Shinto bells can be quite large so this was actually more difficult that I expected.

From there, Keiko and I then went to the Ginza area to meet up with her daughter and have a meal. I had been having some difficulty in Japan because I don't eat meat. Again, it was helpful to have her with me. We went for soba noodles and tempura. After finishing we took the metro once again, this time to Chidorigafuchi to see the cherry trees which are at lit up at night.

This was a huge walking day, 18 km in total. I was ready to go back to my hostel and Kiyomi, ever kind, took the metro with me to the station for my hostel.. but!

But I took the wrong exit out of the metro station and got quite lost. I was standing on a bridge, looking at a map when an elderly man who was out with his friends, came over to help. After a bit of turning the map around and around they figured they knew where I had to go. They walked with me to the other side of the bridge and we stopped in at a small police station who confirmed our route. They took me all the way to my hostel. No English was spoken.

Below you'll see in the photos that Kiyomi and I met again the next day for a bit of shopping. I was sorry to leave her but my trip was coming to an end. Just before seeing me off on the metro on my way to the airport, Kiyomi put a barette in my hair and took a photo. 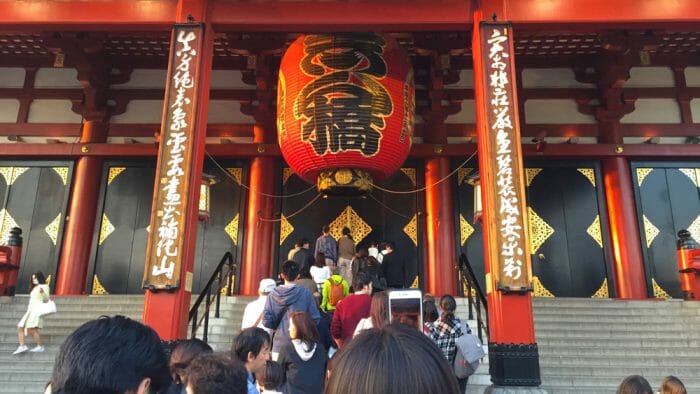 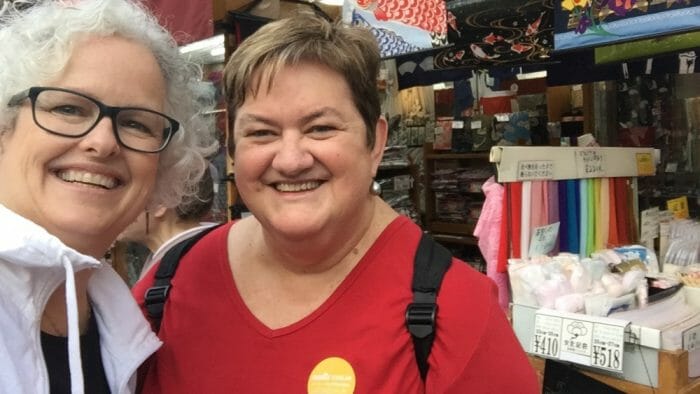 On the way into the shrine a reader stopped me. This is Judith, from Canberra, Australia. 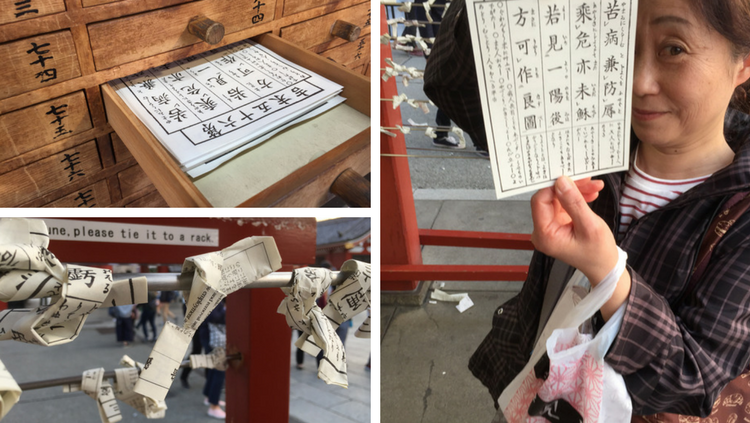 Before going to the shrine to pay respect to our ancestors, Kiyomi and I stopped to get my fortune. Sadly, it wasn't very good. If this is the case you fold it up and tie it to these bars. Yes, I just left it behind. 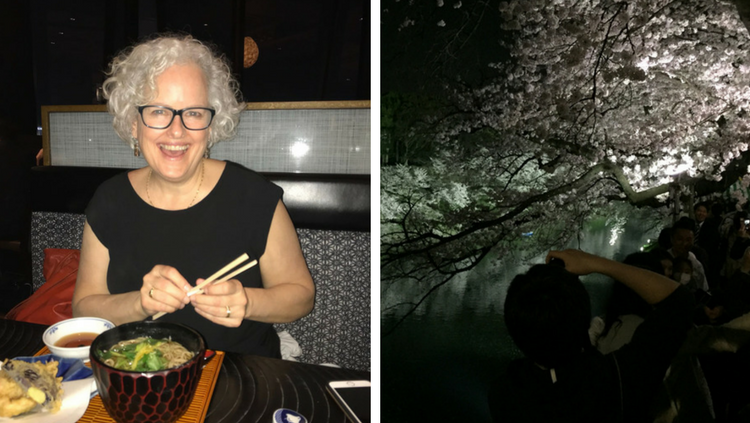 That evening Kiyomi's daughter joined us and we went out for dinner in Ginza. We had soba noodles and tempura. From there we went to Chidorigafuchi, a moat on the northwest side of the Imperial palace, to see the cherry blossoms at night. 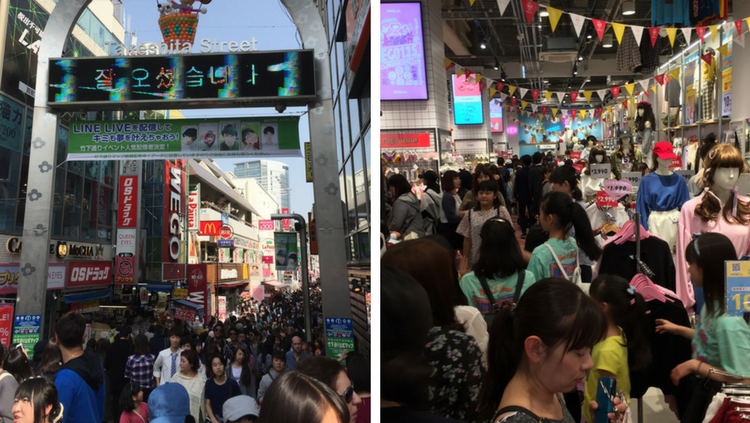 The next day, Kiyomi took me to Takeshita-dori street in the Harajuku area. 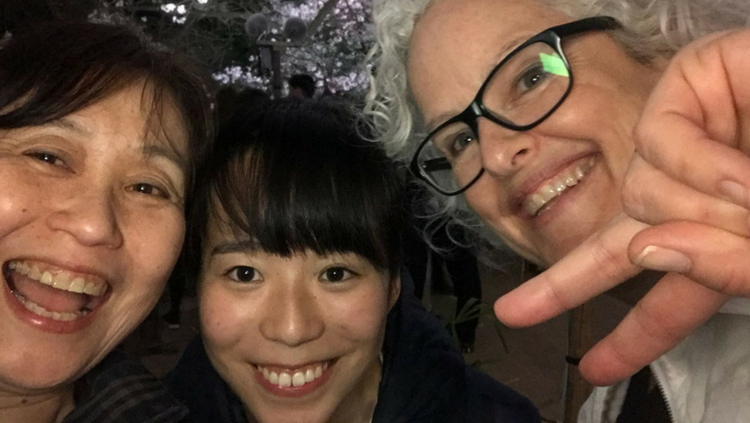 Kiyomi, her daughter and me.

For more on Japan travel read: