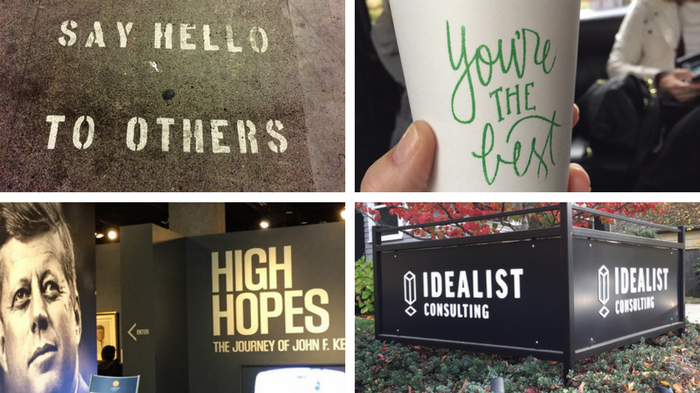 Clockwise from upper left are evidence of a positively welcoming city: a stencil on the sidewalk encouraging us all to connect; uplifting words on a coffee cup; the hopeful name of an exhibit on JFK at the Oregon Historical Society and the optimistic name of a consulting firm.

It's a city where social responsibility, cooperation, and mutual support are part of the culture.

Where creativity is valued.

It is maker-movement central in North America

Where coffee and craft beer are king.

They pioneered the craft beer movement starting in the early 1980s.

Portland is a city with high culture (the Oregon Historical Society‘s museum and the Portland Art Museum are just two examples), low-to-the-ground culture (the many craftspeople and maker's spaces are evidence), and quirky culture, such as the Vacuum Museum, the Caravan Campfires event every Wednesday at the Tiny House Hotel, and the Weird Furniture Club.

Portland is a city that takes pride in its unique and sometimes unusual culture. 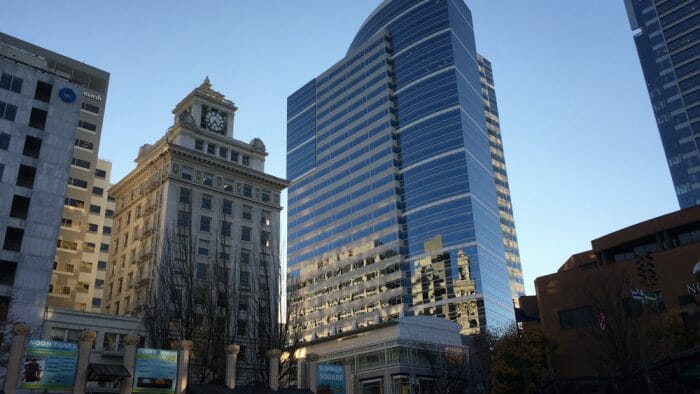 Portland is a city where urban planning works on a human scale. There is a height limitation for buildings and an urban growth boundary to limit sprawl. Since the city can't expand up or out, neighborhoods are being modified to meet needs.

The Portlanders I met live creatively and are socially engaged. That may mean that they live in a creative space such as a tiny house to reduce their footprint, that they make their living by creating things with their hands, or that they support creativity in the coffee they drink, the clothes they wear, and the furniture they buy.

Or it may be all of the above.

Having recently become a maker myself (I sewed out of necessity when I was teen, but now I do it for pleasure) I found the makers I met were generous as they shared the “how” of their crafts. In fact, makers beget makers in Portland. They are not only generous to an outsider, they actually support new makers and create their own competition with the knowledge that because they are so unique, there is space for everyone.

As a traveler, I felt that Portland delivered not only a fascinating destination but inspiration. I returned home from Portland with my creative juices flowing. 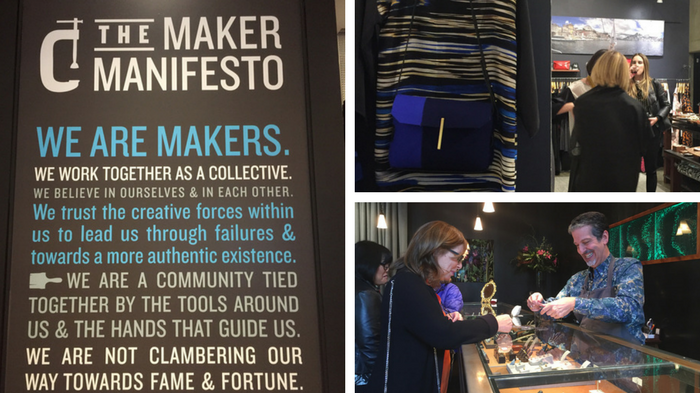 I went on a Makers Tour of Portland. Take a tour or a class when you're there. On the upper right is Garnish Apparel (call in advance if you want to book a stylist appointment) and the lower right is Alchemy Jeweler, both are located in the Pearl District. 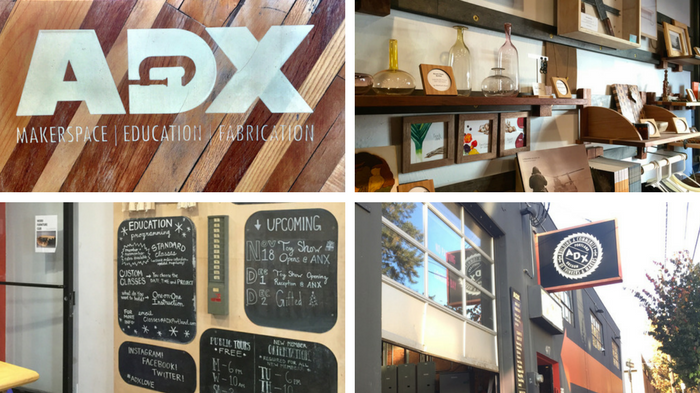 ADX is one of the larger makerspaces in Portland. It's a hub for cooperation and collaboration. Tools, knowledge and experience are shared. 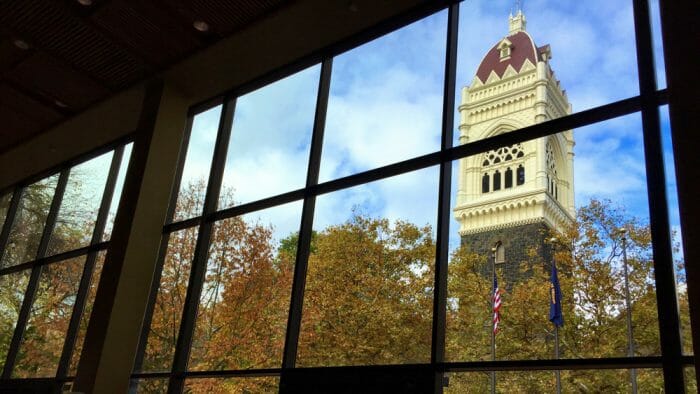 I took in the JFK exhibit at the Oregon Historical Society Museum. The exhibit was fascinating and very busy when I was there. This is a view of the First Congregational Church from inside the museum. 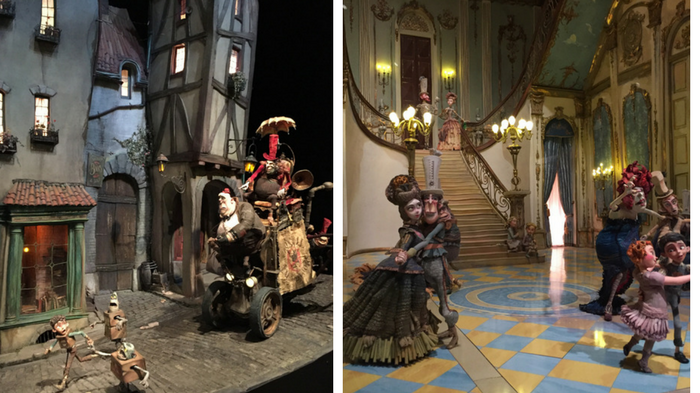 In addition to its permanent collection, the Portland Art Museum offers special exhibits and events. When I went I saw Animating Life: The Art, Science, and Wonder of LAIKA (see images above) as well as The Wyeths: Three Generations. The museum offers free admission on the first Thursday of the month as well as $5 Fridays. Both offers are from 5-8 pm. 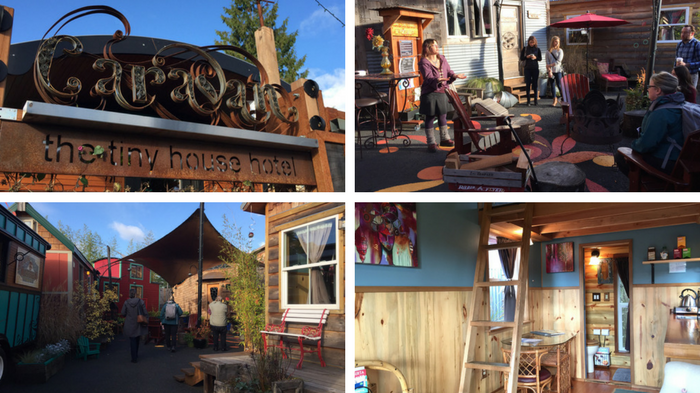 The Tiny House Hotel was a real treat. After learning about the history of the hotel we got to explore how so much living can be tucked into a small space. Yes, you can book a tiny house for your stay in Portland. There are six tiny houses all of which sleeps four people except one which sleeps three and is wheelchair accessible. The largest is 170 square feet. 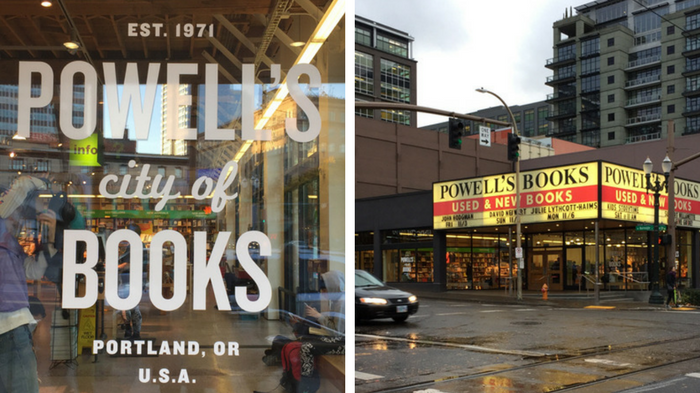 Powell's City of Books has a reputation for being the largest bookstore in the world. While I'm often skeptical when things get such definitive adjectives, my guess is that it is – or at least one of the biggest. The store is divided into 8 color-coded areas all focusing on specific themes. Each area is the size of three or four typical bookstores. 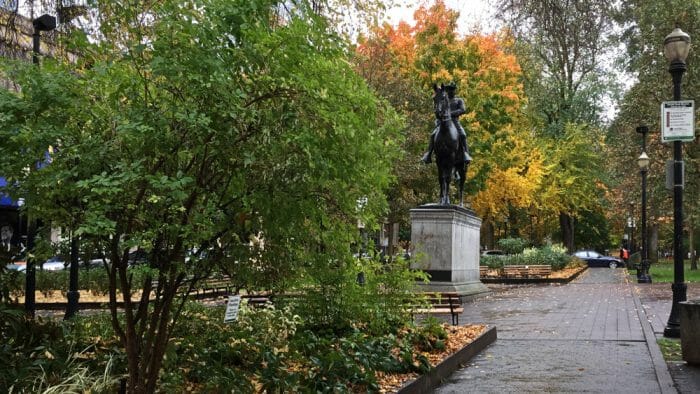 The park on Park Avenue in the Cultural District in Portland. 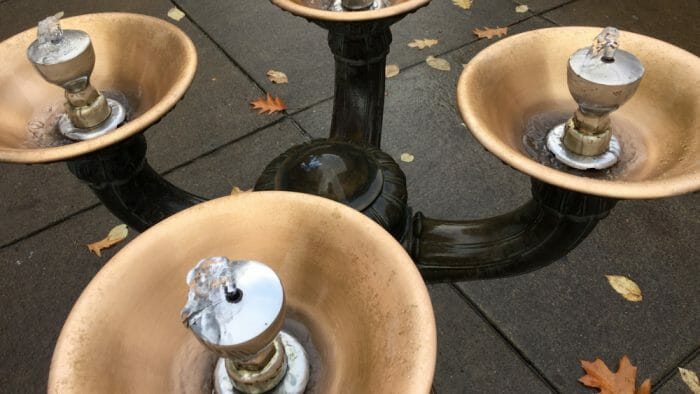 This is a Benson Bubbler. According to Wikipedia, these drinking fountains are named after businessman and philanthropist Simon Benson who donated $10,000 for the purchase and installation of 20 fountains, mostly in Portland. Portland also had me bubbling with ideas.