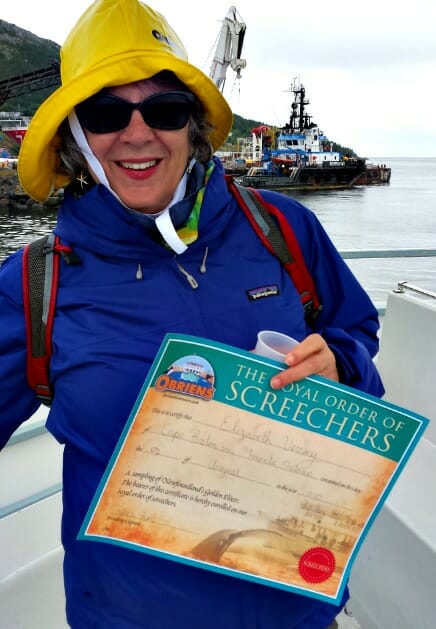 My Dad was a deck boy when he sailed around this cape and wrote a limerick about the capes of the world.

In 2013, I walked to the tip of Cape Hope when I visited South Africa. My Dad sailed around both of these capes and being there made me ponder the other adventures he’d had in his youth.

It was a thrill to get out on the rocks and realize that I was on the most eastern tip of North America. If I could see far enough across the ocean, I would see France!

It was a mild day and the waves were still 20 feet high, crashing on the rocks. There was a lighthouse with a painting exhibit of the lighthouses around Newfoundland. There are very few staffed lighthouses left, but the woman at the exhibit told me that they were looking for a lighthouse keeper for one in Cape Norman. You work 28 days in a row then get 28 off and the pay is good. But, the isolation is complete. A fellow joined in our conversation to say that he was raised in a lighthouse and it was not easy. Although he left a lot unsaid, we understood how hard it must have been to be cut off from other people. He had five siblings, so they did have each other, but there was lots of work to be done, and no town nearby.

From Cape Spear, I saw spouts from the many whales offshore. I decided that it would be a good year to do a whale tour.

After doing some research, I chose O'Brien's Boat Tour as they were the first company (1985) that started up on the east coast of Newfoundland. I wanted to see more whales so I took the tour that also visits the Witless Bay Reserve to see some Puffins, which has always been a dream for me.

Karen from O'Briens agreed to have me go aboard as their guest. I was very excited – there were whales everywhere!  I will guess that I saw 20 of them. Our tour guide was very entertaining and when I started up a conversation with him, I found out that he was Con O'Brien from the Irish Descendants. They are a well-known folk group and were all workers in the fish industry before forming their band in 1990. They tour all over the world now and have produced many albums. His mix of entertainment and education was perfect. He even taught us a sea shanty!

I also learned a lot about Puffins. Con calls them flying footballs. Puffins are the provincial bird of Newfoundland and Labrador and they are adorable! I had waited my whole life to see one and I was not disappointed. They are hardy birds that swim better than they fly and they keep their eyes open underwater. They spend more time in the water than on land and I still find it hard to comprehend that this tiny bird survives the winter in the ocean.

Puffins beat their wings 350 times per minute to stay airborne. They mate for life and although the pair separates for the winter, they reunite at their home each and every summer. Their homes can be up to 8 feet deep and have two rooms. As they come in to feed their young, a few seagulls can attack them to try to get the capelins that they are bringing to their chicks. I learned that this small fish, the capelin really drives the economy here in Newfoundland. It feeds the whales and puffins that migrate to Newfoundland each summer. 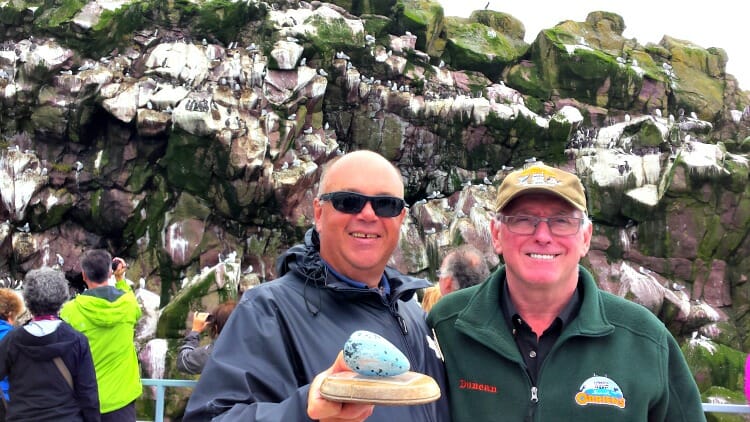 I was “screeched in” on the boat by Con. This is a long-held tradition in Newfoundland, to become an honorary Newfoundlander. You join the Royal Order of Screechers. You repeat a tongue twister, take a shot of Screech and kiss a cod fish. Screech is Newfoundland’s Golden Elixer, a rum with 40% alcohol. A couple of the bars have a frozen cod on hand for screeching in ceremonies. On the O'Brien boat, you repeat the tongue twister, drink the Screech, get a Sou'wester (yellow fishermen’s hat) and kiss a toy puffin. It was a much better option than kissing a cod fish, in my mind!

Another thing that’s worth mentioning is that O’Brien’s has a dining area called the Sailors Galley and I was thrilled with the quality of the food. My Pan Fried Cod with Scrunchins (small bits of fried out pork fatback) was exceptional. All the food looked delicious and the staff were friendly and helpful with my gluten-free restrictions. 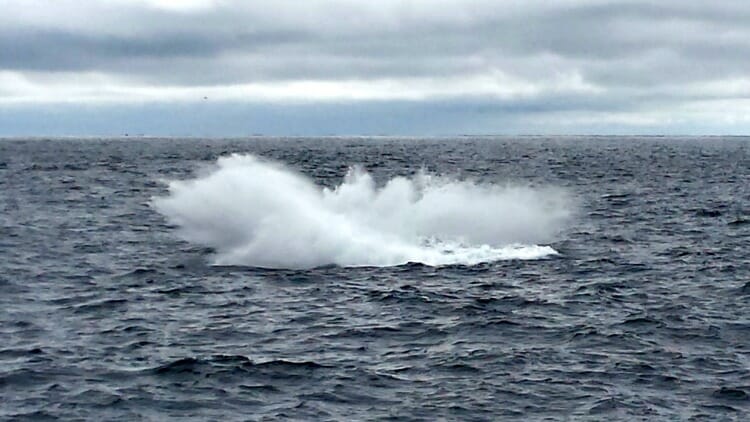 The splash of a whale

In Elliston, I was hosted by the Bird Island B&B which overlooks an island filled with Common Terns, Great Black-backed Gulls, and Cormorants. They are pretty entertaining and whales were frolicking in the bay during my stay as well. Charlotte and Robin run the B&B and their daughter Raven pitches in when needed. They put on a fabulous breakfast and Charlotte is a cheerful short order cook. She was prepared with gluten-free options for me and I was delighted with the breakfast she rustled up.

They have three rooms and one efficiency unit and plan to add another efficiency unit very soon. The spaces are very clean and well organized. Charlotte and Robin are friendly people who have lived there for over a decade. They encourage guests to use their laundry facilities during their stay, which is so helpful while traveling.

A short drive away is an awesome puffin viewing site. This is another spot where the Puffins drop in for the summer to breed. A few of them even came over to the mainland to visit us! They were very curious about their fan club. The birders who visited had serious camera equipment and delighted in seeing all the intimate details of the puffins’ daily lives. 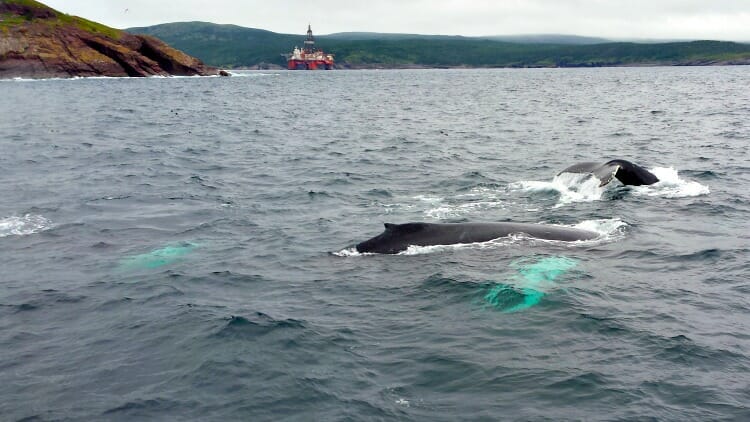 Charlotte told me about Nanny’s Root Cellar Kitchen just up the road and I’m thrilled that she did. They serve home cooked meals and I had the cod for dinner, which was divine. They even gave me a 15% discount for staying with Bird Island B&B!

There was a selection of jams made from a 150-year-old recipe and I bought some bakeapple jam. It was unusual and I’m very pleased that I tried it. The bakeapple is internationally known as a cloudberry. In Newfoundland, ‘bakeapple' is anglicized from the French, ‘baie qu'appelle' meaning, ‘what is this berry called?' It is similar to a large raspberry and has a distinct honey/apricot-like flavor. The fruit is red before it ripens and turns a golden orange at maturity. I enjoyed it on toast, but liked it best on top of cheddar cheese on my crackers.

The weather happened to be outstanding this year and I was so glad that I had chosen this summer for my first visit. I would like to return to spend more time exploring solo in Newfoundland in another season.

Elizabeth Verwey lives in Toronto and operates Spoken Lives: Stories Women Share. Elizabeth is a business mentor (and new solo traveler) who supports women to establish this speaker series in their own city.