You are here: Home / How to Travel Alone / A Solo Point of View / A Few Good Reasons to Love Airports 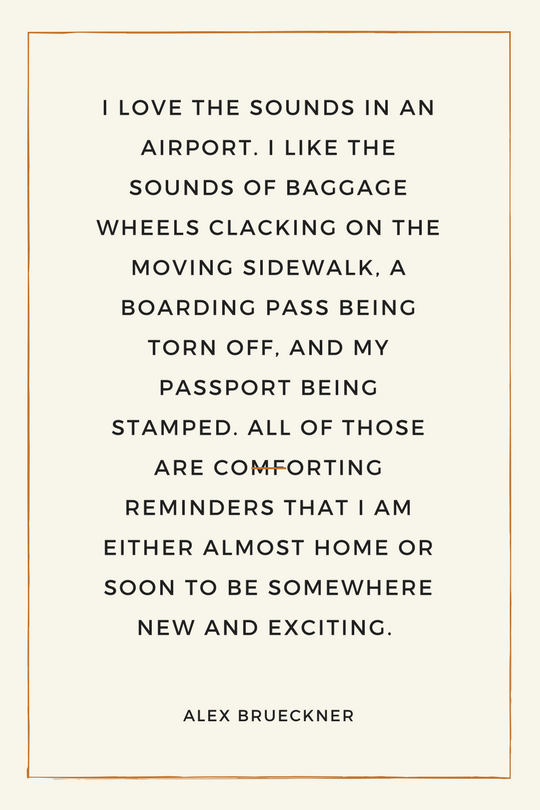 I had thought I was alone.

On the few occasions when I had mentioned my affection, it had been met with derision. It felt like a confession better left unexpressed.

Then, one day, the quote to your right popped up in my Facebook newsfeed, from a blog called Athletes Abroad. Alex Brueckner clearly shared my feelings.

Most people I know hate airports: getting to them, navigating through them, waiting in line-up after line-up, paying extortionate fees for food and drink, and (one of the most frequent pet peeves I hear from solo travelers) managing luggage when using the washroom. People will often say that they can't relax until they have boarded the plane.

For me, it is the opposite. I do not enjoy flying. Mine is not the body that designers had in mind when creating airplane seats. Flying for me is supremely uncomfortable, something I suffer through in order to quench my thirst for travel.

I love the feeling of having no responsibility other than making sure that I board my plane on time. It is as though time is suspended – you can’t leave, someone else is making all of the rules and all of the decisions, you’re entirely at the mercy of the airlines – so you might as well surrender to the experience and make the most of your time. I generally arrive at the airport three hours before my flight and pay to spend a couple of hours in an airport lounge. I like the comfort, the calm, the large private washrooms, and, I’m not going to lie, the free drinks. But mostly, what I appreciate is a comfortable chair, good WiFi, and electrical outlets at my seat.

I shared Brueckner's quote with members of the Solo Travel Society, our Facebook community, and asked how they felt about airports. Much to my surprise, the responses were largely positive. 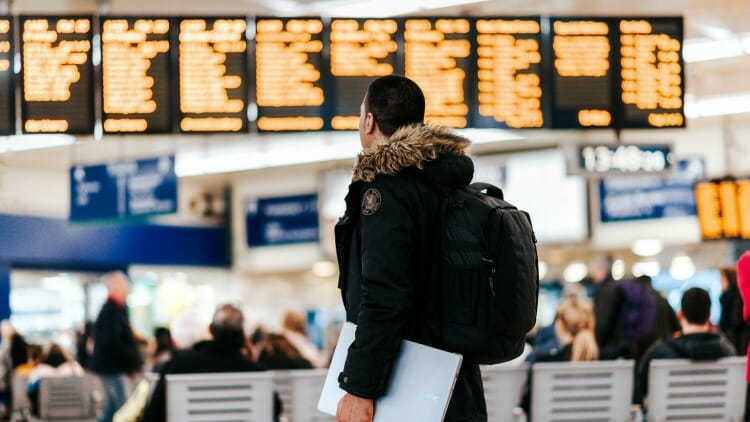 Photo by Anete Lūsiņa on Unsplash

The Solo Travel Society Shares Their Love of Airports

People watching is a popular activity for solo travelers at airports. Marissa said, “I always joke about how I would live in an airport. It's so great for people watching. I love looking at the destinations and who is waiting to board, whether they look excited, indifferent, nervous, etc.” Bobby agreed, even going so far as to say that airports are “probably the most exciting public space out there for me. A great place to observe humanity on the move!”

Bev's passion for airports isn't limited to days when she is catching a flight. “I have always loved airports, and still do,” she said. “I grew up in the San Francisco Bay Area and, ever since I could drive, would occasionally trek the hour out to SFO just to walk around, sit in the cafes, listen, and watch people and the process of leaving and arriving. In my late teens, it sometimes served as a casual “test” for potential serious boyfriends!”

Some people, like the author of the quote above, mentioned their sensory experiences in the airport. Ali and Nor spoke of how much they enjoyed hearing the sound of the announcements over the loud speaker. Annabel said, “Oddly enough, I love the smell of the airport in the morning.”

There can be a lot of emotion attached to airports as well: the excitement and anticipation at the beginning of a journey, the sadness (or gladness) of returning home. Rosalinde said, “If I’m in the international airport leaving on an adventure, I love it like nothing else! But come home time, I find it totally depressing.” Dawn loves airports because when she's in them, she's either “heading somewhere interesting or has memories of somewhere while heading home.”

“Apart from the feeling of traveling,” said Alex, “you can also feel and see the place is filled with different emotions. From families, couples, or friends reuniting with joy to individuals separating from loved ones with sorrow, it truly is a beautiful place to people watch and extends our reach to the outside world!”

And finally, Stacy noted that the beginning of the film Love, Actually did a good job of representing what Alex was talking about. I had to look up the quote, as it has been years since I watched the film.

Whenever I get gloomy with the state of the world, I think about the arrivals gate at Heathrow Airport. General opinion's starting to make out that we live in a world of hatred and greed, but I don't see that. It seems to me that love is everywhere. Often, it's not particularly dignified or newsworthy, but it's always there – fathers and sons, mothers and daughters, husbands and wives, boyfriends, girlfriends, old friends. When the planes hit the Twin Towers, as far as I know, none of the phone calls from the people on board were messages of hate or revenge – they were all messages of love. If you look for it, I've got a sneaky feeling you'll find that love actually is all around.

Relaxing, people watching, excitement, love: if you can get past the annoying parts, there are definitely some reasons to love airports.

Where do you fall on the love 'em or hate 'em spectrum when it comes to airports? Please share your thoughts below.

For more about flying and airports, see: