You are here: Home / Solo Travel Destinations / Europe / Ireland / Solo in Galway: An Evening with Eugene 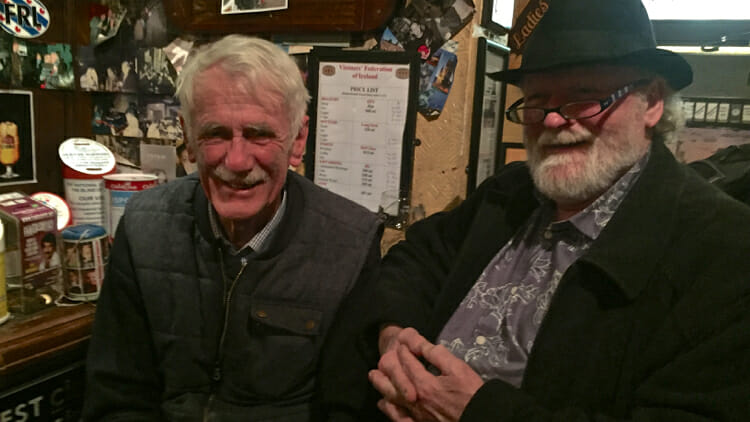 Eugene and buddy in the Tig Coili pub. Eugene is on the right.

Galway is a friendly town. It's a happening town! With a university near its historic center it has a young vibe with lots of pubs on pedestrian mall streets.

In the evening of my first day there I went to the Tig Coili, a great little pub with lots of character and music but I didn't see the local characters I was expecting. At least, not at first.

Then I spied them. Over near the bar there were two older gentlemen who were definitely local. So I went and stood nearby and, sure enough, within a few minutes I was engaged in conversation. It was not me who started it of course. I'm a bit too shy for that. My role was simply to respond to a “hiya”. Which I did. And, as is typical with the Irish, the conversation continued on from there.

I was speaking with Eugene and his friend who happened to be a tour guide. They were both eagerly responded to my curiosity about their city. Clearly, they loved Galway and loved talking about it even more. It wasn't long before Eugene, a retired fisherman (just one of his many trades) was offering to show me around. It wasn't due to my prompting but I can't say that I objected for a minute. So we headed out for an impromptu tour. 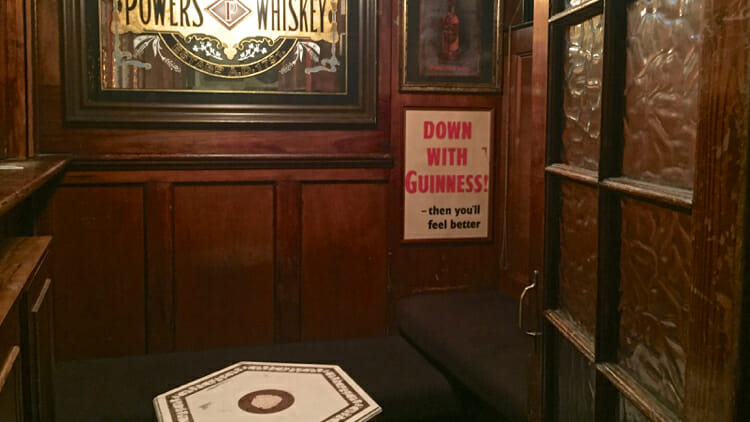 This is a snug. Small, narrow and difficult to get a photo of. The snug, or schnug as Eugene called it, is a small private room in a pub that has it's own entrance and a window to the bar that you have to stand to reach.

Solo in Galway and an Impromptu Walking Tour

In the Tig Coili we talked religion and pubs and Galway and how life has changed. Then Eugene mentioned the snug which he pronounced shnug. The what? The shnug! Up until the 60s, women were not allowed in pubs in Ireland. And when they were finally admitted they had a separate room at the front of the bar from which they’d be served. As it was explained to me, not just women but also priests used the snug.

So that's where my evening tour with Eugene started. We left the Tig Coili to see a proper snug at Garavan's bar. And we continued on from there. (To be clear, we were walking through a busy city. Staying in public is a key to staying safe with someone new.)

Eugene showed me what he disliked about Galway – the chain stores that have made it onto the main streets. These are an inevitability in any city.

But, more importantly, he showed me the Galway he loves.

He pointed out plaques, especially the one above the Tigh Neachtains pub at the corner of Cross and Quay streets that honors Humanity Dick (so dubbed by King George IV) who started the Society for the Prevention of Cruelty to Animals.

And pubs that distinguish themselves in unique ways like The King's Head that has a dramatic history that goes back 800 years. 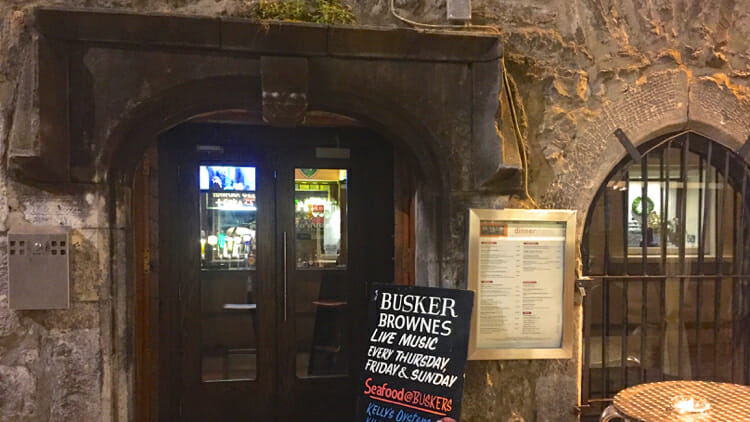 Look at the stone work above the doors and the window. With all the modern developments these medieval architectural elements remain.

He showed me a few of the remaining arched doorways that hint at medieval Galway. Look carefully when you're there and you'll actually see quite a few.

When we reached the River Corrib he told me about the Fishery Watchtower designed for netting fish and watching out for illegal fishing. Today it's a museum.

Walking up the river he pointed out the canal system and how it controlled water for the many mills on the river. 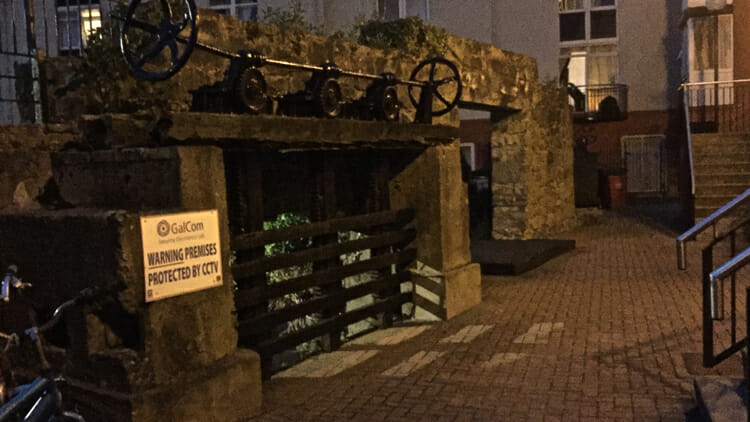 Small locks on the little canal system in Galway established specifically for managing water flow for the many mills.

Crossing O'Brien's Bridge we peeked through a window to see an enormous water wheel for driving the flour mill that had been in the building originally. We went inside for a better look at the wheel and learned that they have engineers working on getting it moving again. The Il Vicolo restaurant serves Italian food and is really quite a special spot. If you're standing at the river and Quay Street, look up the river for the red wheel and you'll know how to find it. 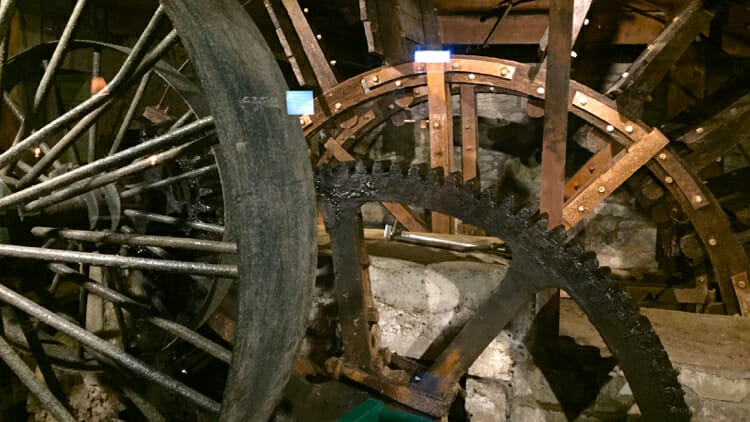 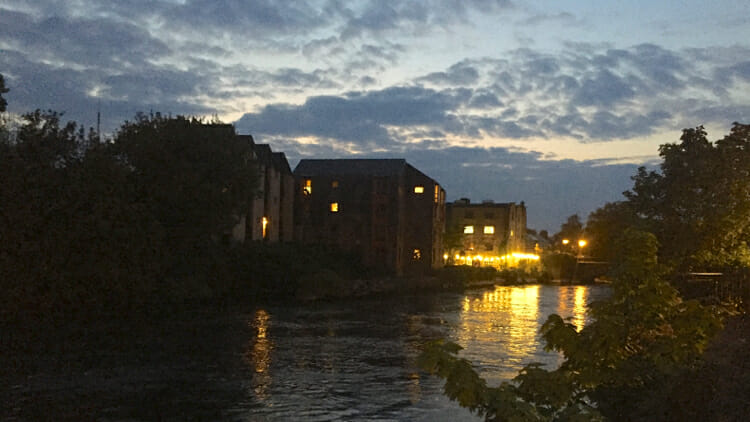 I had told Eugene that I wanted to go to a local pub so we then went down Donnelly Street to the E Brun Bar, a real local place that has music Friday and Saturday nights. Along Donnelly Street he pointed out a driveway with a slanted rock on either side. Such small, wonderful details! These were to protect the walls of the building. Should a horse and cart take the turn to tightly the wheels would go up the rock and slide down thereby avoiding the wall.

Finally, before parting company, Eugene pointed out a canal with two bridges that rise. This canal helped the Guinness family get to their summer place, Ashford Castle on Lough Corrib.

I believe that it was because I was solo in Galway that this wonderful, impromptu tour happened. So many small details that result from being with another person would likely have interfered with my evening with Eugene.

Now, not everyone will have a Eugene to show them around and, while Eugene's tour was full of personality it was a good thing I had taken a tour with Conor Riordan of Galway Private Tours earlier in the day. Conor has a Master's degree from that National University of Ireland Galway. His interests are Archaeology, History, Political Science and Classics. He pointed out quite different nooks and crannies of the city and had his own great stories to tell.

This trip was sponsored by Tourism Ireland but all opinions are my own. I give them my thanks for the opportunity to travel here. I have loved every minute. 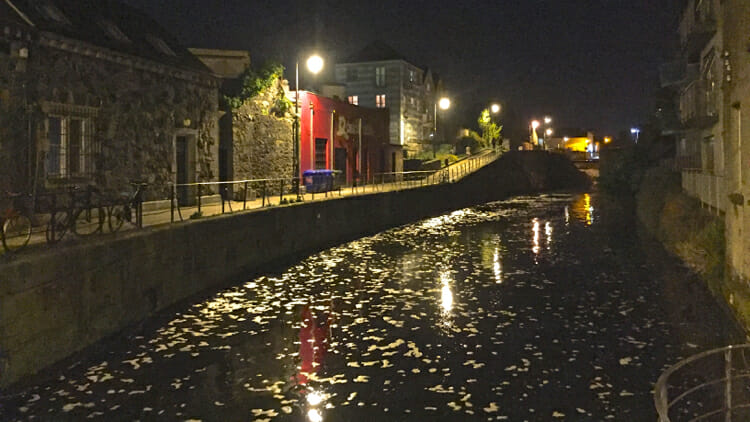 A look up the Eglinton Canal at night.