After spending two days rafting down the Ottawa River (you can read all about that in Whitewater Rafting on the Ottawa River), I was excited to do some solo kayaking on new water: the Madawaska! 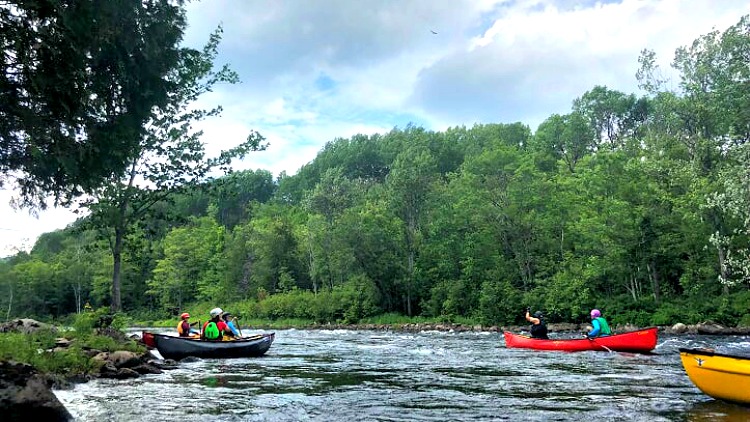 Soon, I would be kayaking down the Madawaska River.

I picked up some beers at the Whitewater Brewing Co. nearby Owl Rafting, then I drove through the forest to the Madawaska Kanu Centre (MKC).

There were more tiny towns along the way getting decorated for the Canada Day holiday and several signs that warned of deer or moose crossings. I was hoping to see a moose as I approached Algonquin Park but I’m glad not to have literally run into one. 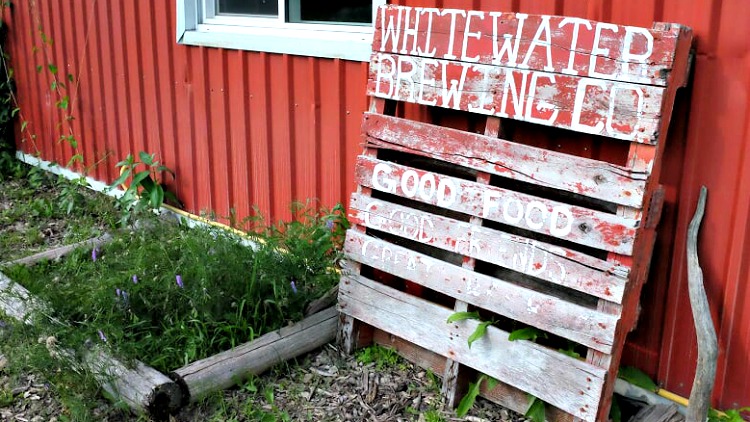 The Whitewater Brewing Co. was started by former instructors at Owl Rafting. I highly recommend the Farmer’s Daughter blonde ale.

Dinner was just ending when I arrived at MKC so I shared a meal and a few beers with the crew before being briefed on my paddling plan for tomorrow. On my walk back to my room after eating, I was greeted by a friendly wild rabbit who munched on leaves within touching distance of me, like in a scene out of a Disney film. This forest appears to be genuinely magical. 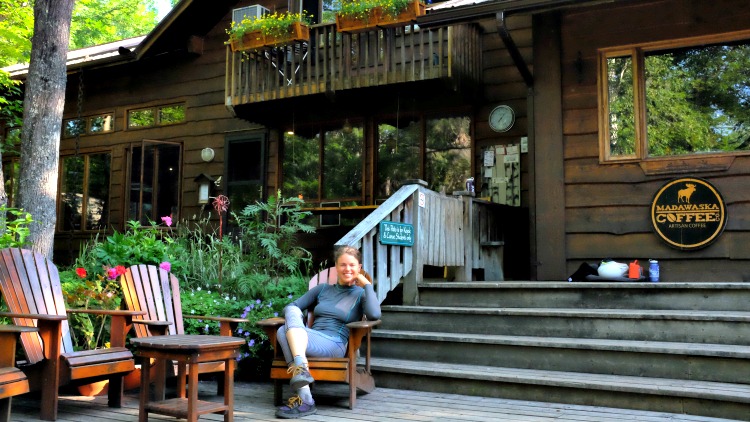 The pretty wooden resort in the forest by the Madawaska.

Much to my surprise in the morning, MKC has a mini cafe in their outdoor store so I was able to get the latte I had been craving for days – a healthy reminder of my intractable urban identity.

For my day of kayaking, I was treated to the accelerated version of the Zero to Hero program where you learn how to paddle on a peaceful bay in the morning and in the afternoon you try to tackle some small rapids.

I’m a history nerd so I wanted to learn a bit about the river I was paddling in. The Madawaska is located on the traditional territory of the Algonquin, the Anishinabek, and the Huron-Wendat, among others. Its name likely derives from an Algonquin band called the Matouwekarini which means “people of the shallows,” a rather fitting name for the activity I was doing.

Back in 1916, the mysterious Group of Seven artist Tom Thomson painted the timber that lumber companies were floating down the river. 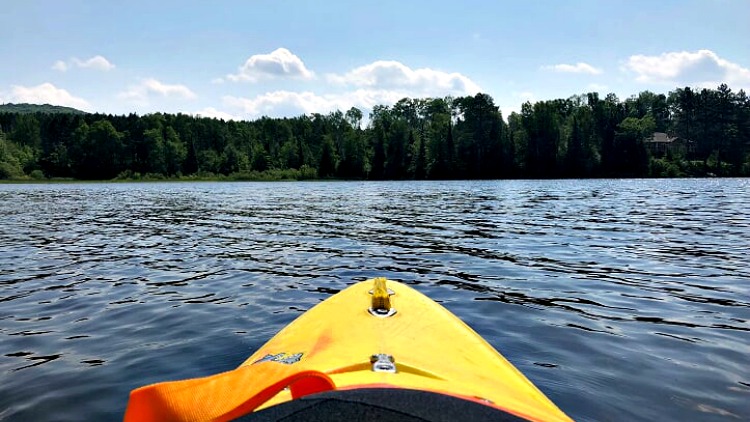 My first time in a kayak in over a year, testing out the Zero to Hero Program.

I hadn’t been in a kayak in over a year and was a little hesitant about the idea of stepping in the wobbly boat. I did find it initially difficult, unable to stop spinning myself in circles. But I quickly relaxed, watching as the other more experienced paddlers also failed to keep in a straight line. Straight lines aren’t all that necessary!

I learned some balancing techniques and how to exit the boat in case it flipped unintentionally (which thankfully did not happen). Then, I just enjoyed myself, gliding through the water lilies as dragonflies landed on my boat. 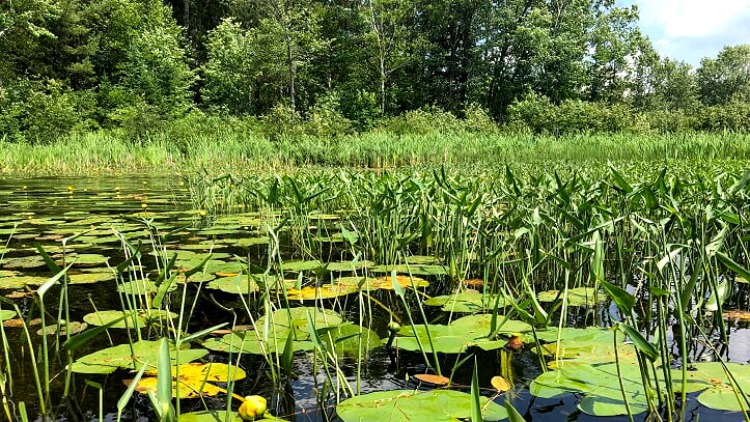 When I felt completely comfortable in the kayak, we stopped for a hearty lunch at the centre. Then, it was off to the entry point at the top of the river where I would finally kayak down whitewater rapids.

I got into the water with my boat and we paddled up to our first small rapid. I pivoted upstream and kayaked into the gushing water – and it was fun! No tipping or falling out of the boat to worry about.

After I had practiced enough on this rapid, we paddled downstream and tackled a few others. They were fun and fast. They were certainly not rapids the size of the ones I had rafted down at Owl Rafting, but I would have needed much more training and courage to handle those. 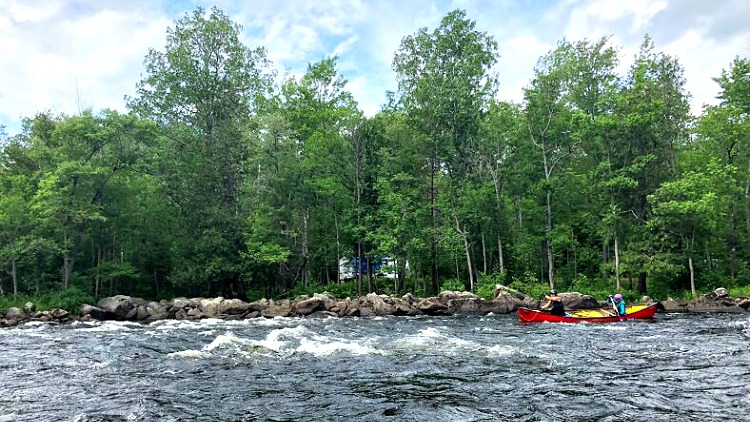 I’m a novice kayaker but still I got to paddle through whitewater.

The canoers who joined me on the Madawaska were very talented on the water, climbing up the rapids with their boats as has been done for hundreds of years on this river.

MKC has devised a Canadian Canoe Route program which combines paddling with other cultural activities, teaching the joy and history of the canoe. They will offer the route, which starts and ends in Ottawa, beginning in 2019. Sounds like a good reason for another visit to this magical place!

Thank you to OWL Rafting, Madawaska Kanu Centre, and Destination Ontario for sponsoring this trip. Solo Traveler maintains full editorial control over all content on this site.

This post is part of a series of weekend trips we are taking in Ontario this summer. You may also enjoy Bettine’s post, Adventures in Glamping: Georgian Bay, Ontario and Janice's post, Bike Ontario: Rail Trails Make it Easy.