You are here: Home / How to Travel Alone / A Solo Point of View / Kissed By the Blues 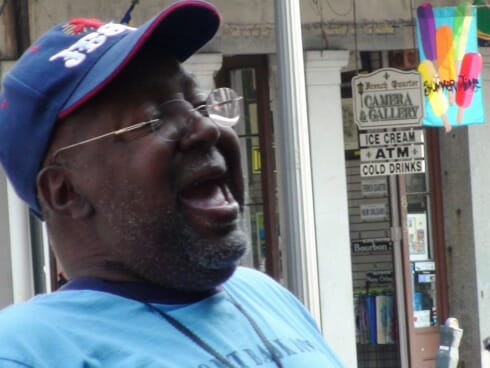 Like a kiss, the Blues can be gentle and sweet or wild and passionate. On this trip, I’ve been kissed both ways by the Blues.

What do I know about the blues? Not a whole lot. I know the majors like Sonny Terry & Brownie McGhee – my brother introduced me to them as a teenager. Buddy Guy – my husband and I saw him in Atlanta. And of course, BB King – he actually did kiss me. But that part of the story comes later.

The fact is, I don’t know a lot but, when it comes to the Blues, you don’t need to know it; you just need to feel it.

This trip has a blues theme. After all, I started in Chicago and I’m traveling down the Blues Highway to New Orleans. I’ve wanted to take this trip for many years now.

Why? I keep asking myself this question. The only answer I can offer is that there is a magical quality to the blues. A mythology around its origins. A simplicity that invites anyone interested to enter and enjoy.

And just like the Blues’ 12 bar progression has a certain predictability, so does life. And as the tunes share common themes, so do we all. We all live, love, grieve, experience joy and heartbreak. I don’t know any other form of music so pure. I guess I was looking for the heart of the blues.

Solo Is Not Blue

Many of the people I’ve met on this trip have been surprised by my choice to travel solo. They suspect that I’m lonely and sad. But I’m not. Oh, I’ve been those things. I’ve been blue. I’ve sung the blues (though no one would want to hear). But the irony of the blues is that it’s uplifting.

As I’ve traveled down the Blues Highway, I’ve sought out the best blues I could find. Eddie Shaw at Kingston Mines in Chicago and the house band at BB King’s in Memphis were great. I really enjoyed Jeff Greenberg at Jimbeaux’s in New Orleans. But for me, the best was in Jackson, Mississippi at 930 Blues Café. There I thrilled to Jackson’s blues sweetheart, Jackie Bell – a stunning singer and an equally amazing performer – and all blues.

At 930 Blues I met Hebert, Isaac the club owner, and Marvin who works security. As a single woman, I felt wonderfully safe and happy in a local Juke Joint all night long. Even as I stepped into the cab to go back to my hotel, Marvin looked right at the driver and said: “you take care of my friend, y’hear.” Safe. Totally safe.

BB, the King of the Blues

I guess I really fell in the love with the blues the night my husband and I went to a small club under the boardwalk in Redondo Beach, California. That boardwalk, along with the club, is long gone but not my memory of seeing BB there. The venue was small and somewhat sophisticated as I remember. Cabaret style. BB played long sets. At one point a string broke on his guitar and he continued to play as he restrung it. And, later in the evening, he offered the women pins of his famed guitar Lucille.

Shy as I was back then, I was the last woman to make my way forward to get a pin. He looked at me. He had no more. So he leaned in and kissed me on my left cheek.

Oh yes, I’ve been kissed by the blues.