You are here: Home / Solo Travel Destinations / Europe / Hungary / From Bleak to Breathtaking: Budapest 30 Years On 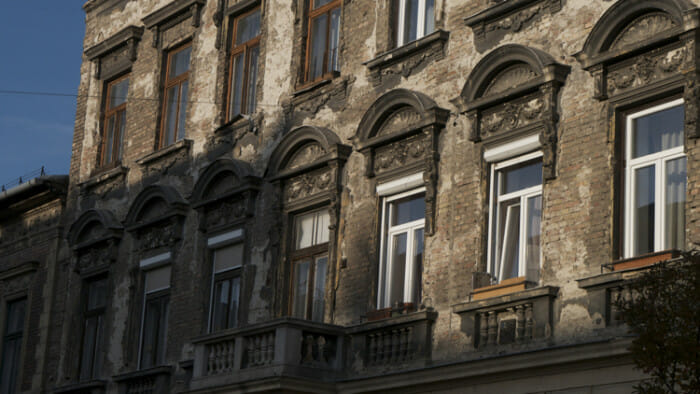 Budapest is still cleaning the soot from the bombing it took late in the World War II which destroyed 80% of the city. Thirty years ago, when I was last there, I'm sure much more of the city's buildings were the dark grey of the building above.

I first traveled solo to Budapest in 1985 and my overwhelming memory is of a weighty grey.

Was the weather poor when I was there?

But there were soldiers in the streets with machine guns. The people's faces were stone cold. I stayed in a tiny Soviet apartment block of grey cement. And the buildings that still stood from the city's days as the “Pearl of the Danube” were mostly covered in soot.

This was Hungary under Soviet control. Considered at the time to be the most western of the countries behind the Iron Curtain, it was not welcoming to tourists. I had to find the police station and register where I was staying – an intimidating task. The stores were almost empty of products – there were many clerks but little to sell. The spas, for which the city is famous, seemed to be the only relief.

I went to Budapest in 1985 because I wanted to peek behind the “iron curtain”.  It was a weird and challenging trip. You can read about it here.

Thirty years and a few months later I returned as part of a Grand Circle river cruise from the Black Sea to Budapest and found a city bustling with energy, engaged people, pop culture, full shops, great food… and light. 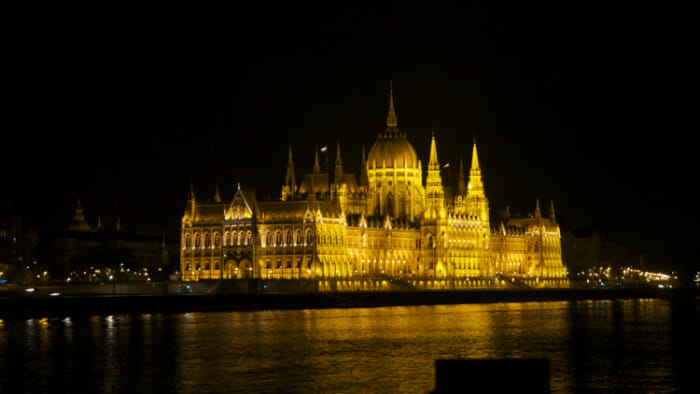 Like many buildings along the Danube in Budapest, the Hungarian Parliament buildings are lit up at night.

There's a great Bohemian scene in Budapest. According to the Guardian it's found in the 8th district. But I found some of it in the 7th district by chance.

After taking a tour of the Jewish Quarter that was arranged by Grand Circle, I broke away from the group and returned to the Great Synagogue where a sound check was underway for the evening's tribute concert to Leonard Cohen – a favorite of mine. I know the lyrics to most of his songs which is fortunate since they were being performed in Hungarian for the concert. The acoustics of the Great Synagogue were perfect for Cohen's poetry.

From there I simply wandered – as I often do. I look up and down streets for signs of something different and interesting. I often find something that catches my eye as I did this time on Kazinczy Street. 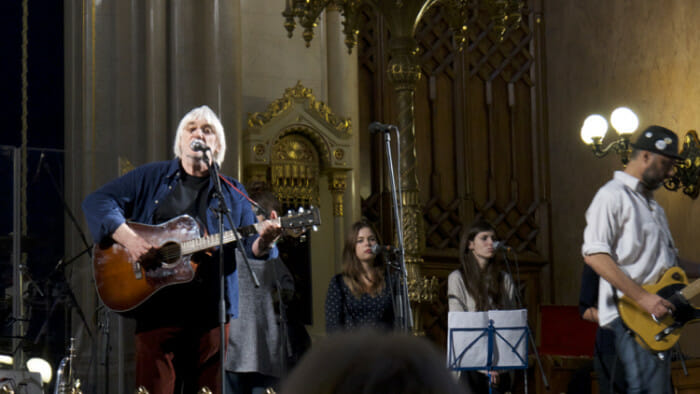 Sound check for a Leonard Cohen tribute concert in the Great Synagogue. 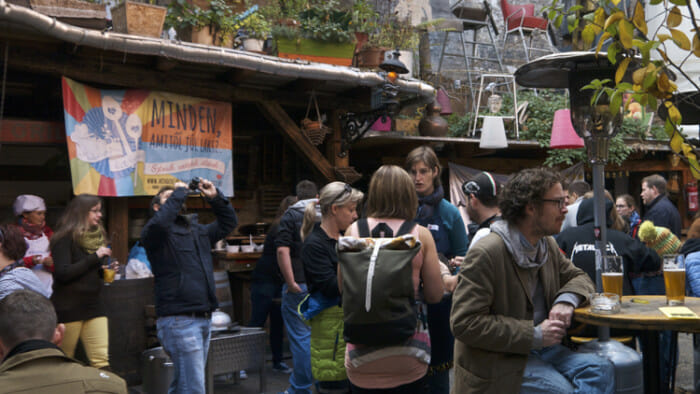 The Zsimpla Kertmozi is a food market, coffee shop, garden and bar. It offers a meeting place during the day and performances at night and would be a very cool find in New York City. 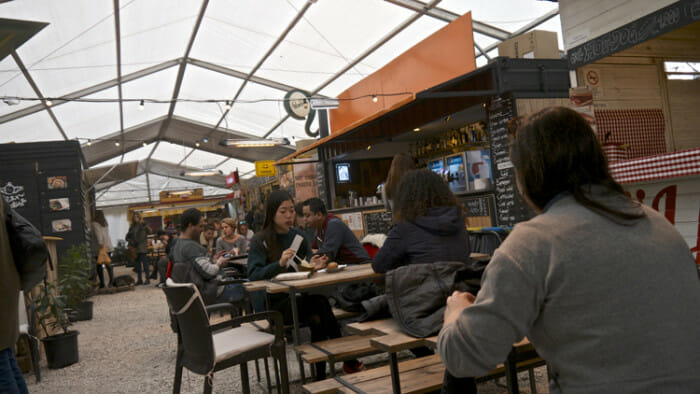 Karavan is lane of food trucks created on an empty lot on Kazinczy Street.

Solo Travel Budapest for Beautiful Buildings and a Dark Past

Budapest is known for its spectacular architecture from the 19th century when it was part of the Austro-Hungarian Empire. On the side of the Nazis in World War II it almost escaped damage until the siege by the Russians late in 1944. The battles that ensued destroyed 80% of the city. As you will see below, Hungary has restored much of the city and continues to do so. It's also in no rush to forget the horrors of the fascist and communist regimes the country endured. 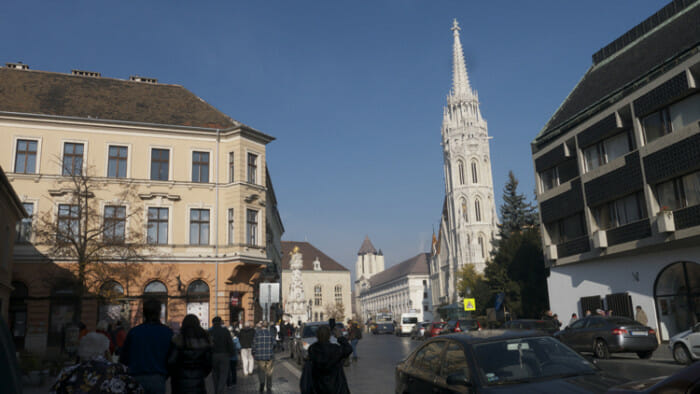 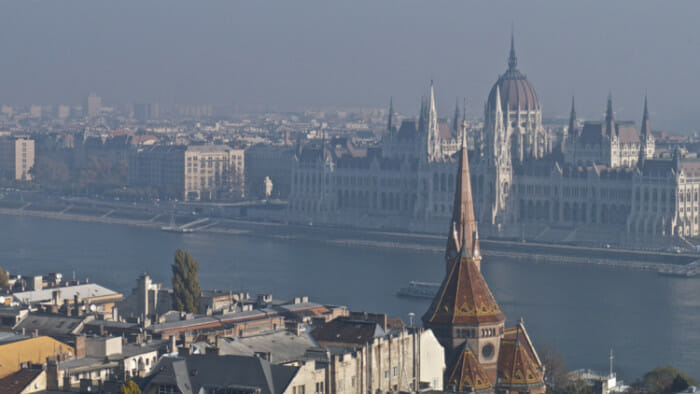 The Hungarian Parliament, considered by many to be the most beautiful parliament buildings in the world, by day. 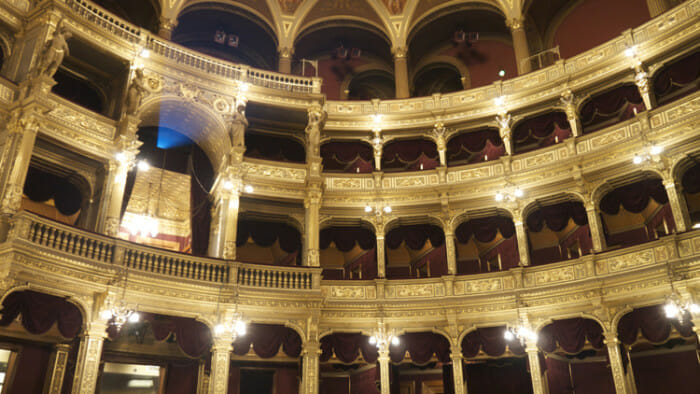 The Hungarian State Opera House. It was worth the small price for the tour. I just wish I'd had the time to attend a performance at night. 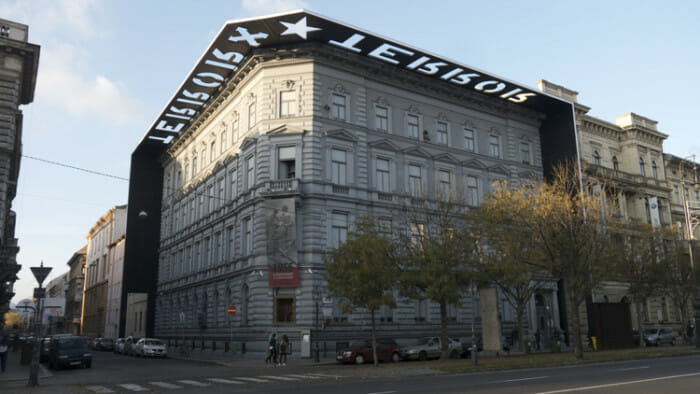 The House of Terror reveals the darker side of Hungary's past. The museum shows the horrors of the fascist and communist regimes the country endured.

The Tree of Life in the Raoul Wallenberg Memorial Park behind the Great Synagogue resembles a weeping willow and has the names of victims of the Holocaust engraved on the leaves. 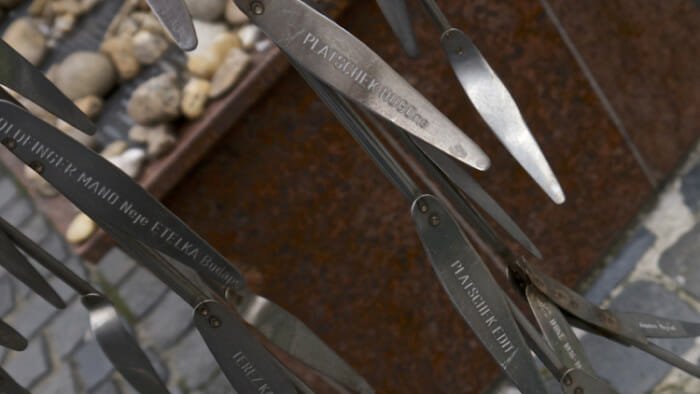 I will end with this photo for it points to individuals who suffered. When atrocities are being discussed it is easy to think in terms of categories of people rather than individuals. Travel helps us see the individual in the global stories. Please read Two Powerful Concepts for the “Why” of Travel.

My thanks to Grand Circle Cruise Lines for supporting this trip. As always, the opinions are my own and editorial control of the stories is managed solely by Solo Traveler. You can read more about this trip here:

Life on a River Cruise? Here’s what it’s like.
My Eastern European River Cruise: Itinerary in Photos
Eastern Europe: 6 Reasons I’m Excited to Go and 1 Reason I’m Not
No Food Left Behind: Staying Healthy on a Cruise