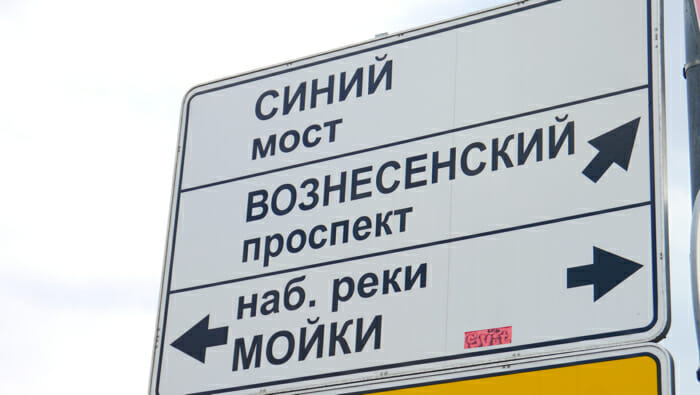 When language is a major issues, a tour guide is a big help.

On flights by airlines such as United or Air Canada or British Airways, it's no longer common for passengers to clap when a plane touches down. But when my flight with Rossia Airlines landed softly in St. Petersburg there was an eruption of applause.

Yes, we had made it.

One soft landing behind me. Two more to go.

I didn't know what to expect in Russia. By the news and comments from people who had been, it seemed that I’d have to be on my guard more than usual. I'd heard stories of demonstrations, corruption and bribery. “Just slip them a few Euros and you'll be fine,” I was told. What? Me? How would I know how to do this?  What if I did it at the wrong time or the wrong way? I wasn't exactly anxious but I was a bit nervous – until a plan was hatched in Italy. 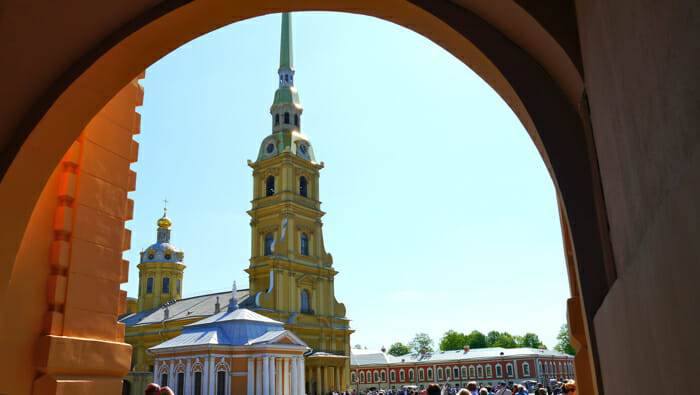 Entering the Peter and Paul Fortress - the original St. Petersburg.

In April I was in Umbria speaking at a conference where I met with some people from Intrepid Travel. Word is that their trips are great. One of our readers shared her experience in Morocco here. But I wasn't looking for a trip – at least not a multi-day trip. What I wanted was a day tour of some sort to help me enter the city – a soft landing if you will. They told me about their  sister company, Urban Adventures, and I could see that they are perfect for solo travelers.

Urban Adventures offers over 250 trips in 100 cities, ranging in length from 2 hours to a full day – including trips in St. Petersburg and Moscow. And they have a special promotion for bookings made in June so it seemed like a perfect fit. I would:

When I arrived in St. Petersburg it was late Saturday afternoon so I didn't do much. I just relaxed. But the next morning I was up early and met my Urban Adventures tour guide, Marina, at 10am. We took the trolley bus (21 rubles) down Nevsky Prospekt into the heart of the city. This was a walking tour and walk we did.

Standing outside the Hermitage she explained how the five building complex evolved over the centuries. Then, walking around the Hermitage, we crossed the bridge and passed the original stock exchange on route to the Peter and Paul Fortress that you see above. 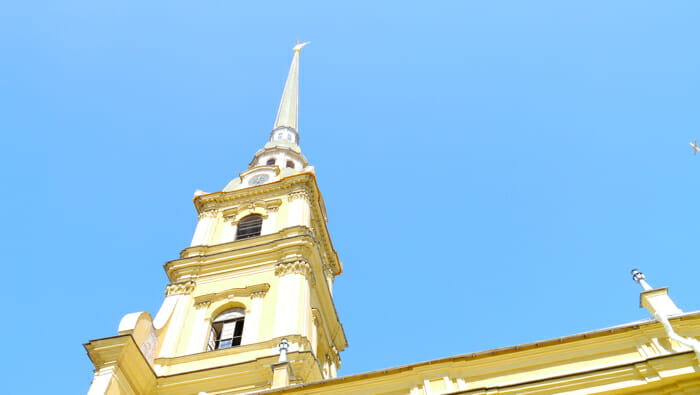 The spire of Peter and Paul Cathedral.

The Peter and Paul Fortress was the first part of this planned city built by Peter the Great. Having traveled Europe he was enamoured with all things western. The Peter and Paul Cathedral above (started in 1712) was the first church in Russia to have a spire rather than the traditional onion-shaped domes. In addition to being the historic centre of St. Petersburg, the Fortress provides a park-like setting for visitors to stroll and enjoy.

From the Fortress we crossed the bridge again and came to the Church of the Bleeding Heart, quite the opposite in design to the Peter and Paul Cathedral. The interior of this elaborate church is done completely in mosaics – a stunning achievement.  Our tour continued back to Nevsky Prospekt then across to St. Isaacs Cathedral. In three hours we covered the entire center of the city, three hundreds years of history and I had learned much about my guide's day-to-day life as well. 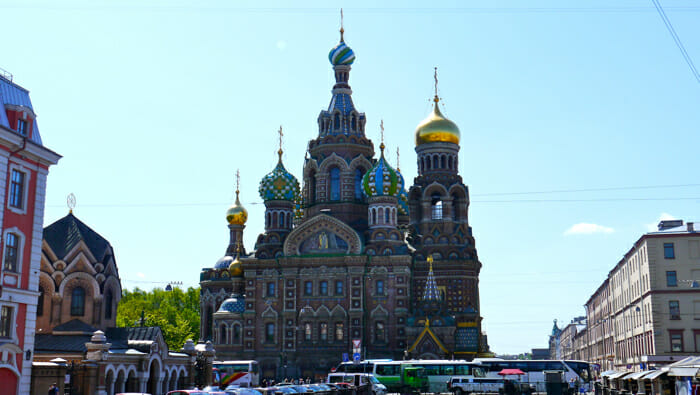 Church of the Bleeding Heart. 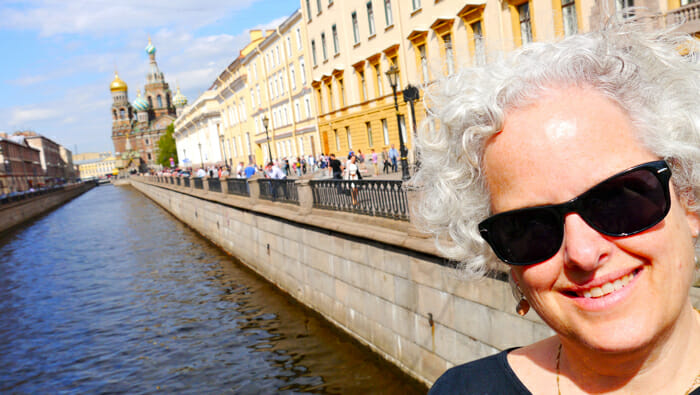 On one of the many canals in St. Petersburg - the Venice of the North.

A few days later, I traveled from St. Patersburg to Moscow on an overnight train which left at 11:30pm and arrived at 8am. The primary sights for Moscow are self-evident: Red Square and the Kremlin. So when I was choosing which tour to take in Moscow I chose the “Moscow Bunker and Underground Tour”.

I walked from my hostel to Red Square and then spent the day walking around the Kremlin. Ten, fifteen kilometres? At least. So when it was time for my evening tour of the bunkers and  underground I was already quite tired. No problem, Olga was my guide and she was wonderful. Her enthusiasm and openness were contagious. She is as curious about the world as I, so we went back and forth exploring the meaning of this and that all evening. 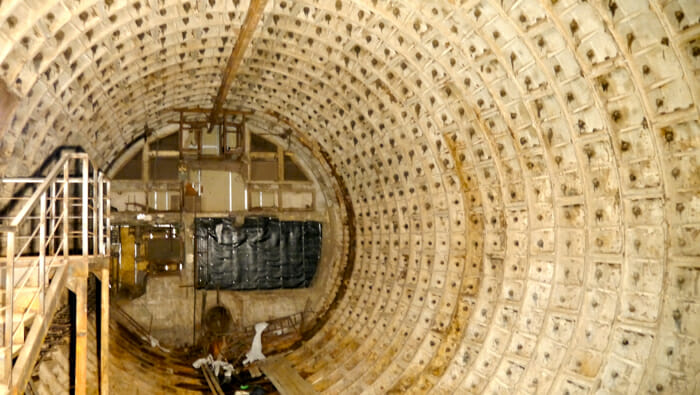 Part of the Moscow Bunker and Underground Tour

While we took the Metro to the Bunker Tour, we did not dwell on it until later. We had a 7pm sharp tour time. This is not something that is flexible so we headed right there to make it on time.

The “Underground Command Post Tagansky” is located in central Moscow. Built in 1951, at the height of the Cold War, its entrance is a very nondescript building that  you would, in any other circumstances, walk right by. This of course, is the idea. It was top secret and none of the people working there were allowed to reveal what they did all day.

Once inside the building, you enter the bunker through a 6-ton concrete door. On the other side of the door is a narrow set of stairs which go down 22 flights – narrow and far enough that I got dizzy – into the bunker system. While there are tours in English, I wasn't able to get one so my guide provided simultaneous translation. This private museum does a decent job of sharing a balanced perspective of the Cold War. 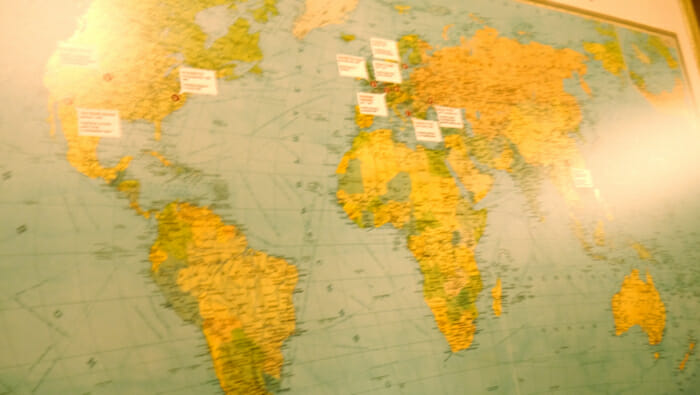 White stickers point to major bunkers around the world.

After the bunker tour we went back to the Metro for another kind of underground experience. We traveled from station to station, jumping off to see  how each was designed differently to accomplish different purposes. You can learn more about the metro in The Moscow Metro and Beautiful Propaganda. 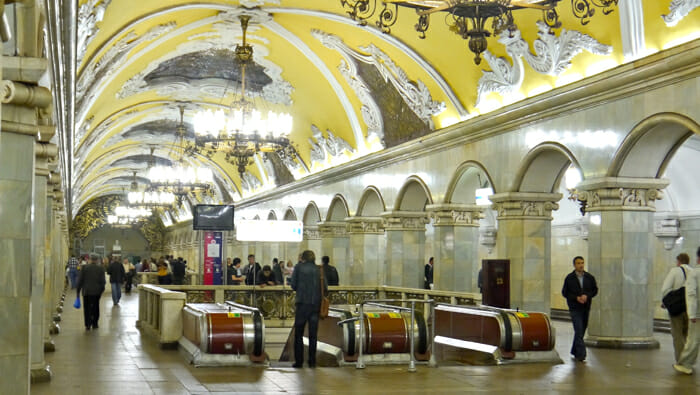 The “Little Bit of Adventure” Deals

Urban Adventures
If you're planning a trip this year and would like to tack an Urban Adventure onto it, why not book this month. They're offering a buy one, get one FREE deal. If, like I did, you're going to more than one city, this is a great deal.

Short Breaks
Intrepid Travel also offer Short Break Adventures – ‘tailor made’ holidays for independent travelers ranging from 2-8 days, they're the perfect add-ons to longer trips or mini adventures in their own right. For solo travelers, they're offering the first trip at the regular price and 30% off their 2nd trip.

To take advantage of these deals, book in June and experience them by December 15th, 2012. Click on this link. The first 8 colorful bars are different types of short breaks. Scroll down to the bottom and click on the blue bar for the Urban adventures.