We are pleased to present a new Solo Travel Destination Post from Harry, a member of the Solo Travel Society on Facebook. Harry is from Canada, and submitted the following report about his quick trip to Brussels, Belgium. Do you have a solo travel destination that you would like to recommend? Submit your description here, along with a few photos, and share it with fellow travelers!

Solo travel rating: 1.5 (1 is easiest, 3 is most difficult. Please see chart below) 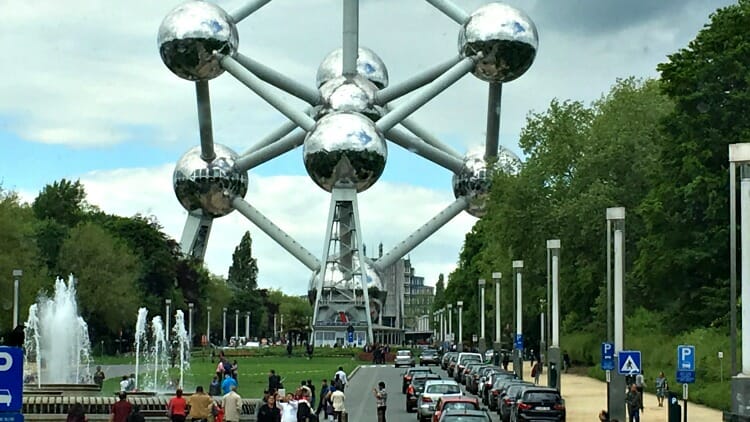 This is what the future looked like to engineer André Waterkeyn and architects André and Jean Polak in 1958 when they built this 102 m tall building for Brussels’ 1958 World’s Fair.

Brussels as the gateway to Europe? Most people think of Amsterdam, London, Paris, or Frankfurt as gateways to travel throughout Europe but Brussels can be a better choice for several reasons.

First, Brussels Airlines flies direct from Toronto, New York, and Washington, DC. Typically, I fly into one of the other main airports with more recognizable airlines. However, this time I flew with Brussels Airlines and found the check-in, the six inches of extra leg room on their Airbus 330-200/300 (invaluable to someone 6’1”), the food quality, and the service excellent.

Flying into a major, yet less known, international airport also has benefits. This is a modern airport yet with faster and more efficient security and border control. The border control officers during my arrival were serious but not solemn and the time from start to finish was less than 10 minutes. On my return flight, none of us had to wait more than five minutes to go through security because of the excellent use of space and personnel.

I took an extra day at the end of my trip to enjoy Brussels itself. It happened to be the date of their annual Pride Parade, so the city was packed with people from around the world.

Brussels is the Capital of Europe housing the Parliament, the European Commission, and the headquarters of over 1,700 international organizations. There are 100 museums, large and small. It has many parks, waterways, 19th century buildings in the Art Nouveau style (the largest collection of any city), and modern buildings like those found in most cities these days.

Traveling on a double-decker bus (25 Euros for two distinct tours lasting an hour each) one can see the old, the new, the Parliament, and the Palace and many other views of the city. I was amazed by the size of Brussels. I had presumed a much smaller city but its 162 square kilometers allows for days of exploring and history, nature, and art lovers will all find things to do. Whether visiting large cathedrals/churches (it is Europe after all) or sipping a drink at one of the hundreds of outdoor cafes, it is a beautiful city in which to spend some time.

I had a wonderful chicken crepe for 9 Euros in a mostly Muslim restaurant called Cappuccino Brussel at Avenue de Stalingrad 71, near my hotel. I stayed at the Bedford Hotel and Congress Centre at Rue du Midi 135. A single room was $105 per night and within walking distance of the train station, bus tours, and the famous Manneken Pis (little pee man in Flemish), the 1600s bronze sculpture of a little boy urinating that has been sketched, painted, and now photographed by millions of people. I have no idea why this little guy is so popular but the crowds around him were incredible. He’s dressed in local soccer uniform this year!

In front of the bronze statue of Manneken Pis, a naked little boy urinating into a fountain basin, designed by Hiëronymus Duquesnoy the Elder and put in place in 1618 or 1619.