I am pleased to present a new Solo Travel Destination Post from Gail, a member of the Solo Travel Society on Facebook. Gail is from the United States, and submitted the following report about her trip to Granada, Spain. Do you have a solo travel destination that you would like to recommend? Submit your description here, along with a few photos, and share it with fellow travelers!

Solo Travel Rating: 1 (1 is easiest, 3 is most difficult. Please see chart below) 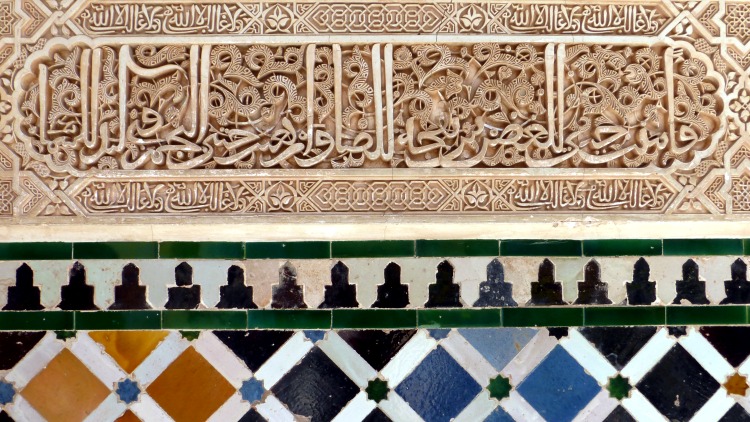 The main reason to go to Granada is the Alhambra and Generalife (both are UNESCO World Heritage sites).  You need to buy tickets in advance; I bought tickets for two days.  I thought about doing a tour, but ended up buying individual tickets for myself, which I think may be the best choice.  The big advantage of buying single tickets is that you can go through things at your own pace – you have all day.  This means that you can take hours to go through the Nasrid Palace and soak it up.  As the tour groups flow past, there are brief gaps with few tourists.  There are plenty of books available for brushing up on the history before going.  I would have liked more information about the water aqueduct and hydraulic technology used for the gardens, though.  (You can buy tickets directly from Alhambra's website three months in advance.)

I rarely get excited about food when traveling.  I'm lactose intolerant, so in many places, I have to be really careful, and I end up eating nuts, fruits, and bread mostly.  But in Granada, shawarma, kebab, tagines, and paella were readily available, so I chowed down!  Paellas came with a wide range of things in them – squid, octopus, shrimp, small crab, mussels, chicken, and pork.  Some restaurants even had rabbit, which I don't think I have ever seen on a restaurant menu ever before.  Good fresh fruit was available for carrying around as a daytime snack, but you needed to buy it in town and carry it with you.

Other Sights of Interest

I bought the Granada Card and visited 17 of the 18 things on it (plus a few places not on it).  Many of the places are small and near each other, so the visits were quick and one can see 5 or 6 sights in a day.  I enjoyed the old houses, but after awhile, they started to all look alike.  Some had exhibits in them. The Palacio dar al-Horra was my favorite, with astrolabes and solar quadrants. Casa del Chapiz had a nice garden and good views.  I toured the Abadia, Cartuja, & San Jeronimo monasteries, as well as the big main cathedral and the Capilla Real. I found the crucifixion statues version of Christianity to be heavy-handed, but the architecture was richly decorated and the monasteries much more lavish than I expected.

I hadn't planned to do any hiking as I hadn't realized how much there was available before planning my trip.  The park on top of Sabika Hill had excellent hiking.  I stayed on the major, nicely graded paths.  I was tempted to do the real hiking paths, but really wasn't prepared, and I ran out of time.

Walk!  Granada was quite pedestrian-friendly.  The older historic areas have narrow streets, and are steep, sometimes with steps.  The drivers were respectful.  The pedestrians kept their eyes and ears peeled for cars.  The narrow streets required flattening yourself up against a building to let the cars go past.  I did ride the city buses a few times.  The driver has an actual cash register!  They can make change for a 20 Euro bill if need be.  I had free bus tickets from my Granada card purchase, so this was not an issue for me.  Being from New York City, I thought the buses were pleasant – the frisky mini buses too cute – and I nearly missed my stop because we got there so fast!  I gave up on bus maps entirely.  After being in Granada a couple days, I learned the names of local streets and neighborhoods, and found that just reading the bus stop lists was sufficient to get to my destination.  But really, you can walk to everything, this town is quite small and compact.  I relied on Google Maps and my phone's GPS to prevent getting lost.  The tight tangle of streets in the Albaicin neighborhood can be quite challenging to your sense of direction.

It's worth it to learn a little Spanish.  English-speakers are readily available, no problem.  But speaking Spanish was expected.  I don't speak Spanish beyond basic words and phrases, but I gave it a try and it worked.  If I really needed to have a discussion, like buying books at the Alhambra bookstore, speaking English was no problem.

I had a fantastic trip.  People were very nice, considerate, and aware of how they impact others.  Okay, some tourists up at the Alhambra were not as nice, but around town, people were great.  I felt really safe.  (I'm not a night owl, so I don't know about night-time adventuring.)

Be prepared for hot and sunny weather! 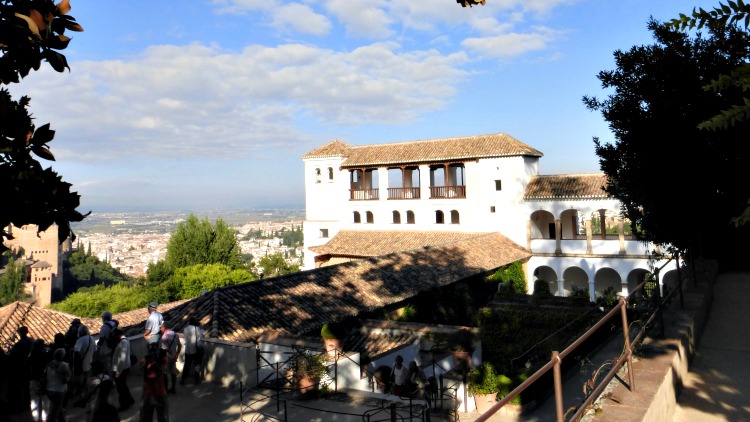 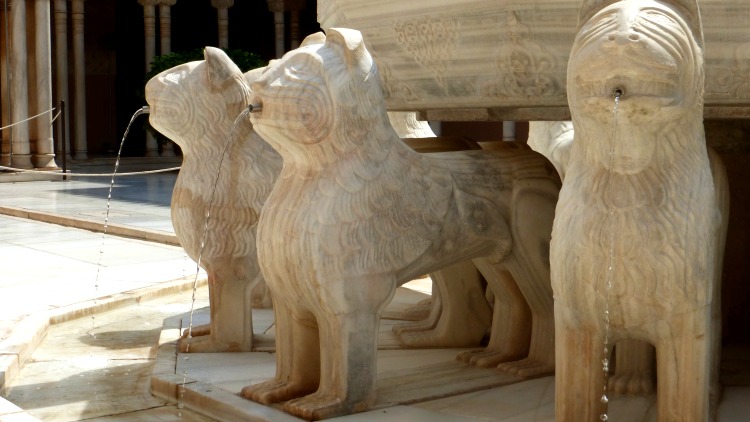