We are pleased to present a new Solo Travel Destination Post from Emily, a member of the Solo Travel Society on Facebook. Emily lives in South Africa, and submitted the following report about Iceland. Do you have a solo travel destination that you would like to recommend? Submit your description here, along with a few photos, and share it with fellow travelers! 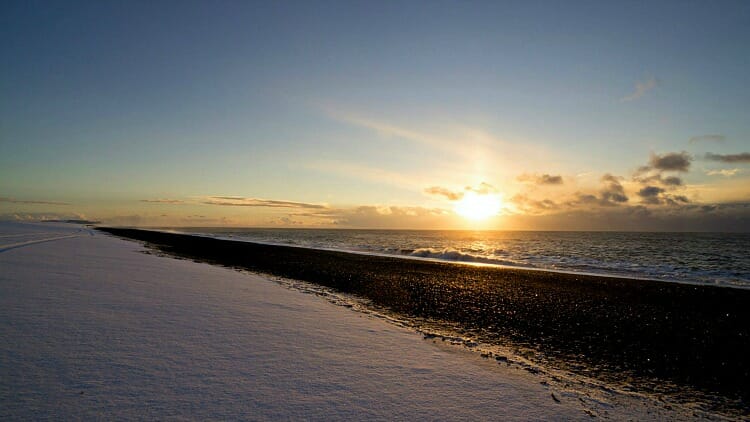 Black Sands beach of Vik, with some snow as frosting!

Reasons to go to Iceland

Just to start off, there’s this word: Rasfeber. It’s a Swedish noun, meaning “The restless race of the traveler's heart before the journey begins. When anxiety and anticipation are tangled together; a ‘travel fever' that can manifest as an illness.”

I have traveled quite a bit but never have I felt the anxiety that I felt before going to Iceland. I literally felt sick. I was actually sitting at the airport and hoping for something to happen that would prevent me from going. I was nervous about a couple of things: going in winter, being alone for Christmas, 18 hours of darkness, the cold, angry volcanos, vampires, and being surrounded by an icy ocean! At the end of the day, none of those fears materialised and it turned out to be one of the best holidays of my life!

I spent most of my time in the capital city of Reykjavik – what a cute and walkable city! On the very first day, I was met up with by locals and shown around. Even though I was dead tired, I got to see some of the city before they went home for Christmas Eve preparations with family.

I experienced my first white Christmas – it was amazing and beautiful. I may have traveled on my own but was blessed to spend the day with some lovely people from Iceland and all over the world.

If there’s another reason to visit Iceland, it’s the capital city’s Police department aka Logreglan. A really awesome bunch of guys and girls, who were contacted by a friend (in Iceland) asking if we could meet them and get a pic – we’re fans of their Instagram account. They went a step further and came to my hotel on Christmas day and gave me a personal tour of their city. They were really sweet and helpful. I felt like a VIP! They don’t even carry guns! So you can imagine how safe the city is to walk around in at all times. The best place for a solo traveler!

The rest of my time in Iceland was spent going on various day trips in and out of the city. Even in winter, with the right vehicle, there is so much to do and see.

We had these Super Jeeps taking us around the country, climbing over rocks, crossing semi-frozen rivers, and off-roading up and down glaciers and snow-covered sand dunes. Zipping across the Black Sands beach of Vik – WOW. The contrast between the black volcanic sands, icy-blue ocean and white snow was unbelievably beautiful. We were involved in some rescues of stranded vehicles in the snow as well. I went snowmobiling on a glacier as well and went on a glacier hike (some muscles were awakened). I finally understand what a glacier is! One can chip off some of the glacial ice (ask a guide first) and ‘eat’ it… the water there is delicious! 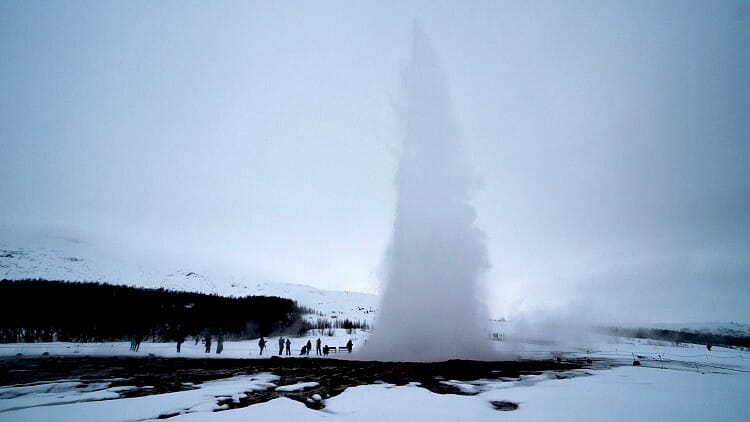 Aside from all the adventurous activities, the various waterfalls are a sight to behold, literally taking my breath away as I stood beneath them! Then there’s the exploding geysers and the various geothermal spots around the country. It’s like waiting for the toaster to pop breakfast, except this is a 100 degrees Celsius, or so, poof of steam/ water. It was amazing! Geysir and Strokkur being some of the more popular ones to see. Geysir was a bit quiet on the day we were there, but Strokkur provided loads of entertainment.

My explorations were mainly on the southern side of Iceland, but I plan on returning in summer and exploring a bit more of the country. There’s also the Blue Lagoon, which is actually formed as a by-product from the geothermal plant which heats up the peoples’ homes – all natural energy. It’s definitely an experience and a good way to relax in between all the adventures around the country. Reykjavik also has many public pools worth visiting, which are open all year and frequented by locals and visitors.

I didn’t run into any vampires (whew!), but had a li’l Yule lad waiting at the hotel for me when I arrived. Icelanders have the cutest Christmas traditions, and other beliefs. Trolls and elves all over the place! Also… I have to add… there are no bugs in Iceland! No reptiles either, so you can wander around the place and explore to your heart’s content without having to worry about running into a sleeping reptile – I’m South African, these are real concerns when exploring the countryside!

So with the late sunrises (+/-11:30 am) and early sunsets (+/-3:30 pm), everyone can leave the country with some beautiful photos of some amazing scenery. Winter in Iceland, with its long night time hours, also means sightings of the beautiful Northern Lights aka Aurora Borealis. You can even see these over the city on a clear night. What a sight they are!

You’d expect Iceland to be cold — I was freezing in Lapland the year before — but it was not too bad. The weather changes quickly, but it's bearable. It was raining the last two days there, and some of the snow turned to ice, so my walks into town and around were a slippery experience. The trick is to think like a penguin and lean slightly forward when walking, change your centre of balance, and you’ll be ok. There’s a saying in Iceland, “If you don’t like the weather, just wait five minutes.” True story. That wind is something else, I suggest carrying lotion with you at all times to keep the dryness at bay.

Saving the best for last… Icelandic horses. Gorgeous furry beasts with glamorous and thick manes that waft around in that crazy Icelandic wind. They’re so friendly, they’ll walk up to you if you approach them – I guess they want food. Take treats with you when going out of town, in case you spot them. Apparently, riding them is quite smooth: you can have a cup of tea while going for a Sunday stroll and you won’t spill a drop. Special cutie-pies. I loved them.

So there, all my fears before traveling to Iceland, laid to rest. Ok, I was kidding about the vampires, but when I heard 18 hours of darkness, that was my first thought.

Never in all my travels have I met people like the ones I met in Iceland. Vikings were really misunderstood sweeties, from the very friendly Logreglan (Police department) to even getting the opportunity to visit the President’s compound. No fences, no security. I’m not saying go walk all over the place – it’s still someone’s home – but the people are so friendly, they will happily show you around if you ask. What an experience! Such open and accepting people.

The landscapes are amazing and will take your breath away. It’s definitely been one of the friendliest and most beautiful places I have ever had the pleasure of visiting, and has now been added to my list of countries that need to be re-visited! You really must go there. 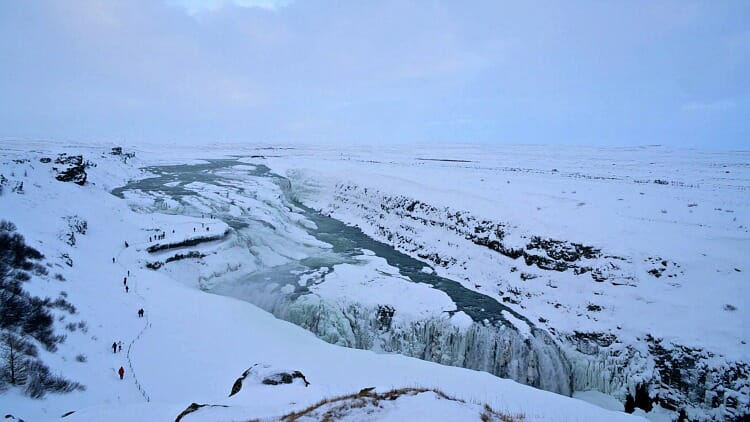 Golden Falls of Iceland, Gullfoss… there are no words.