We are pleased to present a new Solo Travel Destination Post from Ian, a member of the Solo Travel Society on Facebook. Ian is from the UK, and submitted the following report about Ljubljana. Do you have a solo travel destination that you would like to recommend? Submit your description here, along with a few photos, and share it with fellow travelers!

Solo travel rating: 1 (1 is easiest, 4 is most difficult. Please see chart below) 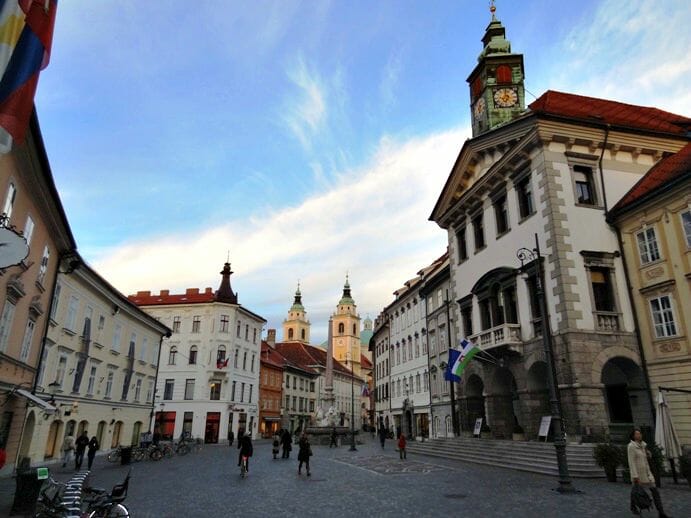 Street cafes on the East Bank.

Ah, Ljubljana … one of the lesser known European capitals (indeed Slovenia is one of the least known European countries). It was formerly an Austro-Hungarian city called Laibach, and is heavily influenced by nearby Italy. It used to be part of Yugoslavia, but Slovenia became the first ex-communist state to join the European Union, and now even uses the Euro as its currency.

My first impressions of the city were that it was quite small as capitals go, but quite pretty and peaceful – one might even say “romantic.” And despite arriving around 9pm in the middle of November, it seemed a very safe place to be walking through in the dark. In a way, it reminded me of Bruges in Belgium – kind of laid-back, a little quirky but definitely understated, just with fewer tourists. I stayed in a stylish backpacker dorm on the South side called the “Sax Bar and Hostel,” where the rooms were decorated to commemorate jazz/soul music legends, complete with vinyl records on the walls – all very hip!

Getting around is pretty easy, and you'd be forgiven for thinking the bicycle is King. The city centre is mostly flat, with fairly straight roads, so it's a very easy place to get around on foot too. The  Ljubljanica River has roads on both sides of it. The West side is a wide promenade close to bars whilst the East side has a French style pedestrian street with cafés and shops. There's also a decent network of buses, and the main railway and coach station is well-signposted on the Northern edge of the city centre, a direct bus or simple walk away.

Although at a crossroads in Europe, culturally Ljubljana felt more Germanic than anything else. This showed itself in the food where, whilst it was perfectly possible to get an excellent pizza, the showpiece restaurants tended to feature sausages. Sokol restaurant serves up dishes like Kranjska – sausage from Carniola, a historic region of Slovenia, with sauerkraut – and is designed with traditional Slovenian decorations. Even the waiters wear national costumes that reminded me a bit of the Austrian traditional outfits, with the frills, the shirts, and the waistcoats.

Bars are pretty common; Ljubljana has quite a youthful, hip feel to it, and the places I ventured into all felt friendly and relaxed. In fact, a couple were so laid back it took about 20 minutes for them to even notice I was there. Anywhere else this would have been angsty but here it was just nice to sit back and watch the world go by. Beatniks might want to visit a bar on the West Bank called ‘Bikofe' (‘Buy Coffee' – see what they did there?), easily identifiable by the Bob Dylan poster in the window and the 20-something poet types smoking outside.

For culture, there are a couple of Slovenia-specific museums that you may wish to visit. One is The Museum of Contemporary History, which provides a whistle-stop tour of 20th Century Slovenia, detailing where Slovenia came from, and how it got independence. It's a little biased and gave me the impression that Slovenia is a bit like a small dog who has to keep barking to get noticed, but it was definitely interesting.

The other is the Museum of Modern Art, which concentrates on 20th Century Slovenian artists. When I went it had a specific installation dedicated to Marko Pogačnik and his OHO movement.  Pogačnik is known for lithopuncture – giving the Earth acupuncture using stone menhirs. One example of this is visible near the railway station – a small park with a series of stone columns in a complex circular pattern. Had it not been November, it's the sort of place I could imagine people holding hands and skipping barefoot through.

The largest park area in Ljubljana though is Tivoli, a large area of hills and woodland on the West side of the city, quite popular with walkers and joggers but large enough to easily get lost in and find your own space. It's almost in the city centre – a short walk beyond the Museum of Contemporary Art – but once you're inside it feels like you're deep in the countryside.

There's also the Castle, set on top of a hill on the East side of the river. Don't worry, there's a cable-car! It's not a ‘castle' as I might know it in the UK, as historically it's been a hospital, an army garrison, and a royal residence. It contains an interactive museum of Slovenian history (covering a larger period than the Contemporary Museum), and a tower from which you get views across the city and quite far beyond.

Finally, Ljubljana has a symbol, and it took watching a film in the castle to find out about it. There is a ‘Dragon Bridge' over the river, so named because it's lined with sculptures of green dragons. Dragons also appear on crests, on a couple of buildings, and indeed, on postcards. Conversely, one of the main venerated saints here is St George.

Ljubljana is a safe, walkable place for solo travelers with lots to see, do, eat, and drink.  The people seemed very friendly and helpful. The city itself isn't that big, but there's enough there to fill 2-3 days, and then you can use it as a base to explore elsewhere in Slovenia. 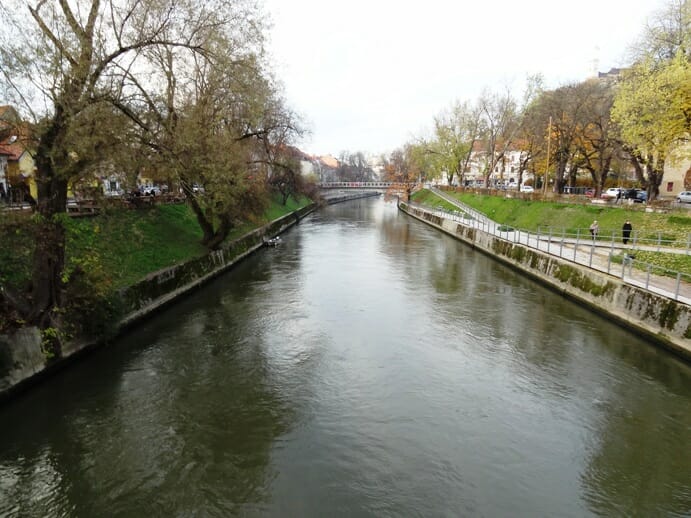 The Triple Bridge over the Ljubljanica River. 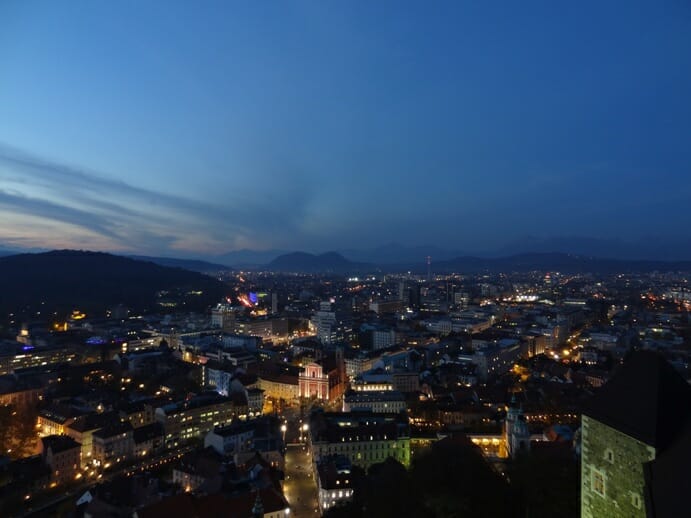 Ljubljana at dusk, from the top of the castle tower.