We are pleased to present a new Solo Travel Destination Post from Judy, a member of the Solo Travel Society on Facebook. Judy is from New Zealand, and submitted the following report about her trip to Meteora. Do you have a solo travel destination that you would like to recommend? Submit your description here, along with a few photos, and share it with fellow travelers!

Solo travel rating: 1.5 (1 is easiest, 3 is most difficult. Please see chart below) 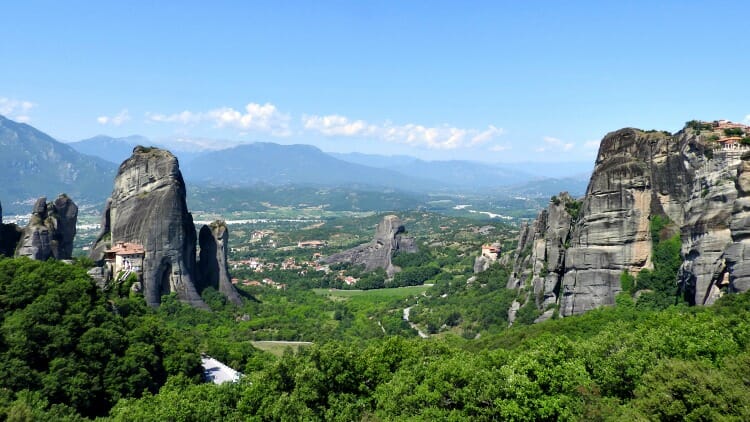 Meteora is one of those ‘bucket list' destinations, and for me it was part of a more extensive Greek holiday in early summer, 2017.  Its massive sandstone rock pillars are unique to Greece and it is a UNESCO World Heritage site.  As if the awe-inspiring scenery wasn't enough, in the 14th Century, monks, needing to protect themselves, built more than 20 monasteries on top of these inaccessible columns.  Six of these remain today, are still in use, and also open to tourists for a small entry fee.

There are two main places to stay in the area: the village of Kastraki and the town of Kalambaka, where I stayed in a guest house right at the base of one of the rocks.  It's easy to reach from Athens by bus or train, if you're relying on public transport.  There are hiking tracks through the whole area, and it's popular with rock climbers too.

If you're traveling by car, you can see as many monasteries as you like.  I took a half-day tour that took us to three: Great Meteoron, Holy Trinity, and St Stephen, the smallest, which is now a convent.

Keep in mind that the entire Meteora area is considered a very holy place to the Greek Orthodox Church.  At the monasteries, women must wear skirts and at some, they must cover their shoulders as well. Men should wear trousers and long sleeved shirts. They do provide wrap skirts for women who travel with shorts or trousers.

As you can imagine, accessing these monasteries on top of rock columns rising hundreds of feet in the air might be challenging. Thankfully, there are paths and steps and they no longer winch you up in a net, but it is still difficult for someone as unfit as I am!  Great Meteoron, for example, reportedly has 360 steps.  In 30+ degrees celsius heat, that was definitely a challenge! First, you climb down into the valley below the road, then up the steps to the monastery. It is cool inside, which was such a relief! There are paintings and icons, and they have set up areas for tourists to see how things were done centuries ago, like the carpentry area and the old kitchen. The church within the monastery is small, but heavily decorated, and there is an air of solemnity there.

The real gift of these places, at least for me, is the stupendous vista from each one.  You see other monasteries, more rock columns, the river valley, plains, hills and the towns below.  A more picturesque place would be very difficult to find.

The next monastery, Holy Trinity, is the one above Kalambaka that I could see as I walked up to my accommodation from town.  This was the least accessible, and I have to admit that when I saw what a massive walk it was, I almost decided to stay at the van. It was indeed tough, but I'm proud to say I did it! I was the last one to get back, but I did arrive in the allotted time.

St. Stephen is the easiest one to get to, as you can reach it via a downhill walk through shady bush. If you take the tour, the driver takes the van to the other entry, so it is also downhill to exit!

I stayed at Kalambaka for two nights, which worked out really well.  Some people only take a day trip from Athens, but that would be a rush, and in my opinion, would not do justice to such an incredible place. 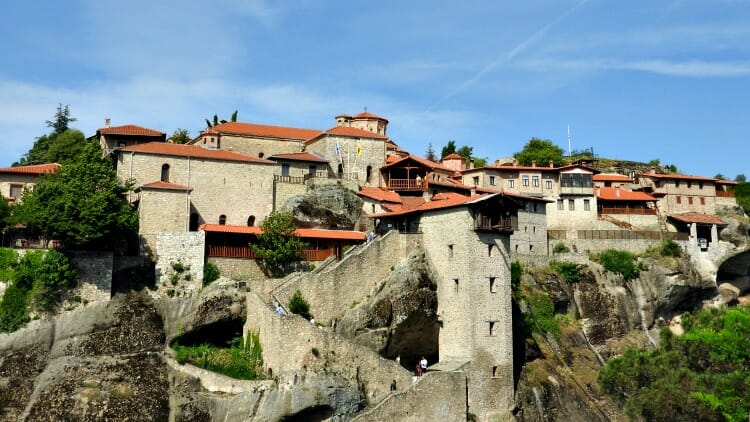 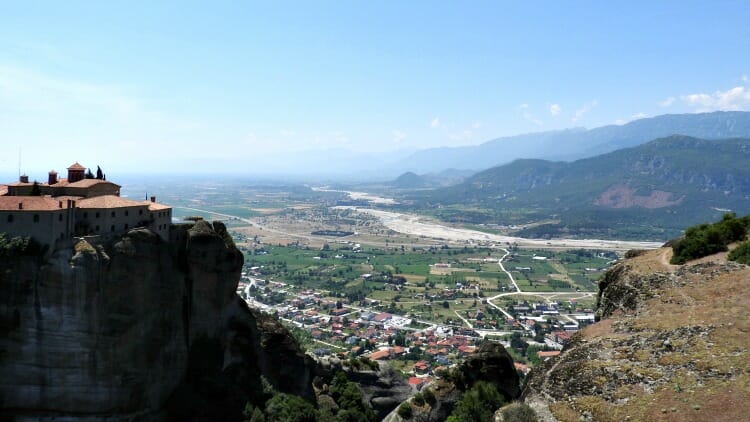 Showing part of Kalambaka and the river valley 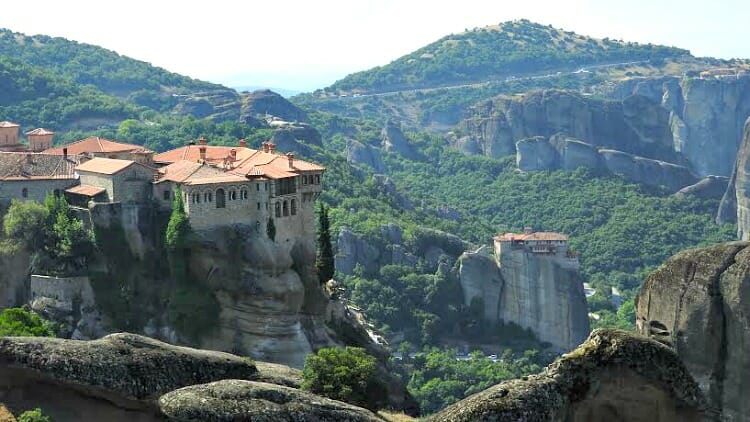 The monasteries are quite close to each other.