We are pleased to present two takes on Vancouver as a Solo Travel Destination, one from Janice and the other from Michelle, members of the Solo Travel Society on Facebook. Both Janice and Michelle are from Canada. Do you have a solo travel destination that you would like to recommend? Submit your description here, along with a few photos, and share it with fellow travelers!

Solo travel rating: 1 (1 is easiest, 4 is most difficult. Please see chart below) 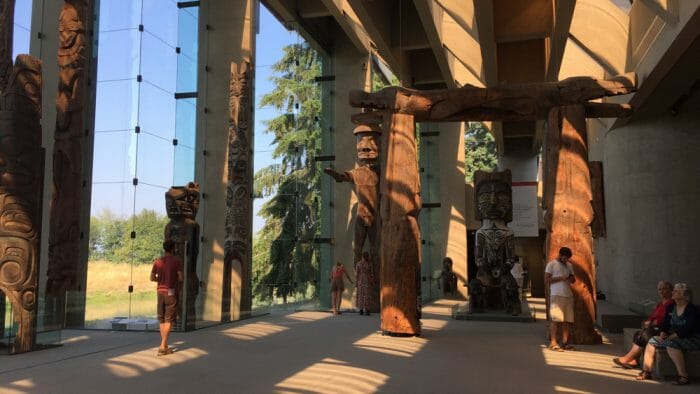 The Great Hall of the Museum of Anthropology is dramatic with 15 meter high ceilings and huge totem poles.

Reasons to go. I've been to Vancouver several times. Read One Day in Vancouver – food, ferries and a walk around the Stanley Park. So, on my most recent trip I did something new. I went to the University of British Columbia (UBC) to spend the day.

Public transit to UBC is easy. One long bus ride from downtown to Point Grey and the university campus will get you there. My first stop was the Museum of Anthropology where I grabbed a bite of lunch in their small cafeteria. The food was fine and the the coffee was great. Then I bought my ticket for the museum. It's $18.

The museum has the world's best collection of Northwest Coast First People’s art housed in a spectacular concrete and glass building designed by Arthur Erikson. It follows the post-and-beam design of family homes of northern Northwest Coast First Nations. The Great Hall displays huge totem poles, feast dishes, bentwood boxes and canoes from the Kwakwaka’wakw, Nisga’a, Gitxsan, Haida, and Coast Salish peoples. Smaller artifacts in gold, silver, argillite, wood, and other materials are exhibited elsewhere in the galleries. Works by contemporary artists are also on display. Take one of the free tours offered as the history and storytelling brings the art alive.

The museum continues outside on the grounds where there are the Haida House and Mortuary House constructed by Haida artist Bill Reid and ‘Namgis artist Doug Cranmer. They are modeled on a 19th century Haida village. 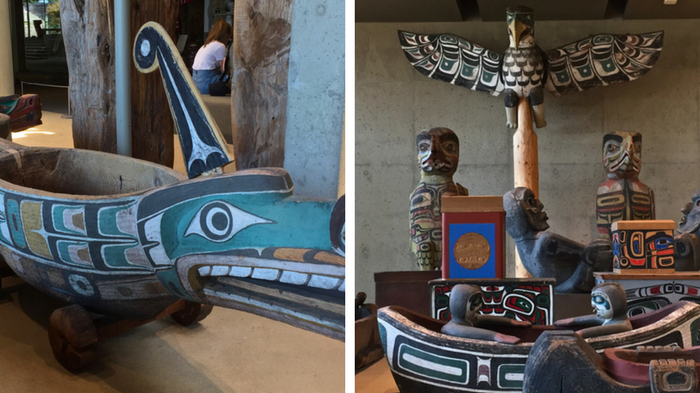 Some of the art and artifacts in The Great Hall. 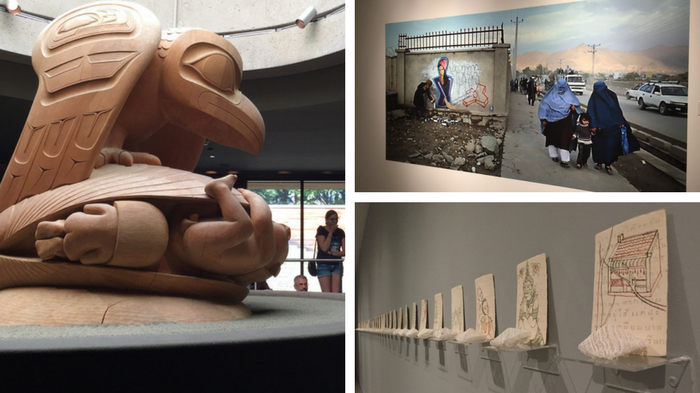 On the left is the “The Raven and the First Men” by Haida artist, Bill Reid. The museum also has temporary installations as shown in the images from a visiting exhibit on the right. 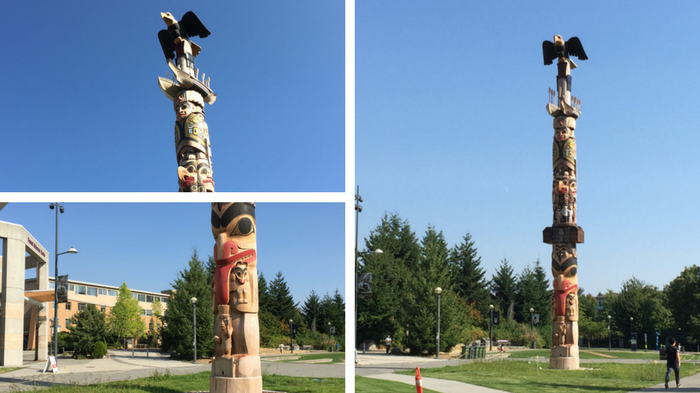 UBC offers more than the Museum of Anthropology. On April 1, 2017 the 55-foot Reconciliation Pole was installed in a traditional Haida manner on the Main Mall of the campus.The Reconciliation Pole shows the history before, during and after Canada's Indian residential schools. 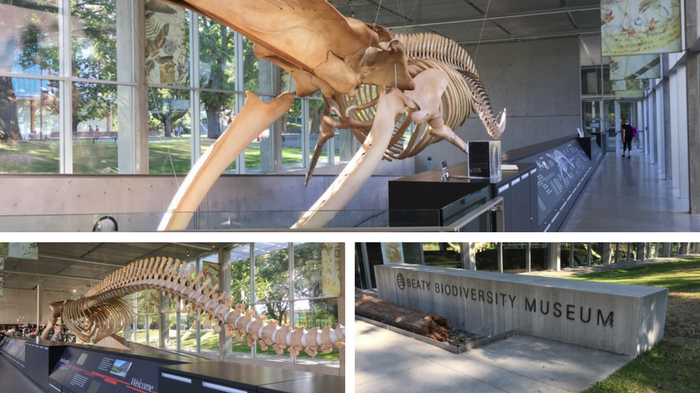 The Beaty Biodiversity Museum is another destination on campus. This natural history museum is located on the Main Mall of UBC. The Marine Invertebrate Collection is probably the most spectacular, especially the 25-metre (82-foot) skeleton of a female blue whale shown above. 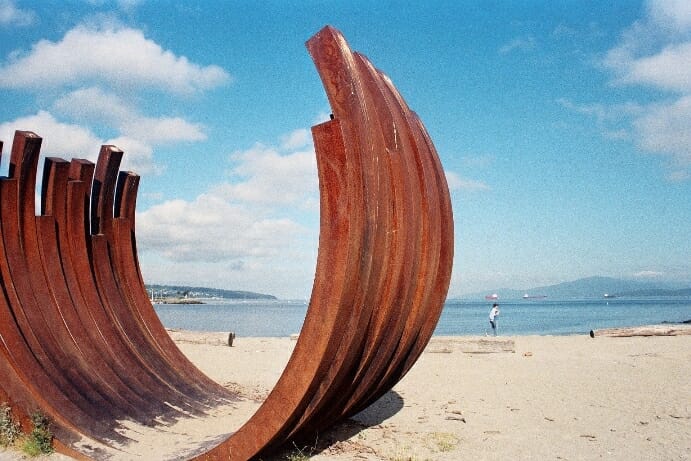 Along the Vancouver Seawall.

Reasons to go:  Vancouver is a uniquely beautiful city. Nestled at the feet of the Coast Mountains and opening out onto the Strait of Georgia, curving towers of steel and glass jut out amongst natural wonders.

As a solo traveler, there's plenty to see and do in Vancouver. Athletic travelers may challenge themselves to feats such as the Grouse Grind, cycling, jogging or walking along The Seawall and through Stanley Park, or indoor or outdoor yoga classes. Home to many diverse ethnicities and cultures, Vancouver also offers a bevy of culinary delights. Stop at a food truck while shopping downtown, spend an afternoon sampling gelato, fruits from the Okanagan Valley, and cured meats at Granville Island Public Market or enjoy some solo fine dining at one of Vancouver's best restaurants.

Vancouver's transit system, particularly the newer Skytrain, is convenient and safe for the solo traveler. (It stops at the Olympic Village if you want to take a peek.) It's also a great city to see on foot or bicycle, with many bike-friendly paths and bridges.

Vancouver is a truly wonderful city. During my time there I ate delicious foods, sipped inventive and perfectly balanced cocktails, sampled delightful Asian pastries, enjoyed artisanal coffees, and was able to hike, walk and cycle off all that indulgence too. 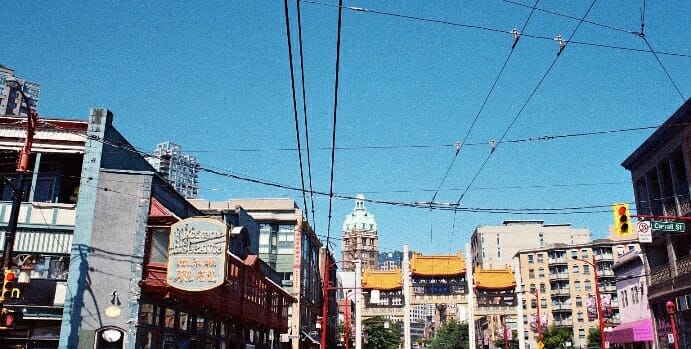 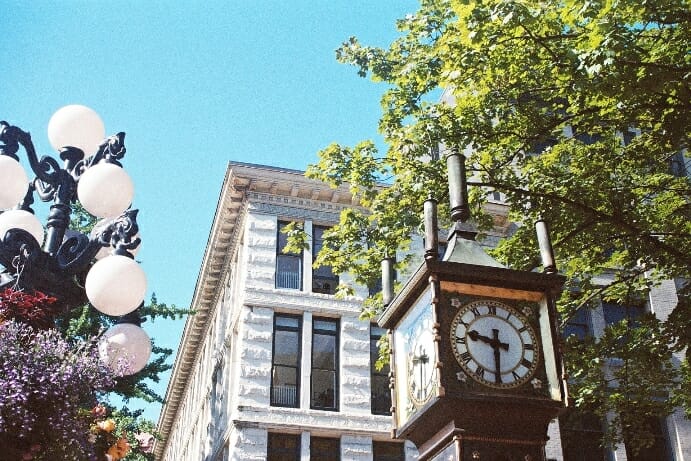