The Lake District has a romantic past. William Wordsworth and the Lake Poets drew attention to this special area in the northwest corner of England during the 19th century. It has since become a destination for nature lovers and walking enthusiasts everywhere. I recently traveled there solo. I went to the Lakes for a digital detox – to escape the always online digital world. In the process I acquired a new love. 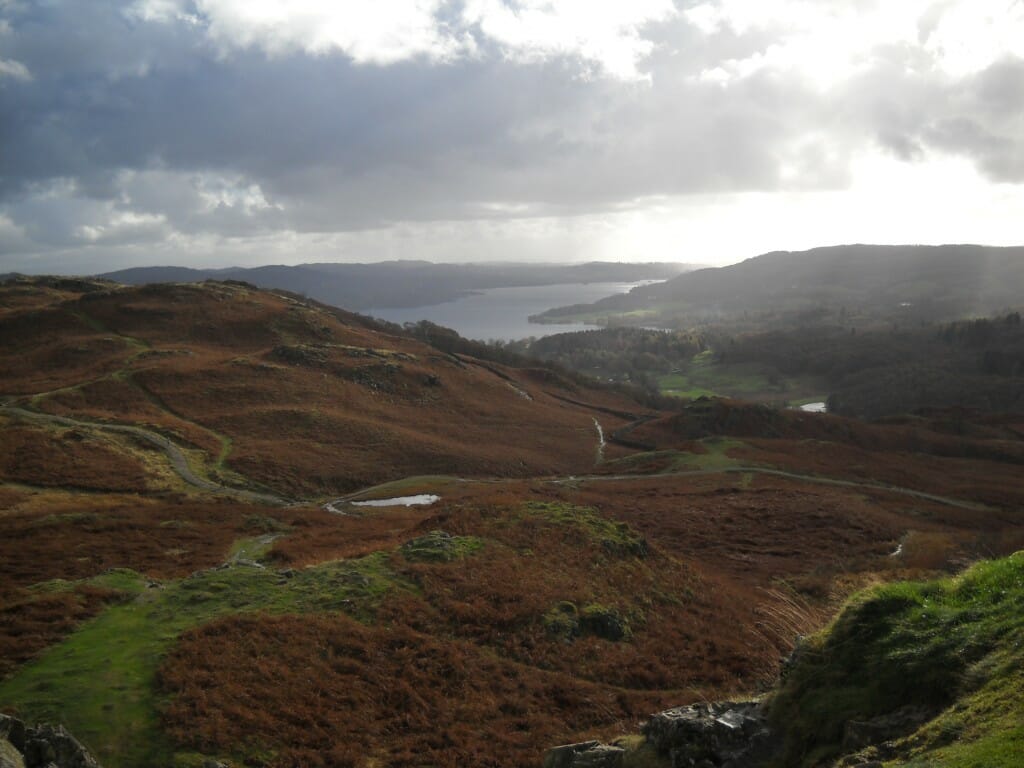 I had the good fortune of being introduced to the Lake District by Zoe Dawes, the Quirky Traveller. On my first day, Monday, we did a few small walks and visited a couple of villages while Zoe gave me her quirky tour of the area. The next three days were up to me.

I rose early on Tuesday and had a very substantial breakfast of muesli and yogurt followed by smoked haddock and poached egg. The haddock I thought appropriately daring the night before. That morning I wondered if it was a good idea. But it was fantastic!

After a consultation with Allan, my host at the Rysdale Guesthouse and walk advisor extraordinaire, I headed to scale Loughrigg, the fell (mountain) that could be viewed from my room of this lovely Edwardian home. Okay, scale might be a bit of an overstatement, but then, walking is an understatement. This fell is 1100 feet to the pike (top) and there were times that I was climbing, hands and feet over rocks, to get to the next level.

After an hour or two (time doesn’t really mean much in the fells), I thought I had reached the top, took the photos to prove it and continued along the path to go down only to discover that I had to go up some more. It was at this point that I wondered: is this fun? Do I like this? Is the notion of walking better than the actual doing? I did finally reach the top and was rewarded with a stunning view highlighted by a beautiful rainbow. 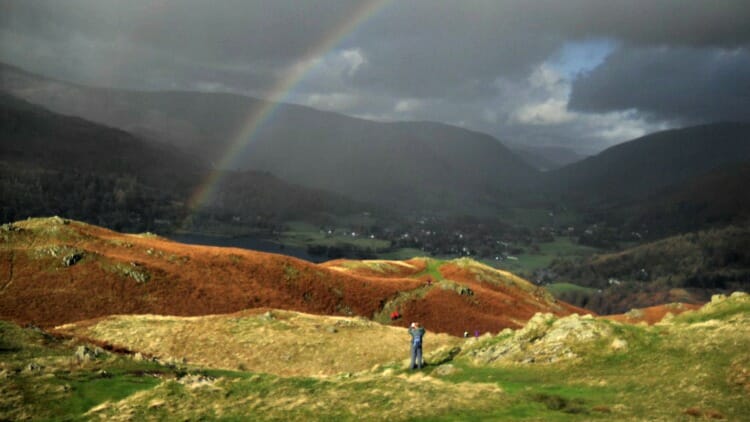 I could just leave that hint about the weather there but, as any of you who read between the lines already know, a rainbow means rain. Yes, the weather in the Lakes was not perfect when I was there. In fact, it rained numerous times every day. The paths I walked were often streams. But, as I was told, that’s why there are lakes. Unlike Canada where the lakes are usually spring fed or come from snow run-off, these lakes depend on rain completely. 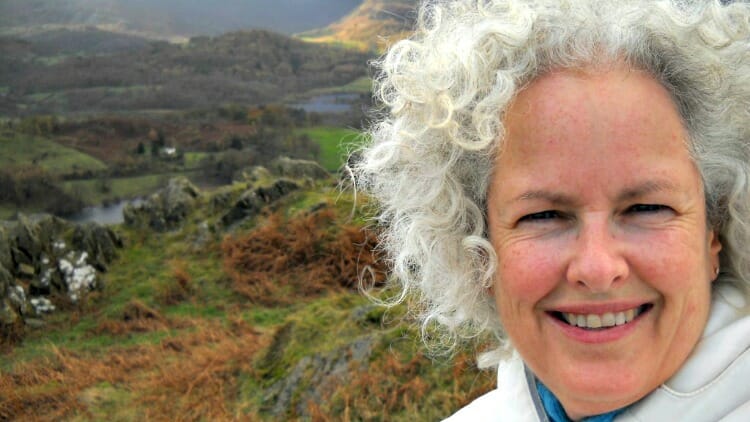 Day one on my own I spent walking just over 10 km (6.5 miles). It had taken me about 4 hours – a very long time to cover 10k. I did half of it in the rain and all of it walking through water. While I held the motto, “there is no bad weather, only bad clothing” to heart and took full responsibility for the fact that I was soaked through, I wondered: is this really any fun?

Yet, I awoke the next day eager to go out again. There is something strangely addictive about walking in The Lakes.

The Falling in Love Part

Wednesday I took it a bit easier by walking the coffin route from Ambleside to Grasmere. This is the path that people in Ambleside would take to carry their dead to a consecrated burial ground in the neighboring village in the 19th century. It meanders up and down but there is no real climb. Along the way you there are a few stones called coffin rests – they are there for the coffin carriers to take a break on route. There is also a lovely tea room part way along at Rydal Hall. 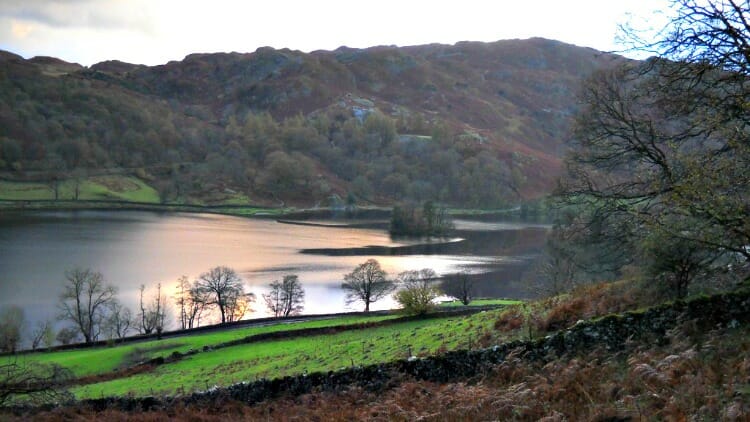 I was already drenched by the time I reached the tea room. My feet were dry as I had taken time to buy hiking boots in the morning but my rain resistant jacket had succumbed to the moisture. I went in and hung my jacket near the high efficiency fireplace, ordered a pot of tea and sat down on a comfortable couch.  Soon two men joined me on the couch opposite. We fell into conversation and it wasn’t long before we set off together towards Grasmere. Chris and Peter of Liverpool were wonderful company. They gave me a history of the fells and pointed out details that I would never have noticed had I made the trip alone. 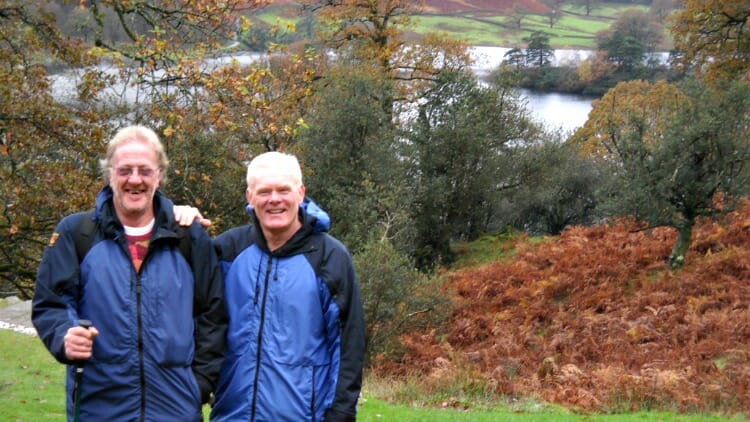 We parted just as we entered Grasmere as I wanted to visit Wordsworth’s Dove Cottage and absorb  yet more history of the area.

On my final day I again consulted with Allan and decided that my objective would be Wansfell Pike – a steep climb of 1500 feet.  It was a foggy, damp day and it didn’t get any better as I climbed the steps of Wansfell. The walking routes in the Lake District are very well maintained and many have steps for the very steep part.

I climbed slowly, as did most of the people I met on the path, except for Gerrard. Climbing with his polls he literally flew up the mountain. Gerrard was the first born and bred local person I met in the Lake District and I couldn’t have met him at a more opportune time. The pike of Wansfel was in a cloud. The visibility was maybe a few hundred feet. I couldn’t see Lake Windermere and the various fells and villages but I did have Gerrard to describe everything I would have seen had the weather been with me. 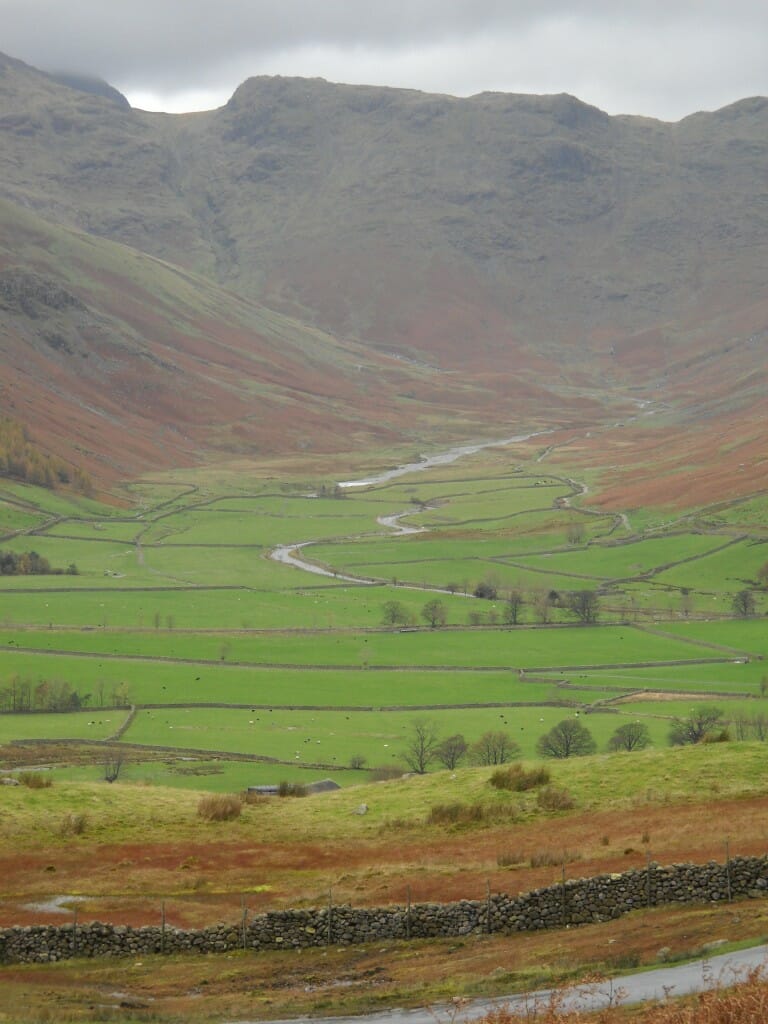 Descending the other side, I went to the Mortal Man pub in Troutbeck for lunch. From there I started the journey home and was stopped in my path by an absolutely stunning view of Lake Windermere. At that moment, all the views I had enjoyed, the pleasure of physical exertion, the satisfaction of having walked for three days straight, converged and I was in love. The Lakes now hold a truly special place in my heart.

As for my digital detox, there were no shakes, no anxious moments.  Leaving the digital world behind can be done, especially when walking the fells. Walking requires focus. It required my attention to get my footing right, follow the map and instructions to stay on course and, of course, to take in the beauty. It was easy to leave thoughts of work behind.

Thank you to Cumbria Tourism for their support with this trip.