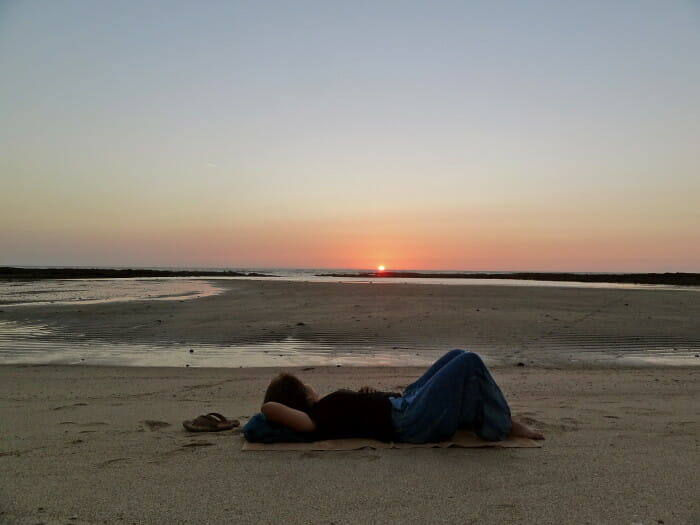 Watching the sunset on a virgin beach on India's west coast

It has now been three years since I was in India. Most of my tips here are still relevant but I'm very happy to share more with you here thanks to Shivya. She has both a traveler's and a local's perspective. See more info on Shivya at the end of this post.

Despite having grown up in India, I began discovering my country only when I turned 23. I had just quit my corporate job in Singapore and moved back to India after six years abroad, wide-eyed and dreamy about discovering the secrets of my own backyard.

Having travelled mostly by myself for the last three years – both in India and other parts of the globe – I have come to discover the challenges and joys of being a single woman maneuvering the complicated, chaotic, intrusive, romantic, heartwarming country that is India.

Here are my tips on how to travel solo safely, responsibly and adventurously, especially as a single woman, in India.

Arrive with an open mind. Researching India as a solo travel destination can feel pretty darn scary. I’ve met many travelers who have formed their opinions of the country even before they arrive – and that’s half the battle lost. By all means, do and overdo your research, but when you set foot in India, make way for your own experiences. Embrace the colors, give the people a chance, be amazed by the little things, and if the chaos and inequality overwhelm you, so be it. It is not hard to love or hate India, but give it a fair chance to impress you or scare you away. 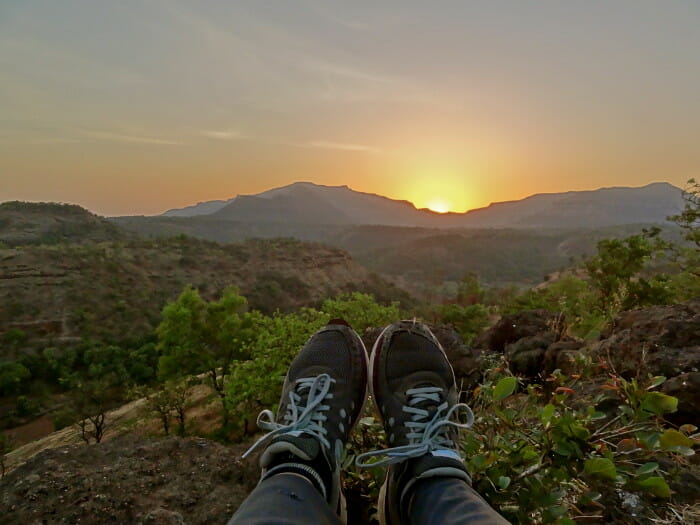 Solitude in the Western Ghats

Fight temptation and take it slow. It is tempting to crisscross the country and see a little bit of everything. But as a local, my advice is to take India in small, deep doses – stay long enough to get under the skin of the place that piqued your curiosity, because that’s the only way to scratch beneath the surface and try to understand the complex dynamics of Indian society and its many cultures. I grew up in a small town at the base of the Himalayas, and even within my own state of Uttarakhand, the two main regions (Kumaon and Garhwal) have their own unique culture, cuisine and way of life. Now multiply that by 29 states and then some, and you know how futile it is to try to ‘do’ everything.

Start by interacting with the local women. This is my golden rule to access a place when I first get there. Be it fellow passengers, someone I stop to ask for directions, or the staff at a restaurant, I try to converse with the local women and find out about the places and things they love in their part of the country – and more importantly, places that they wouldn’t go alone. It is amazing how many things a guidebook won’t tell you and even more amazing how easy it is to make a friend.

Dare to go off the tourist circuit. I’ve always felt far safer in a remote village in the mountains or by the coast than in a tourist-centric town like Rishikesh. This likely sounds counter-intuitive to the logic of going where everyone else goes so that you have the safety of other travelers but less touristy towns are safer because of India’s cultural dynamics. Typically, people from all over a region go to set up shop in a tourist city with the sole intention of making money – moving in and out often – resulting in a fragmented community where no one really knows anyone else. This means that the inhibitions caused by being judged by the community for a misdeed, such as harassing a visitor, are very low. India is still grappling with gender issues and laws are so lax that the idea of being judged by society is a greater deterrent than any legal enforcement.

In a small village that receives few tourists, the local community is likely to be more closely knit and a visitor will be received with more genuine curiosity and warmth. Indeed, I find that the moment I leave the tourist circuit behind and go to a relatively offbeat place, I am received with overwhelming hospitality, and locals – both men and women – tend to go out of their way to look out for my safety and wellbeing. I even found the confidence to hitchhike solo in remote Himalayan villages in Himachal Pradesh! 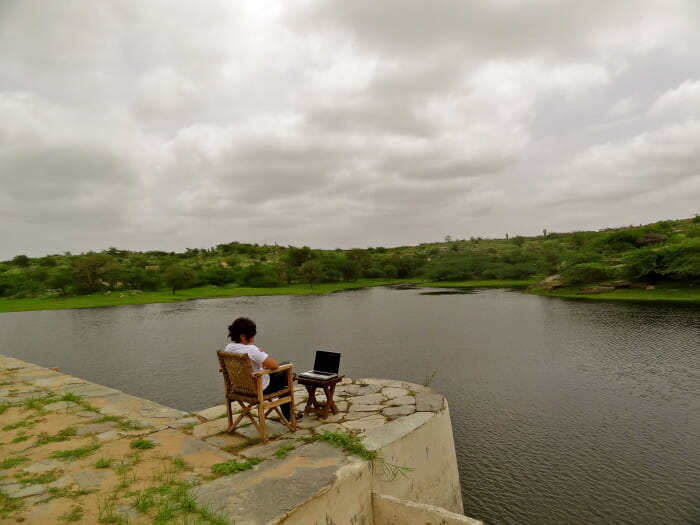 Inspired to write in Pali, Rajasthan

Ditch budget/fancy hotels for family-run homestays. Homestays in India are like B&Bs in the west, but a lot more personal – and luckily for solo travelers and culture seekers, they are really catching on in India! Whether you want to spend 600 rupees (10$) or 6000 rupees (100$) a night, you’ll find that within the same budget, homestays generally tend to offer better value for money in terms of the quality of accommodation, personal interaction with a family (and usually a chance to experience their way of life), and an intimate peak into the local culture and traditions of a region. It is how I ended up attending an ancient shepherd ceremony of drinking opium from the village elder’s palm in Rajasthan, living in an off-the-grid tree house in the jungles of Karnataka, and discovering the fast disappearing Portuguese traditions of Goa.

Having said that, as with any accommodation in India, I highly recommend that you read reviews online – on Tripadvisor or blogs – before making your travel plans.

Don’t be cheap or shy with public transport. I know that boarding a cramped local bus or train without a ticket or a plan is a quintessential Indian adventure that must be had. But if your journey is longer than a few hours, and especially if it’s overnight, book yourself on an air-conditioned bus or train for just a few extra dollars and a lot more comfort and hygiene. (Don’t worry, there are great local interactions to be had in air-conditioned coaches too.) Booking train tickets in India can be complex for foreigners. Using Cleartrip’s booking engine is your best bet. Alternatively, ask an Indian friend or find a travel agent to do it.

While journeying solo, if I find myself in male company on a long overnight bus or train ride, I always request the conductor (or ticket-checker) to swap my seat and let me sit with a female companion. I know it might sound ridiculous, but the chances of inappropriate touching are far higher in India (a sad reality), and it’s infinitely better to have your peace of mind this way. 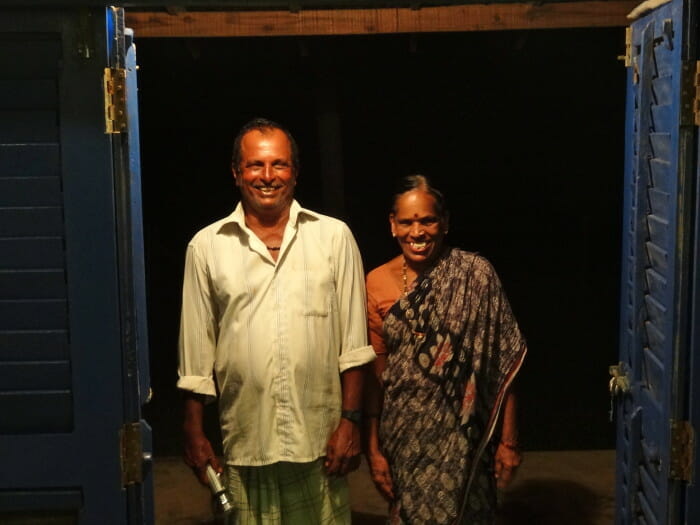 Dress modestly… though that doesn’t necessarily mean in Indian clothes. Contrary to most India travel advice you’ll find online, I don’t think wearing an Indian kurta will prevent you from being stared at, or even let you blend in. Let’s face it – if you have blonde hair or fair skin, you will stand out. In fact, I’m sometimes mistaken for a foreigner myself, having relatively less pigmentation from my mountain upbringing! In my opinion, the best way to avoid being stared down or photographed is to dress modestly – and by that I mean, show no cleavage (so a T-shirt that covers everything is better than a loose kurta that can slip down to your cleavage) and avoid short skirts that show off those sexy legs! I hate to say it but barring some parts of Goa and southern India where women culturally wear dresses, you’re better off covering yourself, perhaps even experimenting with a tomboyish look.

When in doubt, ask. India is straddling orthodox traditions with growing western influences – a cultural maze that sometimes even I find hard to navigate. There is only so much you can learn online; for everything else, ASK. Ask your hosts, the staff at a hotel or restaurant, a local woman, or even the Twitterverse. Whether it’s a cultural taboo or a question about India’s complex matriarchal society, ask because it’s the only way to dig beneath the appearances of the country. And also because it’s a great way to make friends – you’ll find that everyone has an opinion and the time to share it.

Keep a self-defense weapon with you. Even if just for your own self-confidence, do it. As long as you do your research and trust your gut, chances are you’ll be fine. But for unforeseen scenarios, like having to walk down a dark alley alone when a plan didn’t work out, stay prepared. I carry an electric taser or a pepper spray with me (both in India and elsewhere) and keep them where I can access them easily. And no, over my 3 years of traveling in India, I’ve never had to use them.

You can easily buy a pepper spray from a chemist shop in India. A taser can be ordered on Amazon and carried to India.

Use the ‘reserved for women’ options. You’re a feminist and you want to scorn at these ‘women-only’ options in India. I do too. But truth be told, they make my life easier in a country that might take decades to solve its gender issues. The Delhi Metro for instance, has the front car reserved for women, and at rush hour, when the trains are packed, its almost inevitable to get felt up in the cramped men’s compartment (my male friends attest to that too!). There are ‘ladies seats’ in most long distance buses, and in some states in southern India, it is a cultural norm for women to be seated in the front section of the local buses. If you can set aside the implications of this gender segregation, it’s the perfect chance to indulge in some friendly banter with your female co-passengers!

Forgive the intrusion and give Indian hospitality a chance. I don’t know where India’s ‘staring’ syndrome stems from but you’ll inevitably find people starting at each other, and especially at those who seem different from them (aka foreigners). Perhaps it’s an innate curiosity, which also shows itself in the form of intrusive questions – Are you married? Why are you traveling alone? What is your salary? Even I can’t run away from them, so after a fake story (or sometimes the real one), I try to turn the intrusion around into a chance to learn more about the people I meet along the way. If you can, forgive the intrusion and treat it as your chance to intimately glimpse their way of life. Chances are, you’ll find an incredible story – and leave with a friend on this side of the globe. After all, isn’t that what traveling is about?

About the author… Shivya Nath quit her corporate job at age 23 to travel the world, and her own backyard – India. She has lived at a nunnery in Ladakh, witnessed a meteor shower in the Thar Desert and hitchhiked solo through remote Himalayan villages. India never stops surprising – and inspiring – her. Join her adventures on her travel blog, The Shooting Star, and on Facebook, Twitter and Instagram.