You are here: Home / How to Travel Alone / Your Passport in Your Knickers – or – How to Beat a Scooter Bandit 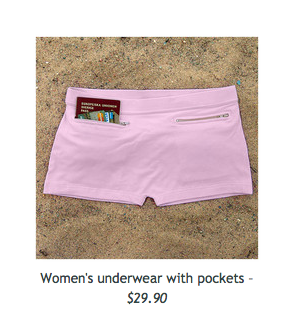 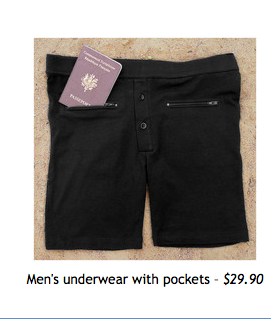 I was in Naples, Italy walking across an intersection with the green light. There were people in front of me and people behind me. My sense is that there wasn't room for a scooter to fly between us without crashing but that's exactly what one did.

Yes, I was mugged by a scooter bandit. At least, it was an attempted mugging. I was wearing my purse across my body, from my left shoulder to my right hip, and all the bandit got was the strap that broke away. I'll never forget how the bandit looked back in disbelief – with the strap hanging from his hand. Thank goodness my purse broke.

I recently received an email about underwear with pockets for your passport. It made me smile and think of that incident with the scooter bandit. If he had got my purse, my passport would be gone as well. If I had my passport in my knickers, it would be safe. I haven't bought this product. (If you're interestested, you can check them out at Clever Travel Companion).

All these thoughts prompted me to ask members of the Solo Travel Society on Facebook for their recommendations about travel gear. And, interestingly, a similar story about a mugging in Barcelona came up.

Just to let you know, there are about 25 pages dedicated to Safety in The Solo Traveler's Handbook. From the link on the left, you can also buy the Kindle version for $4.99 (and download Kindle software for any computer for free.)

You can read a review of the knickers here.