You are here: Home / How to Travel Alone / A Solo Point of View / Solo Travel in Toronto: The World in One City

This month’s theme on Solo Traveler is Blurred Borders. Watch for more posts on this topic throughout July as we explore it from different angles. Today’s post was inspired by my experiences while writing my new book. 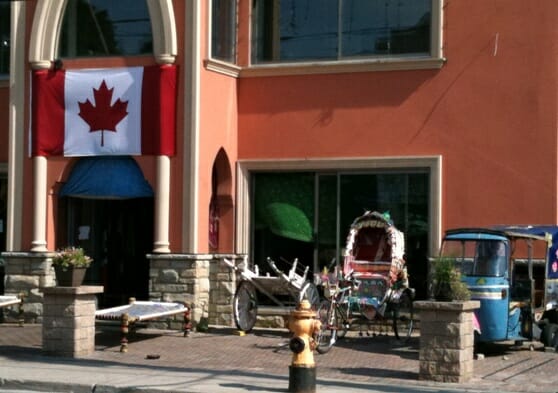 Rickshaws and a Canadian flag in Little India.

When I was writing The Solo Traveler's Handbook, I spent a lot of time in the downtown Toronto Reference Library. Rather than working in my home office or my usual neighborhood haunts, I spent weeks taking public transit into the heart of the city and, while of course I know that Toronto is a multicultural city, I was struck by just how much so. This led me to consider the blurring of borders, both in my home country and while traveling. It occurred to me that a solo trip on a public transit route cutting across the city could yield some insight. But then, I didn't have time. I'm in Washington today, preparing for my presentation at the Smithsonian Institute tonight. So I sent Tracey on assignment. Here she shares her experience of the world in Toronto.

I am an unabashed fan of the City of Toronto. As a kid living in the country, I couldn't wait to grow up and move to Toronto. It seemed to me such an exciting, creative and diverse place, and I wanted it all. As an adult, I still love it, and when Janice asked me to think about it in the context of blurred borders, I was eager to jump in.

The Queen Street streetcar route in Toronto may have been lauded by National Geographic as one of the world’s Top Ten Trolley Rides (in part for its length – 30 miles in all), but for cultural diversity, the Carlton Streetcar gets my vote. In the course of an hour or so, you can pass by or though a wide array of communities. Interestingly, there are no harsh transitions: one just seems to meld into the next. 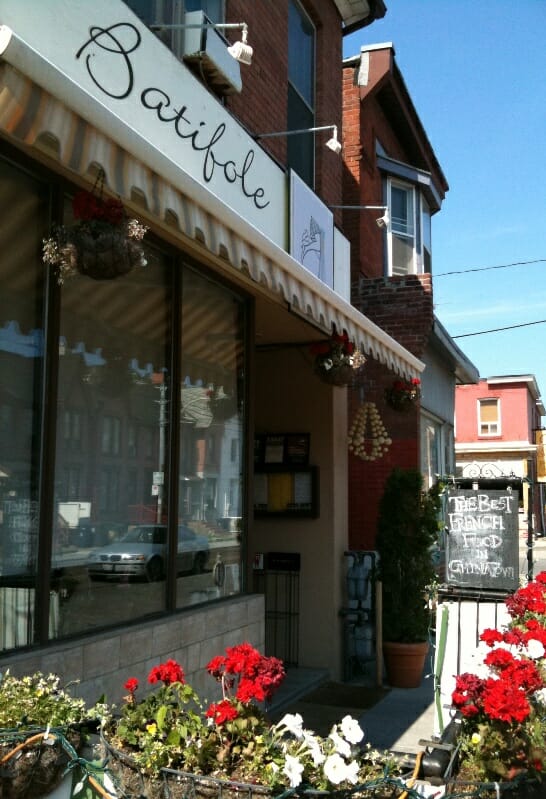 The Best French Restaurant in Chinatown.

The Gerrard India Bazaar, locally referred to as Little India, is located in the east end of Toronto. At different times of the year, you will see the neighbourhood decorated for Diwali, the festival of lights, or see locals out for a stroll in the hot summer weather, enjoying freshly grilled corn on the cob from sidewalk barbecues. Passing by the very popular Lahore Tikka House, you can see visitors having their pictures taken sitting in decorated rickshaws, right underneath a huge Canadian flag.

Chinatown East, one of several Chinatowns in the Greater Toronto Area, is much smaller than the better-known downtown Chinatown, but it is always bustling, especially on weekends when a wide variety of fresh produce is displayed on the sidewalks for shoppers to peruse. There are many Chinese and Vietnamese restaurants here…and one French bistro. Batifole proclaims itself as having “the best French food in Chinatown.”

A little further west is Cabbagetown, so named for the poor Irish immigrants who are said to have planted cabbage in their front yards for food, after living through the Irish Potato Famine. Now, it is home to diversity of a different sort: as you travel across Gerrard Street you see Canada’s oldest and largest public housing project on the south side, and million-dollar homes on the north. The crumbling public apartment buildings, however, are now being torn down, to be replaced by an integrated community of both assisted housing, and market-price homes. 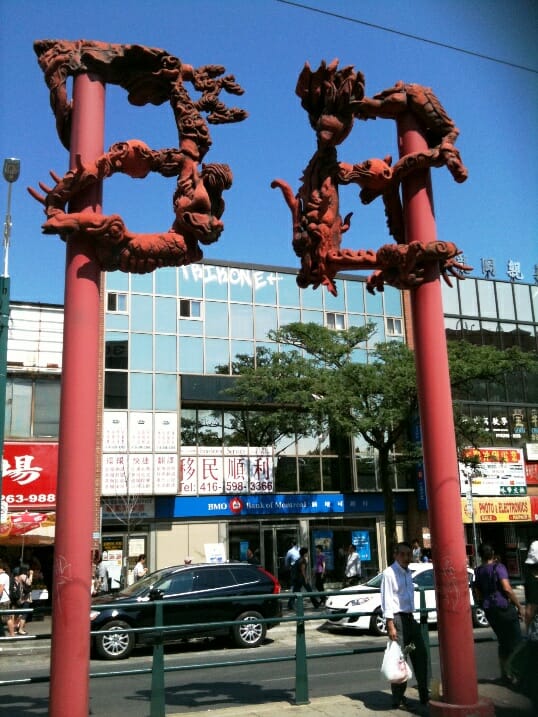 A few stops further along the route, you will pass along the outskirts of the Church Wellesley Village, home to many gay-positive restaurants, bars, businesses and services, as well as one of the largest Pride festivals in the world. The rainbow flags that fly here represent not a country, but a message of inclusiveness and celebration of diversity.

One of the largest Chinatowns in North America also lies along the Carlton streetcar route. It actually encompasses a number of East Asian cultures, and is a huge draw for tourists and locals alike. In the middle of Spadina Avenue stands a 20-foot sculpture, based on the Chinese symbol for “gateway.” It signifies the metaphorical transition of one community into others, and it has the same meaning in several different languages, including Japanese and Korean.

On the west side of Chinatown sits Kensington Market, a mix of cultures that has changed over the years with successive waves of immigration. This creative community of shops, restaurants and galleries, famous for its outdoor market and car-free pedestrian days, has been named a National Historic Site of Canada. A sculpture marking an entrance to the neighbourhood features a large globe, representing the planet we all call home.

West of downtown you will find Little Italy and the world’s first and only Italian Walk of Fame. This area has become a very popular dining and clubbing destination, with lots of sidewalk cafes. It is also home to Portuguese and Latin American communities. Although the area largely caters to young professionals now, you can still see men enjoying an espresso at traditional social clubs. 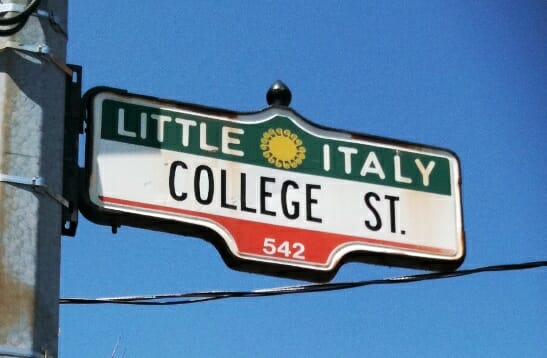 Home of the World's First Italian Walk of Fame.

My trip across Toronto felt like a metaphor for travel in general. I passed through different “countries,” hopping off from time to time to enjoy what each community had to offer.  Eventually, I headed back home, having seen, tasted, learned or met someone or something new in each place. And I know I will head off again to discover more.

The Blurring of Borders

As solo travelers, we take our culture out to the world, and other travelers bring theirs to us. As I travel across this city, cutting a swath through languages, cuisines, religions, arts and communities, I see the blurring of borders. Whether it is a Pakistani restaurant adorned with a Canadian flag and rickshaws, a French bistro in Chinatown, rich and poor rejecting the road that separates them, or a prominently placed sculpture denoting the flow of cultures into and out of one another, one thing is clear: we all are transformed by these experiences.

And so it is with travel.

As solo travelers, we have a unique opportunity to participate in this cross-cultural pollination. When you travel with others, your communication is often lateral, between yourselves. When you travel alone, you are facing outward, open to the world, and inviting it in. You share your culture and learn about others. You pick up a little, and you leave a little behind. You and those you meet are enriched. Borders are blurred, and understanding grows.