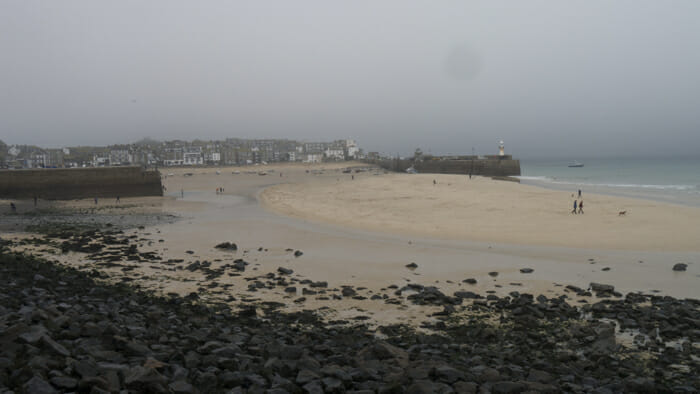 My first view of the sea at St. Ives

The forecast was poor and I hadn't quite gotten used to the notion that the weather would be that way for most of my week in Cornwall.

I would come to remember that there are reasons that I packed full rain gear and my waterproof hiking boots.

But after walking in the fog on my first day I decided not to walk in the rain on my second. Instead, I headed to St. Ives, Cornwall, a town in southern England that has attracted artists and tourists since the 19th century.

Beautiful landscape and the quality of light on the sea are mentioned frequently as the reasons that artists were attracted to St Ives though the latter is difficult to understand. (Read: The Special Quality of Light in St Ives). JMW Turner painted a landscape here in 1811 however it was in the 1920s that the town became a real centre for the arts with Bernard Leach, Ben Nicholson and Barbara Hepworth moving here. Thus began the St Ives School . In 1993, the Tate St. Ives Gallery opened followed by the Barbara Hepworth Museum. This led to the opening of many more galleries and an art scene that is flourishing.

But it wasn't for the galleries that I went to St Ives. True to the purpose of my trip, I wanted to enjoy the fresh air as much as possible. The day didn't turn out as badly as expected and I walked (more accurately, meandered) along the boardwalk and shoreline path around the town. Below are some of my photos from the day. 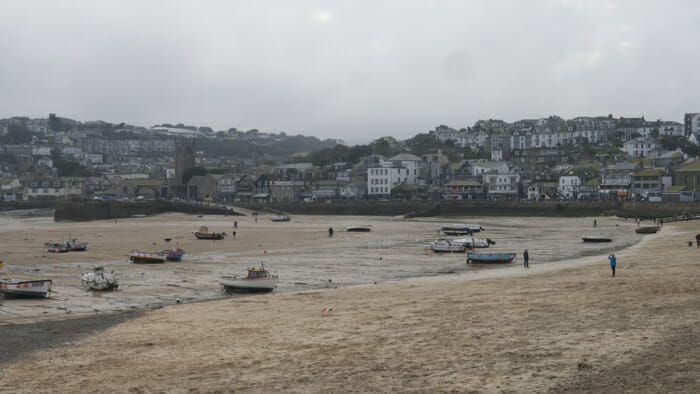 The tide was out and everyone was walking in the foreshore zone – yes, I looked up the word for the land exposed between high and low tide and it is foreshore. 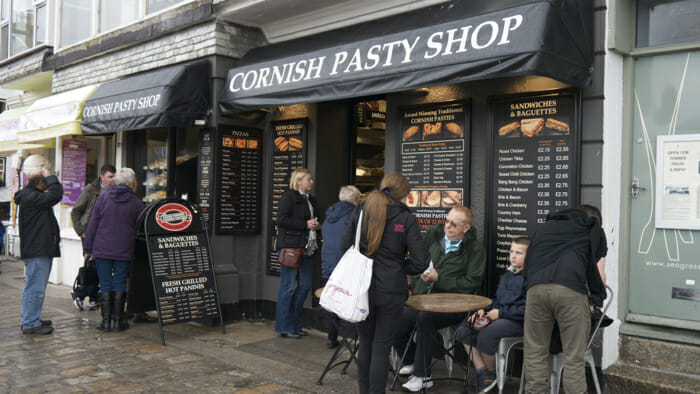 I stopped for lunch and had a Cornish Pasty. They are famous throughout the UK so why not enjoy one in Cornwall. 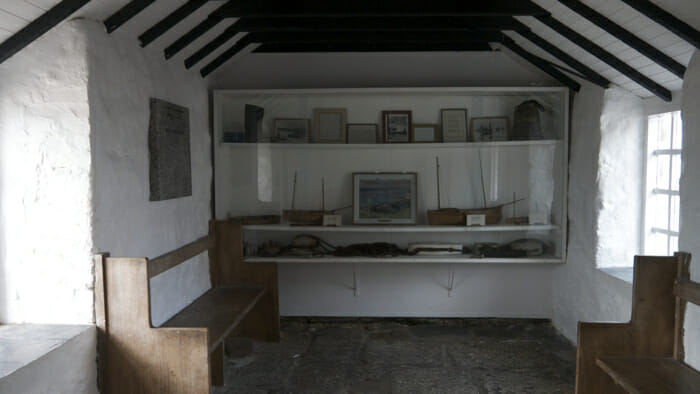 The interior of Saint Leonard's Chapel, the traditional chapel of the fisherman of St Ives. 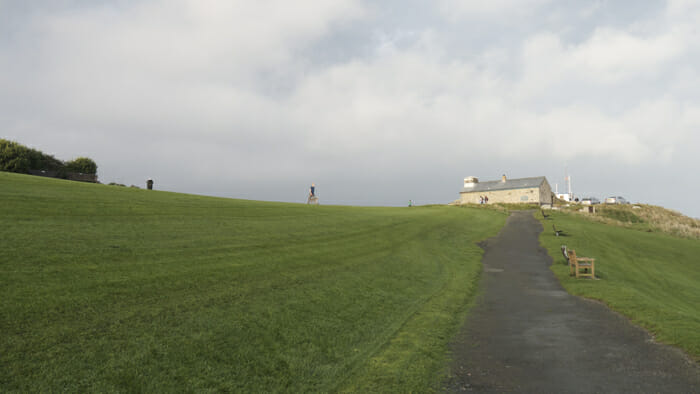 St Ives has many bays. This is a view up the Island which isn't an island at all but a headland. See the map at the end of the photos. 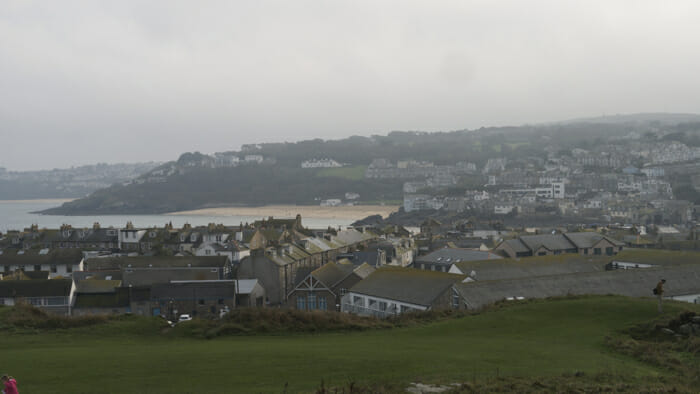 View of St Ives from the Island. 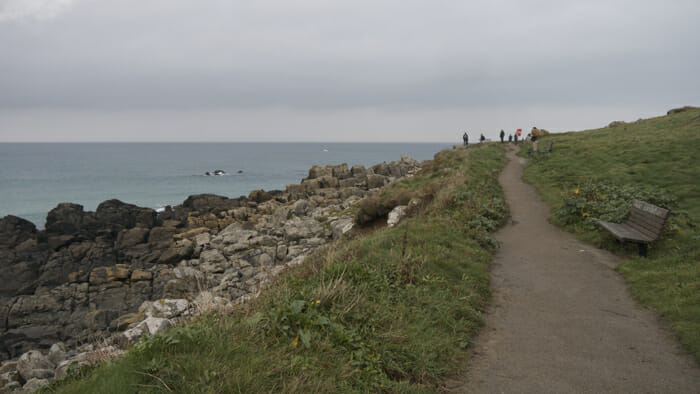 Walking around the island on the coastal path. 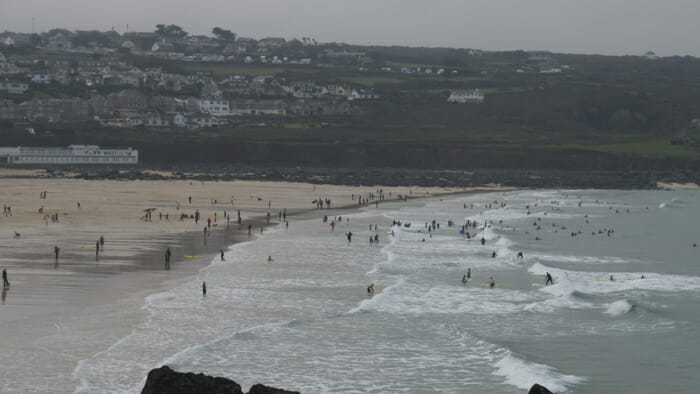 On the other side of the island is Porthmeor Beach where people have been surfing for more than 100 years. 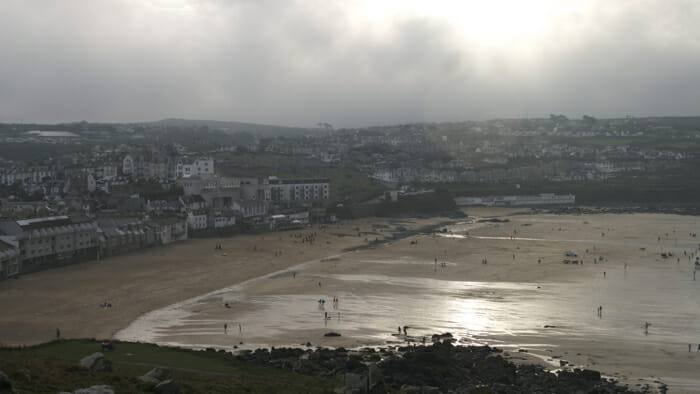 Suddenly, on this cloudy day, the sun broke through, just enough to gleam on Porthmeor Beach. 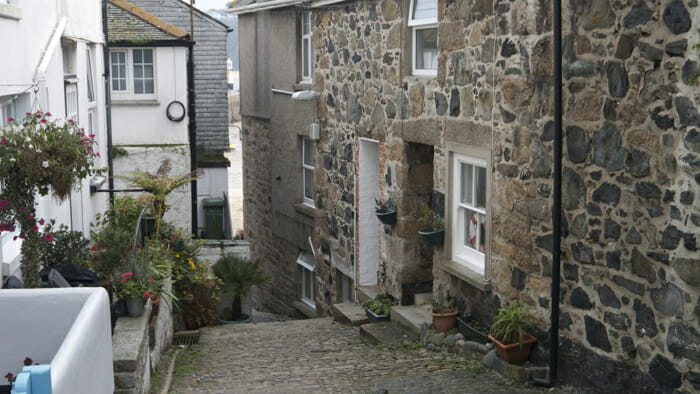 Walking back into the town through the tiny cobblestone streets. Most were full of shops and tourists but there were a few that were empty.  You'll find Tourist Information on Street-An-Pol. 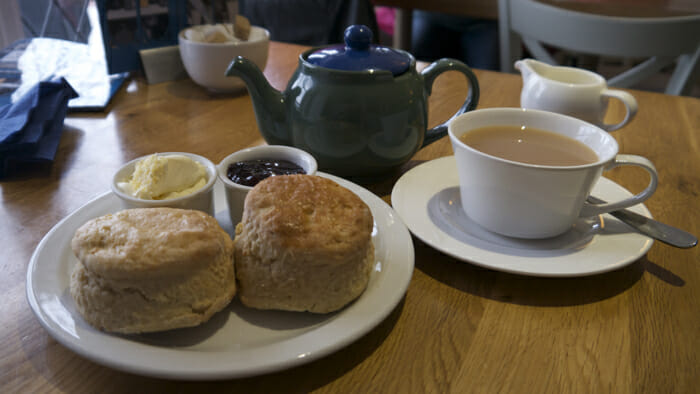 Oh, and a cream tea at the end of a great day. The clotted cream and strawberry jam on a scone is to die for. 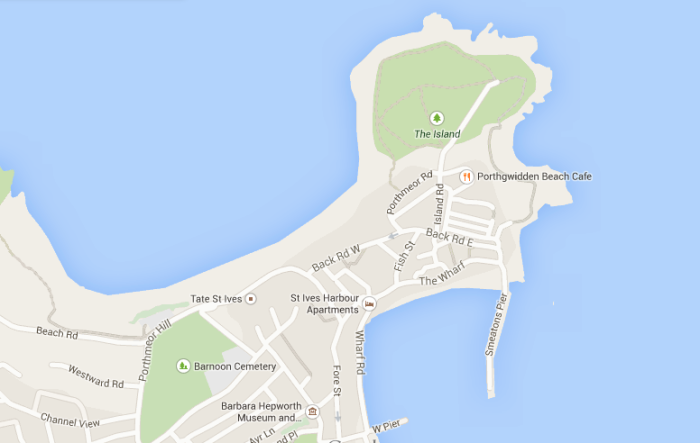 You can see here that the island is really a headland.