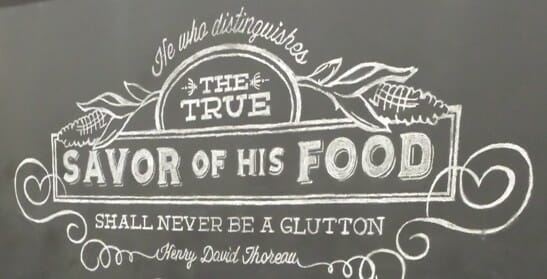 I love it when a destination surprises me.

When you think about great food and drink, Pennsylvania may not be the first place to pop into your mind. And when you hear the name Hershey, it may be an image of foil-wrapped chocolate kisses that comes up. But I can tell you that there is some good eating and drinking (and a lot of personality!) to be experienced in the Hershey Harrisburg area.

Troegs Brewery has what they call a snack bar. Now, I know what a snack bar is. My first job was at the snack bar at a small town hockey rink. We served up hot dogs, popcorn, potato chips, and soda – all pre-packaged. The Snack Bar at Troegs is definitely not that.

The bar at Troegs. Drop by for a tasting and take the self-guided tour.

Presided over by the incredibly enthusiastic and passionate chef Christian DeLutis, everything is made from scratch – they even smoke their own bacon! The popcorn, which I highly recommend consuming while you work your way through a beer tasting, is drizzled with brown butter, and sprinkled with rosemary and sea salt. The menu has a focus on local ingredients, so it changes with the seasons. It is filled with options like duck confit, oysters on the half shell, and dishes that incorporate their beer, such as Mad Elf fondue. 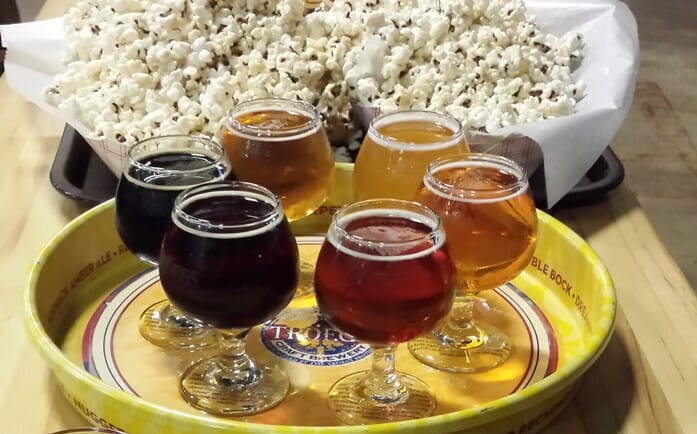 Breakfast of Champions: a flight of 6 different Troegs beers, along with rosemary-brown butter popcorn.

Even if you aren’t interested in the brewery tour, in fact, even if you don’t really like beer, you should eat here. But you really should try one (or several) of the beers on offer, which also change seasonally. I tasted 6, from very light to very dark, and each was entirely distinct from the others. Some even followed me home. 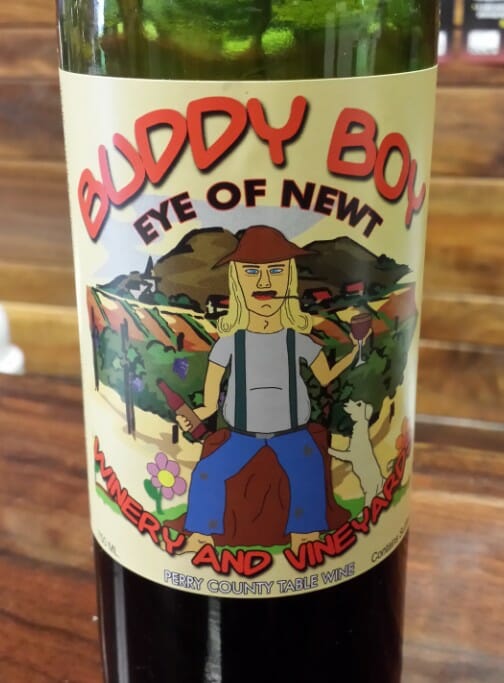 This is Buddy Boy, and this is his wine.

What can I say about Buddy Boy? It is both the name of the winery and the name of the winemaker. This guy has personality to spare! His wines have names like “Four on the Floor,” Miss Pissy Pants,” and “Tadpole Nectar.” They are made not just from grapes, but from strawberries, raspberries, and blueberries. Many of them are sweet. Some of them are very, very sweet.

Buddy Boy is a real character, and offers warnings such as “This one’ll knock ‘ya in the dirt!” as he serves up tastings of his award-winning wines. They may not be my, er, cup of tea, but who am I to argue with a winery that sells out of virtually everything it produces, and has a loyal local following? Buddy Boy knows his market, and he makes the wines that he himself loves. That sounds like success to me.

Josh and Jenna White are just about the loveliest couple you could ever meet. I swear you can taste the love in their food. You can certainly hear it in the way they talk about their food and the dream that led them to opening their own restaurant. 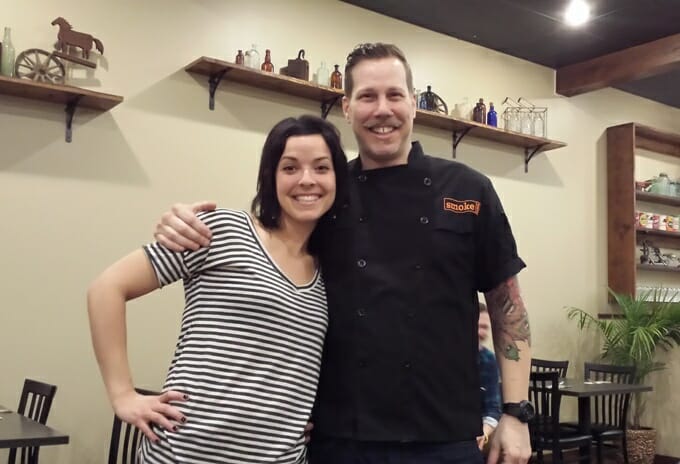 Everything at Smoke is made from scratch, from the mac and cheese to the BBQ sauce to the spice mixtures that they use. Josh’s Mom even makes the desserts. They are dedicated to all things local, sustainable, and cruelty-free, sourcing their meats from an organic farm and their produce and dairy from a co-operative of small-scale family farms in the area. They even acknowledge the producers that they work with, right on the menu. 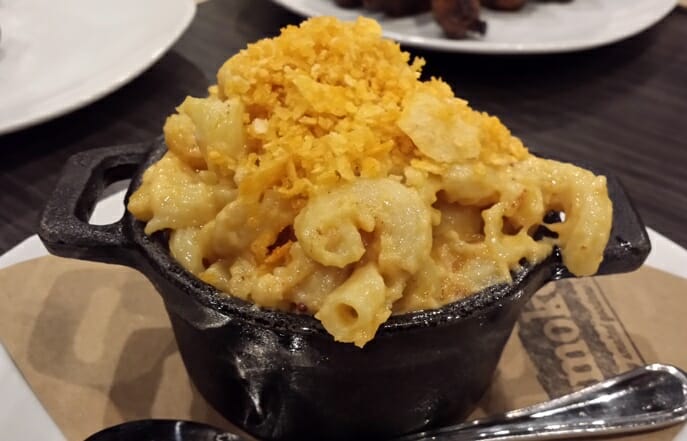 This is all fine and well, but how did it taste, you ask? Let’s just say there was a lot of muffled oohing and aahing going on as the food was going down. Nothing compares to the taste of bacon that has spent a week being cured and smoked in-house before being fried for you or mac and cheese made from local cheddar and smoked gouda, then topped with crumbled Middleswarth potato chips, local favorites  which have been made in Pennsylvania since 1942. 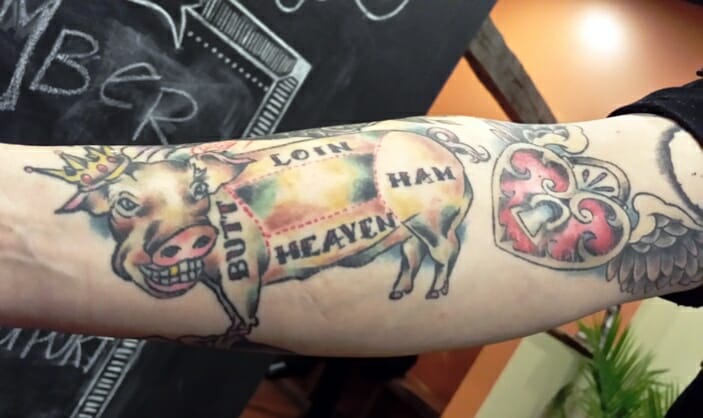 How devoted is Josh to the meat that he serves? This should answer that question.

At Smoke, they have a BYOB policy, so you can bring along some libations from one of the local wineries or breweries to complement your meal.

The Vineyard and Brewery at Hershey, Middletown

I had heard the story of the men who started this venture before I ever visited their tasting rooms. It is said that the idea for the The Vineyard at Hershey was hatched over a bottle of wine at a local piano bar (as many good ideas are). They had a dream to make world class wine in Pennsylvania.

Only open since 2012, those four friends have built something quite unique, brewing a range of craft beer; producing red, white, dessert, and fruit wines; and hosting dinners, concerts, and tastings on their sprawling property, featuring an 1860s farmhouse. As a Canadian, I was pleased to find a maple beer among their offerings when I visited, even if it was called “Sap Sucker.” They produce a number of dry wines, which I generally prefer, and I was pleasantly surprised to find that I enjoyed them enough to bring some home in my suitcase. 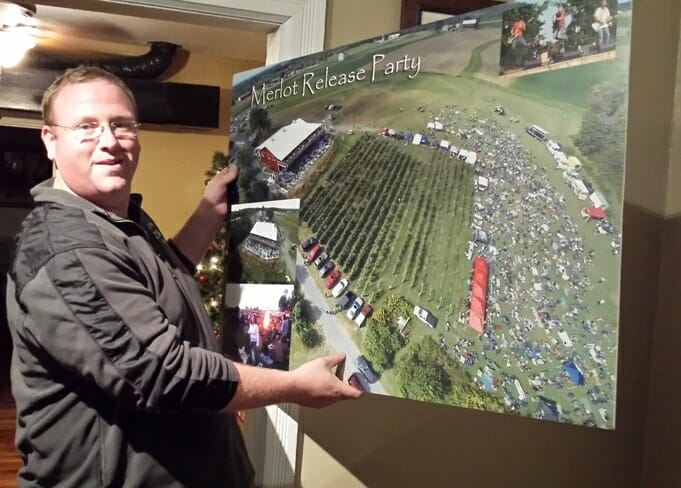 Jason Reimer proudly shows off the crowd that attended a recent event. They built it, and the people came.

These guys clearly love what they do here, and are very serious about the work, but just as serious about the play. Their excitement about what they are building, and their pride in what they have already accomplished is evident, and you can’t help but cheer them on. They are exactly the kind of people that you want to share a drink with.

Sharing it with the World

One of the great pleasures of exploring local food and drink as you travel is the opportunity that it presents to meet the people who create it and who devote themselves to sharing what is most special about the place they call home. I loved the way that the winemakers, the brewers, and the chefs of Hershey Harrisburg all made reference to the farmers, the land, and to each other as they spoke about their own products. They were passionate not just about what they were doing, but about what their neighbours were doing, and about making the links for visitors. They really do want you to get a taste of their part of the world, and with good reason. It was a delicious surprise.