You are here: Home / How to Travel Alone / How to Avoid the #1 Travel Budget Mistake 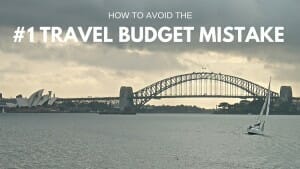 This is a companion post to How to Plan Your Solo Travel Budget – on Any Budget.

Did you ever return home from a trip with a queasy feeling that you may have spent more than you should have?

That you'll be paying for the trip a little longer than expected?

Or that your monthly contribution to your travel savings account is a non-starter for a while as the funds go to pay for the trip that just was?

My trip to Australia was significantly more expensive than expected. Sydney is a fantastic city but it is costly! According to Expatistan.com Sydney is 22% more expensive than Toronto and about the same as Paris. Who would have thought? While I checked the currency exchange to find that the Canadian and Australian dollars are about on par, I neglected to check the cost of living and that, clearly, was a big budgeting mistake.

This veggie burger and a specialty coffee at Market Lane Cafe in Manly, a mere ferry ride from Sydney.

I was not entirely solo on this trip. I stayed with family and spent some of my time with them and some of it solo. Having paid for my flight in advance and given that I would be staying with family I wasn't overly concerned about the cost of this trip. I had it in hand. After all, the two biggest travel budget items were covered.

Ah, but there's much more to spend travel money on and in a city as expensive as Sydney, this can take its toll.

After transportation and accommodation, food is the most expensive line item in a travel budget but it's not usually that big an item for me. This is where I messed up. A typical lunch at a coffee shop was $15 to $20 – yummy (Sydney is a foodie destination) but expensive. And buying in a grocery store didn't seem that much less. So my food budget ended up being sky high despite the fact that we had many wonderful home-cooked meals.

The #1 travel budget mistake is taking your knowledge for granted once the big budgetary items are accounted for. In this case it was the cost of living in Sydney, specifically the cost of food. A secondary mistake was not recognizing that my spending patterns would be quite different on a trip that involved others than on one of my typical solo trips.

So my recommendation to avoid travel budget mistakes is to take a good, hard look at how you spent your money when you return home. Get that reality check, take note of where and how you spent your money and whether you would do so again. I've done this for my Australia trip and I am the wiser for it. A reality check will help you avoid travel budget mistakes in the future.

Watch for my 32 Free and Low-Cost Tips for Sydney coming to you next week.