You are here: Home / How to Travel Alone / A Solo Point of View / Blurred Borders: My home in the World 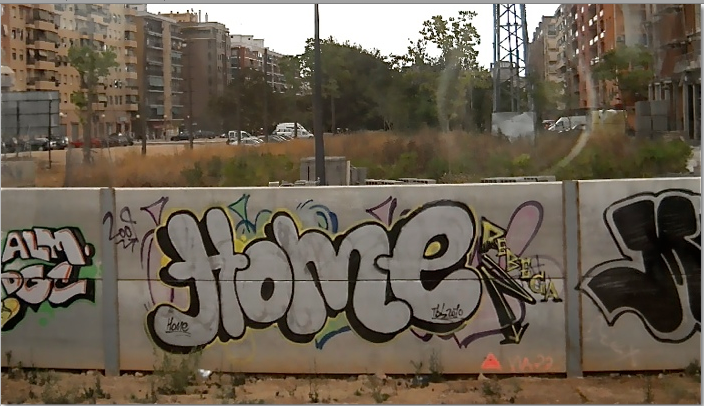 I snapped this while taking the train from Valencia to Benicassim, Spain. Yes, it's possible to find home almost anywhere.

Last week Tracey kicked off the Blurred Borders theme with a post on how you can travel the world in one city. This is the flip side of that post. This is about seeing my home as I travel the world.

In 1995 I was traveling with my husband and three of my sons. (This story gets to the solo part soon – hang in please.)  We spent three weeks camping in France and, like many Canadians traveled to Vimy Ridge to see the World War I monument. When there we went to a small village, more of a cross roads than a village really, and serendipitously met the mayor.

The street on which I live, and the school which my sons attended at the time, were both renamed for this village and the battle fought there in 1916. Young men from the street had died in that battle. Our expectation as parents was simply to give the boys a touchstone. Names have meaning. But when we met the mayor it became much more. He brought us to his farm and showed us his prize collection of farm machinery, including a Massey-Ferguson tractor. A bit of Canadiana in France. At the end of our visit, he took out a photocopy of a painting of that famed battle to give to the boys. We all went silent. The image in this photocopy and the painting that hung in the foyer of the boys' school were the same. 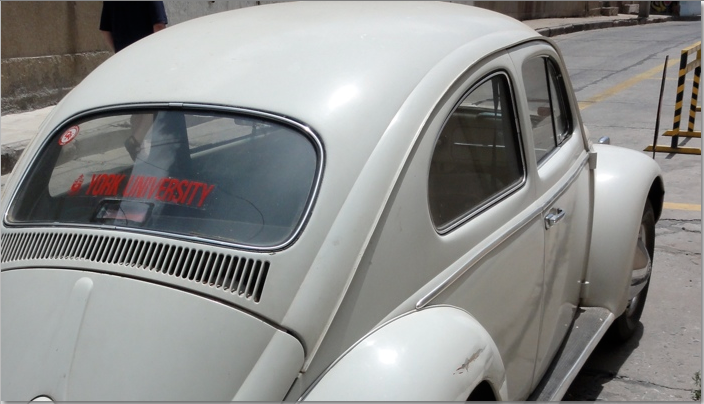 See the sticker in the window? York University is one of the major universities in Toronto. This Volkswagen Beetle was in Valparaiso, Chile.

Glimpses of My Home as I Travel

When I began traveling solo a couple of years ago, I started noticing many small references to Canada outside my country. References that happened by chance rather than by plan – or semi-plan as did our meeting with the mayor. And, after seeing a number of these references, I started collecting photos of them.

You see, I think it's important to recognize how blurred our borders are – how the world is in our home and how our home is in the world. Ultimately, that's what this Blurred Borders theme is about.

When enjoying Valparaiso, Chile, I was surprised to discover a car with a sticker in the window from York University. What's the backstory on that I wondered. When I mentioned this to my Chilean neighbors, they thought it could be a fellow refugee from the coup in 1973 who later taught at York. I doubt that I will ever know.

In Benicassim, Spain I noticed The Canadian Hotel. Why, in this small town near Valencia, would the hotel be called this? I went in to ask for the backstory but the people at the desk didn't know.

In Torres del Paine National Park in Patagonia, Chile I came across the forest fire warning sign. Their animal of choice wasn't Smokey the Bear but a Canadian beaver! Hmm? What I learned is that the beaver was introduced to the region a long time ago but, with no natural predators, were taking over far too much. So, the beaver it was.

In Playa del Carmen, Mexico I was amused to find the time in Calgary, Alberta cited as one of the four major time zones in the world. I wonder who had pull on that one?

These are but tiny pieces of evidence, of course.

What's more important is the way I see Canada in the world through people. I meet many Canadians on route and other travelers who have been to Canada. Both enjoy talking about my home. I also meet people who would like to move to Canada. It's fun to hear their impressions of the country and to share what information and help I can.

Glimpses of the World in My Home

In addition to seeing the world in my home country as per last week's post, I also see it in my home. I am second generation Canadian of Irish heritage (the north). My sons are third generation Canadian. One is married to a woman who immigrated from the Ukraine as an adult. Another to a 1st generation Canadian with Italian heritage. A third is engaged to a young woman who arrived from Zimbabwe when she was nine. I hadn't thought of this diversity until I came to the conclusion of this piece.

Our borders are, indeed, blurred. I think it is important to let this happen, to get to know each other, see and appreciate each other. The technology of war knows no bounds. Peace can only be found within us and our ability to reach out, share and understand each other.

With a healthy dose of respect for our unique cultures, I think we also need to let our borders blur. Travel helps this happen. 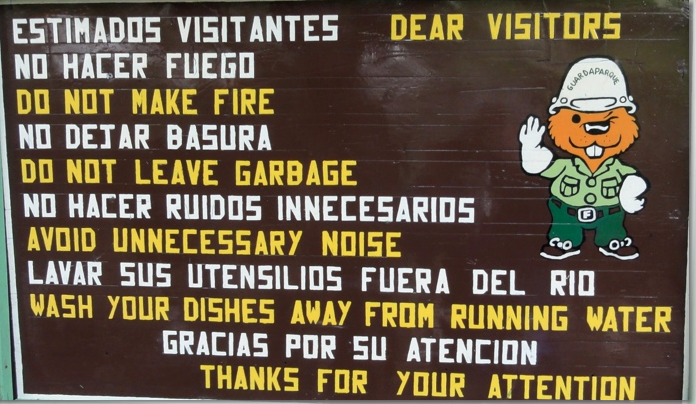 In North America it's a bear. In Chile it's the Canadian Beaver 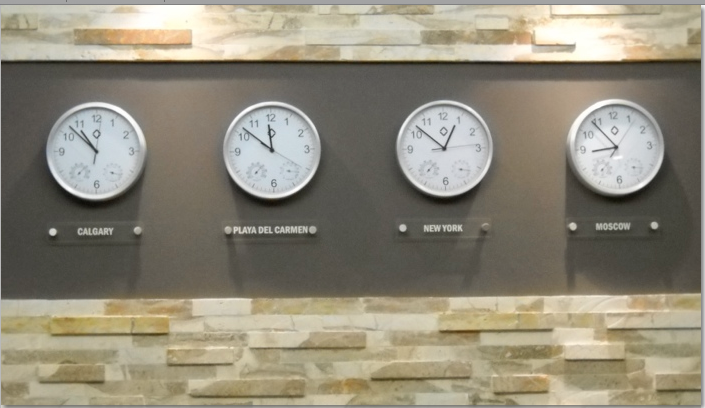 I have never before seen Calgary representing a major time zone. It made me smile.

Again, this was snapped on the fly. This time from a car window traveling through Amman, Jordan. I'd love it if someone told me what it says.