You are here: Home / How to Travel Alone / Travel Plans Change: Two Days in Dubrovnik 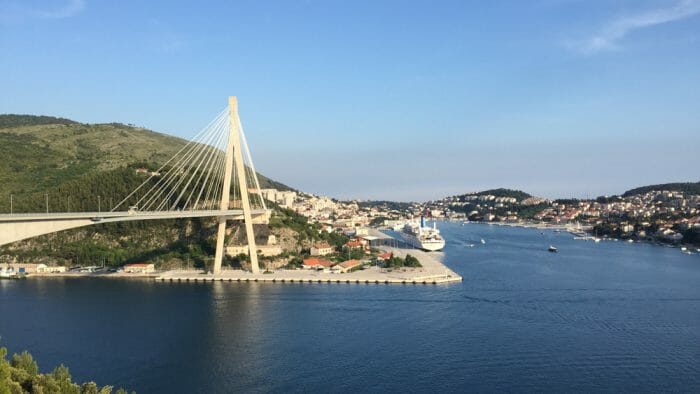 Driving into Dubrovnik. Notice where the bridge enters the city. Beyond the sight lines it continues along the upper road.

Leave a little room for spontaneity in your travel plans and you could end up in Dubrovnik.

That's what happened to me on my recent road trip around the Adriatic.

Between Lubljana, Slovenia, and Split, Croatia there were three uncommitted nights. Nothing was booked.

These nights represented a wild card destination for the trip.

It's not that I had no ideas at all for them. The tentative plan was to spend them in Plitvice Lakes National Park. Then people started sharing their opinions. So many people had already been to Croatia and had their faves to recommend. The preponderance of advice was for Dubrovnik, a full day and spectacular drive from Ljubljana.

We arrived in Dubrovnik late in the afternoon. Yes, we. As those who have been following my reports on this trip know, it was my honeymoon. And, as I say every time I mention this, the fact that I am now married will not stop me from traveling solo. Simon and I have an understanding on this point. 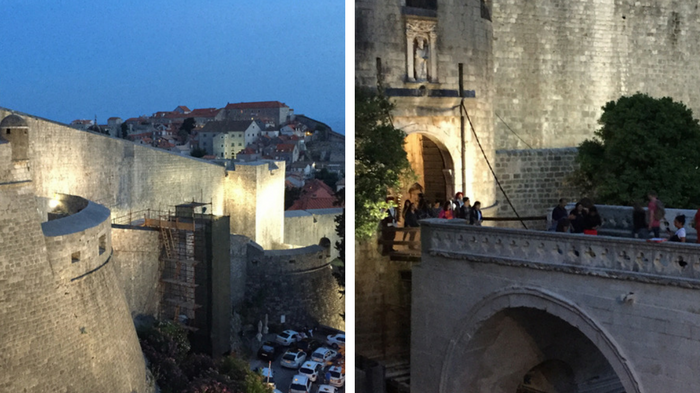 We arrived in the late afternoon so it was dusk by the time we got to the walled city. It took my breath away.

The drive from Ljubljana to Dubrovnik took a full day. Most of the drive was along Croatia's A1, a route that “traverses rugged mountainous and coastal terrain … 376 bridges, viaducts, tunnels … including the two longest tunnels in Croatia and two bridges comprising spans of 200 meters (660 ft) or more.” Source: Wikipedia. It was truly a spectacular drive.

Arriving in Dubrovnik, we first sought our B&B. It should have been simple but it was not. I need to give you the lay of the land to explain what happened.

As you enter Dubrovnik, you drive along an upper road for a few kilometers before winding your way down into the city and to sea level. As with many mountainous, coastal cities, streets are tiered to make the best use of land for homes. Our B&B sat on the top tier and was accessible from the upper road by a few dozen steps. However, Google Maps didn't see it that way. Instead of simply telling us to pull off the upper road as we entered the city, it took us on a circuitous route down into the city and then guided us back up some very steep roads with hairpin turns to the top again. Let's just say, I'm glad it wasn't my clutch that was put through these paces.

We arrived at the top totally confused. We could not see where we should go but, after asking a few people we found Maria, our B&B host. She got into the car, guided us back down the mountain, back up the main road to the upper road, and showed us where to park.

It could all have been so simple. 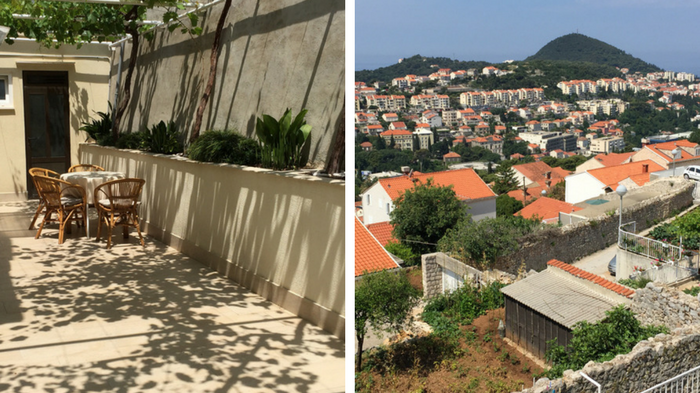 We stayed at Rooms Batina, a B&B hosted by Maria. On the left is the courtyard of the B&B. On the right is a view of the garden, housetops, and sea from the balcony. Maria served coffee on the balcony in the mornings.

The rest of our time in Dubrovnik was great. Our stay with Maria had the right balance of attention and privacy. Her balcony looking over the city and the sea is where we started and ended each day.

On the evening that we arrived, we took the winding paths down to the old walled city and through the north entrance to see it alive with activity. The following day we explored on our own and then took a fascinating tour late in the afternoon. With only 8 people on the tour, our guide was able to go beyond the standard history of the city to include her personal relationship to that history, and that of her parents and friends.

Their relationship to the city's history? Let me explain.

Dubrovnik is a UNESCO World Heritage Site. I've seen many walled cities but none so complete and well preserved. Its perfect exterior hides a very complicated past. In the early 1800s the city suffered under Napoleon including a month-long siege. It then was under the control of the Austrian Hapsburgs until the early 20th century. It was later enveloped into Yugoslavia under Tito. After Croatia declared its independence from Yugoslavia it suffered another siege under Serbia and Montenegro. This most recent history is the most difficult for people.

On our second day in Dubrovnik we spent the morning on the island of Lokrum which is a short ferry ride from the old city's port. It's essentially one large park with a botanical garden, a natural swimming hole, and hiking trails. In the afternoon we wanted to see how the people of Dubrovnik live. We took a 30-minute ride on the #6 bus to Babin Kuk. It took us along roads we would not otherwise have traveled and to a park where we watched two families celebrate birthdays. It was a peek into normal life. As you can see in the photos below, after having dinner at the Komin restaurant, we watched the sun set over the Adriatic. Then we went back for a good night's sleep and headed off to Split the next day.

For more on this trip around the Adriatic, read: 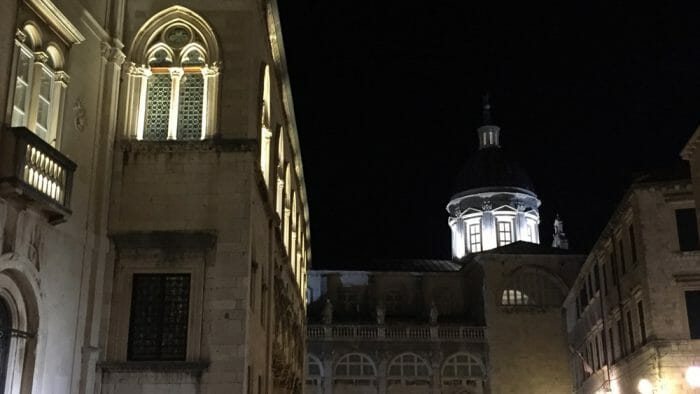 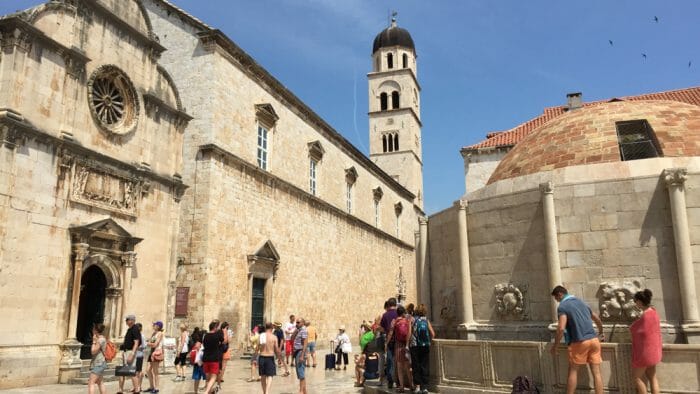 At the main entrance into the walled city 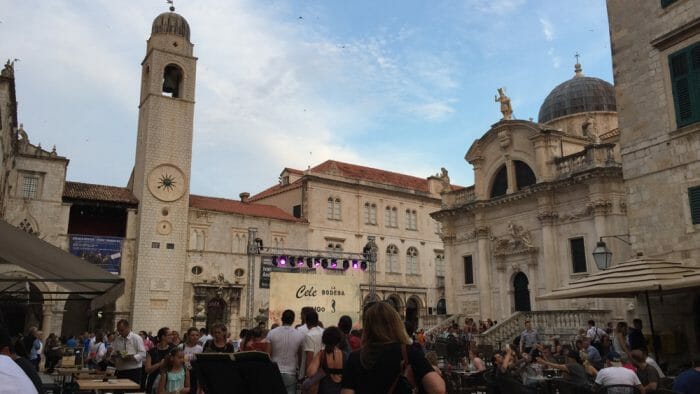 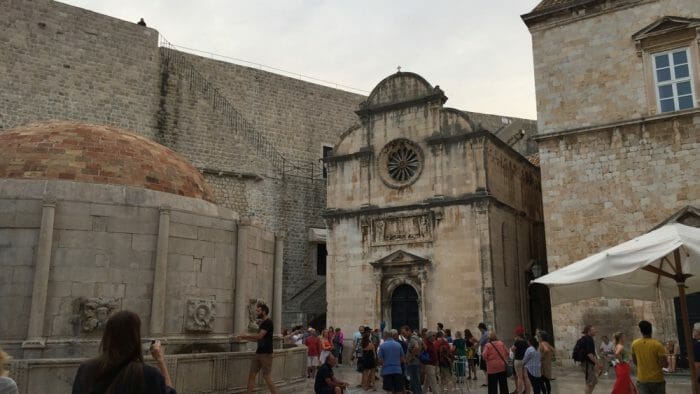 You have a good view of the wall in this photo. You are best to go early in the morning to avoid the heat. Buy tickets near the main gate to the Old Town. 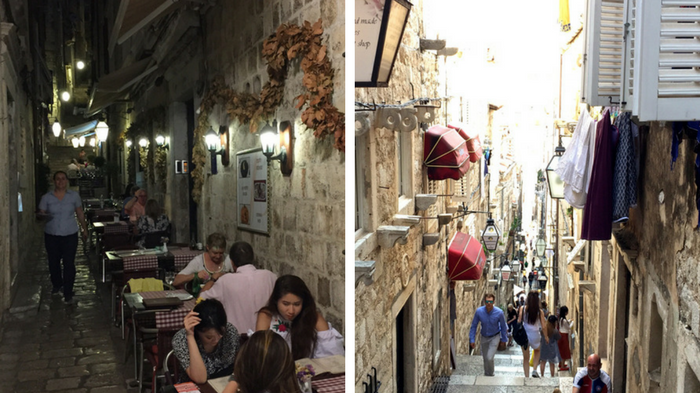 The main streets are crossed by narrow lanes. The image on the right is the street that leads to the cable car that will take you to a plateau with fabulous views of the city and the surrounding area. 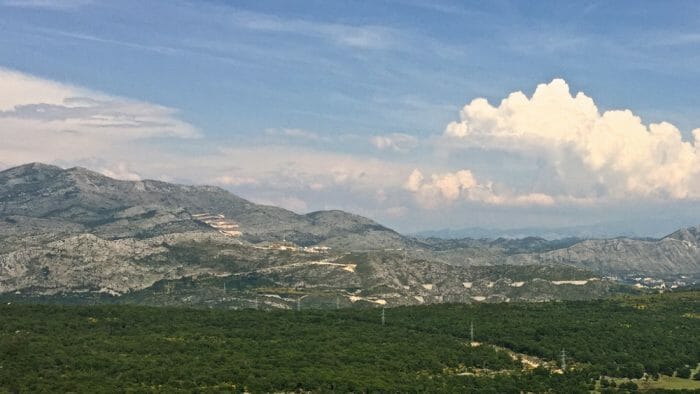 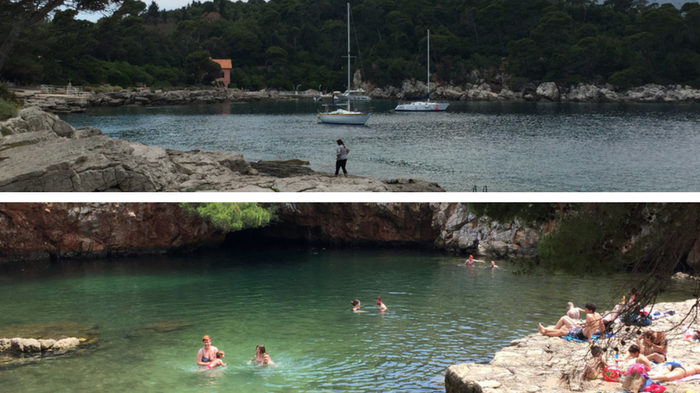 The idyllic island of Lokrum is about a 20-minute boat ride from Dubrovnik's old city. Our second day was spent at Lokrum in the morning and Babin Kuk (below) in the afternoon. 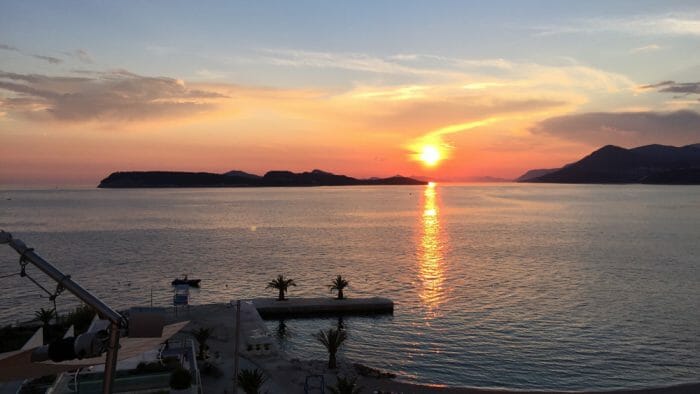 Sunset from Valamar Dubrovnik President Hotel in Babin Kuk, Dubrovnik. Babin Kuk is a peninsula that's about a 30-minute bus ride from the city center. It has a large park, hotels, and restaurants. We sat and watched two large families have birthday parties there. We had dinner at Komin restaurant, which had good food and a wonderful patio.