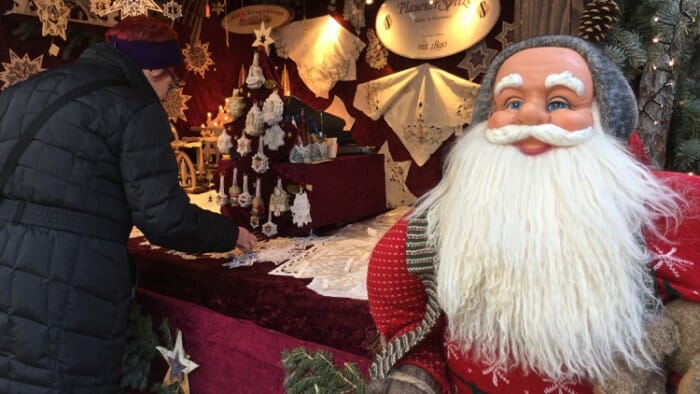 The time of year when most people say no to Europe is the perfect time to say yes to Munich.

For the Christmas markets.

Cold and yet cosy.

Of course, there's much more to do in Munich than attend markets. I'd recommend a week in Munich to visit the markets, go to the Statsoper, explore museums and do a day trip or overnight into the countryside, for example, Upper Bavaria.

I'll be writing more about my trip to Germany but before Christmas and in hopes of helping readers who will be in Europe for the holidays I thought it best to focus on the markets first. Most run to December 23rd or 24th. The Tollwood Festival which includes a Christmas Market runs to December 31st and includes a big event on New Year's Eve. I think that would be a perfect place for a solo traveler to celebrate the final night of the year. 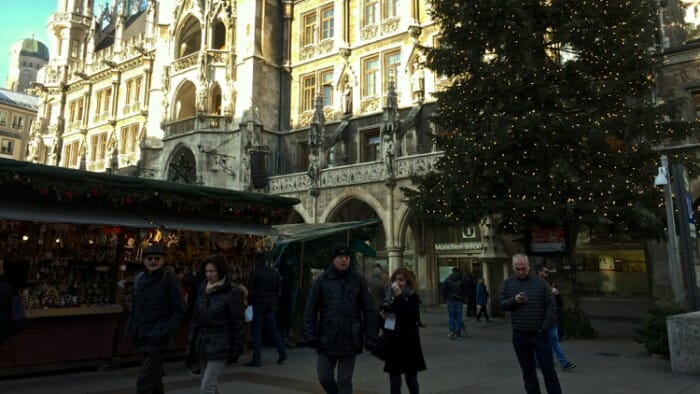 The Marienplatz Market is in front of the New Town Hall – the Rathaus. 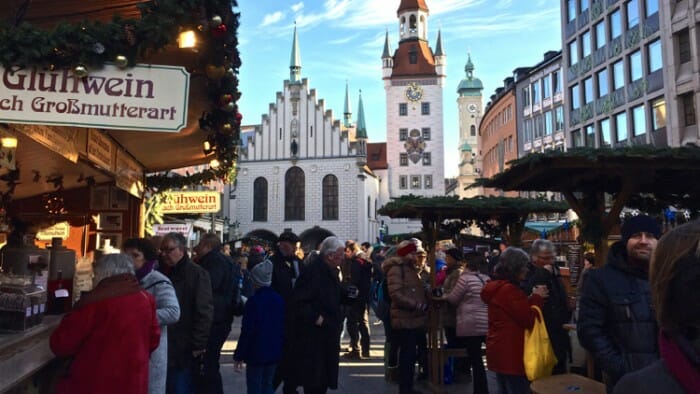 The Christmas Market at Marienplatz

Located in the city's main square in front of the New Town Hall, Neues Rathaus in German, is the Christmas market at Marienplatz. It's likely the first market you'll encounter other than the one at the airport of course.

This market is a must for it's surrounded by traditional buildings and directly above it is the Rathaus' famous glockenspiel that has 43 bells and 32 life-sized figures. Every day at 11am, two stories from the 16th century are re-enacted by the glockenspiel and every face on the Marienplatz is turned upwards to watch.

This market is a must for its location but less so for what its huts contain. Have a glass of Glühwein then wander 100 meters west along Kaufingerstrasse where you'll find a small, adjacent market specializing in exquisitely carved wood nativity scenes. 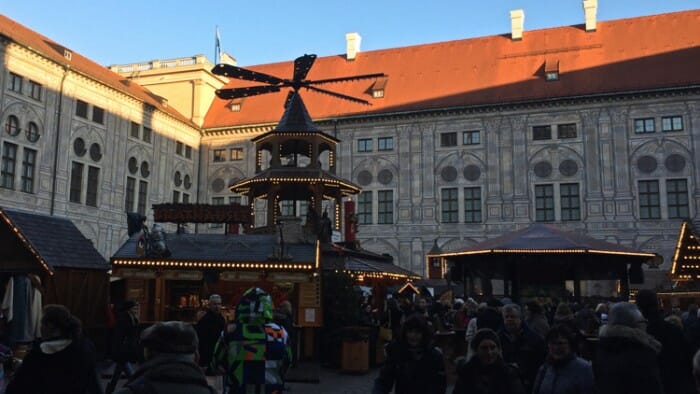 The Residenz Christmas Market takes advantage of the enclosed square of the Emperor's Courtyard. 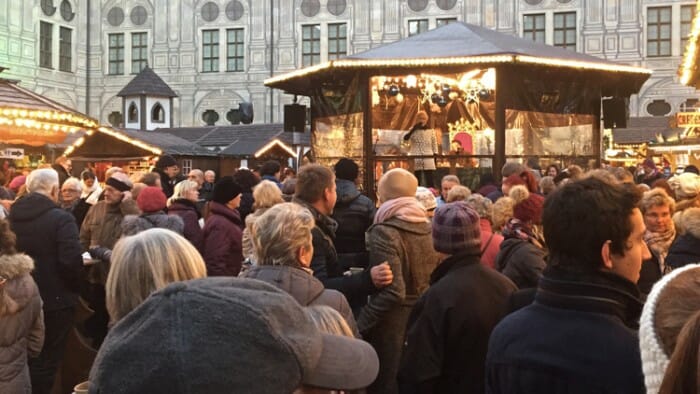 Live music is featured at a number of the markets. 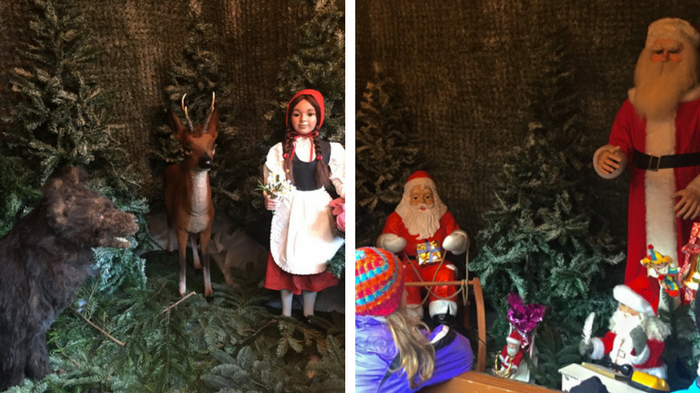 Christmas Market at the Munich Residenz

Munich is a wonderful walking city. To get to the Residenz Christmas Market from the Marienplatz market simply walk north along Residenzstrasse for about 10 minutes. You'll find the entrance to the courtyard on your right

This is a charming market tucked inside the Emperor's Courtyard of the Munich Residenz which is the former royal palace of the Bavarian monarchs of the House of Wittelsbach. Thematically, this market is anything but royal. It's a romantic view of a farming community. The Residenz market attracts families as there is a children's section that features huts with animated figures and an audio track telling the fairy tales associated with them. Children hang over the railings watching and listening to the stories. 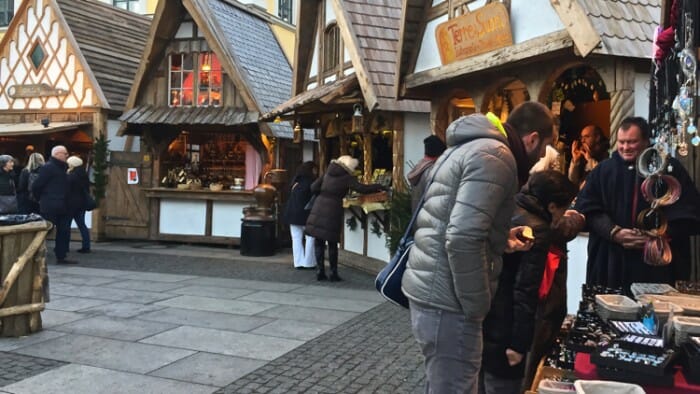 At the Medieval Market all the vendors are in historical dress. 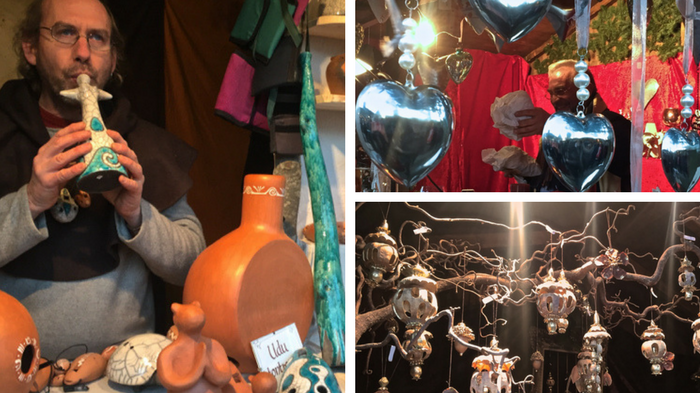 Not everything is handcrafted but much of it is. 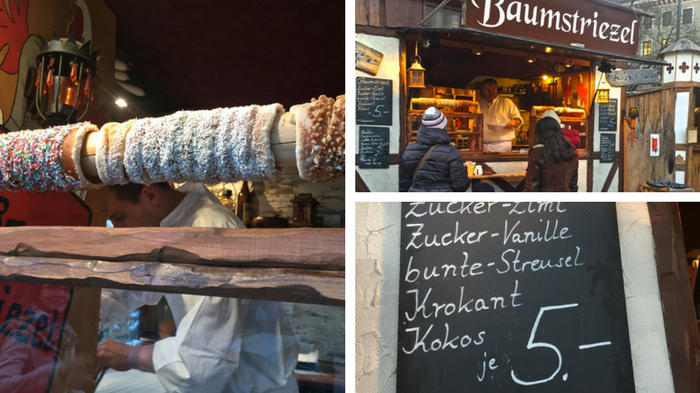 Baumstriezel is absolutely delicious. It's like a donut dough but it's wrapped around a wooden cone and cooked. Five euros is a crazy price for such as simple confection. But oh, it was so worth it!

The Medieval Market at Wittelsbacherplatz

From the Residenz Market it's just another short walk to the Medieval Christmas Market at Wittlesbacherplatz. Simply cross the street from the entrance to the Residenz, veer north for Briennerstrasse, and walk west along it for about five minutes.

As the name would suggest, this market harkens back to the early days of Christmas markets. The vendors are in medieval costume and the huts are little more traditional than other markets. I found more handmade items in this market. It may have been the time of day but the vendors seemed more chatty as well. This market is also known for great food though most of it is meat and I'm a pescatarian. 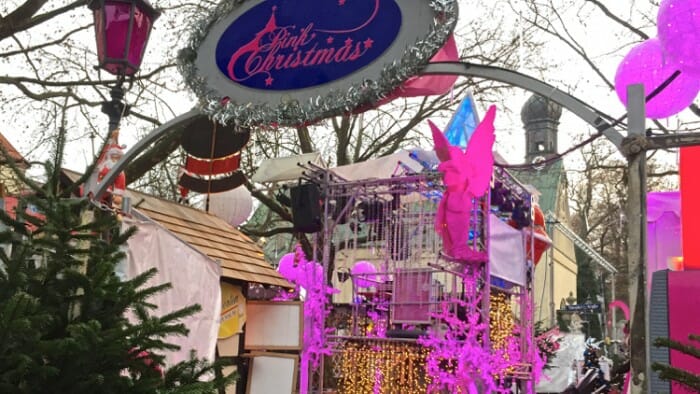 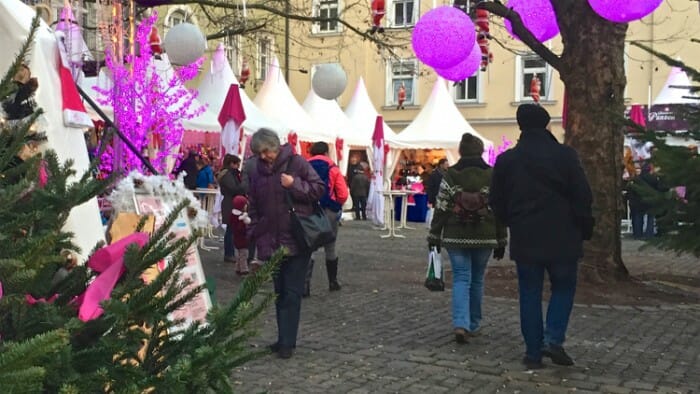 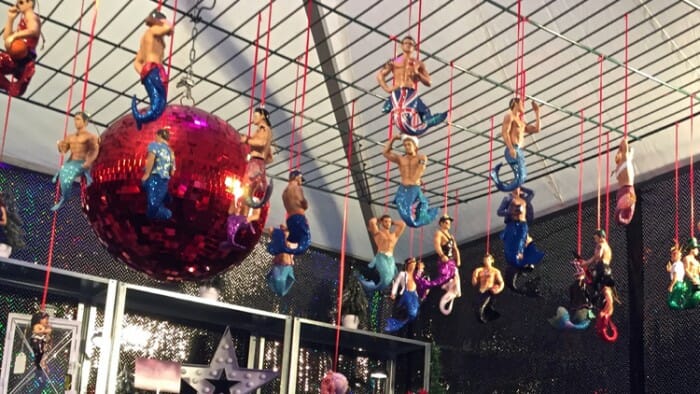 These mermen are collectible Christmas ornaments. They are available on Amazon.

The Pink Market at Stephansplatz

A relatively recent addition to the Munich Christmas Market scene is the Pink Market. Held in Stephansplatz which is in the heart of Munich's LBGTQ community. This is a small market that has been running for 10 years but this is the first year that it will be held for more than a few days. It's running until December 23rd and is open every day from 4pm to 10pm.

Due to my schedule I was there in the afternoon but the evening is the best time to go. The market is busy, it has a pink glow and they have drag shows and other entertainment. This is a welcoming market for everyone. 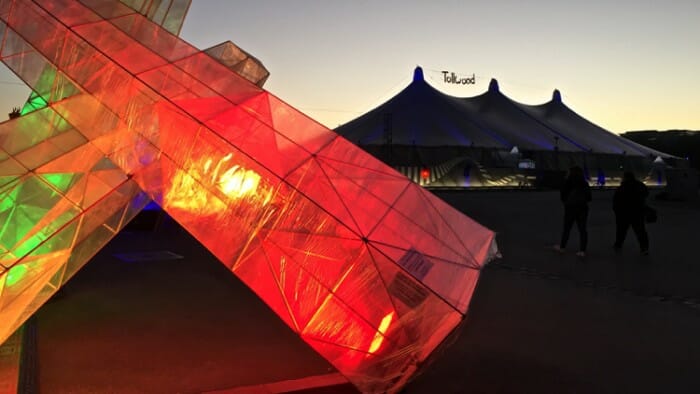 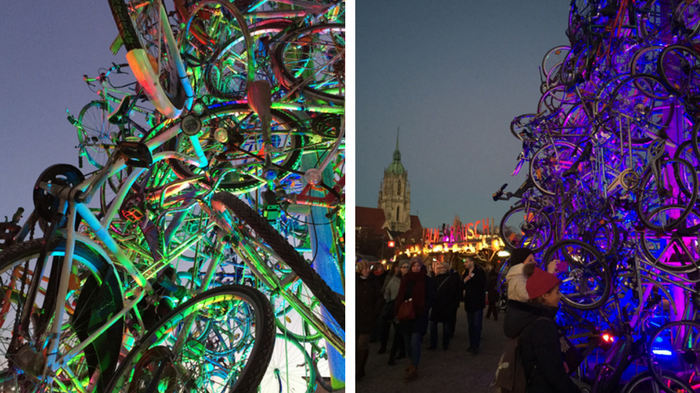 The Christmas Market at Tollwood

Tollwood is a festival that takes place semi-annually, once in the winter and again in the summer. The festival attempts to connect the cultural offerings of music, theater, cabaret and art with an ecological consciousness. The winter festival includes a Christmas Market.

Getting to Tollwood will require you to take the U-Bahn for about 10 minutes from Marienplatz but once you're at Theresienwiese station on the U4 or U5 trains you'll find the event within sight of the exit. The festival runs to December 31st and reportedly puts on a fantastic New Year's Eve event.

I went to Tollwood in the evening. After a day of Christmas markets, shopping was not high on my list however I did fine a pair of earrings to purchase. I spent most of my time in the large tents of the Weltsalon which focuses on pressing social and ecological issues and the music tent that has almost continuous life music. There was so much to see at Tollwood that I'll be dedicating an entire post to the event soon. 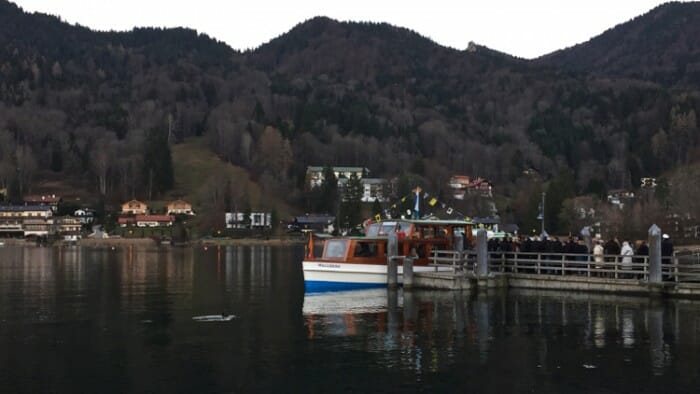 There are five towns on Lake Tegernsee and each has a market. You can tour them by boat. 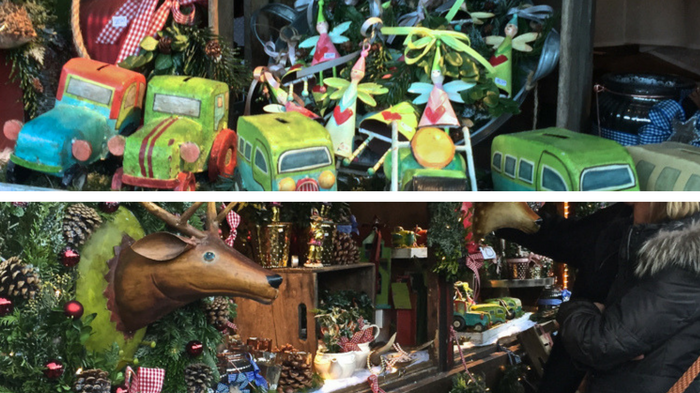 Almost all the products at the Rottach-Egern market were made locally. 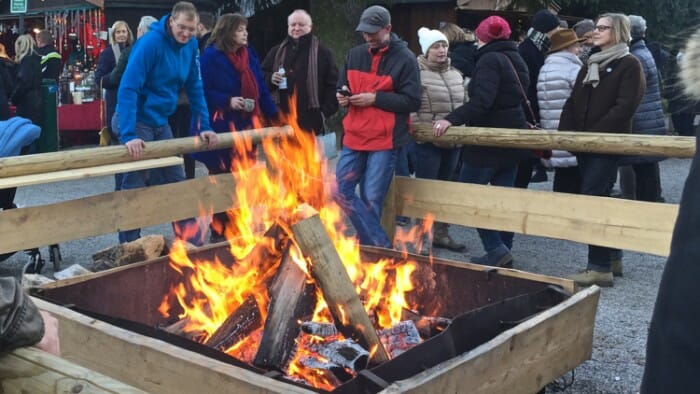 A chance to warm up.

Tegernsee is south of Munich in Upper Bavaria. There are numerous trains each day to the area. The ride last about 1 hr, 20 minutes. It's a gorgeous area and a great getaway from the city for a day or a few days.

The market I visited was in Rottach-Egern but Lake Tegernsee offers more. You can take a boat to each of the five markets in the five villages on the lake. Be prepared to line up for the boat as it is a popular activity but what an extraordinary Christmas market tour.

The Rottach-Egern market it small but very social. For locals, Christmas markets are not so much about the buying things but of meeting family and friends over a Glühwein and a bratwurst, chatting and having fun.

So that's the list of markets I visited in the Munich. There are more. The one that I would have dearly liked to attend is the Schwabing market which is considered the artist's market. I thought it would work into plans but a late opening spoiled my plan.

There is much, much more to tell you about Munich. I've already planned a trip there for my sister for next year. I'll write a post soon and share her itinerary with you.

I have the German National Tourist Board to thank for my trip. As always, the opinions are absolutely my own.