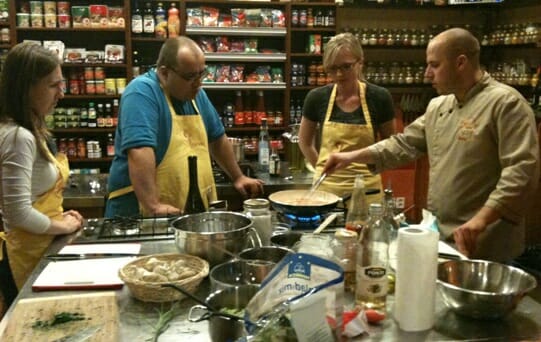 Such a lovely setting for my cooking class.

Social media is a funny thing.

While planning a recent trip, I turned to my twitter followers for suggestions about where and what I should eat and drink while traveling solo in Prague. By the time my plane landed, I had received a number of helpful responses… and one invitation.  “Welcome to Prague,” it read. “My name is Simona. I would be happy to treat you to lunch.” How lovely!

This was quite a contrast to my first visit to the Czech capital, when I had not been successful in connecting with anyone. I had left Canada with a vision of somehow magically finding myself around a communal table drinking Pilsner late into the night, talking politics and world affairs with a group of locals. But I had no idea how to make that happen.  It was only a few years after the Velvet Revolution.  It was my first trip to Europe, I didn’t speak the language, I wasn’t familiar with the culture… the border between us seemed impenetrable to me. But those were different times, I was a different person, and Prague was a different city. 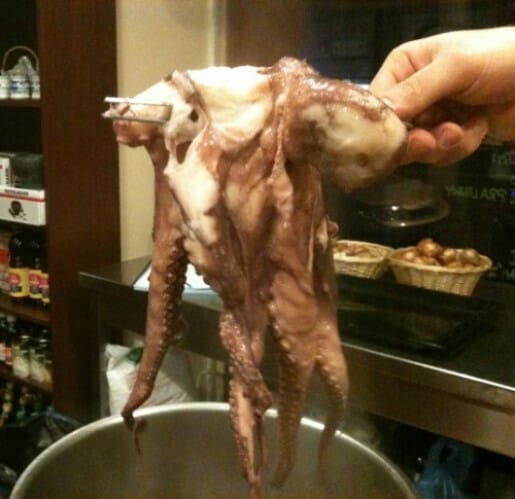 This trip would be different. I contacted Simona, who turned out to be a co-owner of Prague Private Dining, a free online restaurant search and reservation service. Instead of lunch, she invited me to attend a cooking class. Knowing that this is a great activity for solo travelers, and with such fond memories of learning to make paella in Barcelona, I immediately accepted.

On the appointed evening, I found my way to Chef Parade  in Prague 3, Zizkov. Over the next 3 or 4 hours, my 4 classmates and I chopped, stirred, sautéed, baked and simmered our way through a wide array of fish and seafood, under the guidance of Chef Ludek Munzar. We cooked things that I have always enjoyed eating, but have never attempted at home: whole fish baked in a salt crust, squid ink risotto, marinated octopus salad (beginning with a huge, slimy, whole octopus!) and an interesting version of bouillabaisse that involved straining out all of the expensive ingredients, and adding a generous amount of ouzo. Oh, yes. 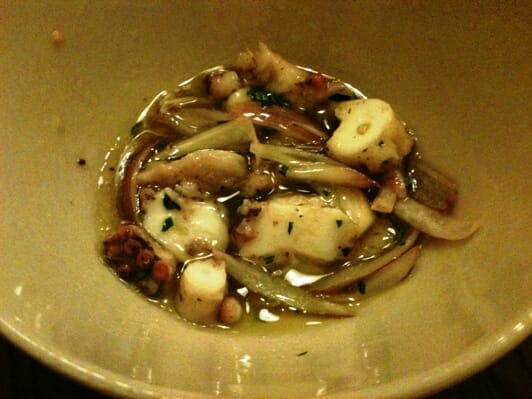 I have always believed that food is in some way a universal language. I had never actually put it to the test, though…until I found myself in a beautiful cooking school in central Prague, taking a class conducted entirely in Czech. Given that the sum total of my knowledge of the language would be used up in the process of ordering a beer – Dobry den. Pivo. Prosim. Dekuji. – this presented a bit of a challenge.

It soon became clear exactly how much of a challenge this would prove to be. I was watching everyone intently, trying to follow along by mimicking their actions, and anticipating the next step. But the collective sucking-in of air that followed the “thwack!” of my knife hitting the board, sending the tail of my fish sliding across the table, indicated that I may have overshot the mark. Time stood still as I slowly set the knife down, while the entire class stared in silence and I blushed with embarrassment.  This, I thought, is going to be a long night. 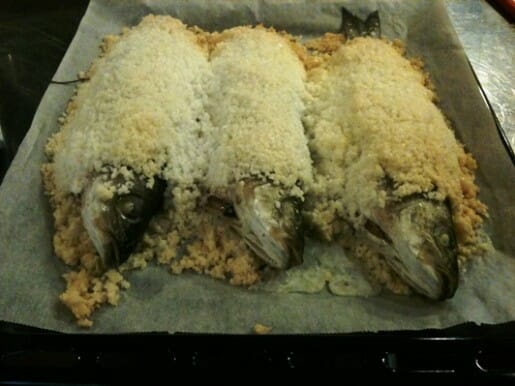 Missing a tail? Nothing a little egg white and a lot of salt can't hide!

Then, an amazing thing happened: we all began to laugh. My weird hacking off of the fish tail broke the ice. From that point on, Simona translated any vital instructions from the chef.

This, I am certain, kept us all safe that night!

We all sat down at a communal table and shared the fruits of our labour. There were no political discussions, no late-night drinking. This was even better. Without a common language, 5 people worked side-by-side for hours – taking turns stirring the risotto, sharing kitchen tools, cleaning shrimp and mussels, and yes, relieving a fish of its tail – to create a meal that we then enjoyed together. My very accommodating new friend translated some of the conversation at the table so that I would not feel left out. There were lots of smiles served up along with delicious food that night. Somehow, I had cracked the code that had eluded me on my previous visit. The border that had seemed so clear was now blurred.

While I wouldn’t trade this unique experience for another, next time I will try one of the Czech Cuisine classes that Chef Parade offers for tourists. In English.