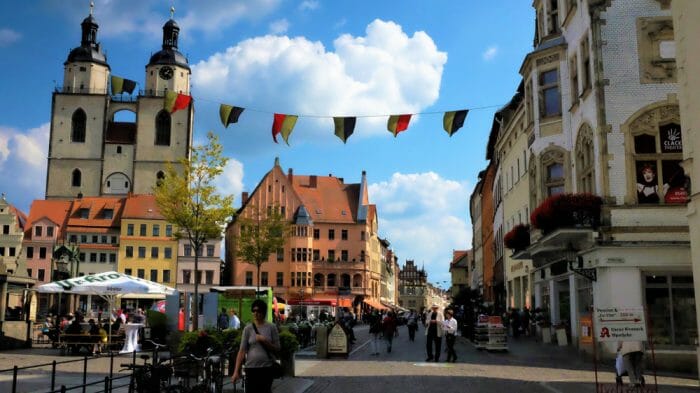 2017 marked the 500th anniversary of the Protestant Reformation.

The Reformation began with theologian Martin Luther publishing his 95 theses, a list of questions and propositions for debate, to the door of the Wittenberg Castle Church thereby confronting the institution of the Catholic Church and beginning Protestantism.

As a history nerd, I was beyond excited to see the places affected by this revolution, not just through words in a textbook but with my very own eyes.

When I arrived in Germany there was evidence of Luther everywhere. There are towns which are given the moniker Lutherstadt before their name (Lutherstadt Wittenberg, for example). There is the Lutherweg which is a four hundred kilometer walking trail that goes through the many cities impacted by the Reformation. And in the gift shops, there are Luther-themed socks, chocolates, wine, beer, Luther-shaped pasta, little Playmobil Martin Luthers, Che Guevara-styled Luther t-shirts, and, my favorite kitschy Luther item, Katharina Luther (Luther's wife) perfume No.95 (get it…like the 95 theses).

More importantly, there is evidence of Luther's impact on German history. His seemingly small act of publishing his theses destabilized the supremacy of the Catholic Church in the country and created regional conflicts that lasted for hundreds of years. I could see his effect everywhere I went.

Little villages like Jüterbog saw their monasteries emptied as monks left to join the Lutherans. In other places, new churches were built like the Castle Church in Torgau, to help establish the new faith. The cities of Halle and Leipzig became the birthplaces of Protestant music. Wittenberg and Eisleben embraced their famous son, developing museums specifically about Martin Luther and his actions. To see the important churches, museums, libraries, and musical hubs related to Luther, I needed to visit each of these places. 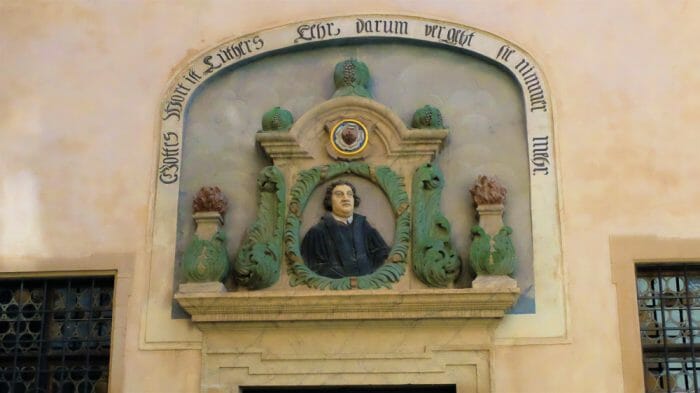 Martin Luther's Birth House, a museum in Eisleben, opened in the 17th Century.

In the town of Eisleben (pronounced: Ice-lee-bin), the place where Luther was born and died, I stayed at the Hotel Graf Von Mansfeld. Luther rested his head in this same inn in the 16th century!

The town has museums in the houses of his birth and death. On one of his preaching tours in 1546, Martin Luther suffered a heart attack and passed away unexpectedly dying in Eisleben. Both house museums are interactive and surprisingly modern, especially given that Luther's birthplace museum opened in 1693! At his death house museum, I finally succumbed to the urge to buy something kitschy from the gift shop and picked up a 7€ bottle of Luther wine (which wasn't half bad!).

While there, I went on a morning run along the Lutherweg trail. It's strange to think that as a child, Luther could have been running around in those fields himself. 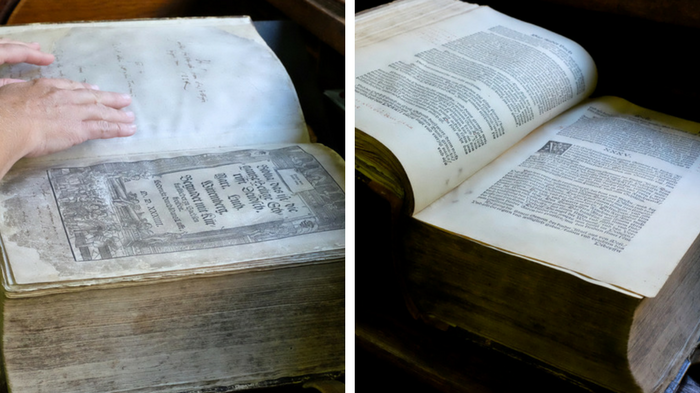 The librarian of the Marienbibliotek of Halle showed us this bible printed in 1534. It was dedicated to the owner by Martin Luther himself!

My most exciting experience of this trip occurred in the wonderful medieval city of Halle in Saxony. It was there that I visited the Marienbibliotek on a private tour. To my surprise and delight, the librarian removed an enormous tome from its glass enclosure display. She revealed that it was one of the first bibles ever printed with Luther's translation. It was made in 1534. She opened the book to the first page and beneath the title was a dedication written by Martin Luther himself. I've never seen any book that old, that close. The bibliophile in me was freaking out!

The rest of Halle also proved to be spectacular. It's a city famous for being the birthplace of the composer George Frederick Handel and its largest square has a statue commemorating him. I arrived on a day when a farmer's market filled the square so I picked up some currywurst to eat as I walked along the roads, gazing at the many medieval half-timbered homes.

I then went to the same Marktkirche church where Handel was baptized and learned to play the organ. This same church also holds the death mask and hands of Martin Luther, tucked away in a separate room that you need to request to visit. Having someone with you is probably a good idea because when you enter the room, a disembodied set of hands and face are staring at you and it's terrifying. 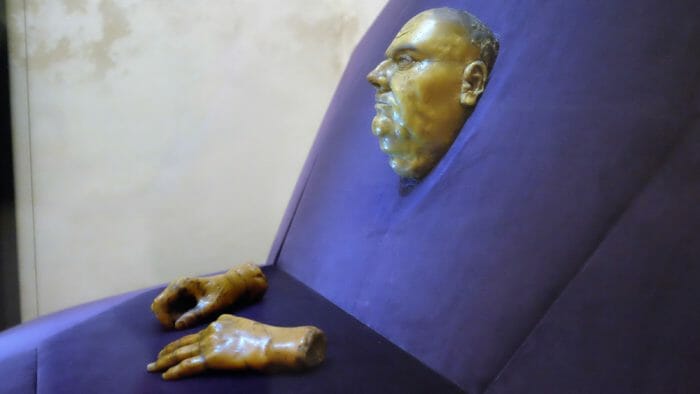 The creepy death mask and hands of Luther in the Marktkirche in Halle. 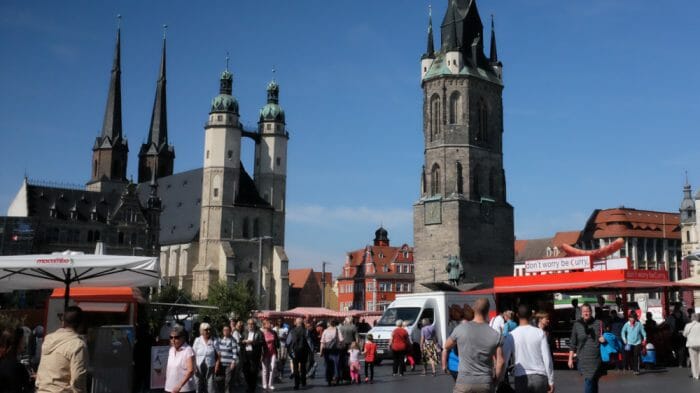 The town square in Halle on Market Day. 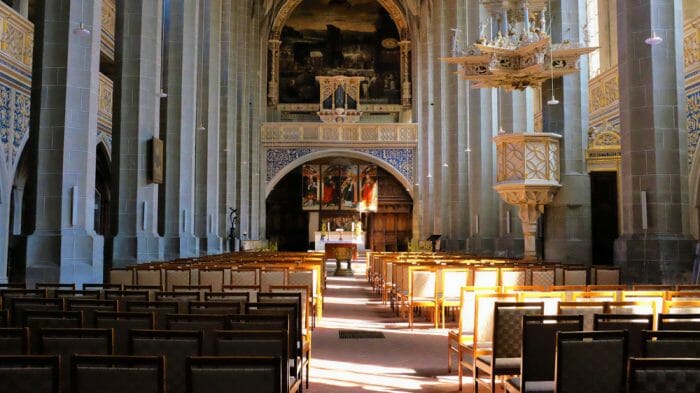 The interior of the MarktKirche in Halle where Handel was baptized! 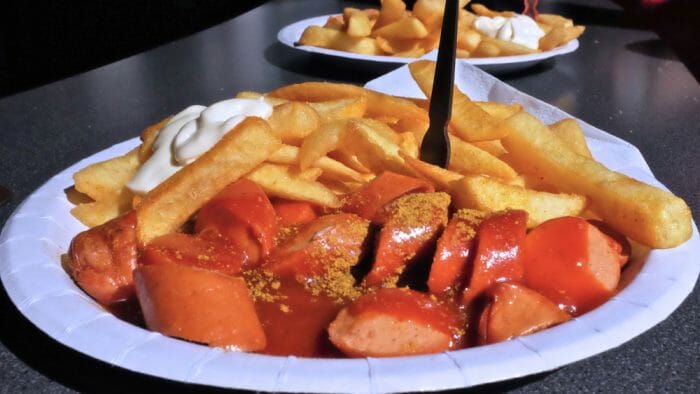 I picked up some Currywurst in the Halle farmer's market.

Museums and Churches and more Museums!

In Torgau, I went to a museum of Katharina Luther's home and another small museum which was a mostly untouched Gothic-era building. Nearby, in the impressive Schloss Hartenfels, there's a painting of Luther speaking from the pulpit of the first church created for Protestants in 1544. After seeing it, I walked across the castle courtyard to the church itself and saw the same pulpit he spoke from. It feels almost like time-traveling to walk in the same place shown in a painting made hundreds of years ago.

I was excited to next visit the most famous site in the whole history of the Reformation, the Schlosskirche church door in Wittenberg where Luther is alleged to have posted the 95 theses in October of 1517. The wooden door itself has been replaced with a brass one with inscriptions of each of the theses.

The entire city was decorated for the summer of the Reformation, flags hung from buildings and flower pots were everywhere. Even though the weather was perfect for relaxing in a biergarten. I spent many hours indoors in the Lutherhaus museum, the largest Luther museum in the world, which is built inside the preacher’s home. I’m glad I did as otherwise, I wouldn’t have been able to see as many primary documents, paintings, and relics from the time. 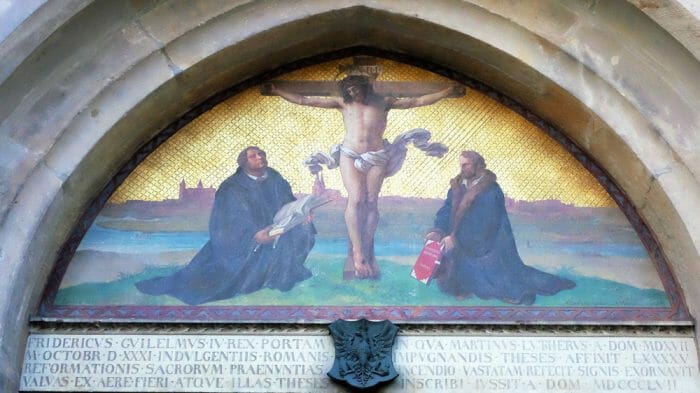 The brass door of the Schlosskirche inscribed with the 95 theses in Wittenberg. 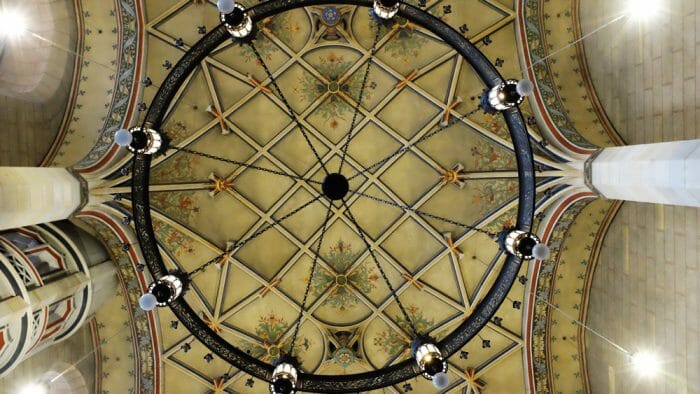 The interior of the Schlosskirche in Wittenberg is stunning with its gorgeous vaulted ceilings. 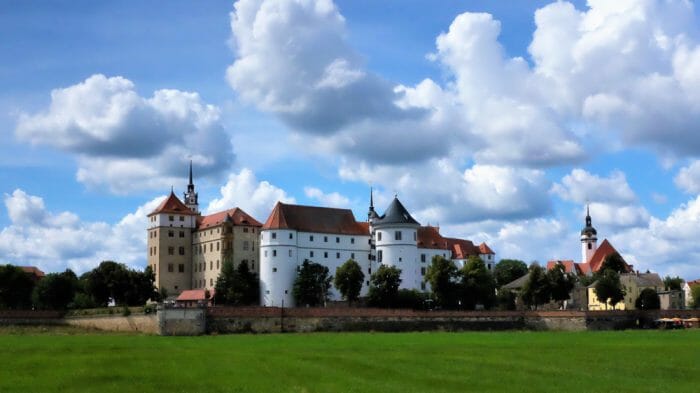 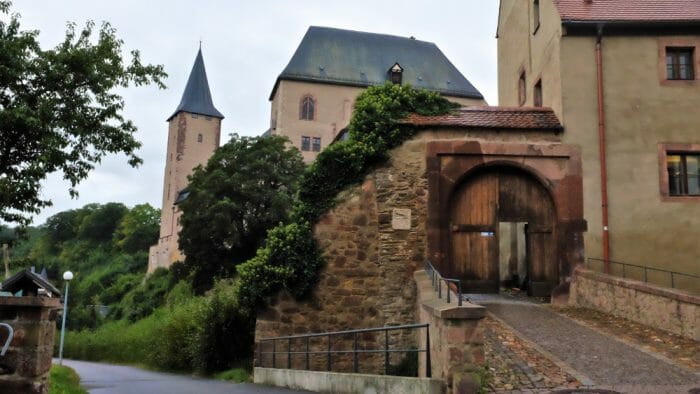 The lovely Schloss Rochlitz on a dark and stormy day.

Listening to Bach in his Hometown

I finished my tour off in Leipzig where I saw a more practical application of the Reformation – how Protestantism was spread through music. I learned how Johann Sebastian Bach, who comes from Leipzig, wrote hundreds of cantos using Luther’s German translation of the bible. I had the immense privilege of listening to the St. Thomas Church choir sing a Bach canto that was made using Martin Luther's words. I did so while sitting a mere twenty meters from where the composer lies in rest.

I had no idea that Leipzig was the musical home for so many famous classical composers. It's where Wagner was born, and where Mendelssohn lived for many years, popularizing Bach’s music.

By the end of my trip, my mind was full of Reformation history and my body was just as full of Saxon rolled beef, Schnitzel, and Thuringian potato dumplings. I’m still amazed at how much of Germany is filled with such vivid history. Battles in the name of religion were fought at the castles I visited, fiery speeches were shouted from the pulpit in the tranquil churches I walked through. Now there are decorations at the door in Wittenberg where a revolution began that tore the country and Western Europe apart. What was once the most traumatic event to happen in Europe since the fall of Rome is now an enormous celebration, best enjoyed with a large pint of Luther beer. 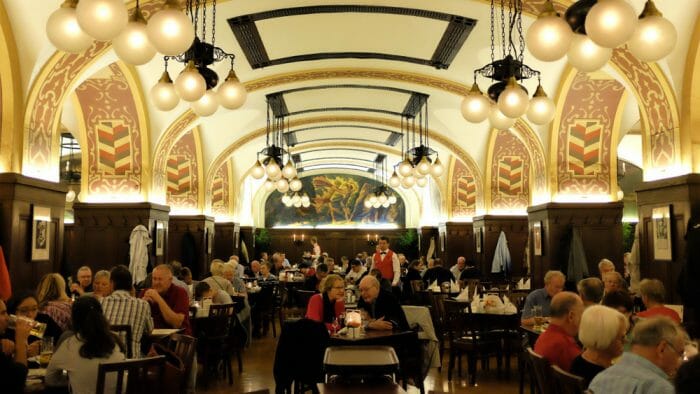 I enjoyed a dinner at a cellar restaurant in Leipzig that Luther used to frequent. 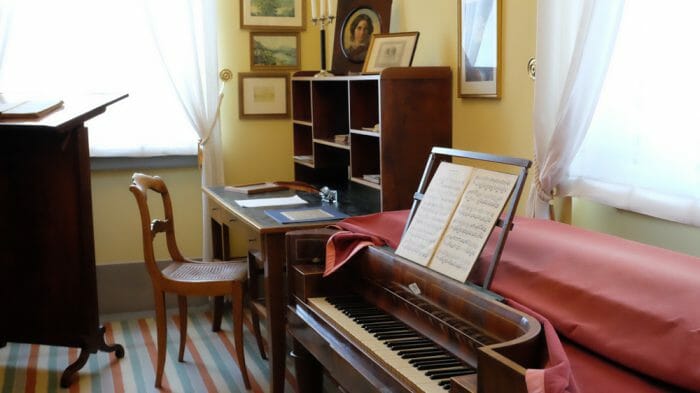 Leipzig is such a musical city – home to Wagner, Bach, and Mendelssohn (to whom this piano belonged). 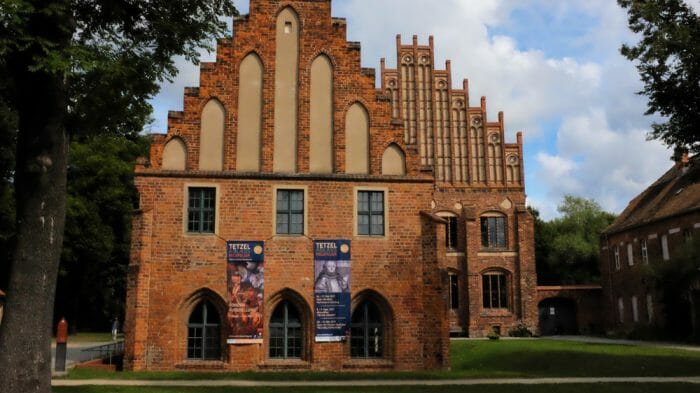 The Zinna Monastery in Juterbog was emptied in the 16th Century but the distillery replacing it is still fully functioning! 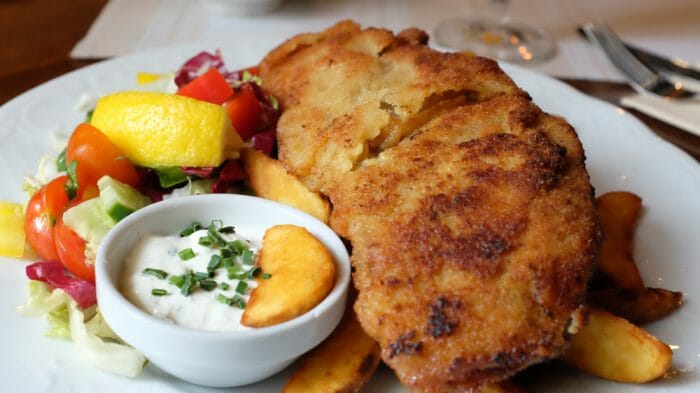 Delicious beef schnitzl at Kloster Nimbschen beside the convent that Katharina Luther attended before she left to join Luther.

This post was brought to you as a result of the Luther Country campaign, created and managed by iambassador in partnership with the German National Tourist Board. As always, Solo Traveler retains all editorial control of what is published.